Two weeks ago, we started to look at Daniel Williamsâs Deadsands setting from the second Great Designer Search. After a lengthy discussion in the comments, we ended up with more alternatives to the old showdown mechanic. This week, weâll hope to pin down the cornerstone of this world for good and see how that decision impacts the rest of the set.

First off, Jay Treat shared the idea he came up with for a new showdown implementation last December:

Duel an opponent. (To duel, you each draw a card and then choose a card from your hand. Reveal them. If the card you chose shares no card types with your opponentâs, you win the duel. Discard the chosen cards.) 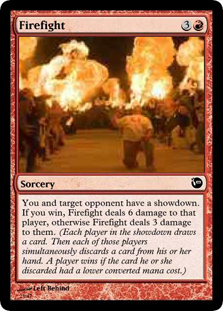 The first shift is the name. Duel is more setting-neutral, but the game of Magic that youâre playing is also a duel. Both duel and showdown have similar connotations, so naming is probably an issue that can be left for creative to sort out. As for the gameplay elements this version brings to the table, by eliminating the mana-cost issue altogether, it offers most of showdown Version 4âs improvements while getting rid of the numerous ties. Unfortunately, it still punishes the player using it for trying to win duels. Both players want to discard lands in the late game, so the player trying not to match card types will often have to ditch a spell for a better chance at victory, thus leading to the same mana-flood problems showdown Version 2 had.

That thought begged the question of which player should be incentivized to mismatch the card types (and thus discard spells more often). What if we switched it?

Duel an opponent. (Each player in the duel draws a card, then discards a card from his or her hand. You win if the discarded cards share a card type.)

This version of duel is good for the user more often, but it can cause a lot of unfun game states for those playing against it. That is to say, duel Version 2 is to duel Version 1 as hexproof is to shroud. So, the choice comes down to whether itâs more important for duel to be all-upside or for it not to grief everyone who plays against it. My inclination is to go with Jayâs version, but I can see arguments for either.

Regardless of which way you go, duel has an interesting feature that showdown doesnât: No card is best at winning a duel. That means, as Wobbles pointed out in last weekâs comments, we could use an implementation that doesnât require a discard:

Duel an opponent. (Each player in the duel draws a card, then reveals a card from his or her hand. You win the duel if those cards donât share a card type.) 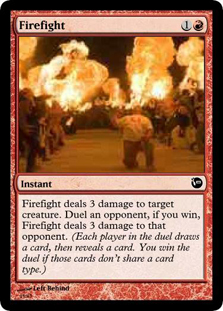 This version is great in that it circumvents the problem of making players lose out on their spells altogether, but the lack of discard isnât quite as safe as it looks. What exactly is your opponent supposed to do if you have a planeswalker in Limitedâor even an enchantment? The issue probably isnât big enough to derail the new iterationâthat player can only guarantee victory in the duels he initiatesâbut Iâd rather make the player who starts the duel need to match in the discard-less version. That way, heâs less likely to hold his trump since he doesnât know if his opponent has any more ways to duel.

Duel an opponent. (Each player in the duel draws a card, then reveals a card from his or her hand. You win the duel if those cards share a card type.) 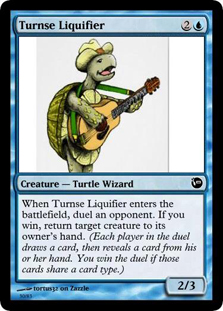 This particular card could then be used as some sort of bad Vision Skeins, which is probably getting a bit too cute, but keeping hands fuller than normal should lead to more dynamic duels up to a point.

When I think about any of the hand-based showdown iterations, one of the first impacts that come to mind is that information about your opponentâs hand becomes more valuable. R&D has deemed a Telepathy land too annoying, but in this sort of environment, a weaker version could be worth playing. 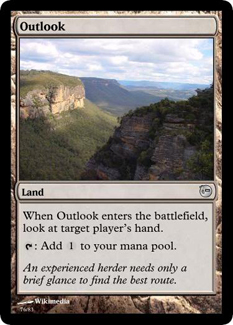 .â.â.âwhich doesnât mean we should print one. This design allows its user to make more informed decisions about what to duel with, but it also can make the target feel hopeless, even though he can still win. Every time he sees that an opponent could win a duel, it might discourage the player from initiating one in the first place.

Perhaps some more subtle manipulation is in order. With our latest iteration, lands can make for more matching pairs than one might at first expect, but we can change these card-type ratios by including minimal effects. Take, for instance, these two appropriate reprints: 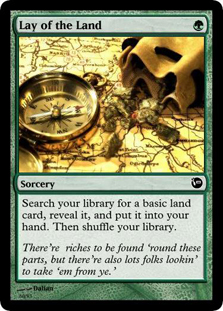 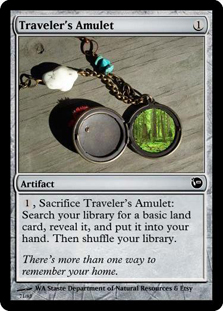 Creatures are the next biggest component, but we could similarly reduce their numbers by Increasing Devotion. Then again, whoâs to say that things will match too often? If play-testing shows too few overlaps, we could raise our artifact-creature count, choose not to make many common Auras, and encourage players to hold excess lands in hand by printing Mind Rots.

Aside from adjusting how often duels go one way or another, we need to work around the fact that players are going to see a lot more cards than they normally would in a Limited game. Bomb rares might need to be toned down since theyâll show up in a larger percentage of games, but that hurts their casual appeal. The better solution is probably to up the removal count a bit so that players donât just die to bombs immediately, in which case, we need to make sure that creature decks have enough resilience to not drown in a flood of removal spells. One option for them would be to run fewer lands so that theyâd draw more creatures than their opponents have removal spells, but we can also limit an all-removal deckâs effectiveness the same way that Dark Ascensionâs development team did: make the removal clunky. In an environment full of Death's Caresses, Savannah Lions starts to look a lot more appealing, and Serra Angel a lot less so.

The Spirit of Exploration

Iâd be perfectly happy to stop here and continue with a set design with duel Version 4, but a big part of Magic design is going beyond adequate and making things the best they can possibly be. It just so happens that Wobbles explored a few more paths in last fortnightâs comments. One option is to move away from duels at high noon entirely and look to poker for a central mechanic. I think itâs less emblematic of the setting, but he had some interesting concepts for flushes and whatnot that are definitely worth checking out.

What excites me more is a whole new direction he took showdown in:

Quick-DrawâReveal CARDNAME from your hand: Target creature gets +2/+0 or -2/-0 until end of turn. (Play this ability only once. This card stays revealed.)

Quick-draw takes the duel from being a single, tense moment to a flurry of back and forthâsomething akin to the chain of responses that Daniel was looking for in his third showdown implementation (which granted a bonus if youâd cast the most spells on a given turn).

This mechanic excites me a lot; I hope it has dynamic and fun gameplay, and it looks like it does, but I mostly want to make a bunch of clever instants with it. 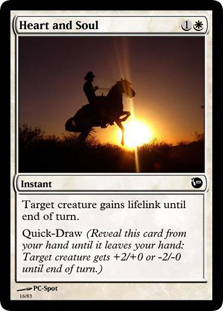 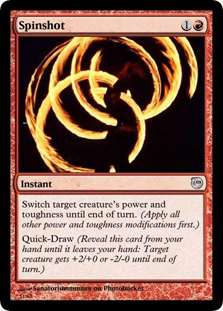 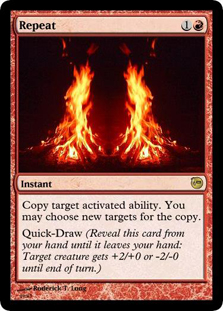 This is, almost certainly, the wrong approach. A couple of effects like this might be okay to make for some cool moments of discovery, but quick-draw already covers the instant-speed-tricks end of the spectrum. We may want more instant-speed interaction than usual, but players still ought to be doing something on their own turns. The entire point of not attaching a mana cost to quick-draw was to allow these spell-slinging matches to take place in the context of a game of Magic rather than letting the subgame take over. We want more of this: 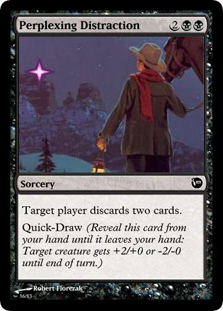 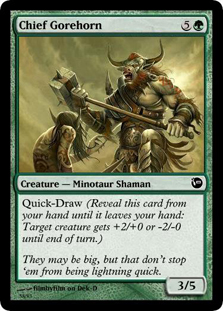 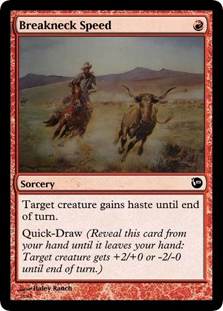 Itâs not as though these designs donât take advantage of quick-draw, itâs just subtle enough that new players wonât feel bad for missing it. All three cards want to be cast late-game, but revealing them mitigates their effectiveness because your opponent will hold lands, sandbag removal and tricks, or hold back blockers as appropriate.

Regardless of the card itâs attached to, quick-draw has me concerned from a power-level perspective. Bull Rush wasnât great, but neither was it completely unplayable in Limited, and every card with quick-draw has a Bull Rush that costs neither a mana nor a card and has added versatility attached. Iâm afraid that this could lead to a lot of Immolating Souleaterâtype gameplay, so players would be forced to chump everything or risk death on every attack.

Normally, thatâs Developmentâs realm and wouldnât be an issue, but the fact that having no cost attached to the ability is central to its design means that they have a lot less room to play with it. Yes, they can reduce the bonus to +1/+0 and -1/-0, but by knowing which form itâs going to take in Design, weâll know whether netting another use out of your quick-draws is worth working for. A Brainstorm effect is really cool when it means 4 more points of power alteration, but when each card only trades for 1, itâs more productive just to figure out how to shuffle away bad cards.

The +1 or -1 route also makes building creature curves tough because we need changes of 1 power to kill and save creatures. 3/1s and 1/4s coexist well, but neither size allows for Grizzly Bears, which are begging to fight 2/3s, and 2/1s with 1/3s is a different beast entirely. Most sets get to use a nice, wide range here, and trying to make +1 or -1 power relevant is a huge design constraint.

Besides changing creature sizes, quick-draw allows us to interact with cards in hand in a whole new way. For instance, we could include a hoser for the mechanic as a sort of Meddling Mage. 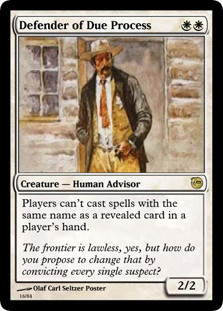 On the other end of the spectrum, we can reward players for having revealed cards. That said, we donât want something like this: 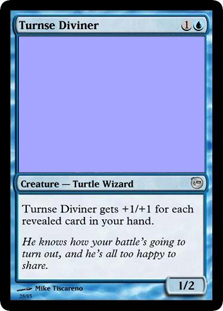 Saviors of Kamigawaâs wisdom mechanic (Secretkeeper) taught us that encouraging players not to cast spells can only lead to less fun games. We could make it trigger when you revealed a card, but Iâd like to take advantage of the fact that the cards remain revealed indefinitely with something closer to Secrets of the Dead: 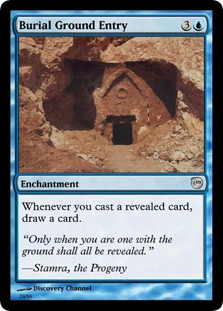 Itâs possible that this should specify âfrom your handâ for clarity, but Iâd rather start it working with Future Sight and change it if thereâs an issue.

So, finally we come to questions of direction. Should we use showdown, duel, quick-draw, or something else entirely? Beyond that, do you even want to keep exploring this setting? Iâd originally planned to go through a bunch of different world-building methods and then start working on something more concrete, but that order of activities doesnât have any big advantages over diving in along the way. So, itâs really up to you!

Thatâs all for this week,