The Selesnya Conclave - a group of nature-loving folk brought together underneath the massive Vitu-Ghazi. From within this mighty tree, the parun Mat'Selesnya speaks through the guild head Trostani - a unification of three dryads into one. Centaurs, elves, dryads, and more make up the guild's masses, but there's always room for more. 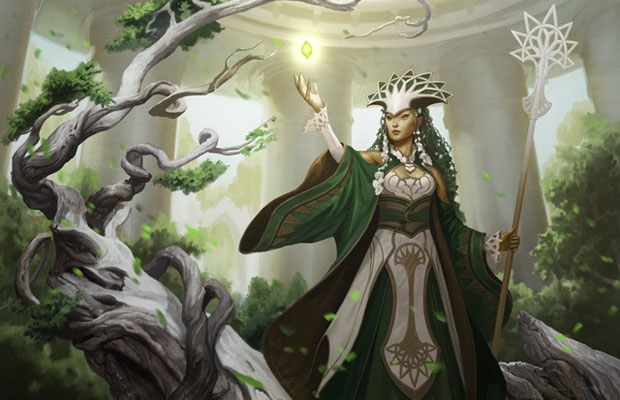 Welcome back to another week of Advanced Jumpstart. There's only two more guilds to go, and this week I get to talk a bit about my favorite guild: Selesnya! Token making nonsense has long been my way to go and Selesnya is a big part of that.

There's four more packs to go through, so let's start off by jumping once more into Ravnica: City of Guilds:

Designing these packs for a lot of the classic Ravnica block has felt really difficult because of how much rules changes have affected the ways the cards typically play. The cards also worked better as an overarching whole as opposed to a bunch one-ofs. That's not the case with Selesnya. Not only did I love this guild like crazy when it came out, the cards have just aged well.

Watchwolf and Loxodon Hierarch are as excellent of rate creatures as they ever were. They might not be as good as they were once upon a time, but you'll never be unhappy casting them as is - especially not in a Limited format like Jumpstart. The same goes for Tolsimir Wolfblood - who can pump your whole team and spit out a strong wolf as well.

And speaking of making a team, there's a number of ways to fill your board quickly with swarms of tokens. Selesnya Evangel and Selesnya Guildmage are both surefire ways to get little critters every turn, while Fists of Ironwood and Scatter the Seeds can make some fast. Twilight Drover makes it so that we can happily lose a token or two here and there, because we just end up making more! The best part is how they can fuel powerful cards like Scion of the Wild and Glare of Subdual to push our armies through.

Coming back to the plane in Return to Ravnica saw a lot of the same:

Did someone say tokens? Because RTR is packed with them. In fact, it's arguable that Selesnya was quite simply the strongest guild in the set for Limited. Vitu-Ghazi Guildmage was a certified powerhouse and Rootborn Defenses was such a good rate for a common at the time that when one popped out of a pack prior to the set's release people thought it was fake. Even making small bodies with the likes of Eyes in the Skies can be enough to overwhelm opponents.

But thankfully we also have some strong fatties in the mix as well. Loxodon Smiter feels like a bit of a redux on Loxodon Hierarch, as does Wayfaring Temple to Scion of the Wilds. For more beatsticks, we've got Advent of the Wurm and Armada Wurm to bring the beatdowns - especially when we populate the tokens with something like Trostani, Selesnya's Voice. In many ways, Return to Ravnica Selesnya just feels like it's doing what original Ravnica does but on a much grander scale. Original Ravnica goes wider a bit easier, but Return to Ravnica opts instead to go taller, and boy does it show.

Next is the recent Guilds of Ravnica set:

In general, Guilds of Ravnica had much worse token creation options and as such Selesnya in Limited was... a bit rough to say the least. Thankfully there are still several great cards to help us out. Dawn of Hope, Ledev Champion, and Emmara, Soul of the Accord each present great ways to produce lots of tokens every turn.

Even one-off options like Hunted Witness, Trostani Discordant, and March of the Multitudes can keep your armies swelling - especially if you've got a Divine Visitation on the board. These enable fantastic support cards as well in the form of Conclave Tribunal and Venerated Loxodon. Couple that with the modal aspects of Sprouting Renewal and Knight of Autumn and you've got a strong pack - even if it's not quite as good as the other two Selesnya packs.

Now let's bring them all together, as one should when it comes to the Selesnya!

I heard you like tokens! This brings together the best of the best in terms of token generation from each of the sets, as well as several fantastic support options. Go wide, go big, but don't go home, because you're sure to bring the beats with this pack!

And that's it for the Selesnya! There's one more guild left in the Simic Combine. Since Kaldheim previews are still in full force, I'll be doing that one next week before taking a couple weeks to dive into the new Norse-inspired world a bit more! I'll see you there!