Hofri was once a student like you, but then he went and got a Lorehold degree. He actually started as a Prismari student, but soon found it wasn't quite right for him. Something wasn't clicking. As such, he did what any struggling student would do and went to the school's counselor, Mavinda. After this discussion, Hofri took a different approach to things and tried out for the Lorehold school. There he truly shined, with his previous Prismari studies working well alongside his natural gift for Lorehold's spirit magic. 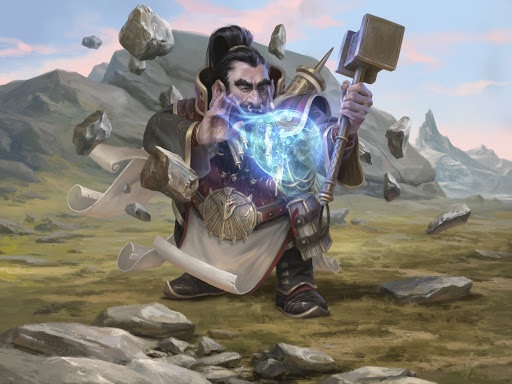 With this magic and his artistic prowess, he was able to craft spirit statues like few had seen before. It wasn't long before Hofri was offered a professional job at Strixhaven post graduation, where he now helps students and makes lots of ghostly friends in the process.

As it happens, Hofri makes for a seriously awesome commander. The overwhelming majority of Boros color - or should I say Lorehold color - legendaries we've seen over the years have been combat focused, much to the chagrin of many a Magic player. Hofri still ends up being quite creature focused, but his ability to bring creatures back when they die allows us to play a lot with abilities triggering from creatures entering and leaving the battlefield. I love these types of decks and quickly set out to make a list.

My excitement for cool ETB abilities was pretty quickly tempered, unfortunately, by realizing that a lot of the best White and Red creatures with those abilities are a bit on the dull side. Don't get me wrong - I love me a good Fiend Hunter or Solemn Simulacrum as much as the next person, but a lot of the stuff you might usually find in Red tends to just be burn effects. This is sadly quite boring and is apparent enough when you compare the number of White mana symbols to Red mana symbols in the list (46 and 25, respectively).

We do have some of the usual suspects to finish out games, like these:

Let's be real, though: they're a bit unexciting for what we'd like to be doing here. In all honesty, it feels like I'm handling a bit of a watered-down version of my old Alesha list. That deck had interesting interplay with cards like Gray Merchant of Asphodel, Fleshbag Marauder, Dictate of Erebos, Anathemancer, and so on to add a little more flavor. But that's not to say we're lacking in that department here either!

Siege-Gang Commander is never not a solid card, but it really gets even better when you can sacrifice it to itself, get a copy with more tokens in tow, then later resurrect it again to do it all over again. That's a lot of damage, and it even works nicely alongside some of the above cards like Kiki-Jiki, Restoration Angel, and Reveillark. Eternal Scourge also really likes getting exiled with Hofri's ability because it just keeps coming back! While sacrificing it to Ashnod's Altar won't quite give you enough mana to loop it infinitely, it still gives you plenty of opportunities to get rid of the endless nuisance that is Eternal Scourge.

There's also a minor Goblin Welder package that works quite nicely as well. Most people know all about looping between Wurmcoil Engines and Myr Battlespheres, but what if I told you we could get some serious value out of Combustible Gearhulk instead? As a one-off, it's not great, but being able to sacrifice it for another powerful artifact and get a clone of the Gearhulk itself, only to loop it back around a turn later is no joke. All of these cards get even more mean with the likes of Terror of the Peaks coming in to deal extra damage. But why stop there?

We can really make every single creature count with these kinds of cards. Field of Souls and Anax, Hardened in the Forge are both ways to make us extra tokens when our creatures die. Not only that, but since they immediately leave the graveyard thanks to Hofri, we also get an additional token from Quintorius. Best of all: all of these get benefits from Anointed Procession. Extra Hofri tokens? Absolutely, but how about extra Kiki-Jiki tokens? Or tokens from Wurmcoil Engine and Myr Battlesphere?

All told, Hofri puts in a lot of work and is a fantastic commander for the Red and White color combination. There're tons of fun ways to play and lots of interesting ways to overwhelm your pod with swarms of critters. If you want something sweet to try out at your next Commander night, give Hofri and all his friends a whirl!