By all accounts, the cards of Ikoria: Lair of Behemoths didn't do a very great job at depicting the story of the set. Just looking through the arts, you'd probably think that the bonder Lukka is probably a pretty stand-up guy, right? Well, turns out you'd be wrong. As it happens, Lukka was the story's primary antagonist, having been cast out from his home of Drannith after accidentally bonded with a winged cat. Because of the influence of the Ozolith on the plane, Lukka began to lose his grip on his sanity and attacked Drannith, where he killed General Kudro and was eventually defeated by Kudro's daughter, Jirina. 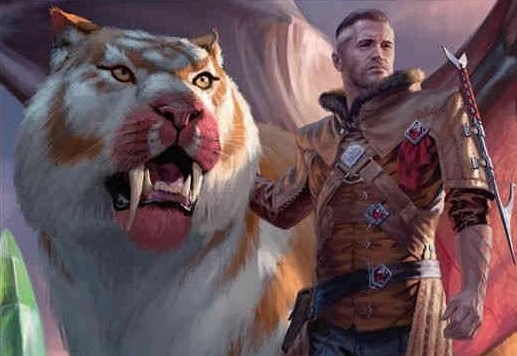 In one last ditch effort, he sought to use the power of the Ozolith to overwhelm Drannith's forces. It backfired, causing the Ozolith to explode. When this happened, Lukka's planeswalker spark ignited and he planeswalked away. From there, he soon found himself on the plane of Arcavios, where he bonded with the fox-like Mila and sought out the dark mages known as the Oriq. When he found them, he struck a bargain with their leader, Extus, whereby he would help by providing an army of mage hunters to attack Strixhaven with and give the Oriq the opportunity for infiltration they craved.

As such, Lukka is clearly in it all for himself. You might think differently from his and Mila's card, however, as they quite benefit other cards you may have on your board - especially planeswalkers! As it turns out, Mila is quite good at helping beef up other planeswalkers on your field and can provide tons of advantage, whereas Lukka can repeatedly get back tons of powerful creatures. Let's check out a list and see how these two match up!

It's admittedly a bit funny seeing a Super Friends deck in a Red-White color combination, but I think it works out great here. A few years ago, this wouldn't have been nearly as potent, and you'd still be far more likely to see planeswalker-heavy decks always be something like either Bant or five-color. Here we've got plenty of token makers, card draw outlets, and removal thanks to a swath of powerhouse walkers. If all else fails, we can even turn them into creatures for a lethal strike courtesy of Sarkhan the Masterless.

What's more, White really got a lot of great support for planeswalkers over the last few years, particularly during the whole Gatewatch arc of the story. Thanks to those sets, we ended up getting cards like Call the Gatewatch, Deploy the Gatewatch, Ignite the Beacons, Thalia's Lancers, and Djeru, With Eyes Open. All of these let you find exactly what kind of planeswalker you might need at any given moment. If they all end up hitting the graveyard, no problem. Cast a Triumphant Reckoning toward your game's close and bring them all back in one fell swoop for the finishing assault.

While many of the deck's creatures play more of a support role, thereby letting the planeswalkers do all the heavy lifting, there's still plenty of power to be had. Wurmcoil Engine and Myr Battlesphere are no joke as ever, and can easily be brought back with a Karmic Guide in a pinch. Sun Titan lets us get back lots of powerful permanents, and we can even discard them to several of our deck's rummaging abilities to get them onto the battlefield at an affordable rate. The real might, however, is in Terror of the Peaks. Several of the deck's planeswalkers make tons of tokens, and they can put in some incredible damage with this mighty dragon. If you manage to ultimate Lukka as well, you can even double up on this effect as well.

That about wraps up this rundown of yet another sweet Commander deck, though. I've gotta say, I'm kind of loving the ability to either have your choice of either a creature or a planeswalker. Valki and Tibalt were cool enough in Kaldheim but Mila and Lukka have a ton of neat interplay I hadn't expected until I started tinkering around with a list. I hope Wizards does more of this in the future because it can do such cool things in the realm of Commander. For now, though, I hope you have fun with this neat, fresh take on a Super Friends strategy at your next Commander game. Be safe and have fun!