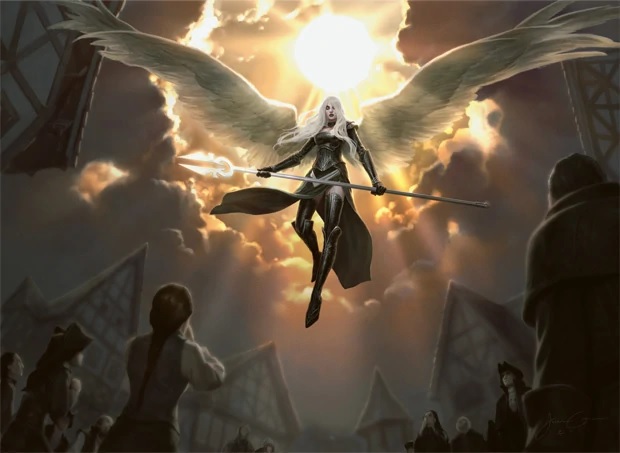 Avacyn was the light of the plane of Innistrad. She gave hope to the endangered masses of humanity that inhabit the world. Vampires, Werewolves, Demons, and more all quaked beneath her luminous ferocity. And then the Travails came and brought Avacyn and the angels of the world to madness, where they turned on those they were charged to protect. Their insanity brought death, fear, and a grave pain and agony before Sorin, of the Markov family, took her life in an attempt to stop the bloodshed.

With the guardian of Innistrad gone, Nahiri - the revenge-crazed Kor planeswalker of Zendikar - was able to summon forth an even greater monstrosity: the Eldrazi titan Emrakul. And so Innistrad was brought to its brink, with all manner of beings ending warped and twisted by Emrakul's influence. And so fell the archangels Bruna and Gisela, who were melded into a single grotesque being known as Brisela.

There was still yet one angel, who had not fallen, however. Sigarda, immune to the influence of Nahiri and Emrakul, led the throngs of humanity in a battle against the otherworldly forces. With the aid of Thalia, she led the humans against the Eldrazi menace. When confronted by the twisted and maligned Brisela, the merged sisters tried to bring Sigarda into their disturbing form, before Thalia saved her and slew Brisela using Avacyn's own spear. 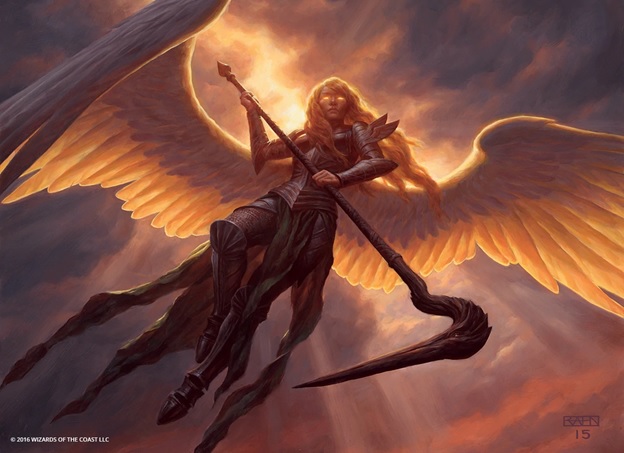 In the wake of the Travails and the loss of Avacyn and her sisters, Sigarda became the new light of Innistrad. The humans of the plane began to follow her and her lead and she in turn took her role as the protector of humanity. It's only fitting, therefore, that we got a new Sigarda card in Innistrad: Midnight Hunt: Sigarda, Champion of Light. It's also fitting that we make a deck fit for her latest iteration and the masses of humanity she strives to protect.

This list is about as good stuff as it gets, playing with the best the human tribe has to offer. I thought about a couple different ways I wanted to approach this list as I created it. The first thing I did when starting to work on the list was added as many cards relating to Sigarda as I could find. One card I noticed was Sigarda's Aid. My mind quickly went to using equipment as a way to get the varying powers needed to get coven online.

Before I could explore the equipment, though, I decided to dive into the various humans the game has to offer and create a pool of cards to work with. Even as someone who has mained Modern Humans in the past, I didn't realize there was such a plethora of powerful humans - especially in only two colors! The more creatures I added, the more it clearly was going to become difficult to sneak in any equipment. Even cutting down on the creatures proved incredibly challenging, and it felt like I was barely able to squeak in a handful of spells to provide a few essential abilities.

As it turns out, Innistrad has no shortage of great humans in Green and White, which means the majority of this list actually leans heavily on the flavor of the world itself. Not only do we have many powerful creatures, but we even have effects like Cathars' Crusade to always ensure that we'll have a variety of powers to enable coven. There's lots of +1/+1 counters going around as well, meaning the Tarkir outlast creatures make for fantastic inclusions. Most of them are humans and provide powerful abilities to the creatures.

All in all, this makes for a truly potent and synergistic way to beat down your opponents' life total. For the glory of Sigarda, try out this list today! Enjoy the harvest and may the lengthening of nights come to a swift end. Give this list a try at your next Commander pod and may the blessings of Sigarda be upon you this day!