A couple weeks ago, I had the privilege of talking a bit about my love of horror thanks to Innistrad: Midnight Hunt. Specifically, I talked about folk horror, which I deeply enjoyed because it's a genre of film that doesn't get a lot of love yet clearly had a good amount of influence on Midnight Hunt as a set. That's just a small section of horror, though, and there's a lot more that that horror has to offer. October may be over, but that's not going to stop me talk about one of my favorite genres during Magic's own spooky season!

While Midnight Hunt took a lot of its inspiration from folk horror in particular, the plane of Innistrad as a whole largely focuses on a handful of genres of horror, while touching on others. The biggest focus is on gothic horror, which is the sort of thing you'd expect from the Universal monster movies. Dracula, Frankenstein, The Wolfman, The Invisible Man, and so on are all fairly well represented here. It's even more on display in Innistrad: Crimson Vow to the point that they're using a lot of Dracula material (thank you public domain!) and attributing it directly to the set. They even used clips of the original Nosferatu silent film for the lead-up to the initial preview showcase which I can't applaud them enough for! 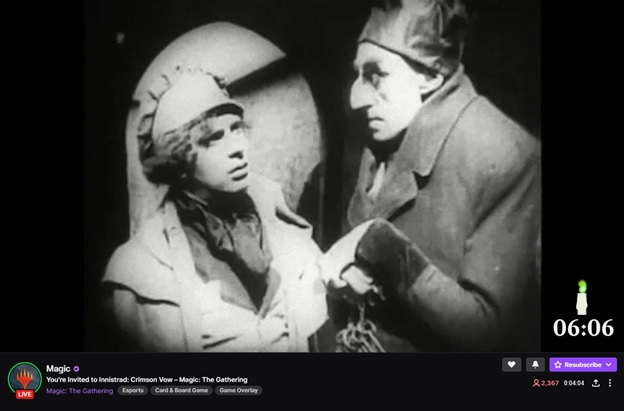 They also dove pretty deeply into cosmic horror with the Shadows Over Innistrad block, showcasing a more Lovecraftian style of horror. This type of horror is rarely brought to the silver screen very well, as it's more a genre about abstract concepts and hard to imagine horrors of body alterations and insanity-inducing beings. Think deities so monstrous they drive you to madness at the mere sight of them. A lot of this was represented well, but something about it didn't quite mesh.

Sam of Rhystic Studies recently released a video talking about this, while also talking about the other types of horror present on Innistrad as well. Things like demonic possession, for example, or ghostly hauntings. He talks about imagery, the history of horror, and various explanations of how horror makes us feel the way we do and why it's so appealing.

At the video's beginning he talks about the streaming service Shudder and his recommendation of the Italian horror film Deep Red - a classic of the Gialo genre. Gialos are basically the slasher films of Italian cinema, though they have their own special flair to them as well, and Dario Argento is a master of the genre. Talking with Sam a little about it on Twitter, and watching a lot of mentions of - say - Texas Chainsaw Massacre in his video, I was stricken by a thought: is there a solid representation of a slasher villain on Innistrad?

There're a few clear examples of this type of monster, but there's no real legendary representation of this iconic sort of character. Abattoir Ghoul and The Meathook Massacre are, as Sam mentions in his video, rather overt references to Texas Chainsaw Massacre and its titular villain Leatherface. There's also a handful of creatures that feel like they represent this archetypal villain - such as Grim Flayer or even Startled Awake's backside of Persistent Nightmare. However, we really haven't had a good legendary creature that we can use to head a Commander deck!

Think about it: sure, Innistrad is plagued with villainous monstrosities who kill for sport left and right, but they're presented as generic and common. A dime a dozen. When you look at slasher films in general, though, who do you remember? You always remember the big bads and the villains. Freddy, Jason, Michael Myers, Chucky, Ghostface, and so on. Sometimes there's slashers where villains are lesser-known but the focus is still on those villains. I recall films like Hellraiser - whose main villains actually aren't the monstrous cenobites people came to know best - as well as, say, Sleepaway Camp, The Stepfather, or Maniac which all focus heavily on the killer.

On Innistrad, there's no good legendary creature that represents this trope of horror! I actually went and scoured the legends and characters to think on this some more. The demonic villains and eldritch horrors of the eldrazi both are their own type of monsters that couldn't really be described as anything close to a slasher villain. Gisa and Geralf are probably some of the closest with how their personalities feel, but they're more about the zombies they make rather than being slasher villains themselves. In fact, the ones I thought closest would be the likes of Grimgrim, Corpse-Born - who is a mindless killing machine - or possibly Wilhelt, who kills people in undeath to express his love for Gisa.

Neither one ends up really hitting the mark, though, and ultimately the only real slasher type of character I can think of is Garruk! The thing is, though, he wasn't really a full-fledged killing monster yet in original Innistrad - where he was still in the early phases of his curse - and was there to seek out Liliana to find a cure for his ailment. What's more, his card wasn't really something that could be used for an actual Commander barring rule zero shenanigans. I'd really love to see this trope brought to Innistrad in the future - to see a slasher villain who goes around killing people and doesn't die with ease.

While there isn't really a slasher villain character on Innistrad, there is one on another of Magic's most popular planes: Ravnica! That's right, I'm talking about Massacre Girl.

Massacre Girl is exactly the kind of character I'm talking about. She just goes around killing people for fun while evading the law - and death! Most people didn't know about her when she showed up in War of the Spark but she was originally mentioned a decent amount in the Return to Ravnica block! There she showed up in some artworks and flavor texts. In fact, there was a top 10 most wanted that Wizards put out once upon a time and it had Massacre Girl as the number one most wanted. Originally, she was supposed to head the Rakdos in Dragon's Maze but ended up being shifted to Exava instead, and so we had to wait until the culmination of the Bolas arc for her to show up.

Since we don't have an Innistrad slasher commander, I thought it fitting to at least make a deck around her in the spirit of the season. Let's check it out:

The goal here? Wipe out your opponents' fields and make them suffer! Then, when they're at their weakest, you can strike with pinpoint precision to go in and pick off your opponents one at a time. It's a little miserable for the rest of the table at times, but that's the nature of the beast with this particular slasher movie killer! There's really tasty thematic equipment for her too. Giving Massacre Girl a Vorpal Sword and going in for a lethal swing is just a chef's kiss of flavor. After all, what good would a slasher villain be without a handful of murder tools to kill unsuspecting victims with?

The deck is pretty simple and straightforward in its approach overall. You play a few creatures, make your opponents get creatures, and rip them to shreds. If you build your board up well enough, you can even get a lot of triggers from the likes of Dreadhound and Syr Konrad, the Grim to chip at their life totals. You can also use cards like Dictate of Erebos and Butcher of Malakir to take out any remaining creatures your opponents may have to clear the way for Massacre Girl. After you wipe, you can even get creatures back to your side with Grave Betrayal and Thrilling Encore, or else make your own monstrosities with the likes of Spoils of Blood and Rise of the Dread Marn.

All told it makes for a really sweet maniac movie of a Commander game, 80's style, and I wouldn't have it any other way. I hope you give this deck a whirl, until we get our very own Innistrad slasher legend on day in the future. Make your opponents suffer and take them out with Massacre Girl!

P.S. - If you want some good slasher movies you might not have heard of already, here's a couple additional ones I didn't mention already that are worth your time to check out: