Today I'm going to share my thoughts on the Modern metagame as it continues to evolve. At this point there aren't many new archetypes rising to the top, but the top deck can only take the throne for so long. Or so we hope.

The Best Decks or Decks to Beat?

The two decks currently at the top are Grixis Death's Shadow and Hammertime. Despite their current dominance I don't think all hope is lost. Both of these decks can be exploited; I have confidence the metagame wheel will continue to turn.

In this Twitter age we can be quick to abandon hope as soon as some decks rise to the top, but the reality is much more nuanced. Once someone 5-0s a league all of a sudden it's "cracked" and there's no way it can be beat. Don't buy into the hype. There is a huge difference between the "best deck" and what is currently king of the hill.

Soulstrong's list continues to be stock. If you're going to change more than a couple cards and winning is your top priority it's hard to justify in the current metagame. It's reasonable to make some slight changes so your opponent doesn't know your exact seventy-five when you play your first land.

Shadow is a brutally efficient deck, but so is the rest of the Modern format at this point. Modern Horizons 2 lifted all ships as the curve of just about every viable archetype is very low and interaction is plentiful.

Despite Shadow being one of the decks to beat it has very close matchups and the smallest mistake will cost the game. Grixis decks don't have the broad sideboard options that White does so there are always opportunities to exploit. The current trend is to skimp on graveyard interaction in favor of additional ways to interact with Sanctifier en-Vec. Let's use this to our advantage.

Since the current stock list of Grixis Death's Shadow is filled with answers to Sanctifier en-Vecs you will need more copies in order to get one to stick. It also means you can sidestep this dance by playing more copies of Veil of Summer when possible. We have seen this in Selesnya Hammertime.

Dredge and Living End are two graveyard decks that have a good chance against Grixis Shadow. Unfortunately for Dredge it's even weaker to Sanctifier en-Vec. Living End has been the weapon of choice for the current MODO Modern trophy leader, MeninoNey. This is a good time to be cascading as Four-Color Omnath is preferred to Azorius Control and Temur Rhinos are a small portion of the metagame. 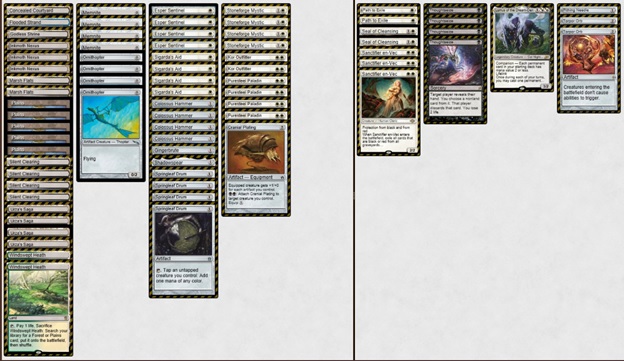 This list, designed by Will Krueger, won a Modern Challenge on Magic online recently. The maindeck is fairly locked in at this point, but I think there are opportunities to change a few cards. The sideboard Torpor Orbs are a metagame call for Omnath Piles and are subject to change.

I have taken a brief trip into Hammerland and found the deck to be extremely intricate. Despite the deck being filled with decisions I was able to take down some matches. The best draws aren't super complicated to pilot. Things get tricky when your borderline hand doesn't produce a quick combo.

An area to explore with Hammertime is adding a few Thoughtseize to the maindeck over the fourth Memnite and Springleaf Drum as well as the Gingerbrute. Maindeck disruption felt strong to me against just about every matchup. It was a nice bonus that I didn't have to play around Solitude and Fury quite as often.

When I added some Thoughtseizes to the maindeck I was able to add a couple Burrenton Forge-Tenders to the board. Forge-Tender is able to prevent the massive life swing against Burn provided by Deflecting Palm and blocks Ragavan and Dragon's Rage Channeler against the lean interactive decks. They were also extra insurance against Fury.

I also like Thoughtseize against one of Hammertime's more tricky matchups, Living End. Not only is Living End a good call against Grixis Death's Shadow, but also Hammertime. There aren't enough slots in the sideboard to fight graveyards beyond the Sanctifier en-Vecs filling a niche for Blue creatures to come back from the dead.

An interesting consideration from Grixis Shadow's list solidifying is that I didn't board in Pithing Needle to stop Engineered Explosives. Since I know the stock list plays one EE in the sideboard and has three Kolaghan's Command in their seventy-five it would be a better play to name Bloodstained Mire in the early game if it was in my deck.

Hammertime is able to be justified as a deck to beat because it's so good at fighting other linear strategies. It's not only resilient, but is also quite fast. Hammertime has the side effect of making the metagame more interactive.

There's a lot of hyperbole online about how Grixis Death's Shadow beats decks like Tron and Burn. These matchups are pretty strong for Hammertime, but are close for Grixis Shadow and are typically dependent on the die roll.

Both Hammertime and Grixis Shadow function much better on the play because of Ragavan and Esper Sentinel. There is a risk to playing a deck that functions so differently on the draw.

I prefer Lurrus in Hammertime, but I'm not sure it needs to be a companion in Game 1. Kaldra Compleat was surprisingly strong in the Hammeritme mirror and Sword of Fire and Ice is a solid equipment if you don't have an equipper handy. The best application for Lurrus as a companion was to combo with Seal of Cleansing in the mirror and against Amulet Titan.

What Decks To Play

Given that Grixis Shadow and Hammertime are at the top of the food chain there are plenty of decks to consider.

The most important thing to keep in mind is that Modern is currently heavily skewed toward interaction while the threats are less powerful. Every linear deck has a sideboard foil to play around. When our solid draws are stopped dead in their tracks it can feel like the grass is greener on the other side. Each deck rewards dedication and careful play; audibling to a deck you don't understand as well will not change that.

When you feel like certain archetypes "always have it" what's really happening is that you have a certain range in the Modern format. Each range in Modern can be preyed upon by another macro archetype so they need less to go their way to win. I like playing fair, interactive decks that typically lose to Tron and Dredge. Even when their draw is bad I give them time to win.

With that out of the way, here are a couple decks I like:

I've come back to MoneyPile because I like the matchup against both Hammertime and Grixis Shadow. The tradeoff to being competitive against the two decks to beat is that you're weaker against linear decks like Tron and Dredge.

In a large tournament I was initially skeptical of how difficult the deck would be to pilot, but there are typically only a couple spells that are castable each turn. There are plenty of threats that enter the battlefield and remove the opponent's best threat making the game effectively over quickly. As long as you fetch while your opponent is taking their turn, time won't be too much of an issue. This deck plays out like a Tron deck where you have extremely polarized matchups, but don't mulligan as frequently and the die roll is less of an issue.

The hive mind is moving toward Eladamri's Call and away from Ice-Fang Coatl, but I've been very impressed with the 1/1 flyer. I like Eladamri's Call against Burn to find Omnath and the mirror to find Emrakul, the Promised End in the sideboard, but the floor is pretty weak.

Rather than playing the Eladamri's Call and Emrakul to close the mirror matches I have Time Warp to go over the top and steal the initiative.

The flex slots are becoming more nimble pieces of interaction such as Lightning Bolt and Counterspell. It's not unsurprising as both of these are just very good Magic cards.

Each time I try Ephemerate I feel that three copies is one too many. It's not really a combo with Fury because the first trigger will likely clean up the battlefield. There is so much removal in the deck that resetting Solitude is also not a top priority.

I tried a Sanctifier en-Vec, but Veil of Summer is the way to fight Grixis Shadow. Other counterspell-based decks also have a very hard time with Veil as a single threat generating traction can close the game.

Subtlety continues to impress as a way to fight big mana decks or just opposing planeswalker control strategies. I even brought it in against Phyrexian Crusader out of Sultai Infect.

Aether Gust is also not as popular in the stock list of Four-Color Omnath, but it has been my star performer. It interacts with Blood Moon, Primeval Titan, burn spells, Crashing Footfalls, and much more.

If you like to play interactive decks, think of this as the Jund of the format. I think it's very fun to play.

If Living End is the type of deck that is far out of your wheelhouse I wouldn't recommend picking it up. If you do like decks with weird interactions this is a good place to turn. Modern has been using a mostly static card pool for over six months at this point so it's a good idea to get a feel for the major archetypes and niche players.

I don't see Living End as a great metagame call for a long time, but there will be time to pick your spots. For example, if you like playing artifact aggro decks and don't want to be unfavored against Living End then Hardened Scales is a reasonable pivot. Arcbound Ravager has always given this deck a headache.

The dance of Leyline of Sanctity and Soul-Guide Lantern continues. Now that the Grixis Shadow stock list plays Nihil Spellbomb it's once again important to give yourself hexproof.

That's all I have for today. Modern is the most popular tournament format for a reason. It continues to be great. Always evolving.