A friend recently got me into the comic book Die, which I highly recommend if you like comics, role-playing games, or spent any time ever playing D&D. The characters are captivating, but one of them is described (sort of) like this: "This character is a Bard, if everyone were terrified of Bards."

So when Wizards did the world's most obvious thing and teamed up with My Little Pony(TM) (something Magic players and MLP fans the world around have been clamoring for since time immeasurable), I figured the next most obvious thing to do was to take one of those ponies (Unicorns, actually) and terrify everyone. 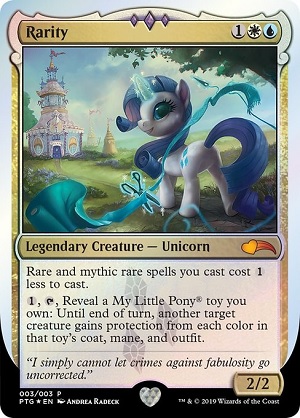 Frankly, all three of the 'Corns are broken. 8/8 Flying Menace for six? Yeah. And our Unicorn gives a

mana reduction to every Rare and Mythic Rare spell, plus for a single mana we can give any creature we've got protection from any color in the coat, mane, and outfit of the My Little Pony we reveal. Yup, we're going to have to carry around a pony doll or two, but that's not a big deal. We all have backpacks or bags to carry various decks, plus dice and tokens. Find the five colors (heck, I'd try to find some grey and call it "colorless") and we've got Unblockable. (Yeah, yeah, "colorless" isn't a color. But we're leading with a Silver-boardered commander, here, so we're already breaking the rules.)

Rarity is super cute. There's a sweet quote about friendship from a Unicorn whose entire world is about... friendship. So we need to figure out a way to scare everyone right out of the gate, and what does that better than aggro? While we're at it, let's leverage that first ability too: nothing but Rare and Mythic Rare cards in this deck, save some basic lands. It's nice when Forbid becomes Counterspell and Snapcaster Mage costs

Our mana base is a suite of duals, many of which come into play untapped, plus Flooded Strand to fetch, and a Cathedral of War, which matters a fair amount because most of the time Rarity can only help one other creature. We've got 39 lands, which is one fewer than the normal here, but our curve is quite low. We have a whopping two 6-drops, not many more 5-drops, and we've got mostly threes. Since everything costs one less, that means we're paying two for the vast majority of our cards. A couple of our artifacts are free! We can also skip any acceleration. We don't need it. We're going to land a couple of threats and start beefing them, not trying to get to large, or particularly fast, mana.

One of the biggest problems with aggro decks in EDH (and in general, really), is they run out of steam because they lay down their hand and are forced into top-decking. However, we can make sure that a number of the things we want to be doing are additional abilities on cards we want for other reasons. We've got a couple of creatures that draw cards when they do combat damage to an opponent, plus a number of ways to add a draw when anything does damage. So we give it pro-every color and swing in, drawing an extra card while doing the damage we want to be doing anyway. Augury Adept is one of the best at this; yeah, we have to reveal what we draw, but we gain life too. Coastal Piracy and Bident of Thassa are kind of the same here. Jace, Ingenious Mind-Mage is also kicking around; it has a high CMC, but draws us a card every turn for the trouble.

We've also got a bunch of cheap creatures with Enters-the-Battlefield or Combat Damage abilities. Dragonlord Ojutai lets us pick from the top three of our library. Blinding Angel prevents another player from having a combat step at all. Brago, King Eternal lets us flicker our permanents, which isn't a huge thing but can be useful with something like Stoneforge Mystic or Snapcaster Mage. Extra points for using flicker with Glen Elendra Archmage, because we can reset the Persist counter and keep using her. Cephalid Constable does a nice job of slowing an opponent down, especially if we can bump its power up some. Daxos of Meletis lets us use their stuff, Herald of Anafenza helps us put an army of blockers out, Mist-Syndicate Naga makes copies of itself, and Raven Guild Master decimates our opponent's library.

But the key to all of this is to suit up with some ridiculous equipment. We're running all seven of the Swords of X and Y here, mostly because they give us protection, working as our Commander would in case someone has the nerve to do something to a cute, colorful Unicorn that likes to talk about friendship. They also have absurd abilities, so even on a 1/1 a Sword of Feast and Famine is pretty terrifying. Topping it off, we're running a Quietus Spike, which is scary when attached to something that can always hit, and a Bloodforged Battle-Axe, which seems silly until there are 12 of them all attached to a Riptide Entrancer. Argentum Armor is also here, because that card wins games.

We've also got some removal spells, but we're actually fairly limited here because a lot of the go-tos like Path to Exile are not rare. Detention Sphere is our Oblivion Ring, plus Deputy of Detention. Giant Killer is a cool new addition. Hanged Executioner is cheap, evasive, and can exile something. Declaration in Stone is slow but can ruin a token player's day. Supreme Verdict and Time Wipe are our board wipes, though honestly we'd rather it not come to that.

But really we've got Counterspell. Actually, not Counterspell (it's a common), but we've got a bunch of cards which behave like it. Absorb and Render Silent both don't cost less, but otherwise, we get three-mana counters for two and four-mana counters for three, which is pretty great. A couple of well-placed counters can go a long way in a game of EDH, because from then on if you've got

up you're in psychological control. That doesn't mean throw them around early just 'cause, but don't be afraid to counter an early Wrath or some big threat just to show you can.

A couple of Ajanis and Gideons join our Jace, plus Dovin, Grand Arbiter makes an appearance. Ajani, Adversary of Tyrants both gives power boosts to our little dudes and can return them from the dead. Cat tokens are cool, too. Meanwhile, Ajani, Caller of the Pride also gives a bonus to a dude, but the -3 ability is the key here, because Double Strike is great in this deck. A 1/1 with a few swords on it is a scary sight; give that creature Double Strike and it can be lethal. Gideon Blackblade can grant Lifelink or Vigilance to our chosen attacker, which can matter a great deal if the board is getting full. Dovin, meanwhile, mostly just grows. He comes down really early, then if we hit with a couple of creatures is quickly up to his ultimate, at which point we get three of the best cards from our top 10. It's helpful, but mostly it's distracting.

Gideon, Martial Paragon gets separate mention because he actually goes with a different category of cards: the untappers. It'd be nice to be able to use Rarity's second ability more than once, or untap her so we can keep it up for while it's not our turn to protect ourselves. Gideon lets us do this by untapping all our guys. We can even get the bonus on the attack by activating Rarity, then using his +1, then attacking, leaving Rarity untapped. But to add to the fun we have Thousand-Year Elixir and Staff of Domination. (Umbral Mantle is, sadly, not a rare.) If you are wondering, I looked at Teferi, Hero of Domanria in place of Jace, but Jace can untap our commander.

Finally, we have a couple of ways to keep all our creatures alive when a Wrath of God does hit: Selfless Spirit and Unbreakable Formation. It may be a long shot, but if we can retain our board state when everyone else gets hosed, it's going to be one of our best shots at closing out a game.

This deck isn't going to break any tables. It's not particularly unfair, just quick. It's more about the surprise factor of playing this cute character and leading on Hanged Executioner, into Stoneforge Mystic, into Rarity, into Sword of Sinew and Steel, into Bloodforged Battle-Axe... you get the point. We play absurd cards, attack quickly and for surprising amounts of damage, counter key spells to keep our opponents on their back feet, and do absolutely nothing to make friends.

Things to consider: break the Rare policy, at least on lands. This deck does not need Tundra, it's just easy to put it in when you're building a deck on paper. Plus, it could probably benefit from Sejiri Steppe or Tectonic Edge. If you branch out further you get a bunch more removal plus you can start playing around with pump spells, which might be a bit of a different deck but could still leverage Rarity's cost-reduction ability.

Most of the time I really will tell you what the other or second choice was, but as soon as I saw the ponies I knew I was going to build one, and this one was next (I'm still a little annoyed I missed Nightmare Moon). How would you build Rarity? What would you add? Most importantly: how are you going to convince your friends to let you play with a silver-bordered Commander, and which My Little Ponies will you carry to cover your color needs?

Next week, I think we should see if we can build a mill deck that can actually win.