It has come to the attention of the Student Advisory Committee that your course entitled "Reanimation of the Recently Deceased" has caused no small degree of trauma among first-year attendees. While we appreciate your diligence exploring the boundaries between life and death, such exploits are better suited for the more senior-level of our student body. Multiple reports of unprovoked bites aside, the nature of the curriculum strikes many as, if I may be frank, disturbing. I mean no disrespect, dear Professor, but as Strixhaven's Chief Councilor, I can only ignore the terrified screaming for so long. As such, please excuse all first-years enrolled in your course from attending class for the next 48 hours. It is my professional opinion that a brief stint in exile will provide these students the emotional reprieve necessary to resume their studies fully refreshed. I assure you ,their absence will be brief and they will return reinvigorated, ready to provide value to the classroom once more. The Strixhaven Student Advisory Council thanks you for your understanding. 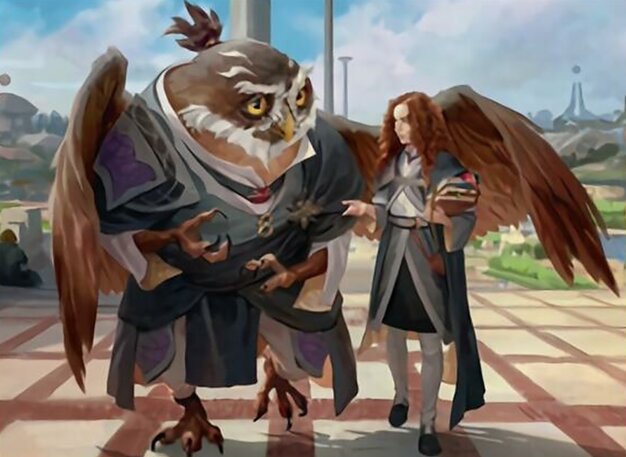 Winning Magic often comes down to who can generate the most value over the course of a game. Drawing cards is perhaps the most straightforward application of this principle. Odds are, if you can draw more cards than your opponents, you'll have more options with which to destroy them. And protect yourself from their threats. 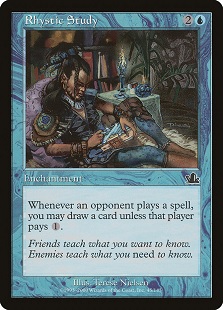 But there are other ways to generate value, and among colors/strategies where card draw is difficult to come by, such alternatives warrant extensive exploration. When it comes to Commander, few strategies embody "Hard Mode" moreso than Mono-White. Much of what the color lacks - card draw and ramp - are outright pillars of the format. What's more, White's strength in Aggro and Stax-type strategies are either largely ineffectual or simply frowned upon in the format. Against three opponents, each at 40 life, starting things off with Savannah Lions-esque stats is far from ideal. And good luck getting your playgroup to join you for another game if you bring Armageddon to the table.

Though Wizards is starting to catch White up.

While newer cards such as Keeper of the Accord, Archaeomancer's Map, Scholarship Sponsor, Mangara, the Diplomat, and Secret Rendezvous illustrate Wizards of the Coast's attempts to correct these issues, options are still few. As such, we'll need to get creative when it comes to generating value.

At first glance, Mavinda, Students' Advocate brings to mind the recycling of combat-tricks a la' Feather, the Redeemed. White certainly has a large variety to choose from, many of which cantrip (Guided Strike, Defiant Strike, Carom), allowing Mavinda to draw a few extra cards along the way. This approach is straightforward, but today's deck will explore a more unique take. Cantrips are nice, but much of their value comes from the card-draw rider attached, with the main effect often being small. How can we harness Mavinda to generate value and get powerful, repeated effects?

Well, White also has access to another theme, one that synergizes perfectly with our avian general:

Your 'doctor's note' from Mavinda

Blinking has always been a fun strategy, allowing for a lot of versatility and crazy effects. Fortunately for us, White also has access to a large variety of creatures with potent Enter-the-Battlefield (ETB) abilities (Reveillark, Palace Jailer, Luminate Primordial, Angel of Finality, Recruiter of the Guard, etc.) all of which will trigger repeatedly when the creature is exiled and returns to play. We'll be combining these creatures with our Blink-effects, then generating extra value with Mavinda, Students' Advocate to provide us with ramp, card draw, removal, and many more sources of utility.

Let's see if we can redeem Mono-White and craft a deck, led by Mavinda, Students' Advocate, that can stand up to strategies with more inherent card advantage and ramp. 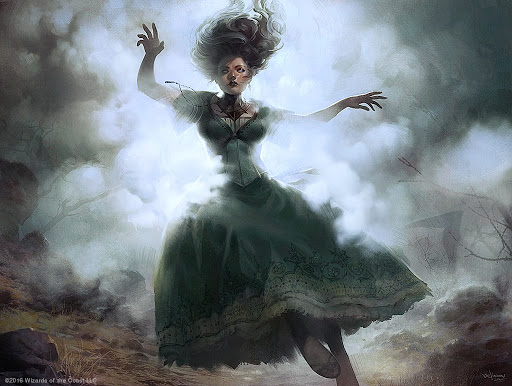 Our primary objective is control over the board via the repeated triggering of multitude ETB effects, backed up by Mavinda allowing us to cast our Blink-spells twice. We seek the win via avenues centered on this theme. We'll work to keep the board clear via repeated removal, both spot and mass, while often being able to protect our entire team from the fallout.

Blinking Spirits. And Soliders. And Knights: Our army is broken up into two main units. First, we run a versatile mix of ETB-themed creatures. Deadeye Harpooner, Skyclave Apparition, Fiend Hunter, Palace Jailer, Mangara of Corondor, Sunblast Angel, and Cataclysmic Gearhulk all work to remove threats, either in pin-point fashion or on a wider scale. Solemn Simulacrum, Stoic Farmer, Kor Cartographer, and Knight of the White Orchid provide White with genuine ramp, and we even shore up card draw via Thraben Inspector, Wall of Omens, and Mentor of the Meek. Finally, in the later game, a timely Lumbering Battlement, Reverent Hoplite, or Evangel of Heliod can provide enough of a threat (especially when combined with Cathars' Crusade) to help close things out.

The next camp of creatures support Mavinda, Students' Advocate by enabling additional blink and/or return-to-hand effects. White has a ton of options to choose from, each allowing us to re-buy whatever effect best fits the situation: Restoration Angel, Charming Prince, Eldrazi Displacer, Whitemane Lion, Glorious Protector, and Dust Elemental. The latter two options are also good protection against board wipes, either opposing or our own.

I'll admit, the inclusion of Dust Elemental is largely experimental, as it's a quirky card that requires setup. The 'drawback' is steep, but if there were ever a deck that could turn it into a benefit, it'd be this one. Think of it as an Instant that reads "Return two creatures you control to your hand" (the Elemental itself is creature #3) with Buyback 0. If you'd rather a more direct option, feel free to swap it out for the likes of Flickerwisp or Felidar Guardian.

Entrance to Exile: True to theme, our spell suite makes the most out of Mavinda's ability, providing additional sources of blink while targeting creatures to ensure the spells can be recast 'tax-free'. Liberate, Long Road Home, Justicar's Portal, Cloudshift, Emphemerate, Otherworldly Journey, and Acrobatic Maneuver also work to protect our creatures from targeted removal or allow them to block freely in combat, then blink out to emerge unscathed. Settle Beyond Reality tacks our own removal directly onto a blink effect. We also employ a more large-scale form of this effect in Semester's End and Eerie Interlude, which take this protective angle to such an extreme that we can get creative and drop one of our own board wipes once our creatures take a vacation, allowing them to return to a fully cleared battlefield.

We also run an array of supporting permanents to either keep the blink-cycle spinning or generate additional value out of our ETB-effects: Conjurer's Closet, Panharmonicon, and Strionic Resonator.

Supporting Spells: Outside of straight-forward blink effects, our arsenal of backup spells is meant to provide additional protection and board control. Fell the Mighty's nature of targeting one of our own creatures makes it a wrath-with-flashback when combined with Mavinda. One that will often team most of our team unscathed, as many of our creatures are on the smaller side. White offers additional excellent sweepers in the form of Austere Command, Hour of Revelation, and Ondu Inversion.

The aforementioned Cathars' Crusade is one of our win cons, growing our army to a massive degree when combined with multiple blink effects and/or token generation. Act of Authority also works as a form of removal that can, itself, be blinked for value. Enlightened Tutor is insanely cheap (mana-wise, at least) for its effect, acting to search up either of the aforementioned tools or even a mana rock if needs be.

Mana Support and Rocks: With our ideal setup taking time and resources, we'll want to generate the most explosive starts we can, mana-wise. Once we're able to drop one of our 'ramp-creatures' (Knight of the White Orchid, Kor Cartographer, etc), we should be able to consistently find and play lands. But in the meantime, we'll want to get ahead as far as possible with some of the best mana rocks in the game. Mana Crypt, Pearl Medallion, and Extraplanar Lens are pricey, but powerful. Regarding Extraplanar Lens, you'll note that we run Snow-Covered Plains over regular ones. The reason being that an Extraplanar Lens with an Imprinted Snow-Covered Plains will make it so opponents running basic Plains will not benefit from the mana-doubling effect. Other rocks include classics like Sol Ring, Everflowing Chalice, and the extremely blink-friendly Archaeomancer's Map.

Lands-wise, we run plenty of Snow-Covered Plains for our ramp-creatures to find, but also bring in a lot of colorless sources of mana to help power Eldrazi Displacer. Mono-color allows us to bring in a lot more colorless utility lands to generate even more value on top of what we're already doing for a very low opportunity cost: Blast Zone, Wasteland, Arch of Orazca, War Room, Kor Haven, Scavenger Grounds, Arcane Lighthouse, and Endless Sands.

While the tutoring ability of Recruiter of the Guard is key toward finding powerful tools like Mentor of the Meek, Mono-White offers a ton of other options for great ETB-effects (Luminate Primordial, Karmic Guide, Cavalier of Dawn) for value. Alongside Palace Jailer, other creatures with the Monarch ability (Archon of Coronation, Protector of the Crown, Palace Sentinels) all love getting blinked.

Idyllic Tutor's recent reprinting brought its price down considerably, making it a much cheaper option than the insanely-pricy Enlightened Tutor. Protection-wise, Cosmic Intervention and Sudden Disappearance may not be open to recast off of Mavinda, Students' Advocate, but both can save your team in a bind, and in the case of Sudden Disappearance, remove opposing blockers for a potential win. If you're looking for something more in-line with Mavinda, Sejiri Shelter provides a flexible option than can be used for mana when needed.

Our mana base easily constitutes the priciest portion of our deck. Powerhouses like Mana Crypt and Ancient Tomb are notorious for both their high prices and impact on the early game. For cheaper lands, we'll want to take advantage of our colorless options such as Ruins of Oran-Rief, Mage-Ring Network, Myriad Landscape, and/or Faceless Haven to start dealing damage after a wrath.

Budget options for mana rocks / Smothering Tithe come in two forms. We could either swap out the expensive mana rocks for replacements in the vein of Seer's Lantern, Marble Diamond, and the like, or keep the theme of ETB-creatures going by bringing in Boreas Charger and Scholarship Sponsor to fetch Snow-Covered Plains. 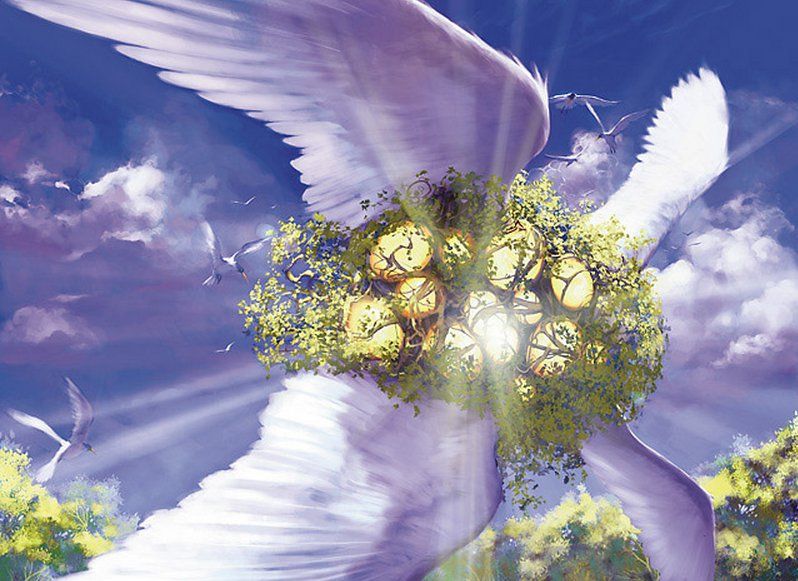 I hope today's build gives you a new appreciation for alternate forms of card-advantage. When pure card draw and ramp are hard to come by, flexing one's creative deck-building muscles becomes all the more important. Perhaps Mavinda, Students' Advocate can show a table of jaded Commander players that Mono-White's got a few more tricks up its sleeve than are readily apparent.

Thanks for reading, and may your life total never drop below 1