For those of you completely new to drafting, the concept is simple. A number of players (usually eight, but it could be as few as four and as many as twelve) sit around a table with three booster packs. Each player opens his or her first pack, looks through it, and selects a card. The players then pass the packs to their left. This process continues until all of the cards from the first pack have been selected. Then, the players open the second pack, select a card, and pass the pack to the right. Once that pack is gone, players then open the final pack, select a card, and pass to the left again.

After all of the cards have been selected, you will have forty-five cards in front of you. You must then construct a deck of at least forty cards including basic lands.

Drafting can be overwhelming for new players, so I created a simple guide to follow when drafting. Keep in mind that this is a beginnerâs guide. If you have ever drafted in a Grand Prix or the Top 8 of a PTQ, this article isnât for you. If you are wondering why you are always losing in the first round of a Magic Online 4â3â2â2 or at FNM, you probably want to give this a read.

First, know your format! What booster packs are you going to be drafting? Itâs a good idea to know what cards are in those sets. For example, if you attend a Booster Draft at FNM, you will probably be drafting one pack of Dark Ascension followed by two packs of Innistrad. Itâs going to be beneficial for you to have some understanding of the cards you are going to be playing with and against. The common themes are Werewolves, blue and white flying Spirits, flashback cards, and milling your (or your opponentâs) library.

What if you were drafting something like Scars of Mirrodin block? The types of decks in that block were heavily artifact-based decks and infect. You should either probably be looking for a lot of artifacts or ways to kill them or creatures with infect and cards with proliferate.

Obviously, itâs difficult to know every theme from every set, especially for new players. At the PAX East convention last weekend, one of the popular Draft formats was Twisted Draft. In Twisted Draft, players were given three booster packs at random. They actually picked their boosters out of a paper bag. They drafted sets such as Invasion, Ravnica: City of Guilds, Mirrodin, and Eighth Edition. In Twisted Draft, it was a lot more difficult to develop a strategyâyou never knew what was coming.

So, how do you know what cards to pick in your Draft? There is a simple acronym that is commonly used as a guideline for pick orders. That acronym is BREAD. You want to make your picks in the following order:

Bombs are super-powerful cards that are hard to deal with. Usually, if you play a bomb, unless your opponent answers it quickly, you will win the game. In DKA ISD ISD Draft, Olivia Voldaren, Sorin, Lord of Innistrad, Reaper from the Abyss, Geist-Honored Monk, and Bloodline Keeper are all considered bombs.

If you are unsure of what a bomb is when evaluating a pack, ask yourself these questions:

Bomb cards should be picked immediately if you see themâthey are the most efficient ways to win games!

The next cards you want to be looking for are cards that remove creatures or other problem cards. This can include burn, destroy effects, or creature enchantments such as Claustrophobia or Bonds of Faith. Removal is very important in Draft decks, and usually, the more removal you have, the better your deck will perform.

Not all removal is permanent removal. Some spells, such as bounce effects, only remove the creature for a short period of time. Although not permanent, that turn in which the creature is in your opponentâs hand will allow you to put significant pressure on him. Your opponent then has to spend all of his mana to recast that creature.

Some removal doesnât actually kill a creature directly, but it does so in combat. Spidery Grasp, Skillful Lunge, and Moment of Heroism are some examples of this. These cards are commonly referred to as combat tricks.

Finally, some removal doesnât look like removal at allâitâs just a creature with flash. If your opponent attacks with a 2/2, and before blockers, you cast Nephalia Seakite and then block the 2/2, you just used your creature as a removal spell. Flash creatures are also considered combat tricks.

Here are some examples of what removal to look for in DKA ISD ISD Draft.

Next step in drafting your deck is picking up creatures that round out the deck and fill up your mana curve. You want to be able to cast a creature every turn if possible. Therefore, itâs important to have guys that have different mana costs. A good rule of thumb is to have between thirteen and seventeen creatures in your Draft deck. Take a look at this deck that I recently drafted: 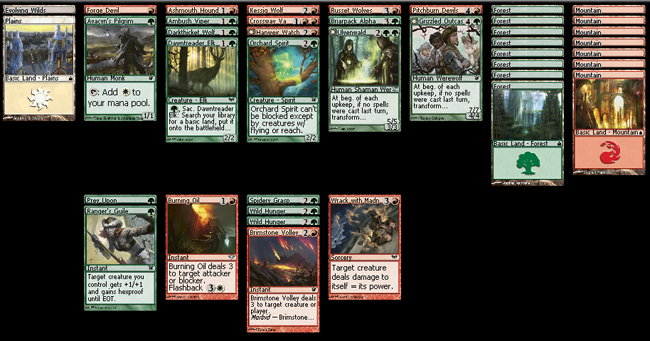 As you can see, I have fifteen creatures that I can cast on every turn of the game, and the bulk of my creatures cost 2, 3, and 4 mana. Itâs very important to use your mana every turn, and ideally, you want to play a 2-drop on turn two, a 3-drop on turn three, and so on. Missing on your creature drops will cause you to fall behind your opponent and lose tempo (the speed at which the game is played). Keep your mana curve and creature count in mind when drafting, and you will have an advantage in your games.

The last types of cards you will be drafting are the bad ones. These are the cards that you will be picking up toward the end of the pack and usually donât want in your deck. Cards such as Altar of the Lost, Favor of the Woods, and Wreath of Geists are all cards that you shouldnât be playing.

These last five or so picks in each pack are the picks where you should keep your sideboard in mind. Yes, you do have a sideboard in Draft. Any card you donât end up playing becomes your sideboard, and you can sideboard any number of cards in between games. It doesnât even have to be a one-for-one swap.

The situational cards that arenât good enough for your maindeck but can be great in certain matchups are the types of cards you should by picking up for your sideboard. Obviously, Urgent Exorcism is good against enchantments and Spirits, and Ancient Grudge is good against artifacts, but there are some subtle sideboard cards that you should be aware of.

For example, if youâre playing a R/G mirror match, and you need some way of pushing your guys through for damage, you might want to bring in Nightbird's Clutches or Cobbled Wings. If you are playing against a green deck with no removal, Spectral Flight might be a good choice. I lost a match once in which I was playing a slow control deck with a lot of removal. My opponent sided in two Curse of the Pierced Heart and a Curse of Thirst, and my amazing U/B deck just couldnât deal with those enchantments.

Okay, so now that you know what cards to look for in Draft, the next step knowing what colors to play. Basically, you have two options: forcing and signaling.

Forcing a color is when you choose what color you want to draft before the Draft actually starts, and you take cards of that color no matter what. This mostly occurs in a format in which one color is significantly better than the rest or there is a gimmick archetype that people like to draftâsuch as Burning Vengeance or self-mill. Back in Scars block Draft, I used to like to force the Furnace Celebration deck. Often enough, people just force their favorite colors for no reason.

Usually, if someone opens a bomb rare, he will then begin to force that rareâs color. If I open Olivia Voldaren, I am going to force B/R no matter what Iâm passed.

Forcing a color or archetype can backfire. Sometimes, you will find no cards of that color and end up with a bad deck; or, you will fight with your neighbors over a color combination, and you will all end up with bad decks while the person who is drafting the deck that you should be drafting will receive an amazing deck and win the Draft easily.

I rarely force colors or archetypes unless I am drafting with friends or testing for a new Draft format and want to explore certain strategies. Forcing is a bad idea at high-level events, and I donât recommend it.

Take a look at this first pack:

Our options of what to first-pick are Wrack with Madness, Immerwolf, Strangleroot Geist, and Griptide. The strongest card in the pack is probably the Immerwolf. If we take the Immerwolf, our neighbor will probably take the Wrack with Madness or the Strangleroot Geist next, which means he will be in the same color as we are. That is not sending a good signal!

Now, take a look at the Griptide. Griptide is a great card, and itâs the only blue card in the pack. If we take it, we are sending a signal that we are not drafting red or green. Our neighbor will probably take the Immerwolf next, and the person after that will take the Wrack with Madness or the Strangleroot Geist. As long as we continue to take blue cards, that will put us in a good position as the only blue drafter that we are passing to, and we will be rewarded in pack two with all of the good blue cards.

Okay, so we took the Griptide. We then took a Tower Geist, a Stormbound Geist, and another Griptide. Our fourth pack looks like this:

We could now take the Headless Skaab and stick with taking blue, but there are a lot of good white cards in this pack. Remember that four other people saw this pack before we did, and they did not take these white cards, which means that there is a good chance that the players passing to us are not in white.

In addition, the people we are passing to are in red and green, thanks to our signaling, which means that they will most likely be passing up these white cards as well. Now would be a good chance to pick up white as our second color.

Signaling does not always work out the way we want it to. Remember that some players just force what they want, which means all of our attempts at signaling would be pointless. However, with enough practice, sending good signals and reading your neighborsâ signals will work out for you most of the time.

Now that you have the basics down, you are ready to draft at your local shop or on Magic Online! I hope that youâve found this primer helpful. As always, thanks for reading! Be sure to follow me on Twitter @AllWeDoIsWinMTG.