Mike Robles here. Hot off the heels of Dragonâs Maze release weekend, Iâm here to bring you a fresh batch of treasures that I found just for you. Yes. You. Just donât tell anyone else. This will be our secret. Letâs dig in to see the best treasures I found (this week). 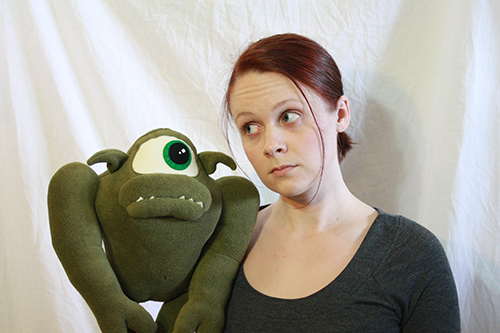 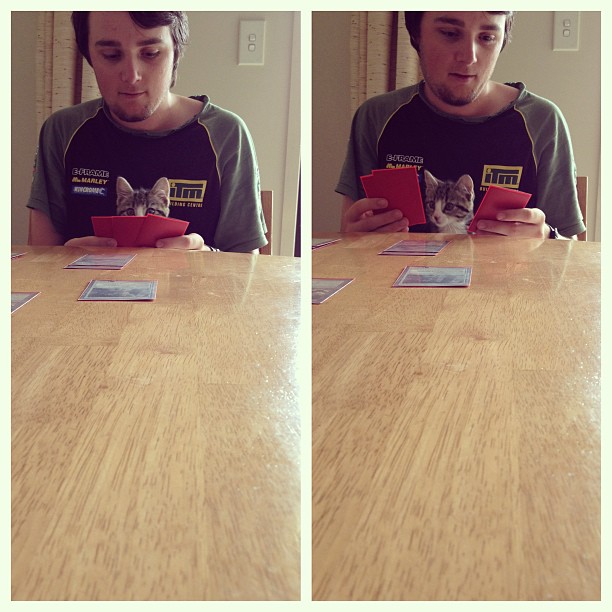 Iâm not much of a cat person, but cats can be adorable. Thereâs one thing the Internet loves, and that is cat pictures. They canât get enough of them. Cats love to be the center of attention, and anytime there are friends at the house and weâre drafting, our cat is all about it. She climbs up on laps, tries to swat at cards, and will even stop your hands from moving to force you to pet her. I can relate to the above photo. Cats can be adorableâ.â.â.âeven if they are hellspawn.

This link was posted to my Facebook wall by my own fiancÃ©e, Tifa Meyen. I donât know what kind of parent Iâm going to be. I know what kind of parent I want to be. I am hoping that when Tifa and I have kids, theyâre going to be just as nerdy as we are. I want to allow them to make their own decisions, but Iâm going to introduce them to the world and help them keep open minds. I want to teach them to love everything and everyone. I want my children to have no fear of the world. I want my children to be free of bullying, prejudice, and hate. What Iâm trying to say is I will do my best to raise my kids and teach them right from wrong. BUT SO HELP ME IF THEY DONâT PLAY MAGIC: THE GATHERING, THEYâRE OUT OF THE FAMILY!!!

The Blur of Dragonâs Maze

Source: Hipsters of the Coast

This is the part of the article where you say, âHey? Whereâs the photo?â Donât worry, Iâm getting to that. First, I want you to imagine what it would be like if you were able to have all the epic artwork from every Dragonâs Maze card put together into one card. It would be amazing, right? It would make for an epic mural of Dragons, Weirds, Elves, and more. It would be a massive display of the race to the Maze's End. Well, feast your eyes on this. 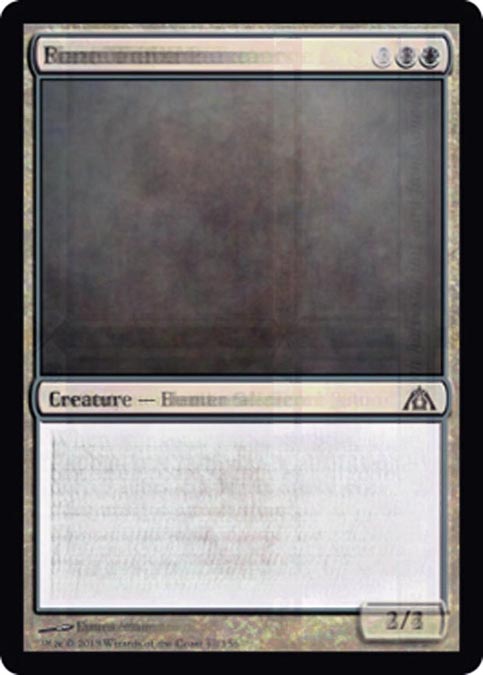 What did you expect? I will admit this photo of every card put together looks intense. You can see outlines of the split cards, you can make out some sort of power and toughness, and the greyish-gold hue makes the card seem otherworldly. 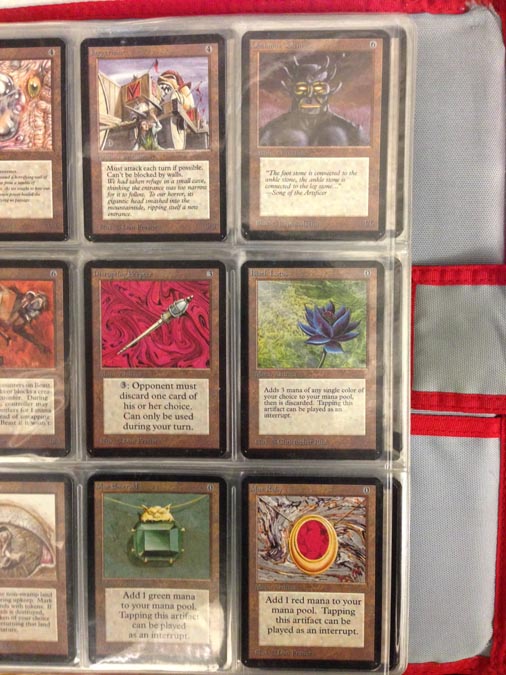 Ever since I started my articles here, some of my friends have taken a much greater interest in sharing Magic: The Gathering items with me. This picture was texted to me by my friend, Rob Coster. It had the accompanying text: âCoworker brought these in. Best condition Iâve ever seen.â I donât know whatâs more impressive, the fact that this guy owns a binder full of Alpha and Beta cards or the fact that heâs crazy enough to take them into a workplace! Either way, I need to start visiting Robâs office more often. 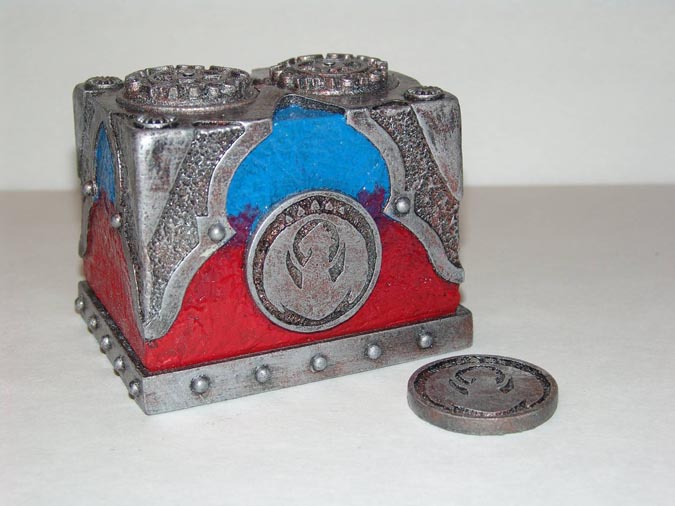 Where do I even begin? Look at this thing. The paint scheme, the guild symbol, and everything about this is magical. The fact that it can hold up to a hundred sleeved cards is also a major draw to me because I love Commander. This box is perfect for any Izzet fan in your life. I wish I had it to go with my new Melek, Izzet Paragon Commander deck Iâm working on. Every time I play that deck, I would attach fireworks to the deck box to go off when I dealt damage. True Izzet fashion.

Tonight, This Is Happening 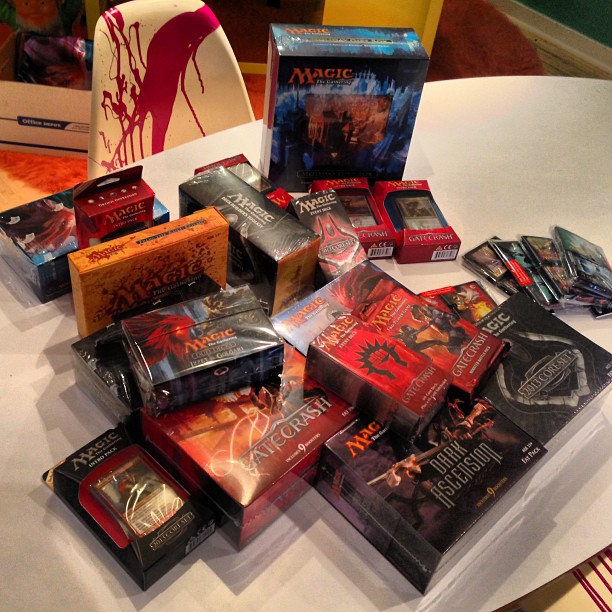 Itâs no secret that Felicia Day is part of Geek Royalty. Her hit series, The Guild, helped with the nerd renaissance over the last few years. Sheâs known for playing video games and sheâs known for playing D&D, but has she every played Magic before? Well, it looks as though she has enough stuff to get her started. Who knows? Maybe now weâll see a new web series thatâs The Guild meets Magic: The Gathering. 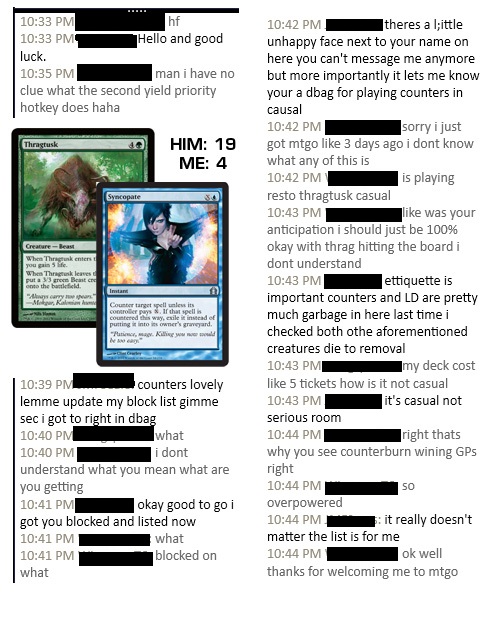 I wasnât going to talk about this in my article. My articles are meant to showcase some of the most awesome things from the Magic community. But I canât ignore this. The Magic community should be welcoming to players old and new. Itâs about mutual respect. Iâm not going to point out everything thatâs wrong with the conversation above, but I do want to say that this is not acceptable. This is a reminder that we need to be better at welcoming everyone. Please.

A good week for tweets! Check out these tweets that cover Dragonâs Maze release weekend and more!

Very first #mtgdgm pack I open has a Sire of Insanity and a foil Deadbridge Chant. Seems fine. #mtg

Drafting with a pauper cube at Lady Planeswalkers night. We play #MtG the RIGHT way: with wine. twitpic.com/cnqqso

Thatâs a wrap! I do hope you enjoy reading these articles as much as I enjoy writing them. I receive a ton of tweets, texts, and e-mails showing me amazing community treasures, and I appreciate every one of them. If thereâs something youâd like to see, be sure to hit me up on Twitter! Until next time, this is Mike Robles saying: 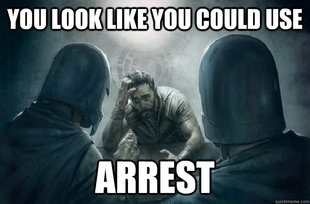