The original Modern Horizons gave us literally dozens of new tournament Staples. For Modern, obviously; but forging forward in far-ranging formats, both bigger (and sometimes) smaller as well.

Giver of Runes became a key contributor to both Selesnya combo decks and White Weenie variants; and came with Ranger-Captain of Eos who would sometimes help find it. Force of Negation gave Control decks some much needed defensive deck speed. While on the other end of the spectrum Urza, High Lord Artificer and Yawgmoth, Thran Physician were both Legendary Creatures that spawned all-new archetypes.

Firebolt was the more heavily played one-mana flashback spell the first time around; but Lava Dart proved more popular in the Modern world of the original Modern Horizons. The latter helped make cards like Monastery Swiftspear and Soul-Scar Mage even faster and more lethal; while Seasoned Pyromancer did something completely new for Red Decks. It made for a more mid-range option, while doubling down on the mid-ranginess of actual mid-range strategies like Jund.

Wrenn and Six made the leap to Legacy! And so did Arcum's Astrolabe... Before it got banned there. And in Modern. And in Pauper.

None of those are even the good cards!

Very happy to play eight copies of these Horizon Canopies; especially in my single-colored Red Decks.

How about Modern Horizons 2?

A few weeks into spoilers, it looks like an absolute tidal wave. Modern Horizons 2 is going to knock down some old edifices and wash away some sub-optimal card choices. There are multiple spells that simply take the mantle of "better at whatever you were doing before with whatever they had previously given you to do that". On the other end of the spectrum are cards that will make it impossible for people to play. Like, literally. We'll get to all that in a bit.

I predict that all eight of these cards see play - in some cases heavy play - and in many cases change the rules of Modern engagement in the next few months. 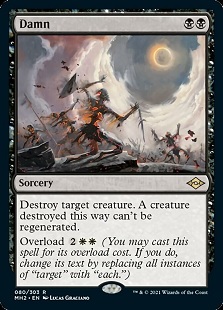 This one is the layup.

Damn is just good old Wrath of God when you want it to be... But can be faster defensively in decks with access to Black mana. Wrath of God with upside is not all upside, as Damn can be taken by Inquisition of Kozilek (when the original couldn't). Counterpoint: This one has play against Gaddock Teeg.

For what it does, Damn is more-or-less the best ever. In non-Black decks look for this to share space with some of the other options (probably in deference to Meddling Mage); in Black ones, it's likely to take precedence, filling all the sweeper spots before considering Wrath of God or Damnation.

Speaking of the best ever...

What's the better creature? Emrakul, the Aeons Torn or Deathrite Shaman? Who's the king (or queen) of card drawing? Griselbrand or Stoneforge Mystic?

Speaking of the best ever... Ragavan, Nimble Pilferer is probably the best fair Red 1-drop of all time. It might not be the best overall (because of cards like Goblin Welder and maybe even Goblin Lackey)... But it's likely the new title holder among the fair set. This, by the way, is coming from someone who wrote articles on Monastery Swiftspear on consecutive weeks earlier this year.

Every time you hit with Ragavan, Nimble Pilferer you potentially draw two cards. One of them is always a Lotus Petal, but that can be productive as I'm sure you know. The other is bound only by your imagination and the opponent's deck-building costs.

This card is simply insane. It doesn't have a lot of toughness, but it is almost the definition of must-kill. This card is a monster in the mirror or any kind of quasi-mirror. Sure, Red Decks have a lot of applicable removal, but they don't always have it. And when they don't...

Ragavan is also great for Control decks any time they would consider siding in a Robber of the Rich. He's just a faster Robber with extra up-side for matchups where it wouldn't make sense for the opponent to keep in removal. Punish them.

While Ragavan doesn't have haste fundamentally, it has haste in a pinch. Plus, Dash is actually more useful once you have a lot of mana. If for no other reason than you can dodge 100% of the opponent's Damns. Which, I heard recently, is the best ever at what it does.

What was that play sequence again?

They play Ragavan, Nimble Pilferer. We lay down a tapped Hallowed Fountain?

Chaos is about to ensue, right?

Not if you have Solitude! It's probably worth the pitch on turn two just so the opponent doesn't start drawing extra cards on you. Solitude's speed is even faster than turn one. Awesome. Its Force of Will-ness can bait and juke the opponent into foolishness, tactically. "You're tapped out, huh?" Famous last words!

Solitude's free spell version is why anyone is talking about the card, but Solitude Classic is both potentially surprising and a great way to catch up in certain duels. That lifelink ain't no joke.

Liquimetal Coating is consistently played in Modern decks with Karn, the Great Creator. Karn can find bullet Liquimetal Coatings which can themselves then team up with the Karn already in play.

In one word, Liquimetal Torque's second ability makes it very, very different from Liquimetal Coating. You cannot use the new version to target lands; for Karn, that is much of the fun! But all the other activities are there. So why do I think this card will be a successful contributor to Modern Horizons 2 Modern? The strongest point to me is that certain versions of Tron already play main-deck Mind Stone. These Karn decks seem to like two-into-four already, and main deck! This card can help make a quick Thought-Knot Seer on turn three, then freeroll later with the help of Ugin, the Ineffable.

When the nice people in Renton, WA decided to print Miracles, their objective was to make the Draw Step more exciting. Alexander Hayne immediately won the Miraculous Pro Tour with Terminus and Entreat the Angels, though Bonfire of the Damned was the payoff to many a tense upkeep. You be the judge how "exciting" that ended up:

Every ability on this card is basically "fine". The thing is... This card only costs two but you get two of the abilities! Two mana; two bodies; two power and you gain three life? Selesnya creature decks routinely sided in Blessed Alliance just for the life gain against Burn decks. The level of upgrade here is staggering. What a sideboard card!

Verdant Command may not be the best graveyard hoser ever, but it's pretty comparable to once-sometimes-good enough Role Player Headstone. You don't get a slow card draw but another card's worth of option; and on time.

My guess is that the we're going to have to deal with a lot of chatter in the coming months, but all the accessory abilities have value.

On its face, this is "just" a Jund-Noble Hierarch. Personally, I kind of dislike how it gives Jund colors Exalted, but maybe I'm just a crusty Boomer. Setting that aside, I think Jund colors in Modern will appreciate this package more than Bant colors.

Is Ignoble Hierarch good? Obviously? No! "Good" isn't good enough a word! But is it so, So, SO much better than Noble Hierarch, Birds of Paradise, Avacyn's Pilgrim, or a dozen other mana acceleration options?

Look at its types.

Ignoble Hierarch is a GOBLIN.

This is a card that is going to slot into Green decks where color-appropriate. On top of that, it's going to impact Goblins decks in ways we can't yet fathom. Turn two Goblin Warchief? That used to cost us the body of our Skirk Prospector. This card will help Goblins more easily translate their sometimes-massive materiel into battlefield expansions... Especially when the super cheap Ignoble Hierarch starts off with Haste.

A few years back I did a series of blog posts and podcasts around the card Silumgar's Scorn.

"Silumgar's Scorn is a messed up Magic card" is a pretty good summary of my feelings. I ended up getting back on the Pro Tour after ten years off (blame fatherhood more than anything else) with a ridiculous deck anchored by Silumgar's Scorn. Ridiculous in the extreme (it was Mono-Blue but ramped up to Dragonlord Atarka)... WotC R&D declared it the most interesting of the RPTQ season.

I paid hefty deck-building costs to play a card that was an overcosted Force Spike in its fail-state. Because when it was not in fail state, Silumgar's Scorn could aspire to Counterspell.

Well I guess we can now switch to "Counterspell is a messed up Magic card" because in a set of best-evers - Damn; Ragavan, Nimble Pilferer - there is a card that one that is expressly NOT the best ever [Mana Drain]... But simply far and beyond anything we could have imagined they would actually print.

This is going to change the landscape - or at least force a large number of players to look deeply at their deck choices - in ways that are difficult to predict right now. The ability to declare an unfettered "No" is powerful. Not just because it forces combo mages to consider whether they should be going for it... But because it emboldens the Azorius wing (or maybe Jeskai wing thanks to Ragavan after boards, or Esper folks due to Damn) to exist at all. When I first started winning big tournaments with Burn decks a few years ago, my pithy quip was that you could not play a deck in Modern that didn't goldfish inside of four turns.

If you don't see what this thing is going to do to Modern, one of two things is probably blocking your view.

Cursed Totem turns off creature based combo decks. Full stop. There is no tapping to create a creature token copy with Cursed Totem in play. There is no furious untapping; no sacrifice loops (because you don't have the free sac outlet any more). That in and of itself is a deal. A big deal? Certainly, one the creature combo decks are going to have to think about, but it's not all.

Cursed Totem turns off creature mana. That's what's missing! A lot of cards are templated to affect non-land; or to turn off non-mana abilities. Cursed Totem is not so generous. It flips the switch on every Llanowar Elves and Birds of Paradise. If your land-light deck only runs thanks to help from Druids and Shamans... I guess it won't run anymore because Cursed Totem costs all of two. And any deck can play it.