Kansas City, KS - Adam Clark isn't just a middle school art teacher from America's heartland.Â  He's also igniting the sparks of his Kansas City students each and every week.Â  In Magic the Gathering, you play the role of a planeswalkerâa powerful wizard who fights other planeswalkers for glory, knowledge, and conquest.Â  But it isn't all wizards and sorcery in Mr. Clark's classroom; Magic is a complex game of numbers that is being used to improve his student's math and vocabulary skills while encouraging sportsmanship and a positive atmosphere after school.

In the spring of 2010, the popular Magic the Gathering blog GatheringMagic.com held a contest to see which of its readers were most worthy of receiving a sealed booster box of the latest Magic set.Â  We asked for a short explanation of why you deserved free Magic cards.Â  Furnished by Troll and Toad, we gave away over $100 worth of product to several Magic the Gathering players.Â  Adam's entry stood out as the most deserving cause and needless to say, Adam's story took the Grand Prize. His classroom's shiny new booster-box of Rise of the Eldrazi was shipped off to Kansas!Â  Here's the original entry:

"I work as an art teacher at an urban middle school in Kansas City, Ks.Â  I have a group of students that stay after school every Thursday to play magic.Â  When making purchases for myself all extras go to them as they cannot afford decks/boosters themselves.Â  Magic is a great resource to help with their reasoning/problem solving skills.Â  We would appreciate the cards to teach them the basics of a sealed tournament.Â  The cards would be added to our library for the kids to use.Â  Thanks for consideration, love the site." - Adam, Kansas City 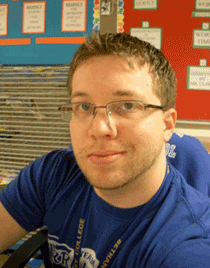 After the contest we contacted Adam to see how his draft went and to get his thoughts on using Magic the Gathering in the classroom.Â  He was also kind enough to provide us with pictures of the students opening up their prize. 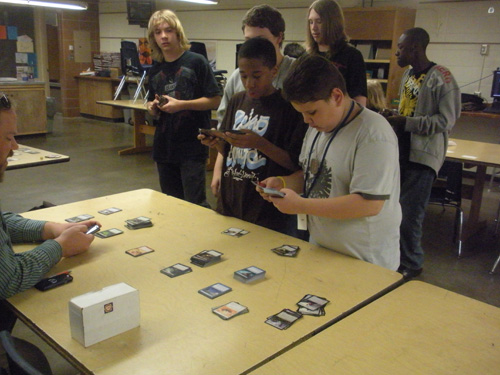 How long have you been doing this program with the kids and why did you start it?

This was our second year with our unofficial Magic Club. Everyone knows we have it, but we don't get funds or anything like that.Â  Not exactly sure how the club started, some students were talking about magic and I offered my room for them to play in (the art room has large tables, rather than having to push desks together). From there it grew by word of mouth, we average between five and twelve kids a meeting.

A normal meeting starts with some games between the kids, using either their own decks or some "house decks" we have. These can be one-on-one or multiplayer (the kids have been big on Pentagram games recently).Â Â  I judge the games here and there, helping to clarify rules or give them a nudge about what move to make next. I also play a few rounds with them, they like to claim bragging rights if they beat me. That's only happened a couple times, but were good chances to teach about losing gracefully and when you should have taken a mulligan.
Can you visit my local Friday Night Magic and teach some of the adults there how to lose gracefully?Â  *laughs* What direct educational benefit does this bring to the kids?
Math, Vocab, and Creativity are the benefits that come to mind the easiest. Basic math skills like addition and subtraction. You can't do upper level math without knowing the basics. Things like fractions and probability when it comes to your deck and chance of drawing cards. Keywords/Mechanics are great for definitions and expanding their word base. Flavor text and strategy along with problem solving skills offer outlets for creativity.
I've given homework assignments after knowing a student's deck.Â  I'll give them some new cards and tell them to study them and then tell me how they would benefit the deck. Rule One: read and know your cards. 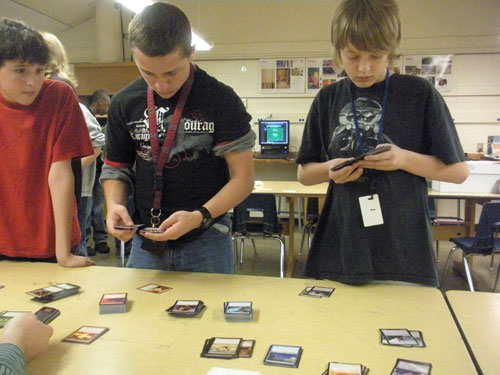 Magic is certainly a game of numbers and mental ability.Â  Any other specific examples of using Magic as a teaching tool?
We discuss with students that a deck should be around 60 cards, 36 spells, 24 lands. Many students have decks with a card count of 70 or 80. Explaining that having a 4/60 chance of drawing what you want rather than 4/80 is an easy way to use fractions with them. 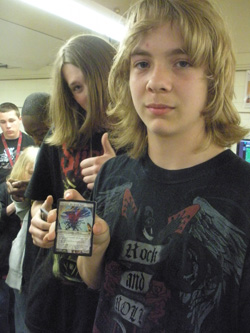 Explaining keywords or mechanics can be accidental vocab lessons. A student asked "Mr. Clark, what does vigilance do?" Instead of just saying that it means a creature doesn't tap to attack we talked about the root word vigilant, meaning alert and watchful, which helped them to better grasp the concept of the ability and the word as well.
Trample is an awesome practice of basic subtraction, which many of our students need. They don't realize they are using it when figuring out exactly how much damage will be going through to their life points.
Magic also helps with abstract thought processes and problem solving.Â  Do I use an instant spell now or later?Â Â  What's my strategy to win?Â  Large creatures?Â  Direct Damage?Â  Milling? The have several opportunities to think in new ways.
Do you do this after school or during the regular school day?
Our usual meeting time is Thursday after school, 3:00-5:00. I keep a strict policy that if your cards are out during the day, aside from free times like lunch, then they are taken. School during school hours, Magic during Magic hours.
How old are the kids?
Our kids range from 6th to 8th grade. We've also had a couple students, who are now in high school, come back to assist and work with the students.
That's great! What do parents tell you about what you're doing?Â  Have you had any negative responses?
Last year we had a mom that would come about an hour before it was time to go, she would watch the kids play and chat with us. Some of the other parents had even played and would reminisce about their own experiences. I've never gotten anything but positive feedback and thanks for giving the students a place to play.
Do you play Magic yourself?Â  Tell us about your own history with the game.
My first experience with Magic was in high school, I bought a booster pack at a county fair and really liked the art on the cards. I never went any further than that until after college and teaching. The art is still one of the driving forces behind my love for Magic.Â  I have been playing for about 2 and a half years. During some down time the summer before starting our Magic club my roommate introduced me to Magic.Â  It gave us something to do and was a fun new pastime. I felt like I had evolved, having played Pokemon in high school, Yu-gi-oh in college, and finally I had a card game for my "adult" years (I'm only 27, still not feeling that adult yet, working with middle schoolers helps). My first block set was Alara.
I've run the gamut when it comes to decks. Started Blue/Black, really enjoyed Bant decks with Alara, and my new favorite is an all red Defender/Kazuul, Tyrant of the Cliffs deck. 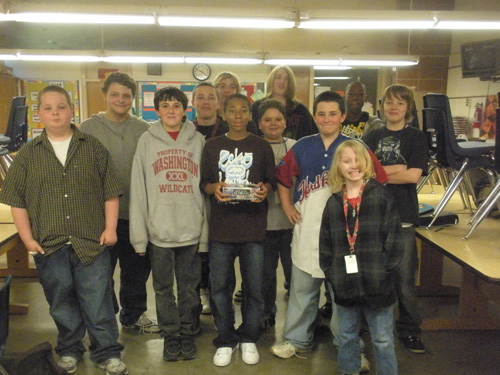