Long flavor reviews are about as popular as JC Penny.

Yes, we can analyze closely the art and what it means to the storyline, but frankly, Dragonâs Maze has an unfinished story. Any buildup we can infer will probably be wrong anyway.

If you didnât know, Doug Beyer, creative writer and writer of the very hopeful A Voice for Vorthos Tumblr, has written a few small e-books called The Secretist. Parts 1 and 2 are out, and Part 3 explains what happens in the maze. In other words, we find out who wins and why Niv-Mizzet decided to do a Legends of the Hidden Temple race. This makes any inference/visual storytelling really just guesses instead of searching for clues. Visual storytelling is normally the de-facto choice to understand whatâs going on.

Instead, Iâll go over five significant artworks and give you some insight into one particular piece.

Letâs dive into the maze; be sure to bring your medallion.

As many people ask me about these, âfinding outâ what is digital really isnât that hard. Just look at the strokes away from the center or faces of the piece. For example, letâs look at Rakdos Guildgate and see if we can tell why itâs digitally made. 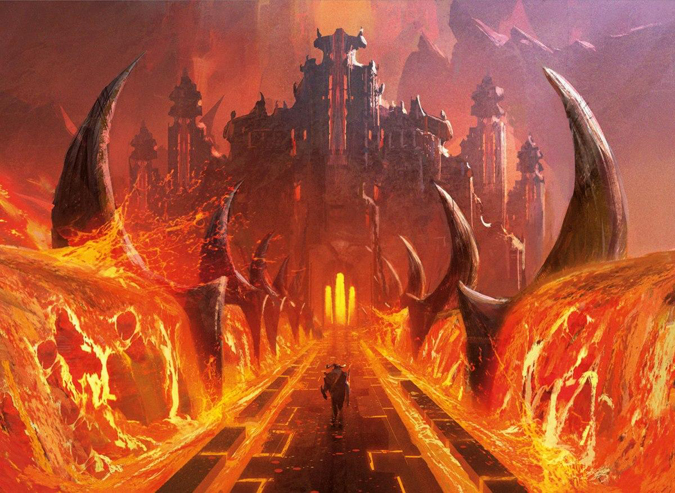 Take a second to look at the imageâjust a âhuh, okay,â and then click on the Guildgate image. Look at the focus areas.

Notice how they push from the outside in. Thatâs an art director, well, direction. All of them pulled out, and in order to achieve that, we need sight lines to draw us inâlines that naturally move our eye into something. In this case, our eyes are moved to the fiery door at the end of the path.

How to know itâs digital is to find the focus lines and then look a bit outside of them. Sometimes, itâs on the edge; sometimes, itâs below, but youâll find out. 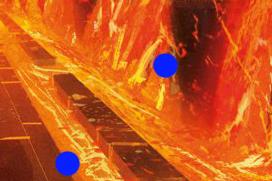 Look at the two blue dots.

Notice the digital Wacom tablet squiggles in the lower right?

No physical paintbrush gives that opacity and consistency of colorâ.â.â.âyet.

See how itâs slightly transparent despite being consistent in color?

Look for this sort of stuff in corner underbrush, lava, side buildings, and so on.

Be careful with clouds; theyâre quite hard.

If the artist has a CGHUB.com webpage, theyâre often digital.

If, on the artistâs website, he or she says, âOriginals for sale,â obligatory duhâtheyâre traditional.

With that lesson out of the way, letâs see who is digital and who isnât in this set. If you want to purchase a print or original oil painting, contact the artist directly. Google works well despite what Bing says. Find the artistsâ websites and just ask them. Just buy both paintings if you want half of a split. Just like the Werewolves, get both sides. Youâll be happier in the long run.

Of the thirty artists, twenty-one are now digital illustrators. Now, that isnât to say they only work digitally; that isnât true at all, but for Magicâs sake, theyâre digital. In fact, I know that Noah Bradley isnât digital from time to time, which is also true for Aleksi Briclot among others.

What is notable is that these nine artists painted twenty paintings, making a total of 8.55% of the art traditionally created. I donât trust the mad dash for buying all the art since itâll all be digital in no time. Traditional paintings will always remain, but the amount is to be argued, sure. If you receive print sales no matter what, is the original painting going to be worth the extra materials and time? Itâs a hard question, but we will come back to this In future articles.

Notice that these are also not all digital. Simma down now.

Now that we have that short soap box yell out of the way, letâs dive into what I feel are the most notable artworks of Dragonâs Maze.

These are not in a particular orderâwell, I lied; they kind of are. Youâll see in a minute here.

Iâve seen Vorthoses throw opinions at everything, and frankly, itâs grown old on what is âThe Bestest art of MTGâ on every blog, ranked by âimportanceââwhatever that means.

Art is to be appreciated, and there are artworks I absolutely hate in every setâ.â.â.âbut thereâre a lot of people who love that art and will hate my face. Homogenization using the style guides, despite being pointed at as being negative, pushes a better top-down immersion into the setting, and frankly, it allows for a few outliers to keep it interesting and fresh.

I found a bunch of Easter eggs, but weâll talk about those later. You know those are my jam. Artists? Hide more stuff; Vorthos loves that. 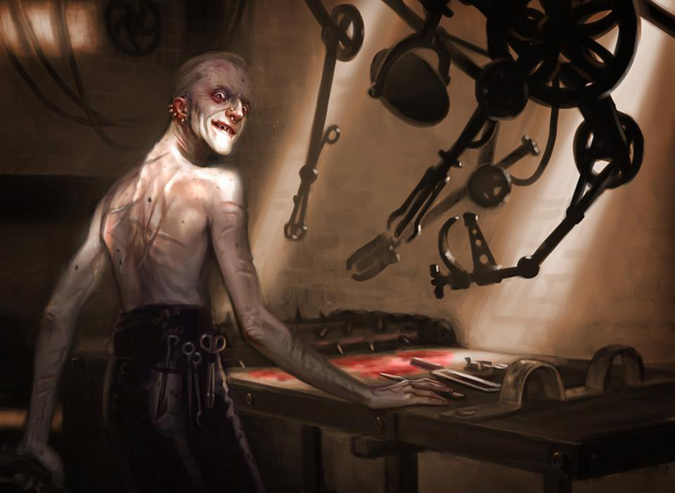 Despite it not being a chase-rare tournament card, itâs significant.

This top-down design is incredible.

For a little deeper insight, on her Facebook page, Winona posted an artwork, and an absolute nugget was shared:

He does totally look like Ninja from Die Antwood.

Also, Nick Kay, in case you didnât know, was a former Magic R&D intern and a successful illustrator (we worked together!), and he just got a job as the lead concept artist for Privateer Press. Best of luck to Nick! 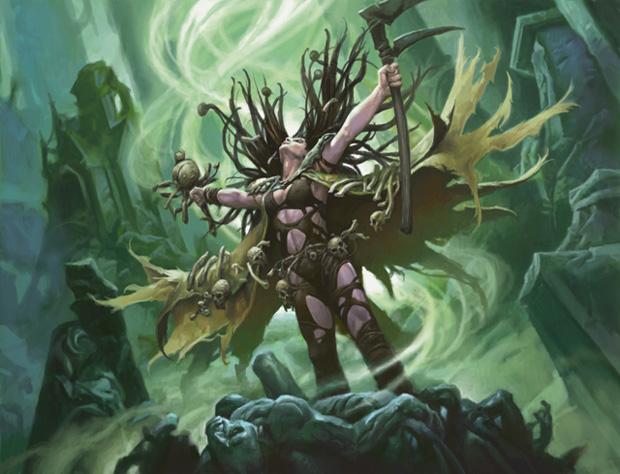 That figure looks like Savra, former Golgari guild leader who is very much dead.

And by âit looks like,â I mean, It is Savra: 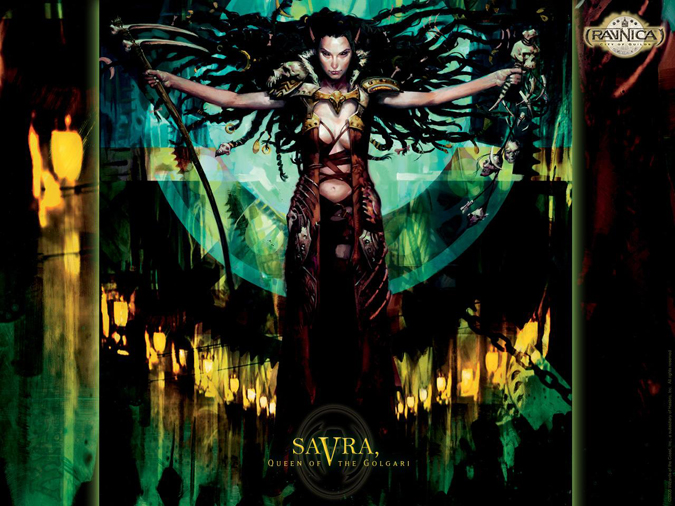 Look at the hair and clothing.

Does it matter that this could be a piece of slushâa bought commissionâand reused now?

Itâs an amazing piece, and a simple hand-wave could explain that she had people dress like she did.

Hell, have you been on Instagramâs random button during the day? Every eleven- to fifteen-year-old looks like Justin Bieber. Itâs atrocious.

Could Savra have been in the style guide this time around?

Were Borosâs other images slush artworks?

What also makes you wonder: Is Zoltan Boros a Boros? I hope so. It would be awesome. 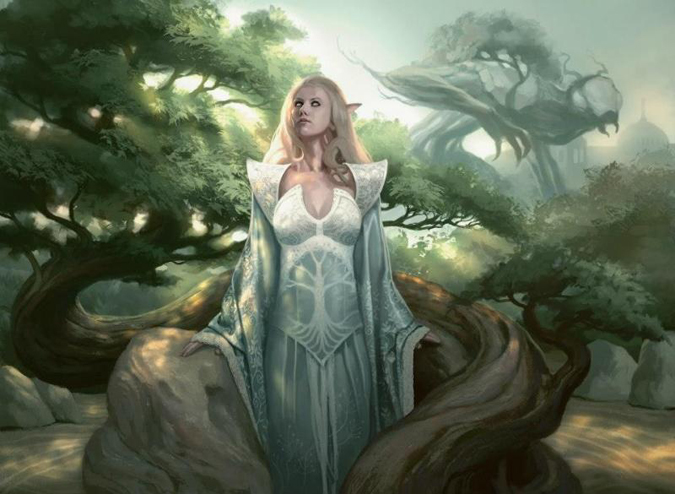 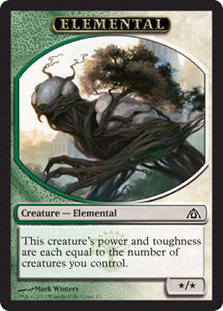 We all know that it was swapped last minute, sure, but dilute you Haterade for a minute and applaud the creative teamâJeremy Jarvis most notablyâfor trying to do some of that old-school art direction.

We used to have connecting pieces all the time back in the day. Ever see Terese Nielsenâs Legacy Weapon? Good lord, it has all the things in it. I could take an entire article on cards referencing other onesâthe good, the bad, the comicalâbut this is quite rare these days.

Letâs just be happy that Mark Rosewater wrote about it on his Tumblr. Enough people cared that an official response was warranted. Even Elaine Chase had to confirm from this and Bradyâs position being eliminated that the story is in good hands. The art was such a bulls-eye hit that a top-down design flowing with flavorful goodness was, yes, something we want. Granted, Vorthos does a lot of yelling, sure (Iâm not linking to forum posts; you know who you are), but when things could be perfected, we all bind together.

Jarvis, valiant try. I notice what you did there, and I appreciate you caring so much. I was often questioned at my previous art gig due to digging too deep into art. I know the team probably pushed for it, too. Please thank them for all of us flavorphiles.

Also, Mark Winters, you did great; keep up the good work.

4. Bred for the Hunt by Karl Kopinski 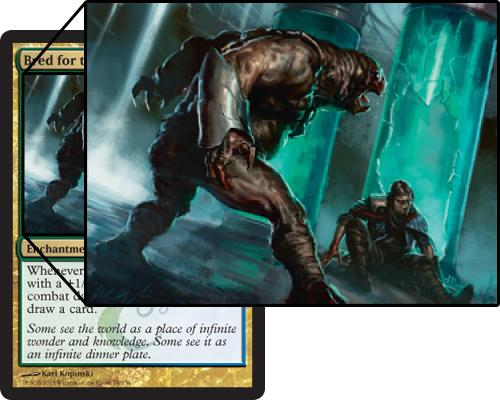 I saw this after David over at theartofmtg.tumblr.com posted about it. (Reposted? Itâs Tumblrâtechnically, all the things are reported.)

I have all the comics. There are piles of side stories, and ample numbers of Vorthoses just want an homage to some of that old-school flavor. Granted, itâs a bajillion years ago now, but this is a step in the right direction.

Emmara is the other example of someone being elevated from the storyline.

This means that every character that has a name and could potentially be a card.

I like it because every person we hear about is now relevant. Speculation threads will get leads fromâ.â.â.âVorthos? Frickinâ sweet.

5. Maw of the Obzedat by Randy Gallegos 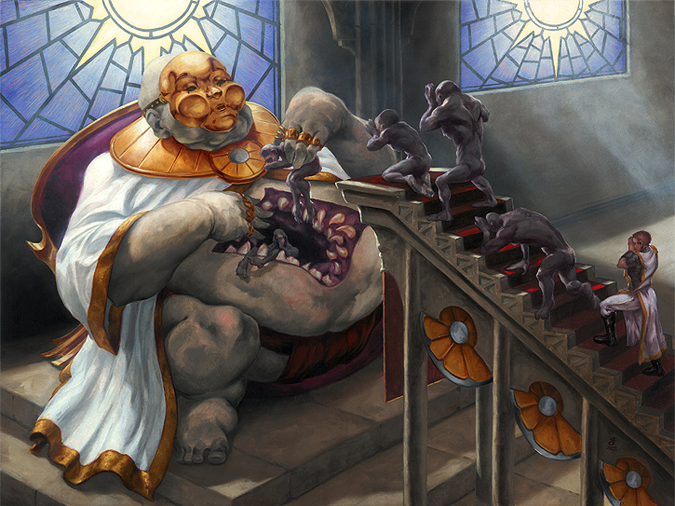 This piece needs an entire section.

Weâre lucky because we whipped through the Silver Monkey fast and found half a pendant! 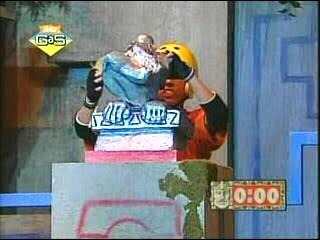 Itâs upside down, yo.

To look at the Maw, I talked to the man himself Randy Gallegos. (Itâs pronounced âguy-A-goesââweâll try to put a sound bite on here soon. Itâs not âGALL-uh-goes.â)

Mike: Randy, thank you in advance for this. Letâs go!

Mike: Randy, Maw of the Obzedat appears to be very much outside your style, and yet, you pulled it off. Similar comparisons are being made to Rebecca Guayâs Heartmender as a styleâ.â.â.âvariation, if you will.

Can you discuss the prompt and anything Jeremy Jarvis stated for this piece?

Randy: Jarvis has sometimes made very surprising choices like this. I think he sometimes wants to do this, on purpose, for the sake of throwing a curveball rather than playing it safe with each artistâs preferences. Of course, in any given set, it could also be as simple as filling out a spreadsheet of hundreds of assignments, seeing a couple of pieces left, and having few choices of illustrators to work with. Not sure in this case.

Mike: What was your inspiration for the piece? I personally see a Pink Floyd The Wall reference: 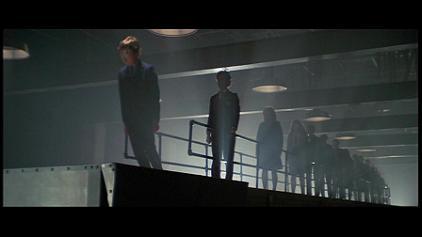 Mike: I also see a possible Satan eating humans like at The Scrovegni Chapel/Arena chapel, a common medieval motif to put on church entryways, but we'd love to hear. 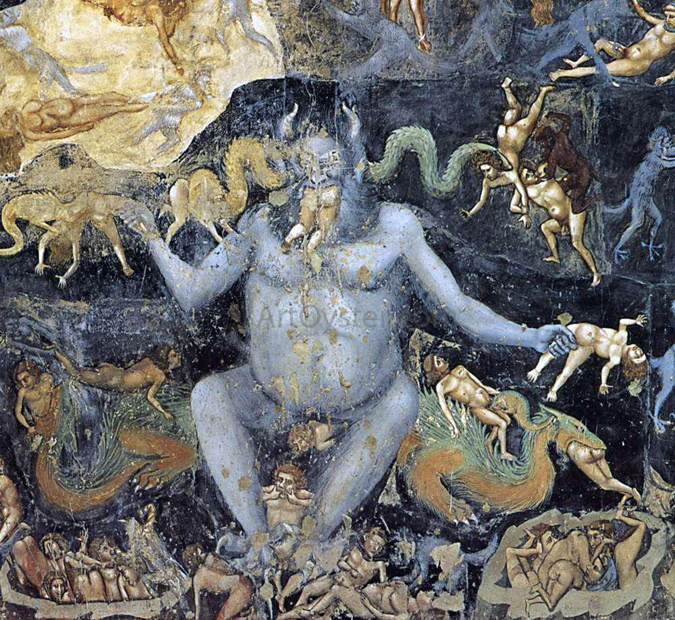 Randy: Well, those are certainly images in my own mental bank, too. It's hard to say which of any directly affected me. I would add the Sarlacc in there, too. Yeah, that was probably the main thing. As for the absurd, well it was difficult for me to go all-in on the terror of it, which might've had the camera closer-in. 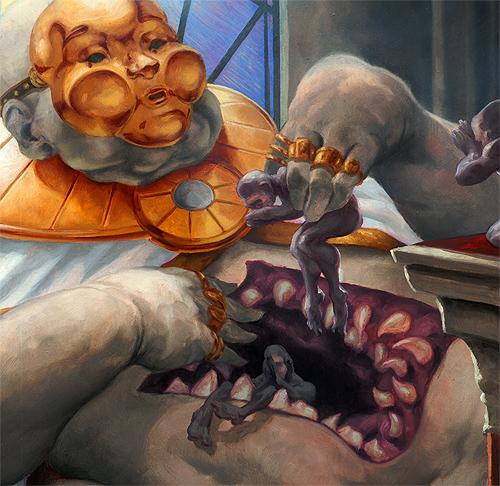 Mike: Facepalm! Duh. I even worked on Star Wars. Woof. 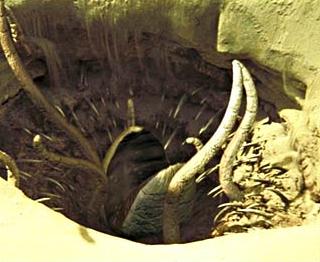 Mike: Is the original art and sketch Maw of the Obzedat for sale?

Randy: Yes and yes. The sketch was done on two sheets of paper so I could position the foreground stairs on top of the figure with more flexibility. The front layer (the steps) probably disappeared, as it wasn't much worth keeping.

Mike: Will this piece be at Spectrum Live? (For the readers, itâs a big art convention in three weeksâ.â.â.âthat Iâll be at.)

Randy: If it's still available, it may be, but not on the wallâprobably among a stack of other smaller works generally on the table.

Mike: Cool, hope it makes it. Iâd love to see it up close. Have you kept any of your Magic original artworks for you and your family? If so, which ones?

Randy: The only piece that we've kept back personally is "Counsel of the Soratami," which was sort of a turning point piece for me.

Randy: I've had numerous offers to buy it. It's a nice extended-art piece. If it were up to me, I'd sell everything, and if the offer were right, I might part with this one, too. I view my art as a means to living. I'd love to have kept some pieces, but at the same time, I sold them for amounts I felt were fair. I'll probably regret having sold "Dance of the Dead" from my first Magic set, even though I've seen it and sketched on the theme more than any other piece. So okay, maybe I won't regret selling it.

Mike: Ahem, readers, ahem. This is bold as a hint. Ahem. 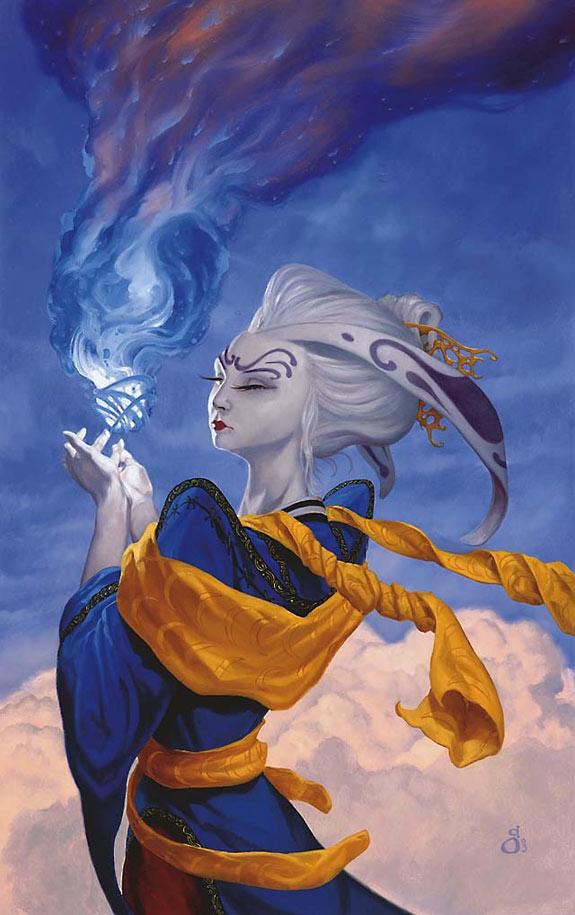 Thanks for checking out the art today. Enjoy the Maze, and weâll find out who wins soonâor who doesnât win.

Hope someone wins because this is America. We like winning.