Love is by far the hardest concept to convey in games.

Itâs among our more complex emotions, and since games often rely on tropes for storytelling, itâs crazy-hard to include. Using love as shorthand for sex is lazy at best, and itâs really damaging at worst.

If used correctly, love can convey romantic love, admiration, a fatherâs failings, a motherâs worry and raw emotion, among other things, that could be directly tied into a game. Magic includes parts but often strays away from deeper love or difficult conceptual cards. Nuance is stupidly difficult to include when working with freelance flavor writers, top-down designers, and freelance artists. Despite the barriers, love is incredibly additive to a magical wizard dueling game. It adds for greater representation of, well, reality, and it allows deeper flavorful cards.

To set the basis, letâs discuss briefly how each color perceives love. The novels show the differentiation using the color pie, but being succinct Iâve found useful.

Black sees love as a means to an end. It is the most realistic color, and as such, it doesnât lie. In doing so, black-aligned individuals manipulate and end up in a lot of divorces. You think you can change the black-aligned person to care or show love? Good luck. Black works out of fear, and it clearly shows. âIf Iâm in a relationship, I wonât be as susceptible to power grabsâsomeone will be watching my back.â Love can stabilize, but only so far as it impacts the self. It also is very much the manipulation of love. Think like Angelina Jolieâs character in Mr. & Mrs. Smith. One only opens himself or herself up to be intimate to extract somethingâ.â.â.âand will probably kill shortly after.

Red sees love as raw instinctive pheromones. Hookups and one-night-stands are redâs business. That naivety of a relationship going sour crushes red, only to be swayed into another one when something is presented. On the flipside, imagine the butterflies of the first few dates of meeting your wife or husbandâexcept your hormones are that of a fourteen-year-old. Itâs a bit wild.

Blue sees love as a path to the American Dream. If you get a wife, youâre almost to the picket fence and that idyllic state like Uncle Rico and his soul mate are. They see the logical help that marriages have to a financial situation, yet dates are impossible considering every restaurant is checked on Yelp and still no action is made. Two very analytical people can study and examine life together.

Green has a complicated relationship with love. Normally, green is very community-based, always being the wingman or wingwoman because the green-aligned individual will find someone eventually. Green-aligned people know that when they finish college, of course they will be married soon and have two kids before age thirty. They believe in first impressions, and on dates, they give up quickly if it isnât working. They prefer group dates but just donât like if their blind dates are trying too hard. Let nature run its course. If meant to be together, itâll happen.

White sees love as the medieval concept of making an alliance and having a duty to one another. Itâs proper courting, and white-aligned people want to meet a personâs entire family before even a date. Courting in high school is more so white, sans the hormones. It might not be all that passionate, but itâs consistent. If you marry at age nineteen, you wonât know what else lies out there. Are they a hundred percent happy? They will never know, and that is white. You know the people on Facebook proclaiming their unique love to one another with hundreds of the same picture? Yup, thatâs white.

There are always flowers on the table, but it can become stale sometimes, despite reading the Men Are from Mars, Women Are from Venus book, expecting their relationships to be altogether similar.

Thanks to my favorite Tumblr for the image.

Knowing these aspects of color pie love and romance, people often ask why there arenât more cards based on love. Usually, they just want sexy images, homages to the morning after, or come-hither glances and such. So, it had to be asked to Doug Beyer, one of the Wizards staff creative writers: 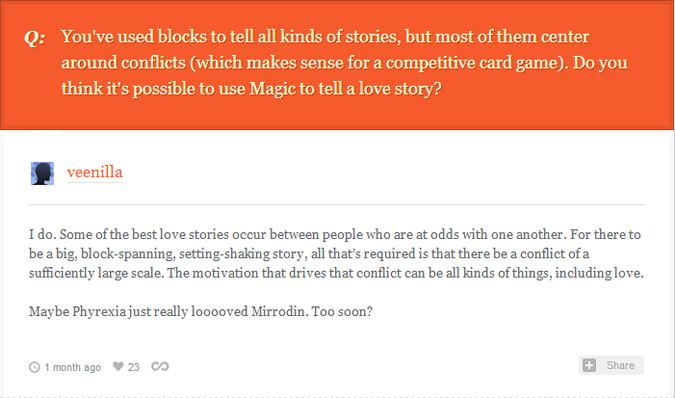 Clearly, Magic design can be done on a full-block scale. The Iliad turned out okay. Only Jace and Liliana had a relationship for planeswalkers in recent times, and even that was brief and rarely mentioned. In the past, of course, planeswalkers procreated and had children. Read Arena; Garth had children, though we arenât sure if his spark was active then.

I would kill to see a block unwind full of emotion and betrayal. Love can urge people to do terrible things. Add mana and destructive capabilities, and every teenage planeswalker would flatten a city because a woman showed no interest, or worse, it was too late. Thinking of a damsel in distress isnât where you mind should take you. Start with tropes, sure, but think of how a G/W planeswalker would be a matchmaker or use magical spells to help with conception. A Doubling Season planeswalker would be a good start. Maybe the planeswalkerâs items help conception like Neolithic fertility totems might. Could he or she planeswalk to a plane without children, where all the males or females are sterileâor worse, where there are no one type of gender, and only visits from planeswalkers allow for new blood to be created. You can eliminate sexy time and steal blood from them or whatever. It could even be elves for age and longevity. A âgodâ would come to create offspring, and the world continues. He or she would then leave. A ton of design space is there for designers to uncover if they wish.

Love opens options, no doubt about it, but one has to be very, very careful with showing the wide gamut of human emotion.

For every lovely and wonderful part of love and our sexual nature, a half-pivot shows the deepest evils of humanity. If youâve seen Requiem for a Dream and were disturbed more by that movie over The Exorcist, you know what I mean. Yes, Magic is a game made for a teenage audience to begin playing, making outright nudity out, keeping us at about a PG-13 level. What moves us to the Râand worseâratings are what you hear on the news. This card summarizes what I mean:

I remember reading this card while working on the set and thinking, âWhat kind of evil acts did he inflict before he killed them?â Chilling. Reading Furor of the Bitten and thinking that the figure was in a brothel changes the entire storytelling. We have a fantasy game, sure, but can Wizards show vampires torturing humans together? It is an activity they do love to do togetherâ.â.â.â

I wouldnât mind a reference tossed over the top, not unlike watching Spongebob as an adult and seeing sexual innuendo. I think more are possible, but Mark Rosewater is a pretty careful guy when making cards.

We have examples of isolated incidents of love, but itâs not stressed, and only surface emotions are touched. Letâs look back at examples of love in the Innistrad block. Iâve selected a few to illustrate:

A father is telling his son or daughter that he will probably die. The line, âYou will be head of household,â is a super-common medieval trope. The taking up of the sword was actually a rite of passage. Swords were stupidly expensive and often nicks and dings in them showed continuity of a family line. Seeing the mortality in Chris Rahnâs work and eliciting very deep emotions is beyond A+ work, itâs incredible storytelling. The flavor text and card name arenât even needed. You just know an aging father is handing things down. (Sure, it could be fealty of service, but with scars on his face, heâd be kneeling for that due to his age.)

Iâm going to group these together. Grieving widows are a concept of older war, of men in uniform coming to your house and you already know the news. War is terrible, and no wife or husband should bear the news, let alone discover it! I wish an image were flipped so it was a man grieving. Women were soldiers on Innistrad; I read the comics. 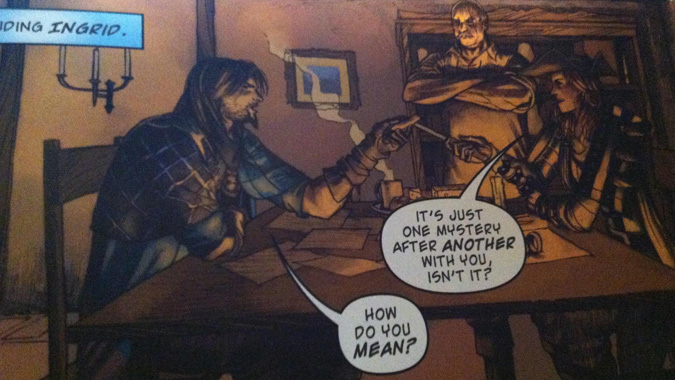 Image via The Spell Thief #3, IDW and Wizards of the Coast

Terese showed family and the importance it has to even the most average of citizens. Does this card break immersion in the set? Sure, it doesnât seem to fit the color schemes or the overall feel, but itâs perfect. It shows exactly whatâs at stake for the humans of Innistrad: their livelihoods, legacy of their ancestors, and humanity itself. Occasionally, weâll see breaks like this, such as with Foglioâs, but theyâre growing rarer.

Iâve noticed most aspects where love can flourish are terrible movies and spells. Very few creatures or lands make this possible. Perhaps with more figures in lands are made, people could be frolicking in the fields. Iâm just spit-balling here.

Letâs do a little contest. Itâs been a while since I did one.

Here are four examples for which I think love couldâve been injected into to make a deeper emotional connection.

In the comments, keep the mechanics the same, but rewrite the card name, a new art description, and a flavor text.

Best submission for each card wins a free booster pack of my choice.

Who will comprise the panel? Well, it will be our own Vorthos team of me, MJ, James, Drew, and IL, being Inkwell Looter.

Yes, other people will be able to see your submissions. More on that later.

Do not believe your work isnât strong, fitting, interesting, and in full fulfillment to your commission. Itâs on point; weâre just trying a little exercise here.