A couple months ago, I wrote about a Golgari Graveyard deck for Standard, taking advantage of cards like Grisly Salvage to fill the graveyard and power up creatures like Nighthowler. As luck would have it, Conley Woods posted an article the same day highlighting a similar deck that he had prepared for a Grand Prix. Born of the Gods has brought us some interesting new tools for the deck, so today, I'll be looking at an updated version of my budget list, taking some advice from Conley's version as well.

This deck doesn't run very many lands, but makes up for it with eight mana-producing creatures and eight ways to pull lands from the library. Elvish Mystic and Manaweft Sliver ensure you have enough mana to cast the 4- and 5-mana spells in the deck. They also give you a better chance of putting creatures in the graveyard with your self-mill spells. Since the deck enjoys dead creatures so much, it's not even a big deal if your opponent kills them.

Manaweft Sliver is by far the last choice for 2-drop mana producer in most decks, losing out to Sylvan Caryatid, Voyaging Satyr, or both. Here, however, I think it's the best choice. There aren't any fancy lands to untap with Voyaging Satyr, and the 1 toughness isn't worth the chance of not being able to produce black mana.

Sylvan Caryatid would then be the obvious choice, but with Nighthowler in the deck, I've found that Manaweft Sliver is often a better card for the job. The ability to bestow a Nighthowler onto Manaweft Sliver and attack has come up numerous times in playtesting, while the Caryatid's 3 toughness was far less relevant. Hexproof would matter more of the Caryatid could attack, but without the ability to make it a giant threat, you rarely care much if your opponent uses removal on it.

Grisly Salvage and Commune with the Gods are the cards that really get this deck going. They fill up the graveyard with creatures while finding the creatures that can take advantage of that graveyard. The deck has a relatively low threat count, but these two cards ensure that you're rarely left without a big creature to attack with.

Drown in Filth is a removal spell that can also stock up your graveyard with creatures. Although it takes a bit of effort to get it working, the upgrade to twelve other self-mill cards in the deck should make killing small creatures a breeze.

Satyr Wayfinder is a perfect card for this deck, and I'm excited to play with it once Born of the Gods is released. I never much liked Lotleth Troll here. It's an excellent target for bestow, with trample and regeneration making it very hard to deal with. However, without bestow, it becomes a rather low-impact card that rarely does much of anything. Satyr Wayfinder is a card I would much rather see on turn two. It dumps more cards in your graveyard, fixes your mana, and doesn't dilute the creature count. Despite the fact that it only grabs one land, I'd take this over Mulch any day. 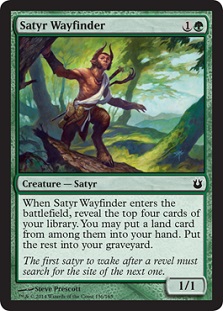 Whereas Satyr Wayfinder takes over the 2-drop slot left my Lotleth Troll, Scourge of Skola Vale takes over some of the function. It has trample, making it a great target for Nighthowler's bestow, and although it doesn't regenerate, it can still blank removal spells. Rather than protecting itself, however, it protects your other creatures. If your opponent tries to kill your Nemesis of Mortals, you can sacrifice it to the Scourge and still have the same amount of power on the board, this time all on a trampling creature.

Nemesis of Mortals is one of the primary reasons this deck works. Most draws should allow you to cast the Nemesis by turn four at the latest, with monstrosity following a few turns later. It gives you a very large early-game threat, and its size isn't completely dependent on your graveyard. That fact is often very important when your mill spells don't hit enough creatures to really get things rolling early.

Jarad, Golgari Lich Lord becomes a very large threat as the game goes on, but the ability to sacrifice creatures is where he really shines. If your opponent clogs up the board with creatures, you can sacrifice your creatures to attacks his life total directly. It also helps against control, where a creature that might not be powerful enough to deal lethal damage in one attack can be sacrificed to finish the job.

Shadowborn Demon is the primary removal spell in the deck. It kills almost any creature, although it is stopped by the unfortunately-typed Desecration Demon and the protected Blood Baron of Vizkopa. It also happens to attack for 5 flying damage each turn, and although its sacrifice ability is supposed to be a drawback, it will often allow you to sacrifice no-longer-needed, mana-producing creatures to help fill your graveyard.

Nighthowler can be disappointing at the start of the game, as you'll sometimes have a few turns of only one or two creatures in the graveyard. Fortunately, it becomes increasingly threatening as the game goes on. Although it may look like a 3-mana creature, you'll rarely want to be casting Nighthowler for its regular cost.

By using bestow on even a small creature such as Elvish Mystic, you can attack right away rather than wait a turn. If your opponent kills the Mystic, you're left with a new creature that's the same size as the old one. This is a great way to leave a threat behind after a Supreme Verdict, and the card has some other very interesting applications. 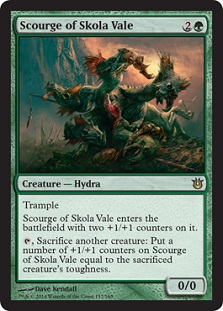 The combo I've already been having fun with is with Jarad, Golgari Lich Lord. With a 9/9 Nighthowler enchanting an Elvish Mystic, you can sacrifice the Mystic to make your opponent lose 10 life and then sacrifice the now-10/10 Nighthowler for the kill. It may seem a bit farfetched, but I've done it more than once in my matches with the deck.

Scourge of Skola Vale presents an opportunity for similar shenanigans. Picture this: You have Elvish Mystic and Scourge of Skola Vale on the battlefield, along with five creatures in the graveyard. You can bestow Nighthowler onto the Mystic and attack for 6 and then sacrifice the Mystic to the Scourge at the end of your opponentâs turn. Nighthowler becomes a creature, and you suddenly have 14 power to attack with and kill your opponent.

It's also worth noting that Grisly Salvage, Commune with the Gods, and Satyr Wayfinder all use the word may. This means that you can choose not to put anything in your hand and simply use it as a Tome Scour. Although this isn't what you want to be doing most of the time, it can help put that one extra creature you need in the graveyard to deal lethal damageâor to make sure you have enough lands to kill your target with Drown in Filth.

A big part of the strategy of this deck comes in before you even start the game. The most important thing you need to have in your opening hand is a self-mill card. Multiples are even better. Don't be afraid to mulligan a hand with lands and creatures if you don't have the mill to make those creatures matter. It's far easier to win off a good five-card hand in this deck than it is to win with a seven that can't fill the graveyard.

I'm excited to see how the format changes with the introduction of Born of the Gods, and I think this deck could be a real contender thanks to these new tools. If you're looking for a powerful deck that's very different than the usual Standard fare, give this one a try.