This week, Iâd like to cover three things about Dragons: 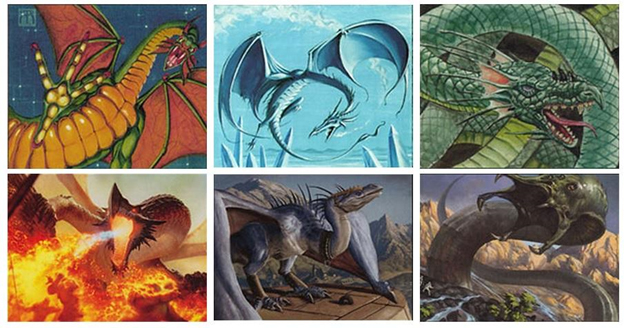 Magic has three variations of giant creature that eats your tiny village. They also destroy them for fun when their weekly dragon bingo league is on hiatus. Ant and I covered a little bit of this in our Snack Time podcast last week, which is well worth a listen, but I want to bring in a reference from Wizards of the Coast.

Our boy Doug Beyer wrote this Savor the Flavor column way back in 2007 to explain to us a little more in âDrakes and Dragons, Wurms and Worms.â

Head shape, wing shape, body shape, scale colors, breath weapons, spell knowledge, ageâall these characteristics vary from plane to plane and from dragon to dragon. A dragon engine is completely different from a furnace dragon of Mirrodin, despite them both being related to artifacts. An Otarian eternal dragon is totally distinct from a Kamigawan spirit-dragon, despite sharing a second creature type. Some dragons have bare indications of wings, backed by jet turbines. Others have enormous earlike wing structures jutting from their massive heads. Others have crystalline ice structures integrated into their scales and glacial winds frozen into their hearts.

Wurms aren't just flightless and limblessâthey're also usually green-aligned: forest dwellers. Or it might be more accurate to say that the forest tries its best to dwell around a wurm. Wurms are preternaturally hungry and relentless when pursuing their preyâlet's just say they don't ponder the effects of deforestation as they crash through the trees after their foodâ.â.â.âWurms from different planes can have vastly different morphologies, especially in their head and jaw anatomies. Truly, the essence of a wurm is its mouth.

A drake is like a dragon, but has no front legs, only wings and back legsâ.â.â.âA drake is, once again, different in kind from a wurm. A drake is generally blue-aligned, about the intelligence of a dog, and a common servant to mages. Drakes have dragonlike heads, long reptilian tails, and scaly wings, but also have back legs, somewhat like a bird's.

Basically, dragons are all colors, with white and black dragons, depicted below, being a lot more rare to. Red Dragons are the natural fit as iconic, big creatures, compared to Hydras in green, Demons in black, Angels in white, and Sphinxes in blue, according to Mark Rosewater. It could be Drakes or Wurms, but they just didnât stick. Everyone likes dragons, but thematic fit is key. 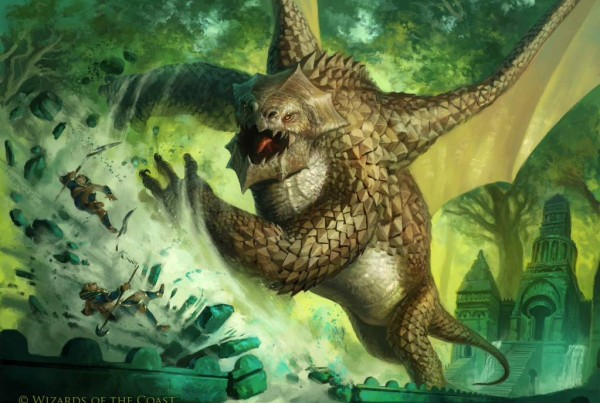 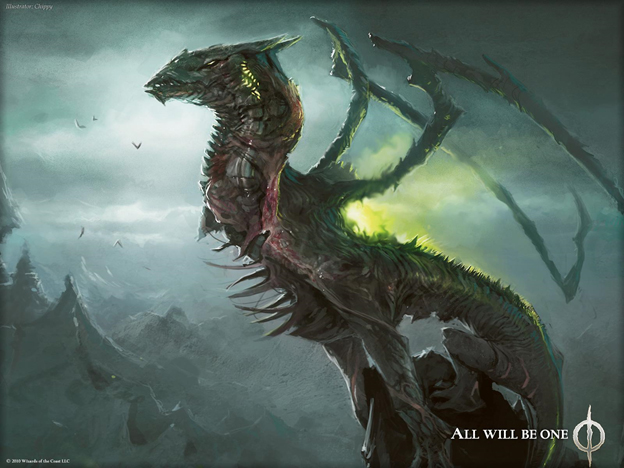 So, there seems to be a subtype of dragons: hellkites. Thereâve been a few of them, and unlike hatchlings, which makes sense as smaller dragons, hellkites arenât really defined. Are they, like, bigger or meaner dragons? Letâs ask Marshawn: 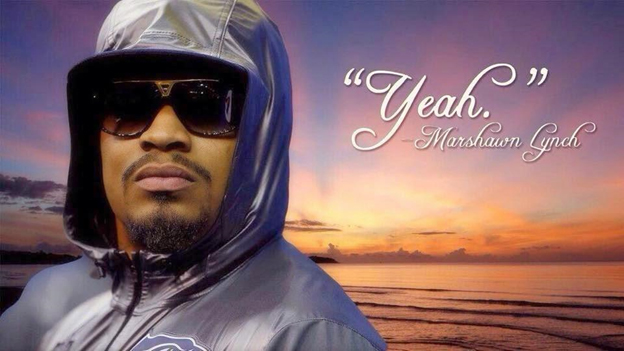 Q: Are there any design qualities that are used to distinguish the "Hellkite" dragons from the regular dragons?
âAJ, Lynchburg, VA

âHellkiteâ is simply a word we use for really powerful, really angry dragons, A.J. There's no hard rule for what qualifies a dragon to be a hellkite, although so far all of them are either 6/6 or cost 7 mana or more to play.

We even have baby ones now. Such cute. I hope someone makes a baby cosplay of one soon. Someone shake a fist at Etsy. 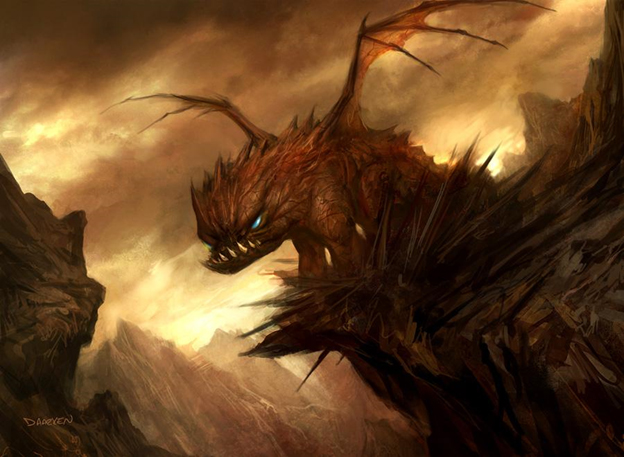 As the Vorthos art guy here at Gathering Magic, I feel that while art reviews and setsâ big-picture analyses are fun, there often isnât time to step back and examine a piece of Vorthos design or rules in art and the like. So, today, weâll have a little lesson in anatomy for dragons as our next step is chock full of them.

Most dragons in the fantasy world are based on bats. In Magic, most drakes are more birdlike in flying and movement, but regardless, bats are generally the basis. If I were starting out as an artist, Iâd definitely buy a bat skeleton to see how bones came together and learn to manipulate them.

I researched into DeviantArt and refound Sammy Torres, who does a wonderful job of showing just how dragons come to be. Iâve edited out a bunch of extraneous information, but you can dive in more on her DeviantArt profile.

Below, Sammy created comparables of a dinosaur, a bird, a bat (a dragon for this purpose), and a human. 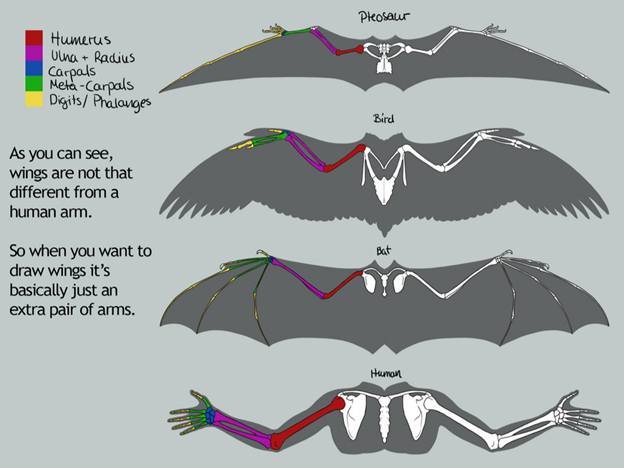 Notice especially how the human hand bone corresponds to the bat. I grabbed another image to show how most dragon wings are like normal human arms, with âfingersâ being fully part of the wings. 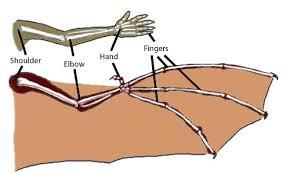 And more on that note of human fingers integrated into the wing of a dragon: They arenât flappy kite wings without much flexibility. Dragon wings in Magic are more akin to giant, webbed hands: 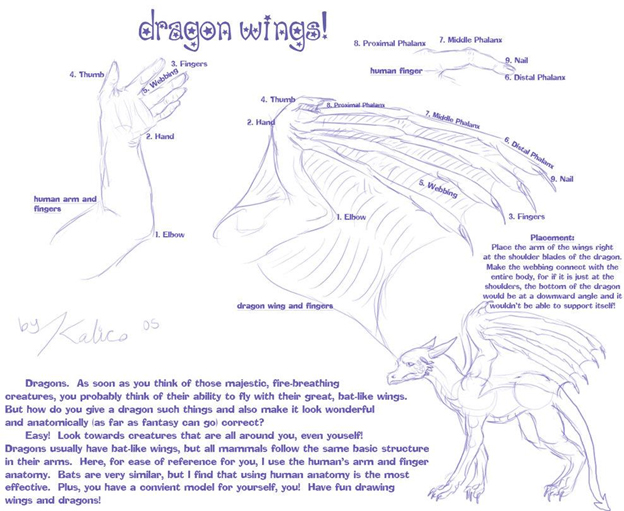 Overlaying a dragonâs bone structure on a wing is below. 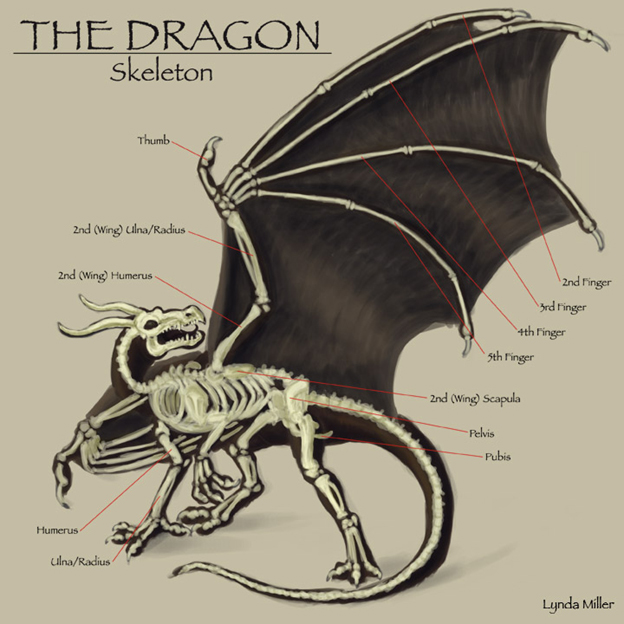 Now, those âfingersâ arenât always bones, as evidenced in Moonveil Dragon by Todd Lockwood. Itâs a stylistic and artistic choice, but you can understand the gist of anatomical necessity to see âwhyâ they work. 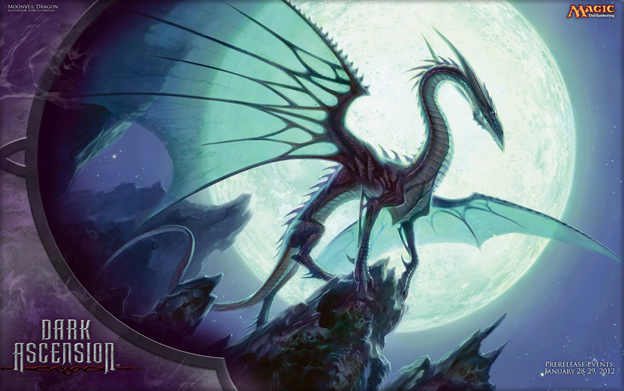 However, Magic sometimes does show bones or, well, semblances of bones: 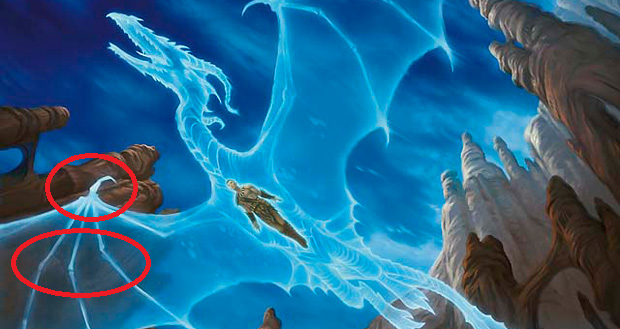 To see where wings attach onto a body, I grabbed a mini-screenshot of one of Sammyâs tutorials. You canât just put the wings popping out of anywhere. You can see the wide variety in bone structures from being in front of the arm, behind the arm, utterly separate from the arm, or intertwined within:

This is all rather in depth on where bones connect, and not every artist cares, but when youâre receiving a Dragon commission from Wizards, you need to know musculature. Bone structure informs it, but if youâre shaky on it, you can use human anatomy and iterate on it. I grabbed this tutorial to show how muscles differ in dragons in three muscle areas: deltoids, trapezii, and supraspinatus. Itâs all about range of motion to provide for thrust.

To see it on a dragon, I grabbed another two to show how large the chest muscles and oversizedâin comparison to humansâmuscles in their shoulder need to be. 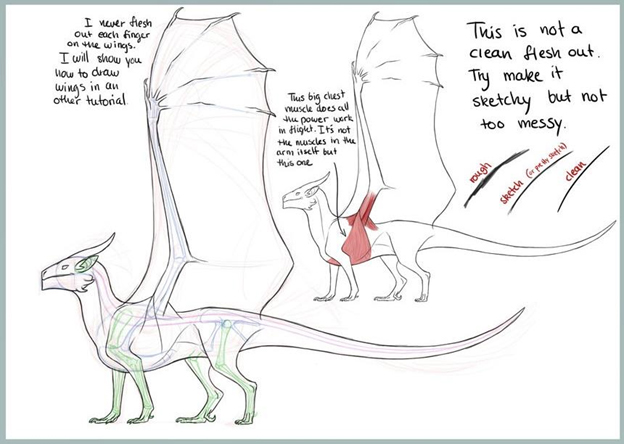 You can see the musculature in action below in the shoulder muscle. A tiny muscle by our collarbone needs to be greatly enlarged to provide the necessarily downward motion to pull and push wings with aid of the pectoral muscles. The wings arenât really that âstrongââitâs the dragonâs core and shoulder muscles that do the work.

Iâll grab a dragon from Dungeons & Dragon to show how it looks without any background. Lars Grant-West, Magic artist, worked in a zoo and loves him some reference; notice how the wing comes together behind the shoulder, closer to the center of the back, with a muscle connecting wing thrust to the triceps. That makes for some powerful down thrust! Also, he has fingernails on the edges of the wings. Fun! 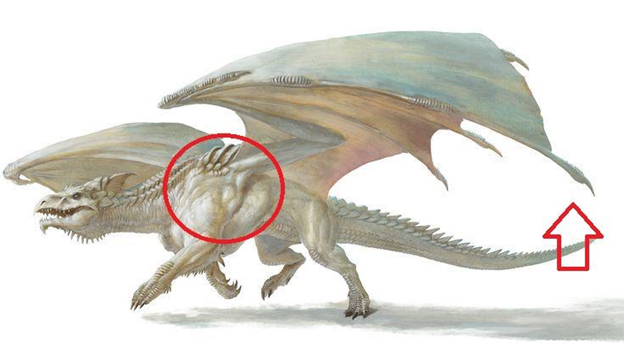 I had a full section on this, but for brevityâs sake, Iâll save that for the art review coming out the Wednesday after the prerelease. In short, thereâs a lot going on in the Tarkir block, especially in Dragons of Tarkir. Iâll leave you with one thing. Ever see a pangolin? 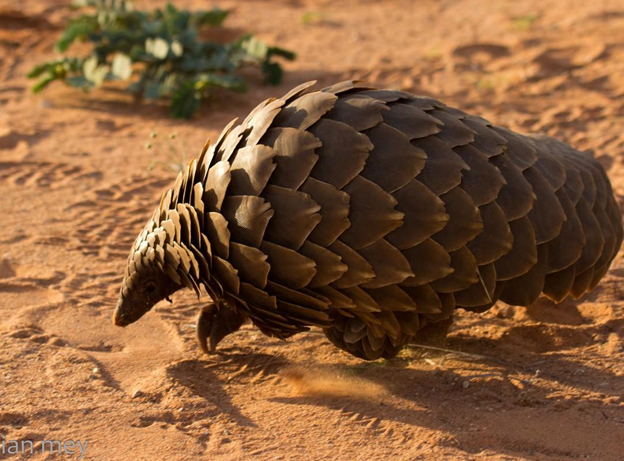 I thought I saw one, too. Or is it something else entirely? Weâll talk about that again soon. 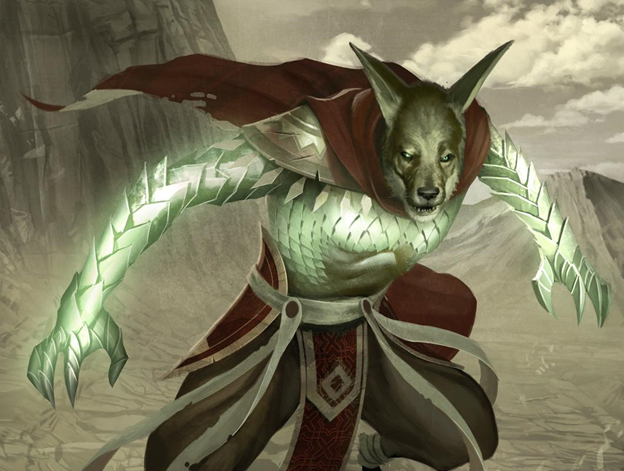 There arenât really any art guidelines or distinguishing solid rules on what dragons can be doing in Magic. Most of them just smash things, sure, but some contemplate or manipulate things in their tiny art boxes. Iâve noticed a complexity difference compared to a musculature or bone-structure deviation.

For example, hellkites allow for âmeanerâ things to happen in battle, as explained above, but they donât really look any different.

The best exampleâwithout access to voluminous style guides or doing the Progress Engine's live vivisections of Wizards art directorsâis that the more complex a dragon with abilities, the smarter the dragon is. There is also a graph of hand movement, showing personality to tinker and manipulate objects to intelligence and being unique among similar dragons.

You go and check your dragons. How many use their hands and therefore are âsmarterâ with more abilities? This is a preview to discussing Elder Dragonsâ.â.â.â 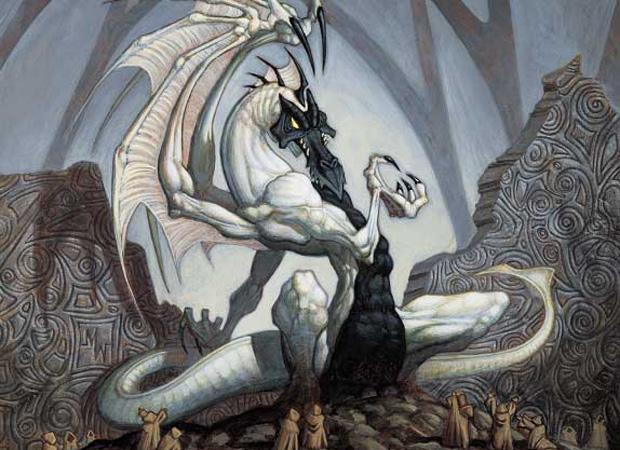 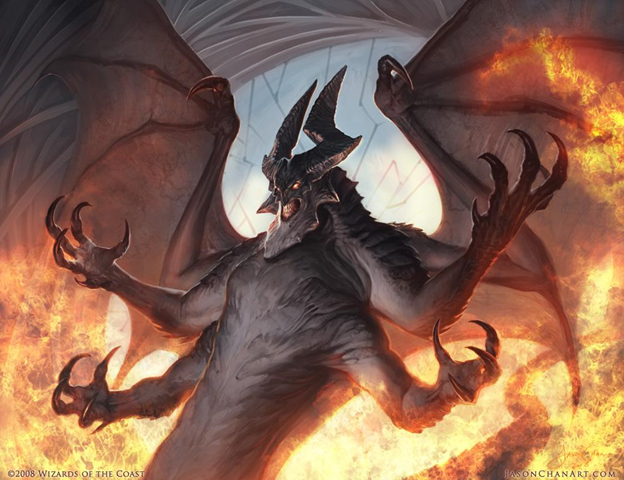 Speaking of Elder Dragons, my fellow Vorthos Ant Tessitore mentioned the Planeswalker war last week. He was referencing the old Magic comics line and the stories that revolved around the Elder Dragons. They had a giant war, and only Nicol Bolas was left standing, igniting his spark in the process.

So, see the image below? Yeah, that sort of thing has happened before. 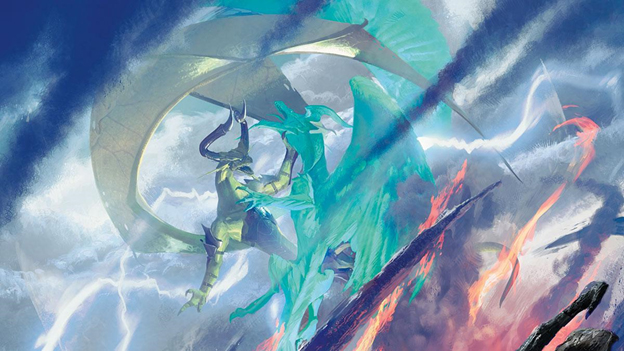 In the Elder Dragon set of two comics made in 1995, the story explains how Chromium wasâ.â.â.âwell, read the comicsâtheyâre pretty decent for being made two years after Magic originated.

As for the reference, Chromium fought Piru, who was said to be an Elder Dragon, but also not: a lesser dragon. A thing about old, âpre-revisionistâ canon is that facts blurred pretty quickly, as noncard content was a wild west for decision-making. Thatâs high-level Vorthos talk in whatâs ârealâ or canon and whatâs fluff or ghost canon. A forum, No Goblins Allowed, has a ton of old-school Vorthoses who have been interested in flavor and art for decades. Theyâre generally friendly to outsiders. 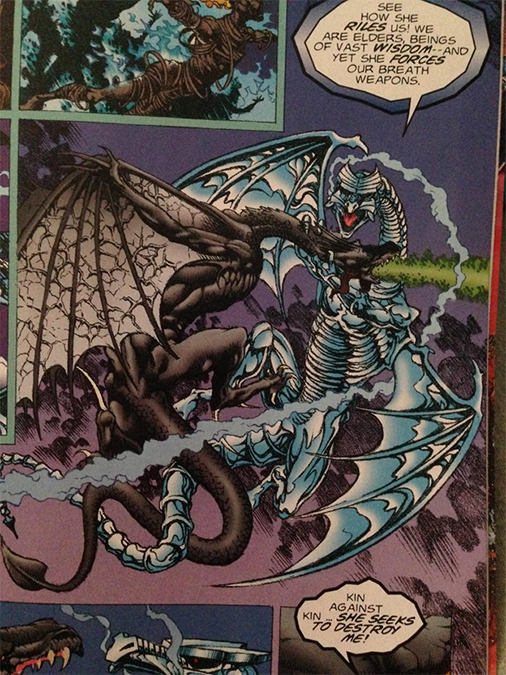 Later on, Chromium fights Palladia-Mors. Itâs unclear if Chromium actually killed Palladia-Mors, but it doesnât really matter in the end, as Nicol Bolas killed all Elder Dragons anyway. To gain a little better view on that whole story, check out the novel Test of Metal. 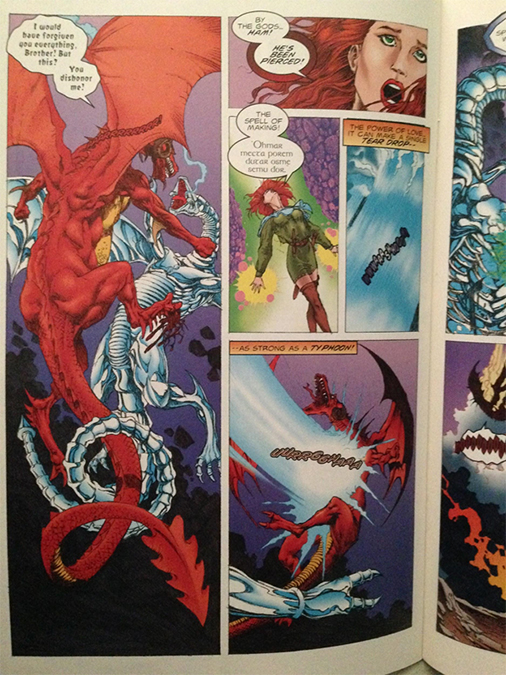 The Dragons are coming. I canât wait. If you notice something visually odd about a Dragon, such as white Dragons having a look and feel compared to just randomized depictions, there are reasons youâre piecing these things together. Khans of Tarkir is the first block to weave in Dragons directly into card designs, colors, and storyline. Itâs a test into these spacesâafter successful efforts with Phyrexians using all five colors with ease.

Our colors are starting to separate from one another, and visually, the cues, the ramifications are now moving from concept to effect. Weâre seeing glimpses of the future of Magic through the lens of Dragon depictions, and I canât wait to see more.