Today, Iâm going to write about what it means to be Will Murai, an artist seemingly asked to remake player-favored cards again and again. He is often asked to remake an iconic artwork from Magic, and no one seems to mind. What makes an artwork iconic is a movable target, with high playability mattering in Magic. Iconic art isnât necessary happy or deeply emotional work, itâs a reaction players have to a card they play that brings them an advantage and thus, joy.

I am asked by art collectors from time to time, âIs this painting iconic?â as if something being an icon makes it more worth buying or more valuable to have on your wall. I never know how to answer other than subjectively from my own lens. I think if you and four of your friends instantly recognize something and can speak about what it is, especially in a game with thousands and thousands of cards, it is absolutely an icon. Todayâs card Iâm previewing attempts to reimagine an icon.

We need to look no further than Brainstorm and Vendilion Clique to see Willâs work and nod that he completed the task and that he didnât âmess upâ the art. Weâre in good hands here.

Not every artist is up to that challenge: reading an homage art description and making a familiar image new. I grabbed a few minutes of Willâs time, and we talked about making his artwork and my preview card, Macabre Waltz.

If there is a truly iconic artwork that does not have the appeal across every format and yet has art most players know, itâs the Waltz. I grabbed a handful of results of lists that writers have made of the top ten coolest, scariest, spookiest, and more pieces to find Jim Murrayâs iconic work always listed at places like iO9, The Mary Sue, Star City Games, and on YouTube again, again, and again. Will Muraiâs job was to take an incredibly memorable artwork and leave his mark on a new image that we can hope lives up to the standard Murray set. 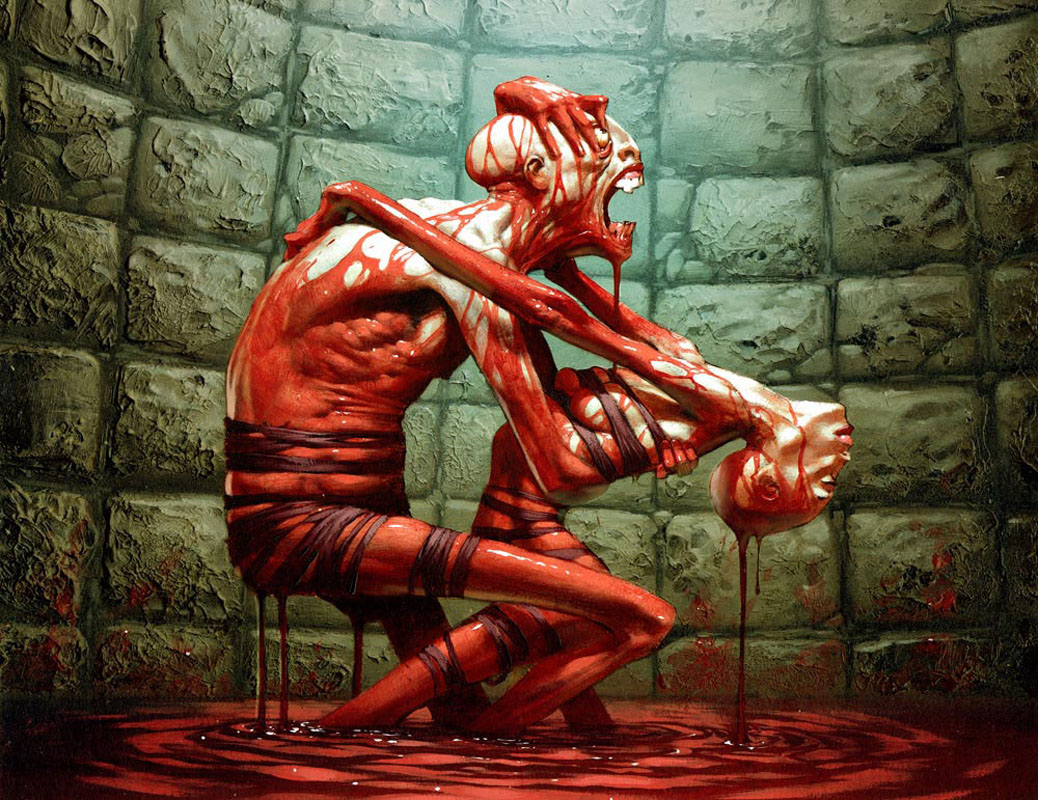 Without further yapping, letâs hear from Will.

Mike: Do you remember the first thing you thought of after reading the art description?

Will: I remember being very excited about it. The description was amazingly written, with the right amount of keywords that sparked tons of imagery in my head, such as "balletic and horrifying at the same time." So, after that, I started to research, like I usually do. 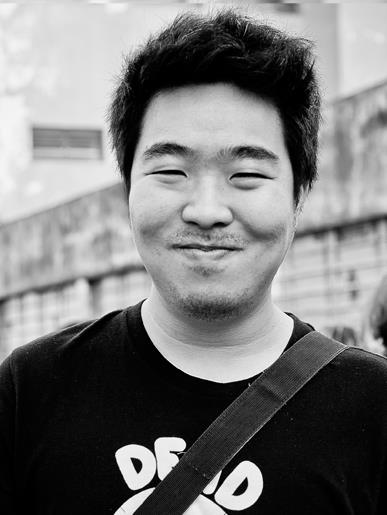 Action: The Planeswalker LILIANA VESS is a powerful necromancer with a grim sense of humor. Show her WALZTING with a male zombie minion. Liliana takes the traditionally male role in the waltz, theatrically dipping the zombie in her arm. The zombie artfully lays back in a parody of a romantic "fainting maiden" pose (it's a mindless undead monster, though, so its motion is accidental), and one rotting arm almost caresses Liliana's face. Liliana smiles darkly.

Focus: Liliana and her zombie minion-slash-dance-partner.

Mood: Graceful, balletic, yet horrifying at the same time.

What kind of research did you do this time?

Watching videos of "the basics of waltz" and Fred Astaire old moviesâsome imageries of Fred and Adele Astaire dancing were crucial to ignite some sketches, mostly on the "fainting lady scene," but not only that. I watched a lot of videos showing the basics of waltz. I wanted the arms, hands, and poses to be as accurate as the composition allowed it to be.

Totally understandable. Sheâs the lead dancer, traditionally the manâs role, and sheâs comically referenced as such in the flavor text. Letâs talk the graveyard itself, I see the angel and tombstones. Did you have reference for that?

The graveyard itself came from world guide. The angel is a metaphor; âsheâ is playing the music. The angels are playing instruments, so there is more to the functionality thing. I try to put elements that will increase the storytelling. After filling my head with a couple of waltz rules and a lot of images, I sketched this very loose, to get the idea.

I chose the bottom version because it has a very clear silhouette of the "fainting lady" move.

That back though! Cosplayers would kill for that type of reference. The art director must have seen something in it to urge you to see a refined sketch. Itâs quite lovely. 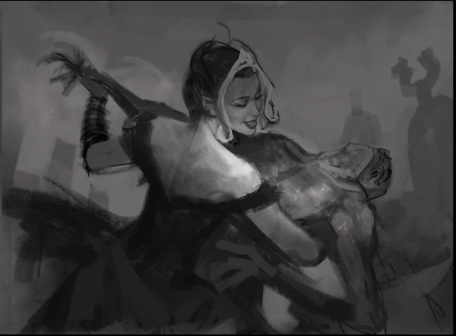 Yeah, yeah, I know. I'd love to paint that, but I always have image functionality as primary goal, so I chose that one!

Not even Rebecca Guay painted backs of women in Magic; itâs a level of softness that Magic doesnât quite have. It kind of takes away from the aggressive nature of warfare and attacking your opponent. Itâs a quiet scene, and having someone disrobed enough to show it would need angels or a quiet, contemplative scene. Itâs not impossible, and surely weâll eventually see a Planeswalker from the back for references.

Jim Murray is also one of my heroes.

How so? What draws you to his work?

He stylizes without losing the realistic render. He distorts the anatomy of the characters to achieve a very personal stylization. So I used to see the mechanics, but the inspiration was only a big motivation knowing that I'd be reinterpreting something Jim painted beautifully.

Like Vendilion Clique. You need to keep theâ.â.â.âhomage, but make it your own. Reimagining Brainstorm, Vendilion Clique, Divination, and Negate, you have to balance and judge by the case, you know? It is a challenge to know whether you completely start from scratch or pay a lot of homage.

Was there anything easy or difficult in making this?

This was extremely fun from beginning to end. The challenges were there, but I think I was so excited that I didn't even realize that. Of course, like in Vendilion Clique, I try not to think that there are already a ton of fans of that card and expectation. I just do my best. 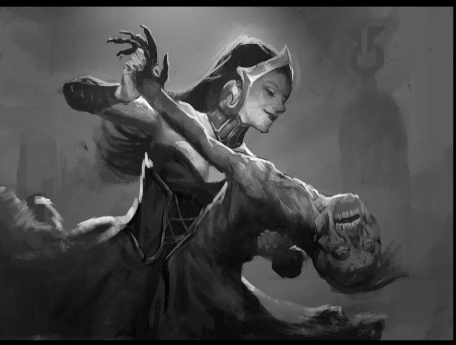 And best you gave us. For people reading thisâand it will be read by many, many peopleâis there anything you can comment on about Liliana in making this?

Liliana is one of the most popular Planeswalker without a doubt, right? So there is a pressure to paint her beautifully and capture her essence, like this mixture of bizarre and beauty. That smirk that shows she is enjoying it. 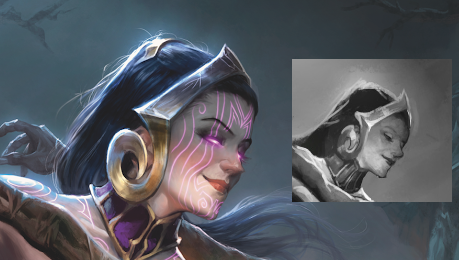 Thank you, Will. Itâs a lovely artwork. I think players will love seeing this reprint card with new artwork. They always love seeing their favorite Planeswalkers showcasing their personality on other cards.

As for the art itself, I want to point out a few things you should note as you play Macabre Waltz in your Draft pool, making the madness mechanic go live. 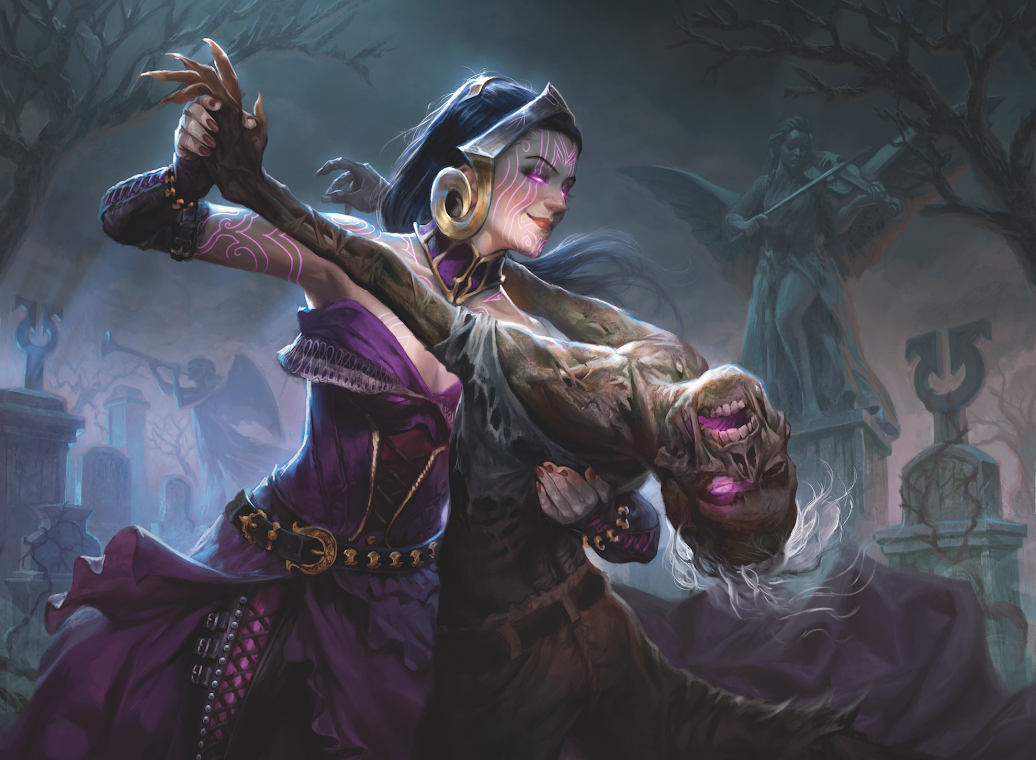 Macabre Waltz by Will Murai

Original sketches available for purchase from Will directly.

I hope you enjoy this art. Itâs utterly lovely, itâs resonant with the character, and itâs a perfectly on-theme reprint for Shadows over Innistrad. A huge thanks to Wizards of the Coast for allowing me to preview this card and for giving me an opportunity to talk art with Will Murai. You can find Will on: