I love it because of the fear.

There is something magical about teaching someone new to Modern how explosive the Infect deck can be. Hitting for 4 infect damage is a casual occurrence, while hitting for an unblockable 10 damage to an opponent normally is absurd. You learn once and then prepare for âthatâ player in your local metagame. You donât forget that player.

I find Infect to be like my winter workouts at the gym. When you pick teams, rarely does the kid who wears the old sweatshirt before the pickup basketball game and has actually sweat through it hundreds of times with the worn shoes get picked early. That kid is the best player on the court, but he lets his game show you that. Infect is that kid. You canât know until you actually play against it.

Iâve written about Infect twice beforeâitâs my deck of choice. I scaled it to Legacy and Vintage with one deck with minor changes in âOne Deck, Three Formats,â and Iâve written on the R/G version in âR/G Infect: The Little Engine That Couldn't.â Itâs pretty self-explanatory how that experiment went.

Today, after looking at Brad Nelsonâs twentieth-place list from Grand Prix Pittsburgh, I realized Infect can be planned around with some silver bullets, but it really struggles with new opponents itself! Just race faster is the easy advice to play the deck, but could that be better with some option-driven cards and more sideboard options?

When joining a Modern night at your local shop, how can you prepare for the metagame?

To answer that, letâs look at Brad Nelsonâs list first.

This was good for twentieth place, loaded with an incredibly tight sideboard and catered to the event. Are those two Serum Visions in there? In an Infect deck!?

I see what he did there: to effectively cycle cards to dig deeper. Seven cards exist to simply get down deeper into pump spells, powering up the two Become Immense. That is the answer to main-decked Spellskite in Twisted Image and also guaranteeing three spells by turn four to power up the kill. I dig the idea, but I donât quite get the Necropede or the Relic of Progenitus. Why one or two? Thatâs an analysis of unfavorable matchups, like anything with Blood Moon. 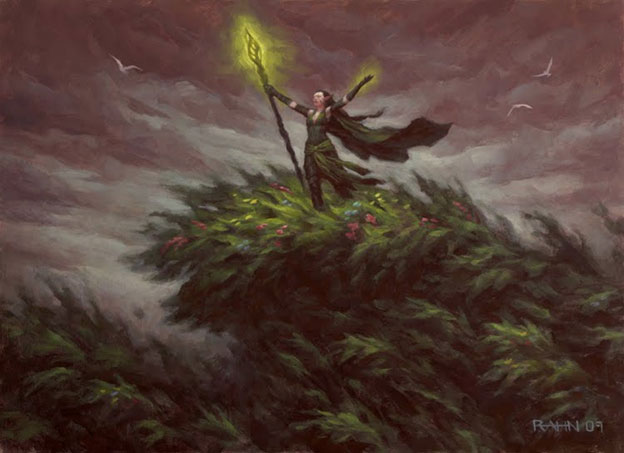 I looked closer at the event and was shocked to see Cuneoâs Infect cut a mainstay of the deck, Groundswell, for unblockability in Distortion Strike and a full boat of Become Immense.

This is a slower version, but it has a bit more stability at first glance, allowing for Become Immense to add to the fear that this deck employs every turn. 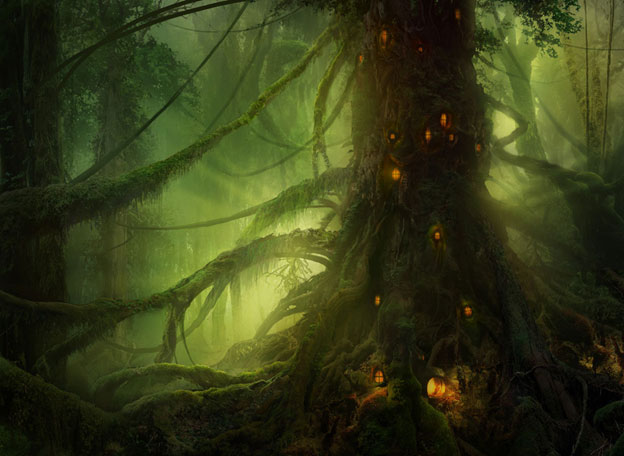 I just find that my local metagame in Minneapolis steamrolls the Infect decks with Wild Defiance shells. The variance is enormous, and since I tried a deck with only two Wild Defiance, I could never get enough practice in.

Iâve also found I just donât play my Infect deck enough. Making it âbaseâ or a known archetype means opponents have answers to everything, and those answers are Blood Moon with a side of Blood Moon.

So, after seeing the tightness of decks by these two finishes, itâs time for me to retool for my event, which is a weekly Modern tournament considering of fewer than twenty players in a South Minneapolis neighborhood. I have no idea what people are playing, but red is cheap, so to prepare for a wide range of archetypes, Iâll need some varying modes. I needed to test Charms.

I looked at Tom Ross and the various other Infect writers, and I couldnât find much written on them. Considering my predicament in not understanding a metagame, what better way to really scare the hell out of my opponents than a scary-plus-unpredictable instant?

I playtested a bunchâIâll cover each one.

I killed a Noble Hierarch, a Grim Lavamancer, a Deceiver Exarch, or some random hate bear ninety-nine percent of the time I cast this card. Come turn three, killing a creature with green mana up was pretty gross. I only used the third option to power up a Become Immense once, and it wasnât enough to kill my opponent. This is unplayable in any forms of Infect unless some sorcery becomes impossible for Infect to deal with.

Summary: Not playable yet.

I found two copies of this to actually be better than expected in a mono-green Infect deck, as it refills your hand and gives your creature some evasion. Itâs not good, but it could be in there for a budget Infect green deck or perhaps Pauper Infect.

Summary: Worth testing in a mono-green Infect deck.

This card is quite good with any B/G/U list. If Jund is a problem in your area or, God forbid, Bloodbraid Elf is reprinted, this card will be hugely useful. I found this to sit in my hand a while the first few games I played with it. Once I realized itâs really a 1-damage kill spell to Noble Hierarchs or Birds of Paradise, I won games so much easier.

This card is surprisingly good. It regenerates each creature you control. Iâve been blown out by Pyroclasm before, and this just nullifies it and Electrolyze. I didnât test against any token decksâthe folks I know donât have W/B tokensâbut I could see it getting some play in the sideboard for that. The biggest usage I found for this Charm was, of course, blowing up enchantments. Blood Moon, Splinter Twin, and any prison deck will love playing against this card. I blew up so many Blood Moon cards. People really thought I had Abrupt Decays, so they assumed whatever card I had was uncounterable.

I tried Funeral Charm first, and in doing so, I was made to believe this card could see play considering how many Noble Hierarchs I killed, but the first strike is just worthless. I did have a play that tapped down a âGoyf for a quick win, but itâs underwhelming at best.

See Funeral Charm, and add islandwalkâwhich is valid against half the decks I played against. In playing against anything with Snapcaster Mage, like a Splinter Twin shell, after that Lightning Bolt was cast, leaving up a blocker meant nothing. I gave my second infect creature islandwalk, and I went on my merry wayâor I could kill his 2/1.

Summary: Very much playable in G/U or B/G/U or U/B Infect.

At first look, this card does everything I want in an Infect card. It pumps, it protects, and it removes threats. The problem is that, to play this, Iâm not playing better pump spells. This card is a trap. Every time I looked to my sideboard, this was the first card to go. It gave me exactly what I was testing for: options. The problem is that options donât win games, they prevent you from losing games. If youâre behind, you already made a mistake with Infect decks. Donât add safety valves, add ways to win.

This card was hard to evaluate. Itâs slow, and it wonât remove a Blood Moon because you wonât have 3 mana available to cast it the turn it comes into play. Iâm not sure of a time Iâll want to kill a creature later in a game with an Infect deck. I could see a midrange Infect deck being a thing, but I donât see that in the metagame yet.

Summary: Utterly unplayable as of now.

After the testing, this is where I ended up.

These are the basic lands I chose because I own the original art to the first two. Iâm still working on acquiring the Island painting. 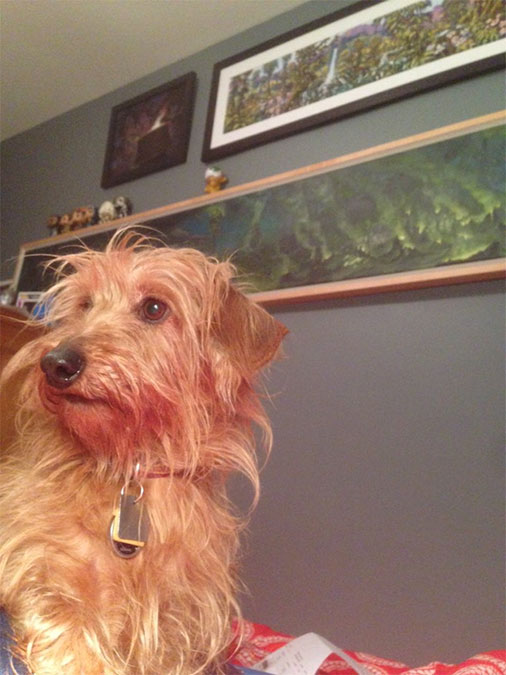 Infect basic land art with Phillip Jenkins, as is standard

Odd options include the B/G/U Infect sideboard, as my local metagame is overrun with Burn and red variants. Phyrexian Crusader is just a house against those decks, and bringing in Urborg, Tomb of Yawgmoth allows my fetch landsâwhich would be dead drawsâto just tap for black mana, thus gaining for me value in longer games when needed.

I see a lot of groups of nine fetch lands and five things to fetch in many Infect lists. In a three-colored deck, I relaxed it a little to accommodate for my very real fear against Blood Moon decks locally. I have the fetches, but I just think they have a diminishing return in how Iâve seen them used. Grabbing a Swamp makes people think you have Abrupt Decayâevery single time. It feels great to invoke fear with fetch!

Due to Blood Moon, Ichorclaw Myr gives me a free threat, and against anything with red, thatâs a 3/3 infect creature the opponent has to legitimately use a burn spell on because his or her little durdley creatures canât block it and live.

And why are there the three basic lands? Iâve found hitting myself for 6 damage to be often the final 2 to kill me. Fetching for a shock land is play one, and then a basic seemed to work the same in terms of mana base.

I love Spellskite and Dryad Arbor in the main deck. I found zero instances in which playing them was negative in Game 1. By the time a Pyroclasm hit, I hadnât fetched for the land yet anyway. It seemed to be about turn four when I need either of these cards, while Pyroclasm often hit more often on turn two or three. Results may vary, but I feel theyâre kosher as singletons to include in the main deck.

Playing black, I leave out any card discardingâsuch as Inquisition of Kozilek or Thoughtseizeâas Gitaxian Probe tells me the same information and replaces itself with a more relevant pump spell, like Become Immense. I tried Plague Stinger, but the black is a splash, and Ichorclaw Myr was needed way more than Plague Stinger. Iâm not wholly convinced Plague Stinger wouldnât be better in a larger tournament, but Iâll keep testing. Surgical Extraction felt similar, as pulling one Path to Exile allowed me to see the entire deck post-âboard, which, as a two-of in the sideboard, was quite good, but it allowed me to, again, not lose. I prefer winning to not losing.

Thanks for readingâmay all the blessings be with you. 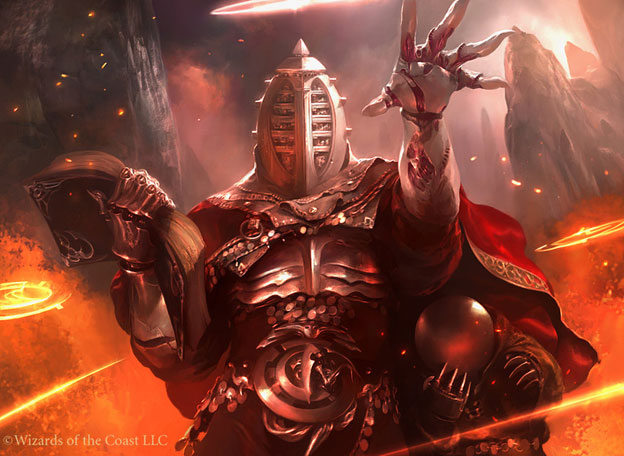