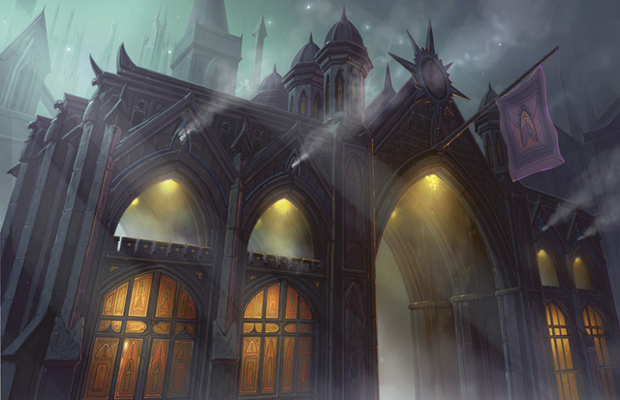 Climbing the winding stair, you stop to catch your breath. Too many cups of coffee and not enough solids for your morning meal mean thereâs now a turmoil in your lower intestine. Plus, your heart is fluttering. Youâve been waiting for this meeting for over eight months, personally causing no fewer than four owls to be sent to rehab for exhaustion by sending florid letter after florid letter and supplication after supplication to the same address. To no avail. Youâve waited up countless nights, staring at the wasted moon above Ravnicaâs angular skyline. Youâre a nobody, a simple hustler, a member of the much-maligned press in this great city. Just last night, you lay awake in your bed, insomnia running rampant as usual, and imagined her opening the latest of your literary appeals.

âReally?â she would say, pale fingers ripping the envelope to shreds, disregarding the wax seal youâd painstakingly done so perfectly. âAnother letter from that simpleton? Please, spare me,â and in your mindâs eye, she tossed the lovingly-penned words into the fire. Or into her rabid pet ferretâs cage, where it promptly evacuated its bowels on your greeting:

âHonored Grand Envoy Teysa Karlov, Lord of House Karlov, Lady of Shadows and Light and Foremost of the Godless Shrineâ.â.â.ââ

But now, now sheâs agreed to see you. The excitement threatens to make you faint, right there on the gleaming marble staircase of the Karlov mansion. You steady yourself, gripping the golden bannister with white knuckles. Swallowing bile, you force your feet to move one in front of the other, until you reach the upper landing.

Whispers and the feathery, noctambulistic caresses of passing ghosts accompany you. Their lullaby echoes sedate you into a state of nerveless calm.

âEnter,â rings out a clear, cool voice from within the study. The massive ebony doors, intricately carved with the idolatry of Orzhova, swing inward of their own accord. 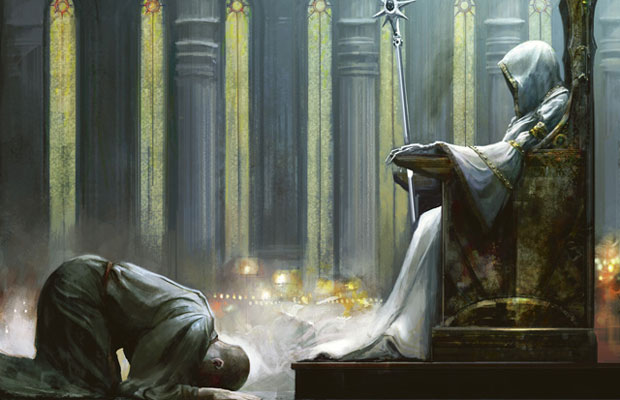 Thank you, your grace. Youâre not sure if you speak these words aloud or if they only manifest in your head. Regardless, she looks up and acknowledges your existence, nodding once, sharply. Youâre struck by the depth of her large, almost childlike eyes. Her complexion is as pale as rumor had it, like the moonlit sheen on the petals of a deathlilyâbefitting one who conducts all of her work indoors. Her hair is so dark that even in midmorning, as it is now, the lustrous ebony locks gleam blue as if touched by stars.

She tolerates your stare as she writes, not raising her eyes from the parchment. She moves the swanâs quill in sharp, angular strokes, creating rivers of orderly black script across the page.

âWell, you asked for this meeting,â she finally says, still writing. Her face hasnât changed, but you feel as if somehow sheâs having a chuckle at your expense. You open your mouth to respondâusually notoriously witty, you find all your words have deserted you. She puts her pen down and lifts her gaze to meet yours, resting her head on her right hand. 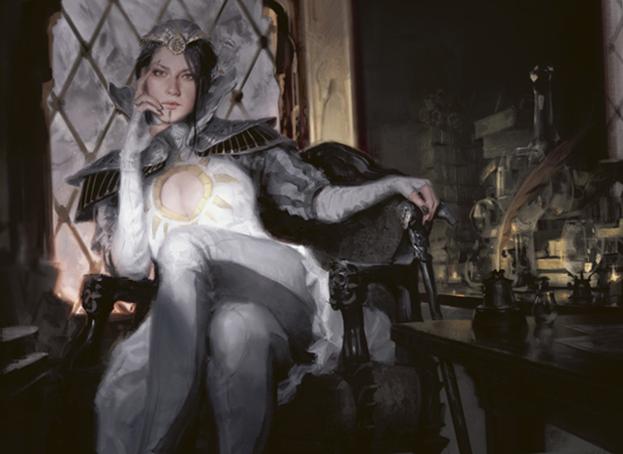 âYou know, youâre better-looking than I expected,â she says.

Teysa Karlov smiles, and you feel wry, cool fingers slip inside your soul and wrap themselves around your simpletonâs heart.

The Grand Envoy of the Orzhov Syndicate herself recently honored this humble scribe with a few minutes of her time. She was also kind enough to share a dram of a brand new Jim Beam white whiskey (in which she is an investor). Karlov will represent Orzhov as a Guild Champion in the running of Niv-Mizzet's Implicit Maze, ostensibly the event of the year. Karlov's new chain of non-dairy frozen snack shops has been wildly successful, and her controversial investments in homunculi education have won her respect, if not affection, from large factions of the Gateless population. While Karlov declined to speak on her rumored involvement with Boros frontman Tajic, and demurred when asked what exactly is the ânon-dairyâ replacement component in her addictive sweet treats, she did agree to let us have a peek into her personal realm. I present to my readers the âguiltyâ pleasures of her grace, Teysa Karlov:

âGuilt is a commodity,â says Karlov. âFree yourself from it, and be proof against bondage. My adversariesâand alliesâattempting the Implicit Maze would do well to study my list of guilty pleasures and remember: Power is not in the position, but in how you position yourself.â

I hope you thoroughly enjoyed this glimpse of Ravnicaâs own enigmatic and lovely Grand Envoy! Thank you, as always, for your eye-time. Your humble scribe,

Editorâs note: Correspondent Jacob X has been reported missing. Inquiries at the former residence have been unsuccessful. Though the official Azorius investigation is still open, we at Raven-Mad feel in our collective guts that Jacob has given the ultimate sacrifice for his journalistic art, and we can only hope that our colleague has found a soul mateâor become someone else's.

Disclaimer: This publication is currently renegotiating its insurance policy with the Orzhov Syndicate.

Did you catch the hidden message in Teysaâs interview? Comment or tweet at me with your answersâall participants will be entered in a drawing for an altered card and a ânon-dairyâ frozen treat.

Until next time, may Magic be your guilt-free Rice Dream vanilla bites with rich, thick chocolate coating.