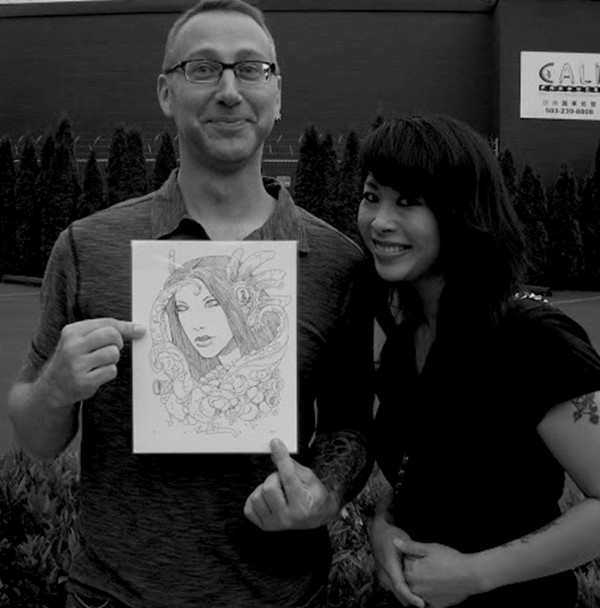 A couple beers and a couple Jamesons into our PDX hangout, I waylaid rk for a fangirl moment as we headed to Rum Club. For a modest fee, rk sketched what Iâd look like with tentacles.

Iâm taking great personal pleasure in the fact that my first 7 Questions was with Rob Alexander and my second is with rk post. While both of these guys are downright sweet once you corner them, their on-site energies and personalities couldnât be more different. This interview series is a lot like a second lease on dating, except every prospect you talk to is interesting and successful and funny, instead of broke-ass and calling you collect from juvie and interrupting your Chem finals to MySpace message you that he âkindaâ loves you and begging you to come over and check out his bedroom in exchange for a PBR. Wellâ¦Ahem, back to artâ¦ 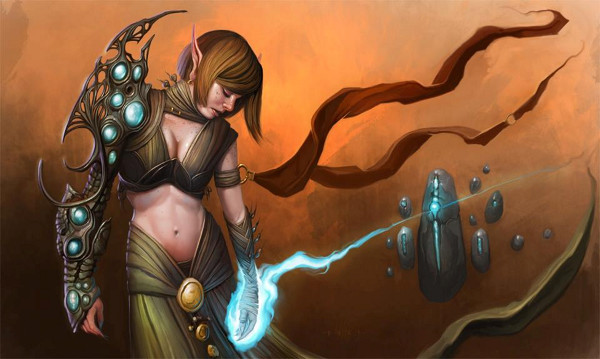 Rk is a notoriously self-taught illustrator whose fallibility is part of his charm. For a rundown of his vitals, check out this more traditional but nicely cheeky interview by the not-nearly-as-annoying-as-name-implies Hipsters of the Coast blog. Rk is a good self-promoter, and he leverages his quirky personality to keep his brand going strong. Youâll see him at a ton of events, signing, small-talking and sketching tirelessly, exhibiting an argentum-clad work ethic. 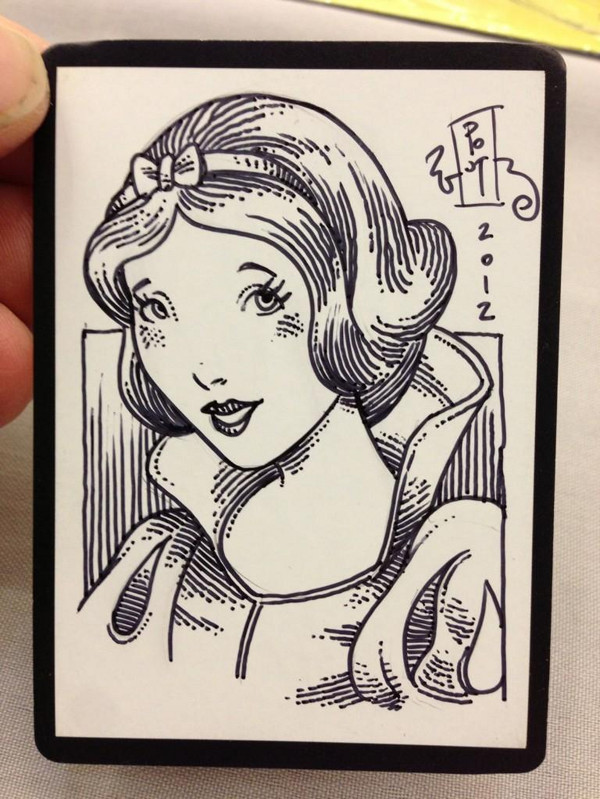 Randall, or Randyâas one might revert to calling him over cocktail napkinsâwould not tell me his middle name. He said, âIt starts with K and rhymes with a body part,â and giggled.

I have still not solved this puzzle. 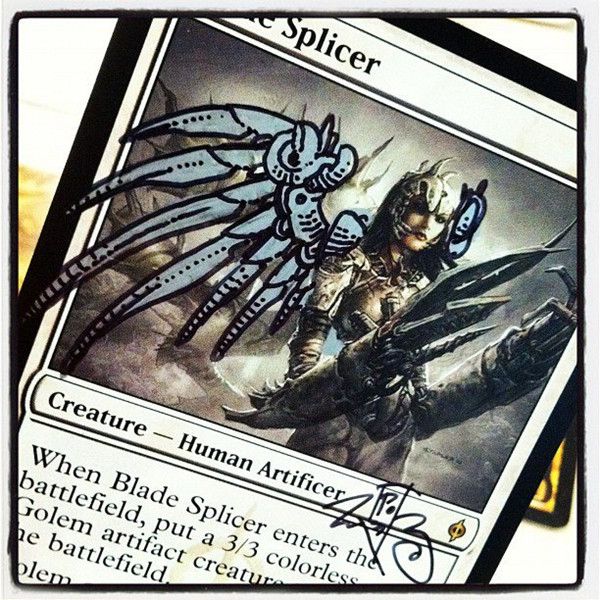 In old school astrological bounds heâs a Libra (hence the narcissism balanced by social adeptness) in the West and a Monkey in the East (hence the amazing creative energy and oh-so-snuggable personality). Rk has his own Wikipedia page, and currently goes full-time at Big Fish Games in addition to his freelance work for Wizards. His style is irreverent, dark, and iconic; showcasing muted color choices, silken textures, and an introspective Asian aesthetic that is simultaneously zen and kink. 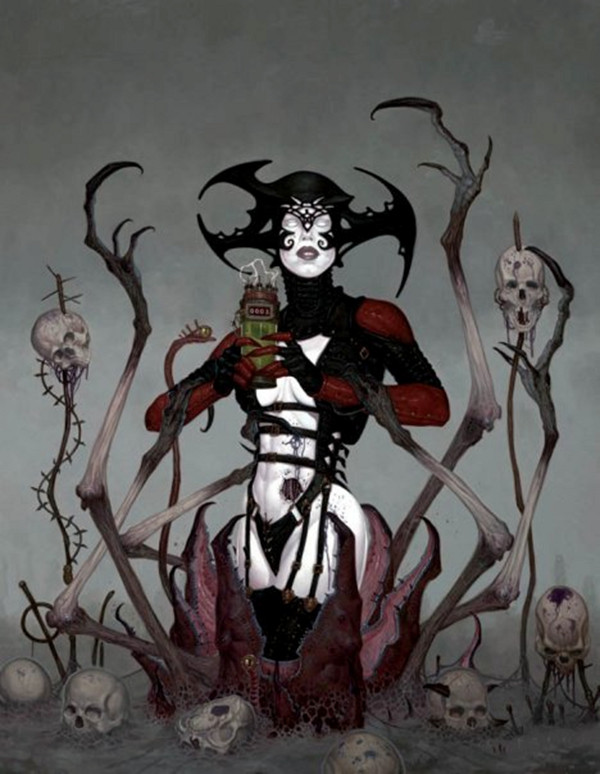 If you can grab a beer with rk, do. As a placeholder, read this interview.

1. What the hell happened to your ear?!

Oh photos! That thing is nastier looking than it felt. I wasn't doing anything noble...just slipped and fell and found out ears tear.

Word on the street is that rk was breaking into his own home when his bathtubâs hardware attacked him in self-defense.

2. Yes or no on taking the little shampoos, conditioners and soaps from your hotel rooms:

Yesssssss, they are little treasures that are meant to be hoarded. 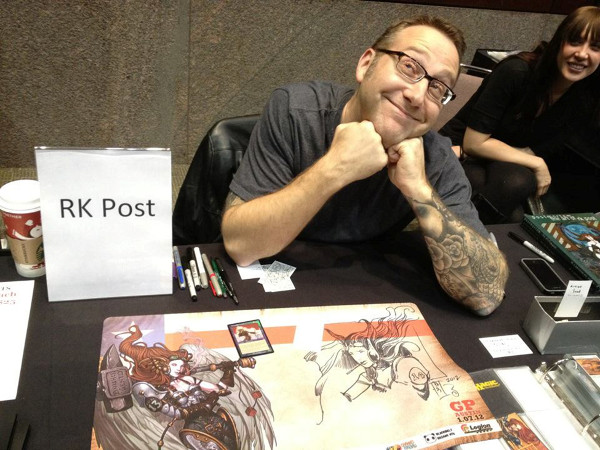 3. What's your favorite tattoo that you have?

It's a skull! Bwahahahahahaha! The Damon Conklin one on my right shoulder. 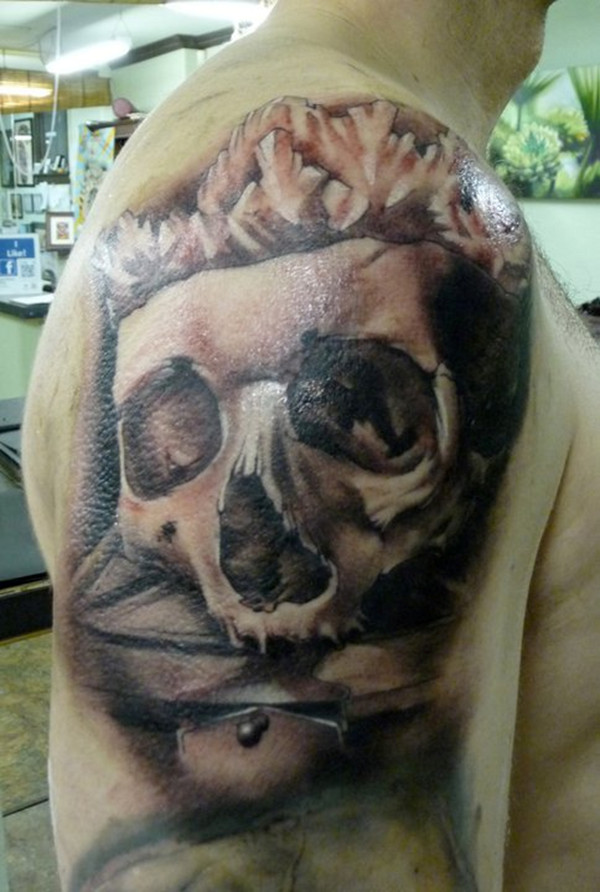 4. Please describe the pillows on your bed at home:

Memory foam with cooling shit. I had an old feather pillow that I used to death and was forcibly upgraded.

5. If you could take one female that you've drawn on a Magic card out to happy hour, which card would it be and why?

Unmask. Really it's a dude that's cross dressing....so you know that's a party in a basket. 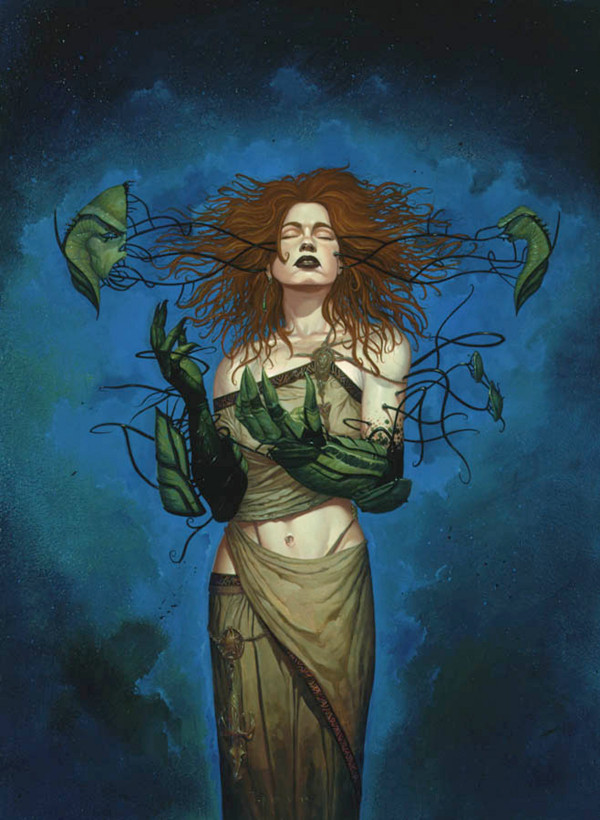 6. You look hot and fit. What's your workout regimen and diet tips for our readers?

Walk a lot, get plenty of rest, don't tear your ear, only drink alcohol on days with the word "Day" in them (you are screwed in Mexico), and never punch a bear. Hot? Really? Blush. 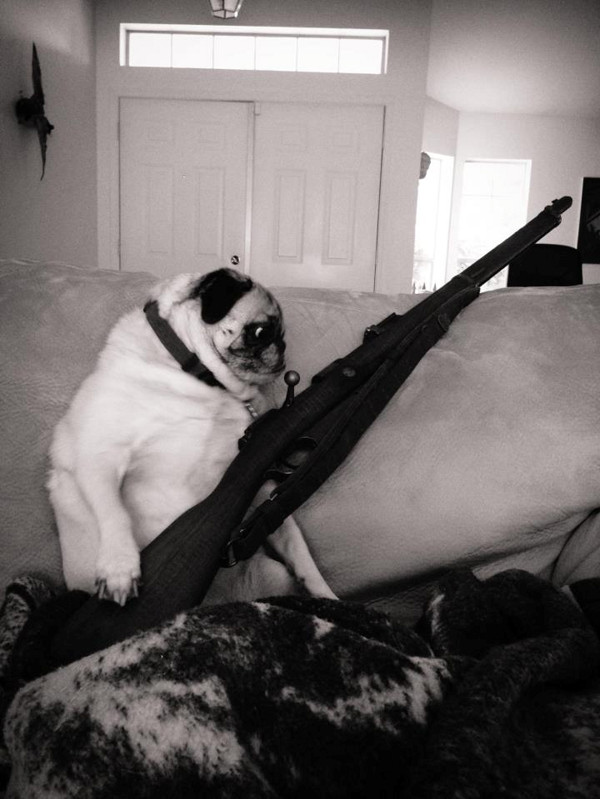 7. If you had to describe your relationship with Frank the Pug by using an analogy to another famous romance, which would it be?

Was there a famous romance that described loving a nude, hairy, mentally disabled person of the same sex that occasionally shits on the rug? If so, I really want to see it. 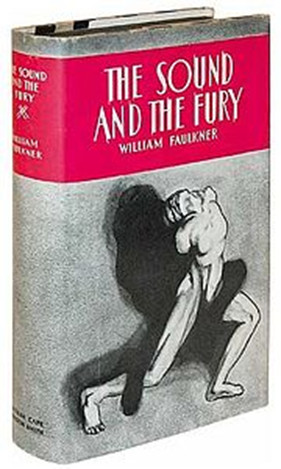 Not quite, but close: The Sound and The Fury by William Faulkner, Wikipedia.

Perhaps Marley and Me?

Make sure to follow rkâs adventures on Facebook and Twitter. Heâs fairly prolific on the avenues of social media, and some of his posts are even very funny. If you canât catch him in the flesh and want some of his product, stalk him on the aforementioned sites because heâs slightly e-commerce impaired and has no functioning online store, though he does accept credit cards and PayPal. 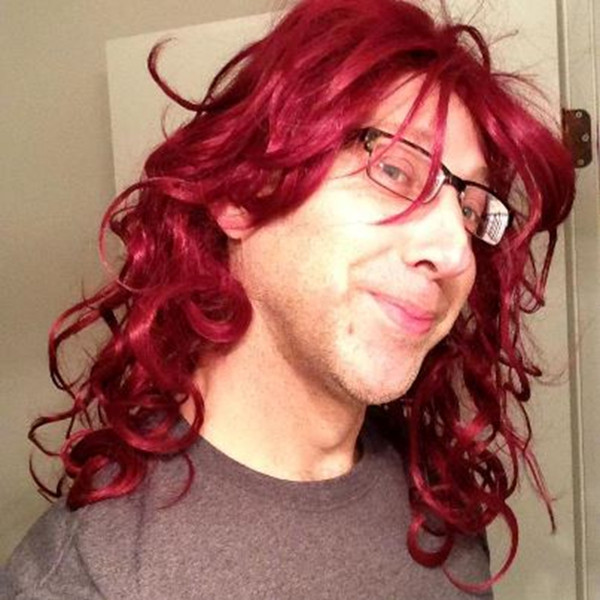 Till next time, may Magic be your...sassy guy in a raspberry wig? And your darkly hopeful pen. 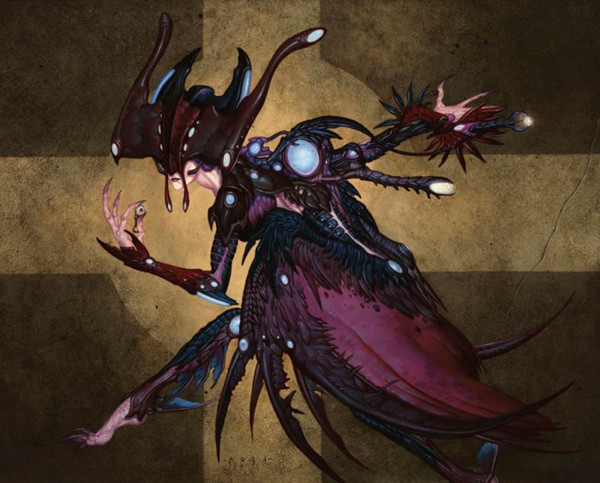