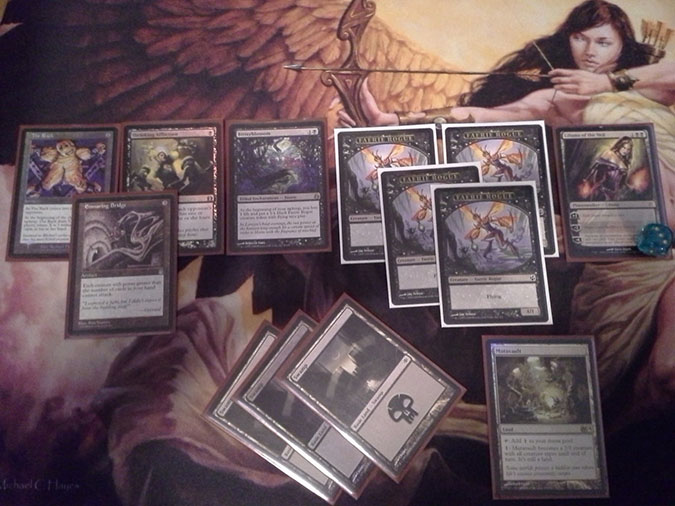 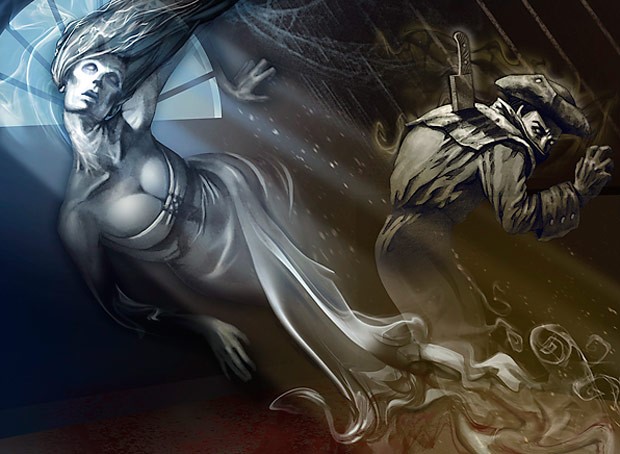 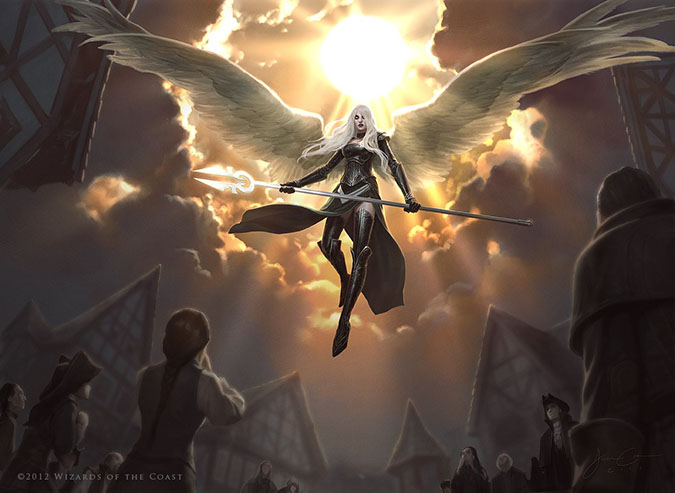 I am a competitive Vorthos.

In my gut, I feel itâs a little more complicated than just being a âJohnnyish VorthosâSpikeâ or whateverâ.â.â.âthere might even be another Magic player psychographic profile in there.

Maybe her name is Deidre.

More on that another time. 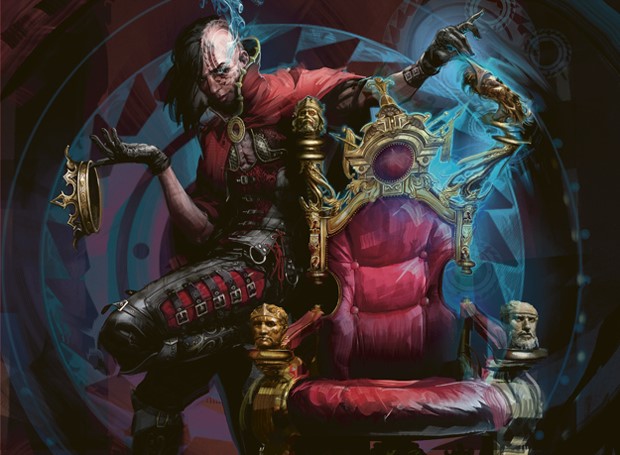 So, last year, when I decided to get into Modern and was totally fed up with keeping up with Standard, I knew I wanted to feel like a badass mage when I played. A dark mage. I told the hubbs: "I just want to play mono-black. I just want to play discard. I just want basic lands." Thank God for this format. Not even knowing it was a thing, I mentioned wanting to play Lilianas and The Racks and Thoughtseizes and just be a really nasty personâ.â.â.âsleeving up chic, black cards that coordinate so much better with each other than any other slice of the pieâs. Itâs true, and you know it. Black is the new black. End of story.

Aside: Ever noticed how much variance there is in reds on Magic cards? And itâs not subtle variance that blends easilyâitâs like bold orange-reds, pastel pinks, red-cards-that-look-green, and purplish reds have to be mashed up in my burn deck together. I canât stand it! Youâll hear more on this in the next Competitive Vorthos, about red controlâ.â.â.â 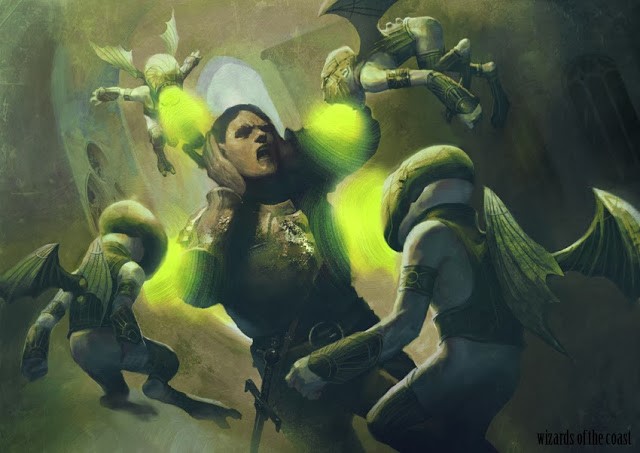 Much better informed on the meta than I, my husband was happy to affirm to me that there was viable black discard in Modern, and we put together a version of 8rack, which I affectionately like to call Lilianaâs Rack. Sheâs not offended. The name refers to the four copies each of The Rack and Shrieking Affliction, which both painfully squeeze your life from you based on the number of cards you donât have in your grip.

Perhaps best of all, I was able to choose the perfect Swamp for the context of this deck from all of the sumptuously dire and evocative Swamp art throughout the history of Magic. I ultimately went with the urban Chippy Swamp from Shards of Alara, the shining curve of the moon contrasting the angles of concrete, much as I hoped the visual appeal of the deck would contrast the extreme annoyance and disgust it would cause in my opponents. This is the Swamp that depicts Tezzeretâs old neighborhood: the sluiceways and salvage piles where he scavenged, as a child, for bits of etherium. The night sky shimmers over the darkness of the slum, providing a glimpse of hope and beauty above a hopeless and lonely existence. 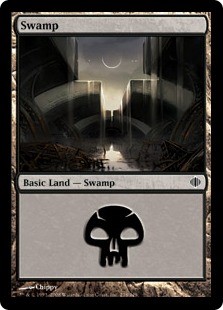 I had trouble closing out games with my initial version of 8rack, so next, I splashed blue for cards such as Creeping Tar Pit and Snapcaster Mage. The change gave it more flexibility but still couldn't get there a lot of the time. A more aggro version with Bloodghast and Geralf's Messenger felt powerful but ended up a bit slow. The next iteration was with the addition of Ensnaring Bridge. When the unbanning news came out, I was like, "Bitterblossom. I remember that b--- from back when Faeries got banned during Shards. Can I put that in the deck?" Yes, yes we could.

I just found out there's an informative 8rack primer by Robert Leva on MTG Salvation. If youâre interested in the deck, this guy has been working on it a long time and is really conscientious about discussing all the angles. Brewing and trying out decks that are new to me always reminds me how fantastic a creative outlet Magic is, and just how great the hive mind is at investigating possibilities. There are rarely ever truly brand-new ideas, but people are constantly coming up with original solutions and innovative takes or finding unique interactions that riff on an ideaâ.â.â.âIt's amazing. And the dedication that people put into their decks is inspiring.

You know what's fun? Sitting behind an Ensnaring Bridge and a Liliana with an empty hand as you wait for your opponent to do nothing on his or her turn, so you can draw your card, attack with a swarm of stinging faeries on your turn, and then sit back to relax again as you pass the turn and watch the rack tighten its grip. 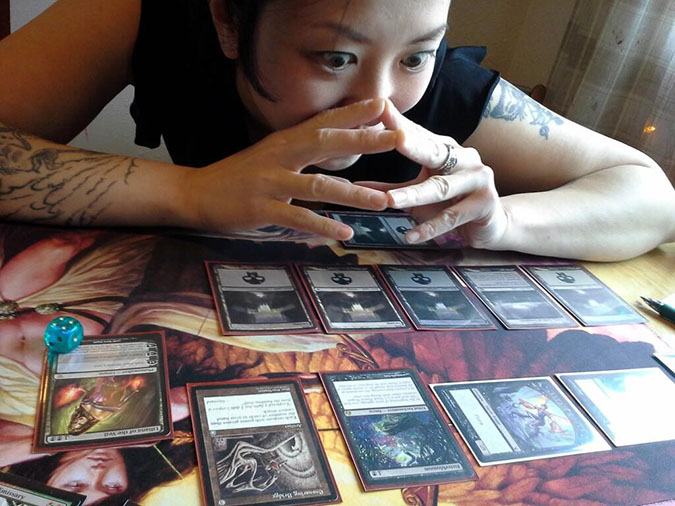 Wellâ.â.â.âitâs fun for me (and for you, if you're piloting this deck). I can't speak for the opponent.

I was super-excited to see 8rack making a splash today at Pro Tour Born of the Gods in the hands of Arjan Van Leeuwen (deck tech here). I'm certainly nothing close to a high-level player, but over the last few months, I have run 8rack a lot with a critical eye against several format staples, such as Affinity, KikiPod, Twinâ.â.â.âand some of the formatâs weirder decks, such as Tinfins and Living End (also seen on #PTBNG coverage, in the hands of Michael Hetrick).

After all my testing, I can personally attest to the fact that the 8rack deck is more gorgeous than the next guyâs sixty. One hundred percent match win rate on that front. The latest Bitterblossom version (12-pack? Lilianaâs Fae Pride Parade? Ensnaring Rack? Bridge to Nowhere?) is evil fun at its finest when it's working properly. Seems like it has potential to be a top contender in the hands of the right (skilled) players.

I lobbied hard for Memoricide and Surgical Extraction in my main, but alas, they didnât cut it. There is no such thing as victory without sacrificeâ.â.â.â 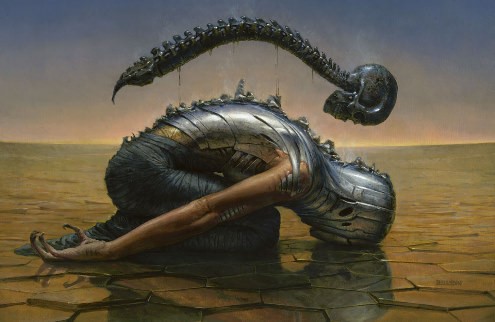 Till next time, may Magic be your artistic bloodthirst and quest for ultimate domination.