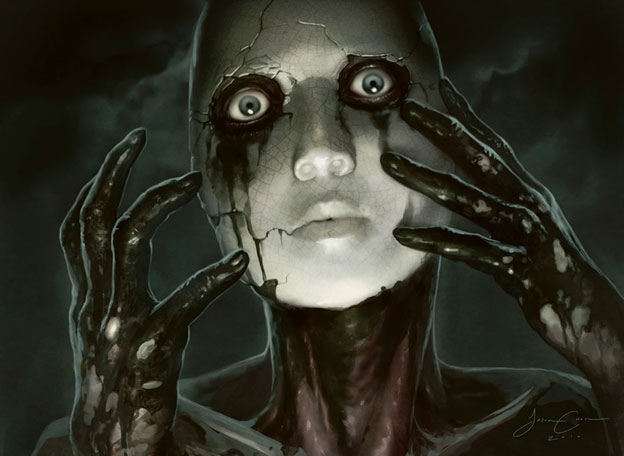 So, I have a super-weak stomach for gore, horror, or anything remotely scary. I watched Scream when I was in high school like a year after it came out, at a friendâs house, and then I couldnât sleep for months afterward. This was in 1997 or so, and I would sometimes think about scenes from the movie and have bouts of sophomoric âparanoiaâ well into the 2010s. Same thing for The Ringâto this day, Iâm still petrified by snow on the TV. However, my irrational fears and late-night overactive imagination donât keep me from appreciating the stunning aesthetics that often go hand in hand with the dark, violent, gothic, and frightening. Some of my favorite MTG images are definitely dark in nature. I mean, I do call myself a black mage, right? 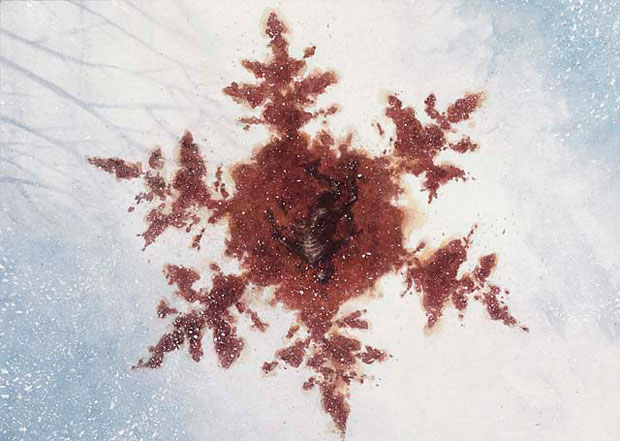 Some of my favorite dark arts include both Deathmarks, Chancellor of the Annex, Martyred Rusalka, Nirkana Revenant, Make a Wish, and, of course, Phyrexian Unlife. And thatâs just off the top of my head. I asked my Twitter friends what some of their favorite creepy images are, and I received some great responses: 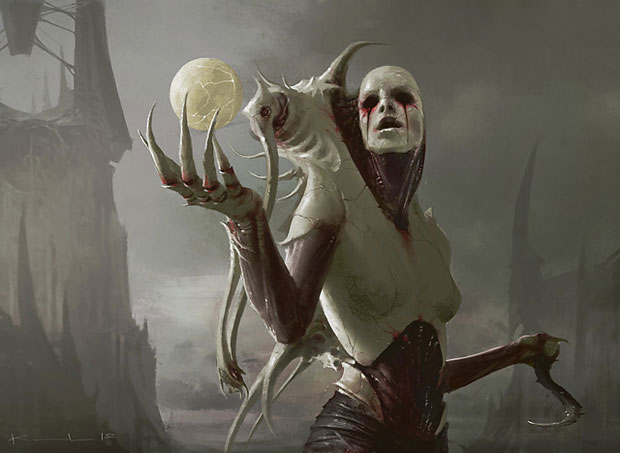 @moxymtg http://t.co/5ck2PahrOQ opened Living Wall in my first pack ever, always thought it was super creepy as an artifact creature

@moxymtg Gaze of Pain, and I wouldn't say "favorite" more like "difficult to expunge from memory"... #OwMyEyelids

@moxymtg Pulling Teeth, not close. A far second for very chilling assumptions you make upon reading the flavor text: pic.twitter.com/3AV9S8wKEv

@moxymtg Village Cannibals is creepy, but Kindercatch took it up a notch when I saw the child arms #SqueeNopeNopeNope http://t.co/s8YXaSiGwB 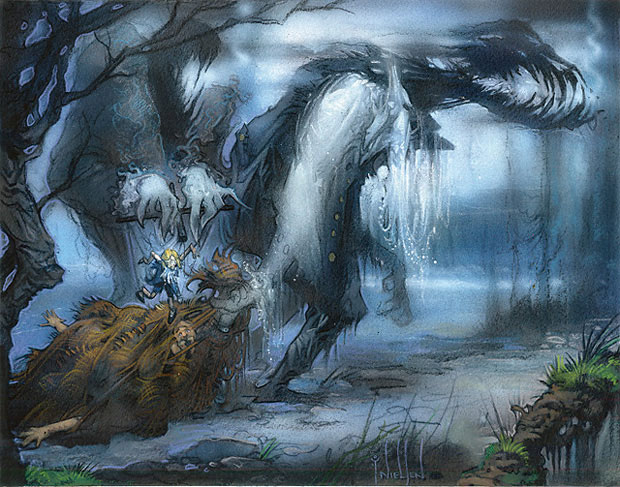 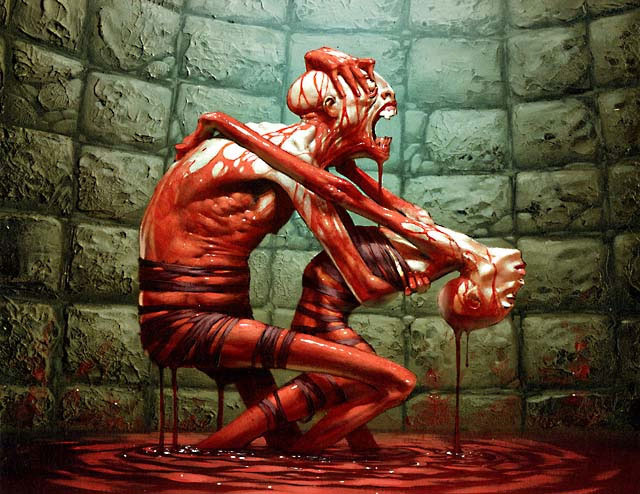 @moxymtg surgical extraction, having anything removed from your body like that is just wrong :( 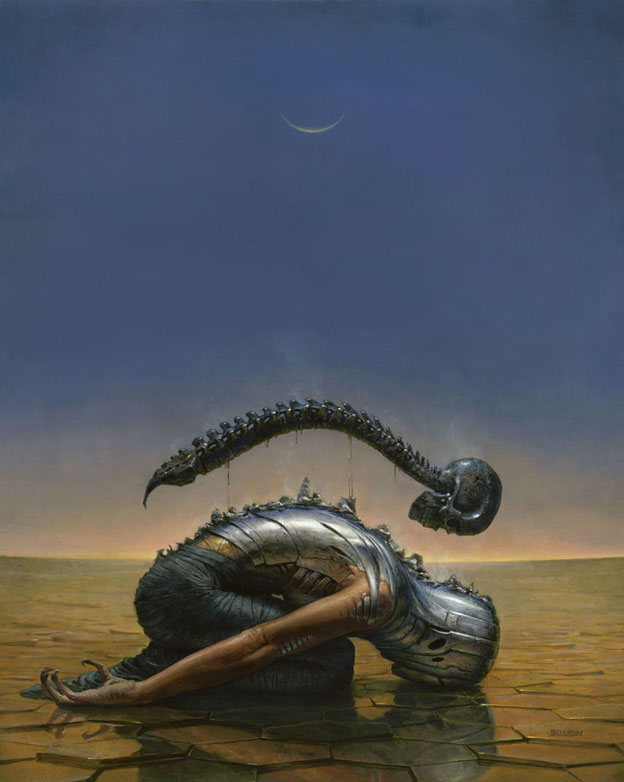 Ah, Surgical Extractionâanother one of my all-time favorites! As disturbing as the above images are, theyâre also all really beautiful in their own ways: the richness of color in components like blood, the dramatic contrast of light and shadow, the interesting compositions because something is shown from a too-intimate or shocking viewpoint, or because the body is positioned in a melodramatic way. Gathering Magicâs Mike Linnemann and Ant Tessitore recently had Steven Belledin as a guest on their Snack Time podcast, wherein they discussed this piece at length.

Now that weâre done with the MTG art-ogling, on to the cosplay! When I was looking for a single-shot cosplay to do a few weeks ago (I only had a couple hours to shoot), Phyrexian Unlife was one suggestion (thanks @BenCounter) and got me thinking about this whole scaryâbeautiful thing and how itâs never too early to consider what youâre doing for Halloween. Also, Iâd recently tried a Jeleva, Nephalia's Scourge shoot (that article forthcoming) and had some trouble with white makeup and wanted another chance to practice. So hereâs how I did it:

There are a ton of âclown makeupâ and âwhite makeupâ tutorial vids out there, so Iâm just going to show you a couple that I found inspiring/informative.

My experience is that there are several ways to achieve a given look. I didnât have the exact materials that either of these professionals used in their videos, but it worked nonetheless. I didnât use their exact processes, but it was close enough. I started with a base layer of liquid white and then sponged on the thicker clown white. I used the liquid eyeliner to do the black Phyrexian Oil effect around the eyes and to add some of the âcracked eggshellâ detail. Donât expect it to turn out exactly the way you want the first time. I think itâs like painting anything else in that practice makes perfect, and your muscle memory and technique will improve with every repetition. The most important things I learned:

To take the photo, I did this really janky setup in my bathtub: 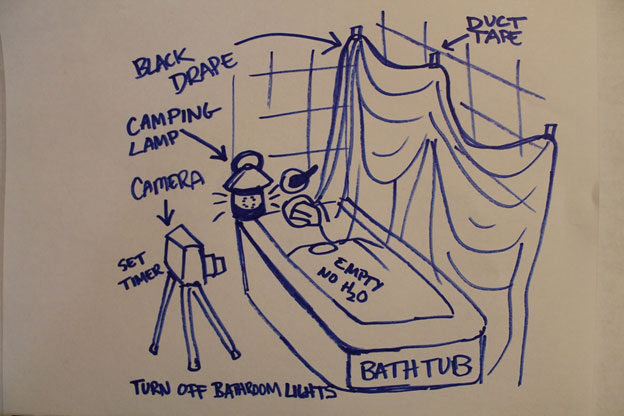 Then, I stripped down, got in the tub, and dumped (applied with large brush) the black poster paint over my neck, shoulders, arms, and backs of hands. Kneeling in the tub with the camp light in front me on the edge of the tub mimicked the lighting in the card art fairly well. Using my left pinky to do the button pushing, Iâd reach out to focus the camera on my face and then use the timer to snap the shot. Not the most comfortable shoot everâ.â.â.â

There were at least a dozen others that were unusable for one reason or another. Toward the end of my patience, I realized I had a spare mirror I could prop behind the camera to help me see what was in frame. Duh. That helped, but as usual, I was sweating and pissed off by the end of the shoot, vowing Iâd never get in costume again. So, also as usual, I really hope yâall like the results so I can say it was worth all the pain. Cosplay: the bad relationship you just canât quit. All hail Phyrexia. 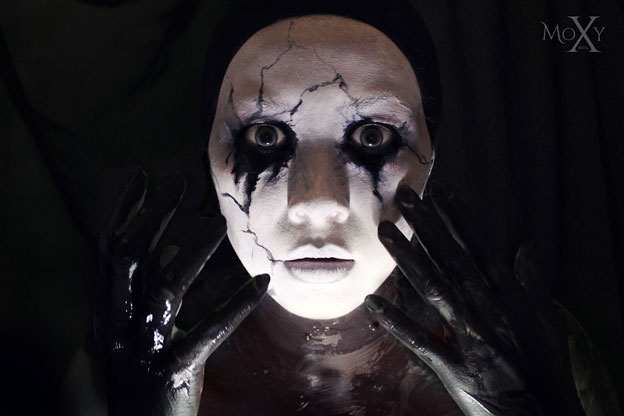 If I were to shoot this again, Iâd definitely want a photo assistant there to help so I could focus on the pose. Iâd like to have a night sky behind me when my photography skills improve, too. In terms of makeup technicalities, I also need to get a tube of black face paint so I can do the trick from the tutorial video to get the tears to look more wet and runny. I am a little more serene in this photo than the card art, but Iâm happy that the finished image is still very recognizable and that the eerie prettiness is there. Of course, thatâs just my opâwhat do you think?

If you compleatly dig my stuff, Like my Facebook page and stop by Moxymtg on Deviantart to get high-res downloads of my pictures (Unlife looks especially rad blown up). Suggestions for cosplays are always welcome.

Till next time, may Magic be your futile tears of Phyrexian Oil. Bwahahahaha!