Jace: So, I could use a little help hereâ.â.â.âmay have gotten in over my head. Again.â

Galadriel: âAnd for you, Jace Beleren, I give you the light of Eaerendil our most beloved star. May it be a light to you in dark places when all other lights go out.â

Chandra: âThanks, Gaddy. But I got this.â Nissa: âThis is so gross.â

Okay. So the Gatewatchâs arrival on Innistrad might have gone a little worse than they imagined. With all the squelchy, slimy, tentacle-y, alien flavor infusions everywhere, the plane has definitely taken a turn for the totally inhospitable. I mean, unless youâre into that kind of thing. But the real silver lining, for us of the Vorthos persuasion, is getting to vicariously enjoy the discomfort. And not in a completely sadistic way. I mean that seeing some of our favorite Planeswalkers way out of their comfort zones is sure to draw new aspects of their personalities out from the safety of ambiguous shadows and into the light. Weâve already learned a ton about professional stoic and man-about-town-doing-nothing Sorin Markov; as well as Nahiri, who was previously little more than a pretty face and a Caw-Blade enabler.

Kaladesh, Chandraâs home plane, is on the horizon. So Iâm especially interested in what effect (if any) this pit stop in gothic horror and bad romance will have on our fiery-hearted friend. Will she push back the darkness? Will it push on her? Is her sense of self strong enough to withstand the influence of Emrakul and allow her to bring her usual indomitable fire and candor to this battle? Will the planeâs fallen and twisted faith illuminate her own feelings on that subject? And most importantâwhat will she think of the local food? 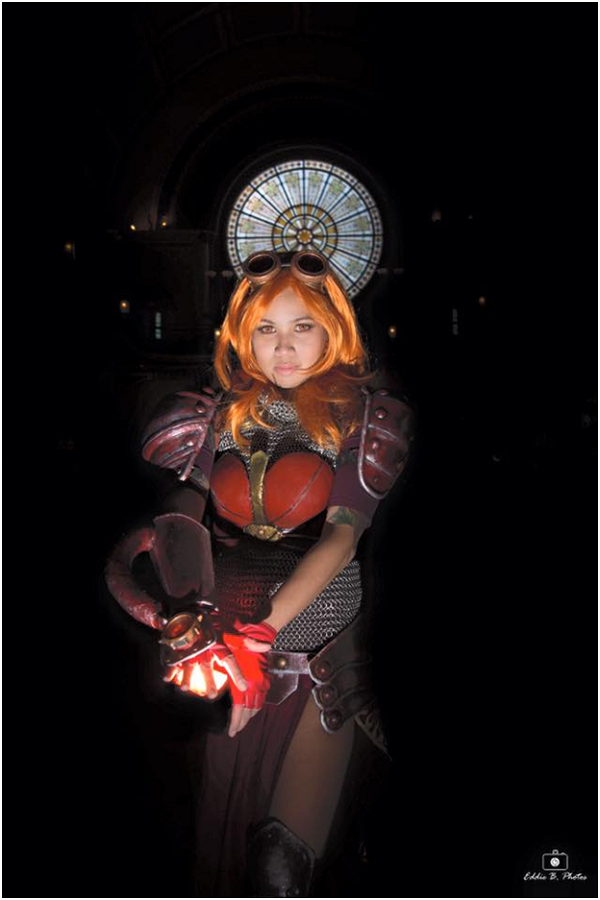 âI know weâre in a cathedralâ¦ but is anyone else really craving spicy takeout?â

Today Iâm bringing to you some amazing pictures of fan favorite Chandra, the spunkiest of punky Planeswalkers. I hope you enjoy this interview and the costuming work of gamer, Magic: The Gathering player, and art fanatic Liz Montinola-Dimailig, a cosplayer who truly exudes the spirit of Red. 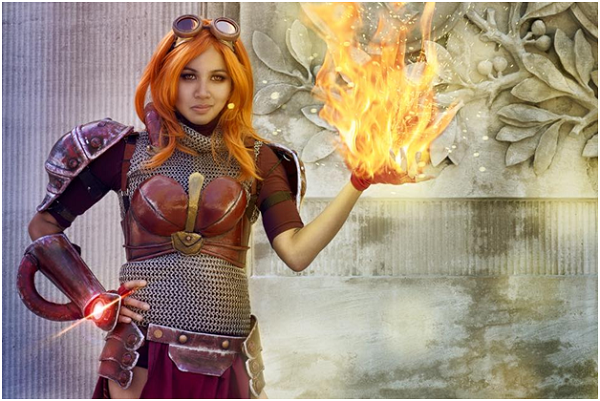 My name is Liz Dimailig and I live somewhere in the southwest suburbs of Chicago, IL. I work as an Office Manager for a Home Health Agency in Indiana.

Personally, what are you looking forward to in Eldritch Moon?

Getting closer to when we go back to Chandra's hometown! (winks)

What about Chandra inspired you to cosplay her?

Her armor. I was looking for a more challenging project after I cosplayed Hit Girl. Since I was currently playing a Naya Commander deck back then, I thought Chandra's armor would be a good step up. It entailed minimal sewingâwhich I absolutely had no skills forâand I would get to work with Worbla for the first time too. But who are we kidding? Chandra's armor is the best and most notable in MTG (winks). 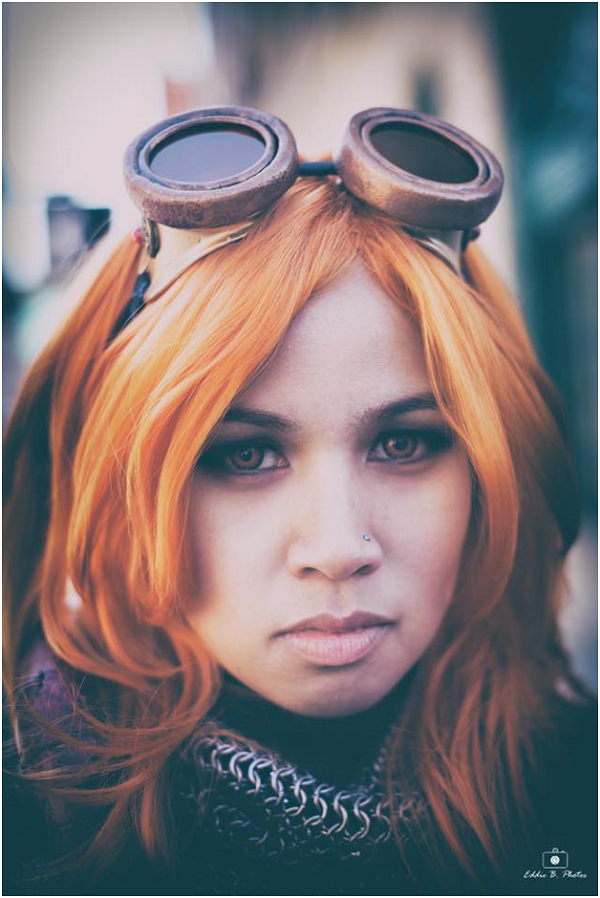 So, Chandra arrives on Innistrad. What's the first thing outta her mouthâ.â.â.â first impressions, assuming she's never been there before?

Looks like it's time to put on the gogglesâ.â.â.â

The big news: Liliana joins the Gatewatch! What's your call on how the other members of the watchâespecially Chandraâreact to this? 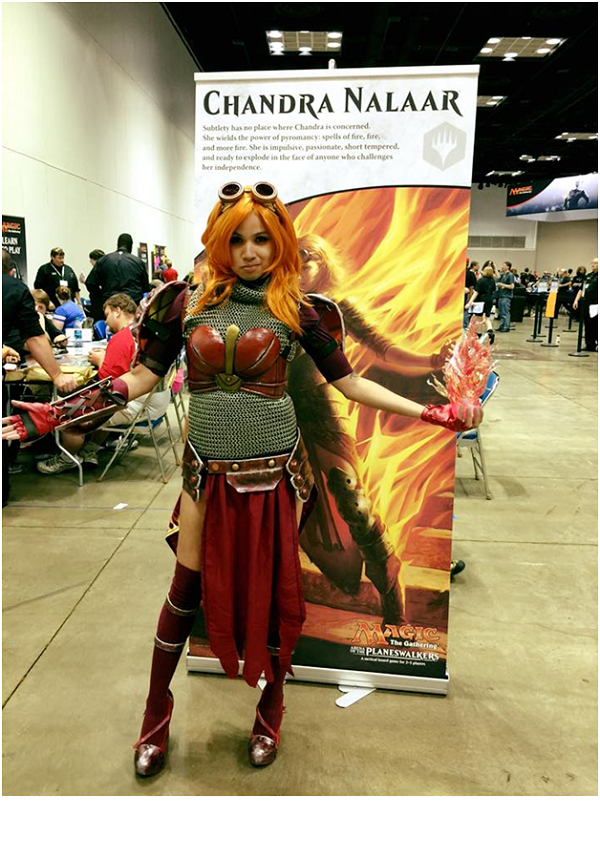 What decks / formats do you enjoy, and what hobbies fill up your spare time?

I haven't gotten to play much Magic recently but whenever I do get the chance to do so, I prefer playing Commander since it became too challengingâtime-wise and financiallyâto keep up with all the new sets. I run a pure Green Elf deck with Eladamri, Lord of Leaves as my commander. The last Standard deck I ever madeâNayaâended up as an expensive disappointment.

Most recently, I've been playing a lot of video games on the PS4. Mainly Destiny: The Taken King. 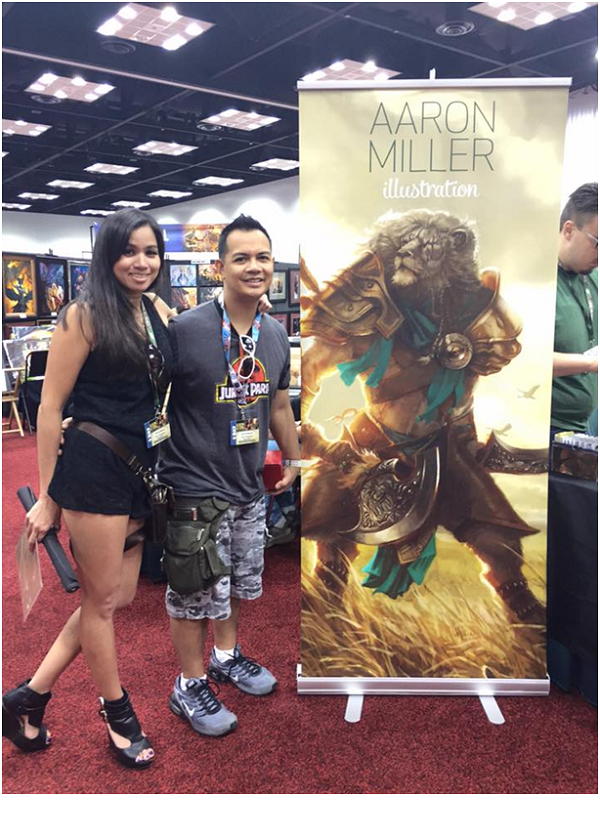 It looks like you enjoy a lot of different fandomsâwhat do you love the most about gaming, sci-fi and fantasy?

I really do enjoy a lot of geeky things, and I'm very fortunate to have a husband, kids, and friends who mostly enjoy the same fandoms as I do. That's what I enjoy most about itâbeing able to share your geekery with those you love. For example, gaming: even though we've ended up having to buy two of the same consoles and multiple game copies for them, we've realized that it's our form of family bonding when we're playing with or against each other and our clan mates who we've already considered our big extended family. 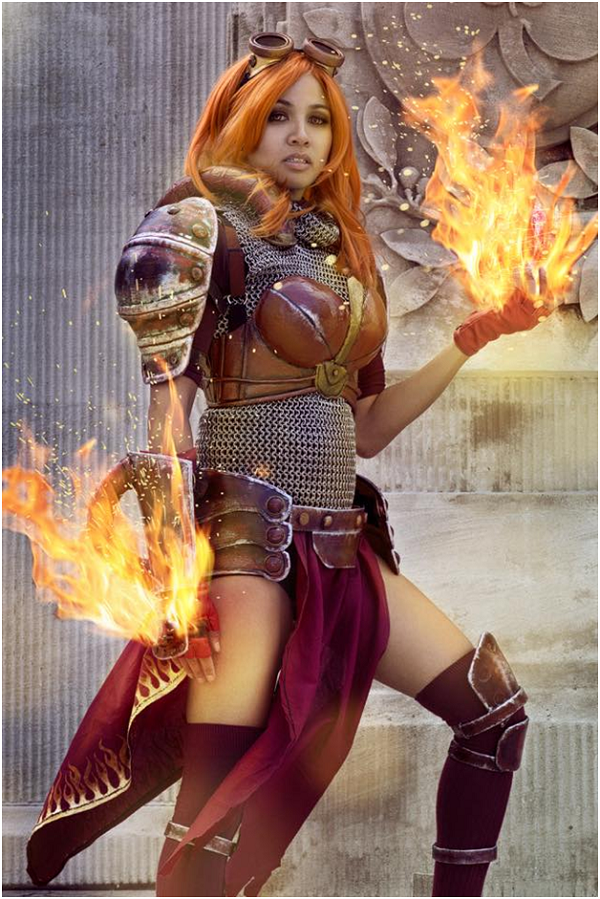 Give us some insight to building your Chandra cosplay: what was hard to make, what parts you commissioned, and how you chose the perfect shade of red for the wig!

First off, I had to decide which Chandra armor I wanted to make. And so I chose the one based off of Brad Rigney's illustration because I thought it was the sexiest and sassiest one out there.

This was my first ever armor buildâfirst time working with Worbla's Finest Art thermoplastics, craft foam and chainmailâand so I was pretty excited and nervous at the same time. It took almost nine months to build, with a lot of blood, sweat, tears, and dollars spent. Many times I've thought about giving up when all my planning just didn't come out right.

The most challenging part was figuring out how to connect the huge tube in the front upper left to the back. There were practically no reference pictures for it. I could only go by the funko pop figurines and they didn't help much. I bought the chainmail from Celestial Chainmailâshe's really the only one around who sells the Chandra-specific chainmail. My cousin also made the fireball for me with the 3D printed case and the fancy LED inside.

As much as I wanted to, I obviously couldn't wear real flames for hair so I went with the neon orange wig that I felt was closest to the color of fire. I just bought it off eBay. 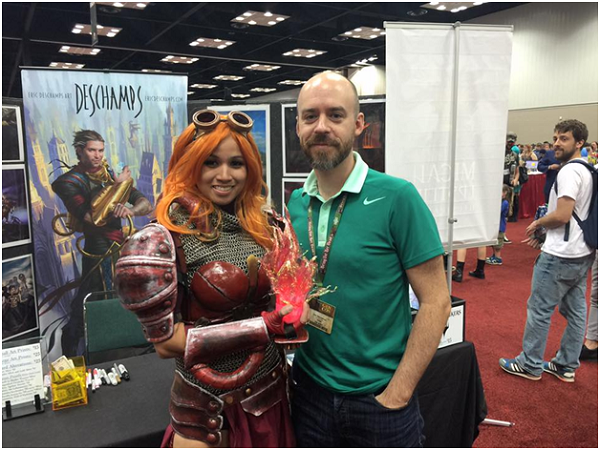 What was it like meeting Eric Deschamps while in costume? What are your favorites of his art pieces?

Getting to meet MTG artists was simply surreal. More so with a legend like Eric Deschamps. It was toward the end of the day when I dropped by his booth and I was tired and my feet were aching so bad. But the moment we got to meet him when his table was finally free of people, all my complaints disappeared out the window. I just wished I had his new Chandra Planeswalker card to get autographed.

You notice I didn't answer the part about my favorite Eric Deschamps piecesâ.â.â.â that's because it's like picking out your favorite child! I'd like to pick all or at least most of it (laughs). 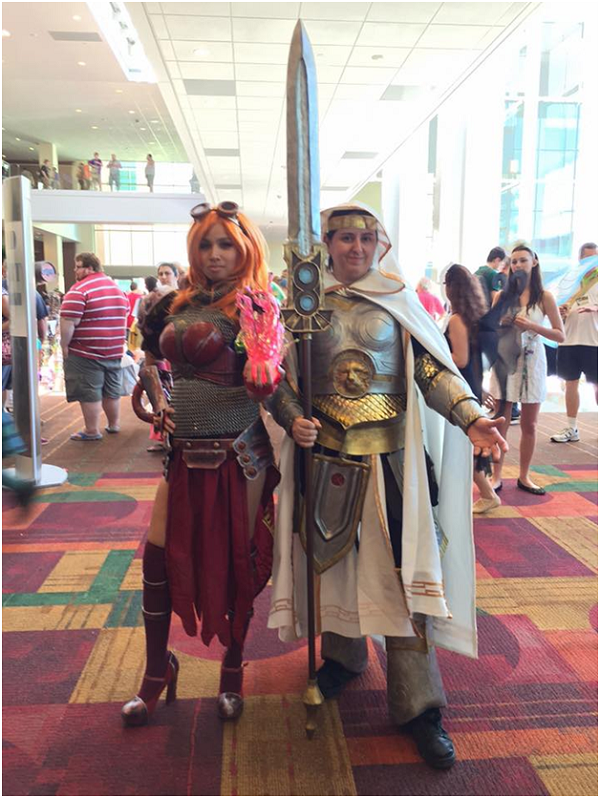 With Velvet Rose Cosplay as Elspeth

Same question as before, but for Steve Argyle.

It was at Gen Con 2015 when I first wore it. I had just left the Ultra Pro booth where Christine Sprankle was also sporting her amazing Chandra cosplayâI was still giddy as a school girl after taking a picture with herâwhen I made my way toward Steve Argyle's section. His wife was actually the one who noticed me and kept calling out to Steve to look up from his signing to check out a really cool Chandra costume. When he did, he just jumped up, grabbed his camera and said, "I really need to take a picture with you." I almost fainted. Say Chandra's going on vacation. She can choose any location on Earth. Where does she go, why, and which Planeswalker does she choose to take with her?

A girl that hot will want some way to cool off. What better way than to spend that vacation on a nice tropical island resort, with Liliana on her side. The two of them will never be thirsty (winks).

Is there anything you really love about the story / design of SOI and EMN?

Man, I think they do have cookies over on the dark side. 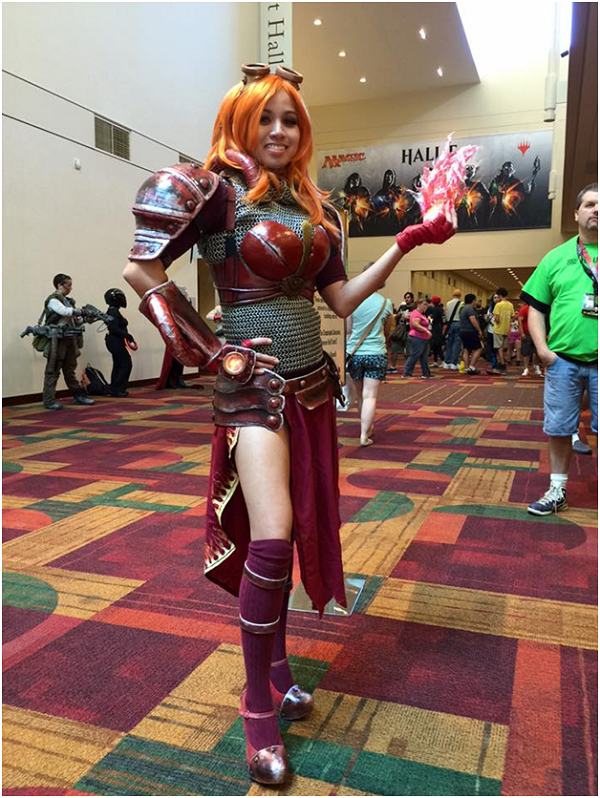 Do you have more MTG cosplays planned?

I actually do. I saw a really awesome armored female Jace on Deviantart that I hopefully would get to build one day.

Where on the social media can fans follow you?

Fans? (laughing) I don't really know about that. But anyone can check out my Instagram account: biznatchian. I post cosplay and mostly random stuff in there.

Say Chandra brings back one souvenir from Innistrad to add to her room's decor at Gatewatch HQ on Ravnica. What is it?

An Emrakul bobblehead. Do they sell those, perhaps?

Next time you see an MTG cosplayer at an event, say hi, stop and ask to take a picture, get to know them a little. And online, remember that compliments are always appreciated, but to be respectful. Politeness makes the day; creepy comments ruin it. These people work really hard to not only express themselves creatively, but also to bring smiles and a little more color to our lives.

Till next time, may Magic be your biggest of BOOM! spells and your outside voice, when it comes to saying things that matter and blowing up stuff that shouldnât be there.