Login
0 Item
Advanced Search
Sign In
Create Account
John and Michael are players that I have known since I started working at a Local Game Store in Minneapolis. I have seen them at weekly Sealed events, PPTQs, and GPs, and I wanted to find out what life was like as a father-son duo playing Magic. When we met up for the interview, Friday Night Magic had just ended. John, the father of the pair, told me about the highlight of his rare foray into Standard: a 56/56 Electrostatic Pummeler and a 3-1 record. Michael was quick to point out to his father that he was playing against a modified Planeswalker deck that wasnât able to handle a smaller one. We had a good laugh.

Michael was taught to play Magic by his brother during Dragonâs Maze at the Magic: the Gathering club at their elementary school. He was hooked, even though his brother stopped playing. Michael then taught their dad how to play over Christmas break from packs he had received as gifts. That was during Theros, and the pair have been playing together ever since. Michael says that what drew him to the game was the idea that it was a strategy game with a little bit of luck mixed in. John said that he used to play Dungeons and Dragons when it first came out, and Magic combined âa love of fantasy, Texas Hold âEm, and competitionâ for him.

John and Michael agree that having another Magic player in the house helped them get into the game more. Michael says that the most important part, to him, was just having someone to play with. John agrees, adding that he finds it helpful to âtalk strat and talk over the basics. It was nice to have someone in the house to teach [me] the fundamentals.â John and Michael regularly consume strategy articles, and will have discussions about them around the house as well.

Shortly after they started playing Magic together at home, Michael and John began playing more at stores and less at home, and both are enjoying the increased competition. They progressively built from Friday Night Magic to tournaments like GPTs and PPTQs. âWe donât miss competitive Sealed events,â John told me. Both John and Michael are Limited specialists, favoring Drafts at Friday Night Magic and Sealed over other Grand Prix formats. However, because of all of the Sealed events they do, they own most Standard-legal cards and have even recently traded into Bogles. They have been going to Grand Prix since their first, GP Vegas in 2015.

To the rest of the Holcomb family, playing Magic is John and Michaelâs âthingâ to do together. âI coach my other sonâs baseball team in the summer,â John says, and Magic gives him a chance to put similar time in with Michael. Michael adds, âMy mom thinks we play too much.â

Both John and Michael consider themselves to be competitive players. According to John, âWhen we sit down, itâs game on, itâs all about competing. In the summer, weâre playing 5 nights a week.â To Michael, they have not yet hit their highest level of competitiveness. âWe play competitive events but we donât go very far [from Minneapolis] and we havenât made any RPTQs yet,â he says. John says that when he plays Magic, he plays to win. An aspect of the game that he enjoys just as much as winning is the social one, where he knows the people in the stores where he plays and the friendly conversation flows. Michaelâs goals when he plays Magic are to improve his play, to win, and to have fun. He says that âthe order changes based on the event, and improving is always at the top because it helps me with the other two goals.â

John and Michael both consider Magic to be a hobby, rather than a job. John works as a Senior VP at a health insurance provider, and Michael started high school this year. However, they still find a way to keep Magic in their lives. For John, itâs easy for him to add Magic to his list of priorities because it âblends family and fun.â He adds that the three hour blocks that Magic takes up make it easy to plan around. Michael says that he wants to get good grades first, and since Magic is âthe main thing I do outside of homework,â it comes next. The only time anyone will see John without Michael at a Magic tournament is on a school night.

John and Michael plan on continuing to play together until Michael goes to college in three years. As they move into the new year, both have their eyes on improving. Michael hopes to make Day 2 of a GP, and John wants to up his limited performance consistency to going 2-1 or better at drafts regularly. When I asked if they were planning on attending many Grand Prix next year, John told me that they planned on attending most of the Grand Prix in the summer, including the headline GP of the year, Grand Prix Vegas.

If you are a parent wondering whether they should get their child or children into Magic, John highly recommends it. Not only will you get a new in-house testing partner, but playing Magic can teach some valuable lessons. He says, âthe game is a nonlinear thinking game. It is one of the few games out there that is entertaining and engagingâ.â.â.â every game is win-lose, but you learn how to approach the concept. It also teaches kids how to interact with adultsâ.â.â.â Michael played people in their 30s and they treated him with respect.â Michael recommends that parents of Magic-playing kids also give learning the game a shot, saying that â[you] get to watch yourself make decisions and see yourself improve. I really like being able to do that.â

This father-son pair show that family and Magic can mix well. They learn from each other and keep positive attitudes, and set good examples for the local community. They did not provide any contact information for me to give out, but if you direct your questions to my Twitter, @MTGValkyrie, I will be sure to convey it to them. 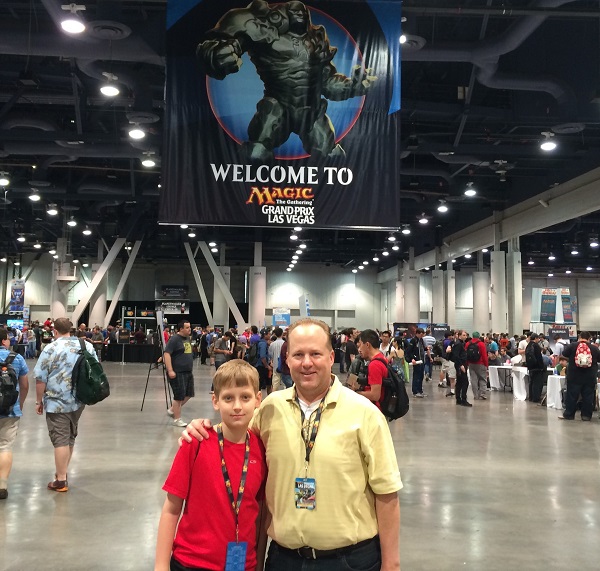