During PAX East 2020, the Magic community was given their first look into Magic: Legends - The new MMO / action-RPG created by Cryptic Studios and Perfect World Entertainment. The long-awaited game is scheduled to go into Open Beta next month. Magic: Legends will allow players to create their own Planeswalker and explore many of the most well-known Planes in Magic.

Fortunately, I was given the opportunity to ask Senior Writer Winter Mullenix some questions about the game and her involvement in its creation.

I have decided to simply list the questions and answers below to ensure that each question is clear and thoroughly answered.

Are players playing as specific Planeswalkers, or are they unknown Walkers from the same plane as their famous counterparts?

Magic: Legends empowers players to explore the Multiverse as a Planeswalker of their own creation. After the player selects their character's initial class and appearance, their Spark ignites and they embark on their first planeswalk. Throughout their adventures in the Multiverse, they'll get to customize their character in a number of ways. They can change their character's class, swap out their spells, change up their equipment, and amplify their abilities with Artifacts.

Of course, that's not to say the players are alone in the Multiverse. Players will get to meet and adventure with some fan favorite characters at launch, and they'll see more with each subsequent update!

Can you tell the readers a bit more about the class breakdown and the thought process behind what walkers and what abilities their planes would have?

Each of the five starting classes in Magic: Legends is based on a single portion of the famous mana color wheel (White, Blue, Black, Red and Green). Rather than give each class a dedicated origin story, we opted to pull from the unique themes associated with each color. These values directly influence each of the starting class designs in every way.

Going in the order of the color wheel, the Sanctifier is a ranged class with healing and support abilities. They embody White mana, so their animations, abilities, and visuals are all clear indicators of their associated values: structure, order, and peace.

The Mind Mage is a mid-range class that draws from the cool, calm, and deliberate feel of Blue mana. Their abilities enable them to exhibit thoughtful control over the battlefield through manipulation.

The Necromancer is a mid-range class that exemplifies the uninhibited power of Black mana gained through death and sacrifice. Their abilities enable them to walk along the razor's edge of life and death, enhancing their damage output and survivability.

The Geomancer is a durable melee class that encapsulates the passionate fury and raw destructive power of Red mana. Their abilities are literally explosive and they make use of the earth itself to eliminate their foes.

The Beastcaller is a short-range class that derives its powers from a deep connection with nature. They fight alongside an Aether Fox and their abilities bolster the primal strength of both them and their pet.

This is just the beginning though, the roster of classes will expand regularly after launch to keep the player experience fresh and exciting.

How much pressure was there knowing you would be the first to present these worlds in video format to a legion of fans who have only seen them through static art before?

If anything, we are honored to bring the Multiverse to life in a new way. We have been working very closely with Wizards of the Coast to ensure our stories and presentations are faithful to the IP, so I would say a vast majority of the pressure we feel is born of our own fandom. We aim to provide a fun, engaging experience for players of all kinds. Whether the player is a longtime veteran of the card game or someone completely unfamiliar with the Multiverse, Magic: Legends will have something for them.

Is there a Magic set that you feel has the most influence over the game's lore?

Great question! The established lore of the Magic Multiverse is incredibly expansive, so it is difficult to point at any specific set as the primary inspiration. Since the story of Magic: Legends is just getting started, we had to draw from several different stories and blocks for inspiration. If I had to pick any one specific block as particularly influential for the launch story however, I would say the Dominaria block in general.

Dominaria specifically has been a staple throughout the entire storyline of Magic, from the Thran and the Brothers War, all the way through the Phyrexian Invasion and the Great Mending. What went into the process of deciding to set Magic: Legends in the post-Mending period rather than any of the others?

We worked very closely with Wizards of the Coast to determine an ideal entry point for the timeline. Our goal was to ensure we kept Magic: Legends' story as current as possible while also ensuring we had a sturdy, level foundation to build upon. The Great Mending ended the Time Spiral crisis, which had a profound impact on the Multiverse as a whole. The Mending Era and the changes that came along with it are fertile grounds for the player's story to take root in. In time, players will get to see different sides of some really cool stories. Players may even get to see another side of established stories that were featured in card sets.

Can you tell us a bit more about what Planes will be represented with or without regions in the game? And what were the biggest challenges when deciding what to include.

At launch, the story will span three major planes: Dominaria, Zendikar, and Innistrad.

Players will get to explore Benalia, Shiv, and the Academy at Tolaria West in Dominaria, the continent of Tazeem in Zendikar, and the province of Gavony in Innistrad. The biggest challenge we experienced in selecting locations was the sheer number of places we want to visit as fans of the IP. We are all deeply invested in the lore of the Magic franchise, so we ask ourselves which locations we think other fans would like to see, take a look at the events taking place on those planes, and work from there. 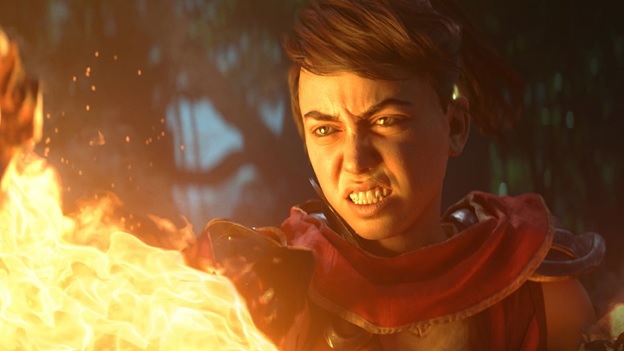 What has been your favorite aspect of working on this project?

This question really has two answers for me. On one hand, I have been absolutely thrilled to work within and build stories around established Magic lore. I've been a huge fan of the Multiverse for a majority of my life and I connect pretty deeply with a large number of the characters. On the other hand, I get to collaborate with an incredible and highly diverse group of creatives. Between Cryptic Studios and Wizards of the Coast, the sheer amount of skill and talent that surround me at any given point in time is staggering.

What were the biggest challenges when working on the project?

The biggest challenge we have experienced on the project stems from our deep appreciation of the source material. There are so many stories we want to tell, and we have to work our way up to many of them. Similarly, there are so many planes, artifacts, spells, and characters we want to bring to life in Magic: Legends that narrowing down to the ones to include at launch was no simple feat!

Do you have a character whose story arc has been your favorite to work on?

I would have to say my favorite character to work with has been Squee. Ever since the Weatherlight Saga, he has stood out to me as truly unique. His value runs much deeper than comic relief, he is a storied hero in his own rite. Putting myself in his shoes mentally was a gratifying creative exercise, and I hope players enjoy his story arc.

Were you a fan of Magic before this project, and if so when did you start?

I have been a fan of Magic from the very beginning, starting with the initial release in the '90s. I spent my teen years watching these characters and stories grow, and now I get to spend every day with them!

I hope this Q&A with Senior Writer Winter Mullenix has answered some of the questions you have had about Magic: Legends. I know many of you are as excited about the upcoming launch of Open Beta as I am, so feel free to comment below with any questions you think I should ask in the future!

Thank you so much for reading and I will see you next time!