This past weekend, all eyes were on Worcester for a taste of what the Standard metagame would look like in the coming months. As it turned out, the top decks were a mix of blue-based control, red-based aggro, and a smattering of green-based midrange. Hereâs what the breakdown of the Top 32 decks looked like: 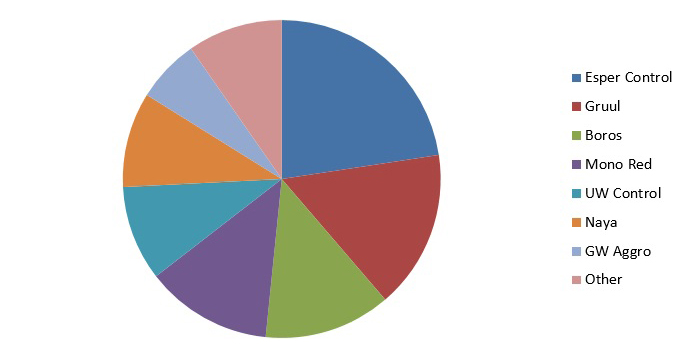 Blue is back, baby! At least I sincerely hope it is. The running joke around here is that Iâm allergic to Forests, but Iâve found myself sleeving up green decks on more than one occasion. I even declared at one point late last season that you should be leaving your Sphinx's Revelations at home until Theros comes out.

I canât wait to jam four copies of Steam Augury into every deck I play, but it seems that the time isnât quite right for the card just yet. There are still a lot of spicy new cards to play with, and Iâll be going through my top eight Theros cards at the end of this article. First thingâs first: Letâs look at a few decklists.

Even though Max Tietze made it further into the tournament with his W/W control, Calcanoâs deck is more representative of the field. By the by, I love this deck (big surprise; I know). Aetherling is among the best blue finishers theyâve printed in a while (although Consecrated Sphinx will always be a personal favorite). It allows you to close out the game very quickly once youâve assumed control, and the fact that itâs nearly impossible to kill makes it pretty good on defense as well. The spells have a nice mix of utility, though if the mirror becomes as prevalent as I think it will be, I think fewer sweepers and more counterspells might be the way to go. Iâm curious to see how well Ashiok, Nightmare Weaver works out of the sideboard, as I think itâs something of a sleeper card. Iâm not entirely sold on the copies of Blood Baron of Vizkopa, but the rest of the sideboard looks solid, especially the Sin Collectors. All in all, Iâm pretty happy at the prospect of dusting off my Watery Gravesâitâs been far too long.

Now this is something Iâm far less excited about. All joking aside, this is actually a powerful strategy, although I think this particular list could use a bit more tuning. The creature count is a bit too low for Domri Rade, although you can make the argument that you do a lot more fighting in this version of the deck due to the size of the creatures. This deck is also a bit lacking in early plays and is very reliant on having a mana producer in the first couple turns.

Normally, decks that run a ton of Llanowar Elves run into trouble when they have nothing to do with all their mana, but between all the monstrosities, thatâs less of a problem here. Posporelis has a pretty good anti-control package in his sideboard. Mistcutter Hydra is a huge beating against the nonblack control decksâas long as itâs large enough to survive a burn spell. It canât be targeted by Azorius Charm, and it canât be blocked by Aetherling, so W/U and R/W/U have hard times dealing with it. Itâs pretty bad against Esper, though, since the deck has any number of spot-removal cards that easily kill the Hydra. Burning Earth is still a thing, although itâs not as much of an auto-win as it was before. With the loss of the Innistrad dual lands, even the three-colored decks have a decent number of basic lands.

Despite my issues with this deck, itâs a good start, and Iâm sure weâll be see a lot of some flavor of Gruul midrange, especially once Brian Kibler unveils his latest concoction at Pro Tour Theros. That Kibler will play some version of this deck is probably among the safest assumptions I can make at this point.

Shifting gears a bit, letâs look at the latest version of an ever-popular deck: white weenie.

I hesitate to call this a Boros deck at all since it only plays red for Boros Charm and Electrickery. Spear of Heliod is just a worse version of Glorious Anthem here, although itâs not as though you have any other options for Crusade effects. Banisher Priest and Imposing Sovereign do a great job of letting you keep pressuring your opponent, as they can make blocking problematic. White weenie decks are usually awful against anything that plays Wrath of God, but thatâs where Boros Charm comes in. I can see why Merriam is splashing red for them, as they will often be the difference between victory and defeat against control decks. They create a damned-if-you-do-and-damned-if-you-donât situation. If your opponent waits until he has a counter for the Charm when he plays his Supreme Verdict, heâs in danger of dying to the 4 damage mode if he ever taps out. Against Anger of the Gods, Brave the Elements provides another way to keep your creatures alive.

If this deck suits your style, itâs definitely a good choice while the format is still developing.

Jeez, talk about balls-to-the-wall aggro. Red actually has a surprisingly high density of quality 1- and 2-drops. I remember when Jackal Pup was considered among the best red creatures ever. Not only is Firedrinker Satyr a strict upgrade (Mindslaver clause notwithstanding), Rakdos Cackler gives you double the turn-one, 2-power goodness. Furthermore, a turn-one Foundry Street Denizen is going to be attacking for at least 2 right away more often than not. Turtenwaldâs deck is a bit short on burn spells, but thatâs only because there really arenât any good ones in Standard right now. You know times are tough when you have to play Shock. Against the slower decks, Hammer of Purphoros provides a recurring source of damage while making any top-decked Firedrinker Satyrs quite scary. If youâre planning on playing any Standard in the near future, youâll need to be prepared for the Red Menace.

Iâll wrap up with my Top 8 Theros Cards list. Since StarCityGames Open Worcester provides the only data I have to work with, these will be the top eight Theros cards from the Top 32 decks by number of copies played. Once the set comes out online, Iâll revisit this list.

Thanks for reading, and Iâll see you guys next week with a Sealed Theros Pro Tour Qualifier report. If you see me in Toronto, feel free to say âhi!â