Login
0 Item
Advanced Search
Sign In
Create Account
âThe number-one rule about the format is that Vintage is broken as hell and there is nothing you can do about it.â
â Twenty-year Vintage veteran, Abe Corson

Vintage is unique among Magic: The Gathering formats in that (with few exceptions) every card printed is legal. Itâs also the oldest format; even before it was Type I, it was just âMagic.â As a result, there are people who have been playing Vintageâspecifically that format, to some degree of exclusivityâfor a long time. In some cases, itâs been as long as the game has been around. There are answers and counterstrategies for everything.

I'll start with my gut reaction to Mondayâs restricted-list announcement. Do I think Lodestone Golem needed restriction? No. (Do I think Chalice of the Void needed restriction last September? Also, no.) But restrictions are part of the Vintage format. The game goes on, though with slight variations. Changes keep the format fresh.

What bothers me about Golemâs restriction is that I'm not sure it was made with reason. The announcement stated: âWe continue to see an imbalanced metagame. In particular, Mishra's Workshopâbased decks continue to be significantly overrepresented, reducing the competitive metagame.â That overrepresentation is difficult to justify.

In previous years, Vintage has been a hard format to get hard numbers on because tournaments were small and few and far between. There were a limited number of big events (namely the Vintage Championship in the U.S. and Bazaar of Moxen in Europe) from which to draw results, so Wizards usually often made changes in conjunction with those.

Now, of course, Wizards can look at larger paper events as well as the complete slate of online Magic Online activities. Itâs a simple operation to take groups of decklists and aggregate their contents and results, so Wizards should have numbers available that show whatâs going on without taking into account personal bias.

TMD user Ryan Eberhart, a.k.a. diophan, put together a breakdown of the online March 2016 Power 9 Challenge showing these numbers for seventy-four players. From his post:

MTGTop8âs list of most-played cards for Vintage further suggests that Gush is more played online than Mishra's Workshop and that Mental Misstep is the most-played unrestricted card. Moreover, these cards being played in abundance arenât indicative of an overabundance of Shops since theyâre not very good against Shops strategies.

Within a few percentage points, I expect tournaments to be 50% blue (including Gush), 25% Shops, 10% Dredge, 10% combo, and 5% other, and I try to construct decks to beat that expectation. Recent event results and turnouts fall very much in line with that.

From my perspective, the Vintage restricted list should strive to be as small as possible, and any changes should be based on this kind of tournament data. As a result, any move that adds cards to the restricted list must have solid reasoning and numbers behind it. Even subjective claims like âunfunâ should have some kind of tournament-based support. There are a lot of strong voices in Vintage, and players have very different opinions of what cards are safe or unsafe, fun, or unfun. Raising the opinions of any one individual or group over others, without having other information as evidence, will invariably end up alienating some players and building suspicion that changes are made arbitrarily. Thatâs not the recipe for a healthy format.

But, what's done is done. As I said, any changes won't keep me from playing Vintage; it's a fun format, and the card pool is going to continue being large enough for people to swim in. 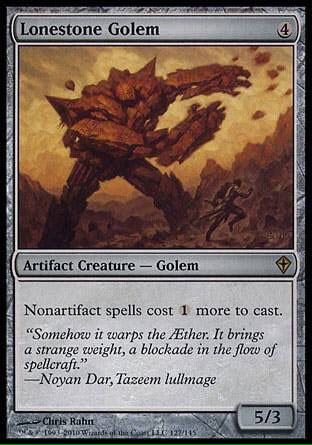 A one-of Lodestone Golem will be a significant setback for the competitiveness of Mishra's Workshopâbased decks of all kinds. Golem was almost certainly the best card in any deck that could go Mishra's Workshop, Mox on turn oneâto the point that running any fewer than four copies was almost certainly incorrect. As a hybrid of Juggernaut and Sphere of Resistance, it could easily win games on its own, slowing down blue-playing opponents and putting them on reasonably fast clocks. There are a lot of creatures in Shops decks now, so they may continue much as they are, just pairing Sphere of Resistance effects with creatures like Phyrexian Revoker, Triskelion, and Hangarback Walker.

Lodestone Golem also made Shops decks almost entirely artifact-dependent. Why try to play colored instants, sorceries, or creatures if your own deckâs best card is a significant hindrance to them? Reducing Golem to a one-of should allow colored Shops back into the mix.

One of my favorite decks of all time, Five-Color Stax, could potentially make a comeback, for example. It was pushed out of the format by more consistent Shops decks running fewer colors, but it has some powerful plays based on Goblin Welder and tutors.

Roland Chang won the 2005 Vintage Championship with a similar list, so I'm going to draw on his expertise; this list is closely based on one he played in May last year. Here, Smokestack and Tangle Wire work together to keep opponents underwater since they won't play as many permanents as the Stax list. Chang also combines tutors with Crucible of Worlds to establish Strip Mine lock, and he can use Goblin Welder and Dack Fayden to weld artifact-lock pieces and giant robots into play. Dack also combats opposing Dacks, which are such a concern that Chang includes Homeward Path in the sideboard.

I actually added the Lodestone Golem and Chalice of the Void to the main deck in my edits for this deck. If cards are restricted, they're probably good enough to make room for. The chances for blowouts are greater since opponents will fear them less and keep opening hands that canât deal with a 5/3 Sphere of Resistance or with a lot of Moxes that lose to Chalice of the Void. When I tested with similar lists, I found myself tutoring for Golem frequently.

Restricted Lodestone Golem also makes room for additional 4-drops in the main deck. Opening with Mishra's Workshop and a Mox is reasonably common, and players should be looking to take advantage of it. I'm looking for Smokestack to make a comeback and Coercive Portal to show up more often. Uba Stax could also get some looks.

This list has plenty of turn-one plays with 2, 3, or 4 mana, and a Goblin Welder opener with Bazaar of Baghdad on turn two is threatening as well. There are plenty of synergies among the different cards, and they're all pretty good:

With multiple Masks or multiple Welders, you can lock an opponent out of the game by having that player remove cards to Mask and then welding it out for something else. The removed cards are exiled forever.

What Now, Everyone Else?

Blue pilots (and Dredge pilots and combo pilots) should keep in mind that Shops decks were around before Lodestone Golem and arenât going to go away. Shops may decrease in popularity for a time and will certainly change their look, but thereâs no excuse for skimping on sideboard cards and preparation for artifact-based strategies, even in the short term. Artifacts might not interact in combat as much anymore, but theyâll still be around, making it difficult to cast spells and keep permanents in play.

That said, if people see an opening with Shops taking a hit and decide to jump to Dark Petition Storm and similar bomb-laden combo decks, blue players should be aware that a handful of counterspells wonât be enough on its own to stop them. Combo decks are built to beat counters. In addition decks based on disruption backed up with a quick clock, such as Merfolk and Hate Bears of various colors, could be worth trying since there wonât be a 5/3 behemoth standing in the way.

At the card level, without Lodestone Golem, Lightning Bolt probably loses some of its cacheâa 1-mana answer to an X/3 wonât be high priority. However, other removal, like Swords to Plowshares and Path to Exile, will still work against whatever artifact creatures do pop up as well as things like Monastery Mentor. Sudden Shock could be very good right now.

Dack Fayden also loses some allure. Stealing Lodestone Golem was an excellent play since it potentially answered two Lodestone Golems through combat or could just win the game. Stealing lock pieces like Tangle Wire and Smokestack is less exciting by comparison. Moreover, without the additional Sphere of Resistance effect, thereâs more reason and opportunity to play Jace, the Mind Sculptor as a way to control the game against lock pieces.

Hurkyl's Recall definitely becomes better in the absence of Lodestone Golem. That was the go-to artifact answer for so long because it was easy to sit behind lands and cheap counters as your opponent built walls of noncreature artifacts. When the time came, you would resolve an end-of-turn Hurkyl's Recall, escape the prison, and win the game on your next turn. Now that Shops doesnât have an easy-to-play disruptive beater, blue decks might be able to go back to that plan.

So the first creature since Ali from Cairo has been restricted in Vintage, and the format will be in a realignment state for a while. Iâll be looking forward to seeing what decks and strategies develop as players adjust to Lodestone Golemâs restriction. (Thanks to @TogoresMtg for the Lonestone Golem edit!)