Login
0 Item
Advanced Search
Sign In
Create Account
Disclaimer: Wizards of the Coast occasionally pay me to do coverage for them at major events. This is amazing to me, and I hope they continue to do so. Wizards also very kindly invited me to participate in the Magic Online Community Cup in 2012. I had a large, valuable Magic Online collection up until I sold it in 2014. I continue to draft, but I redeem any product as soon as economically viable.

The Pack Is King

To understand why the Magic Online economy is the way it is, you need to adopt the Wizards mindset that The Pack Is King.

The pack is the primary, fundamental, key vehicle (I cannot stress enough how important this fact is, so please check a thesaurus and add another twenty or so adjectives) for Magic sales.

The pack has driven the sales of Magic since its inception and has been the foundation of Magic's success.

Selling packs is the core principle of the Magic business model.

Selling packs has been a successful core principle of the Magic business model for almost twenty-five years.

And it is this successful, more-than-twenty-year-old, proven business model that Magic Online is based upon.

The ability for players to redeem digital cards in paper, much like paper's Reserved List, has both been key to Magic Onlineâs success and its curse.

There is a clear funnel of Hearthstone investment:

Magic Duels is even simpler. The original games had an initial buy-in with a basic play-to-unlock model. The latest game, Duels Origins, uses a model much more aligned to Hearthstone: free to download, with the gold grind used to unlock further cards. However, in every Duels game, no one expects to build a full Magic collection in a single Duels game, but to play and discard each subsequent iteration.

Alternatively, the Magic Online funnel is anything but clear. 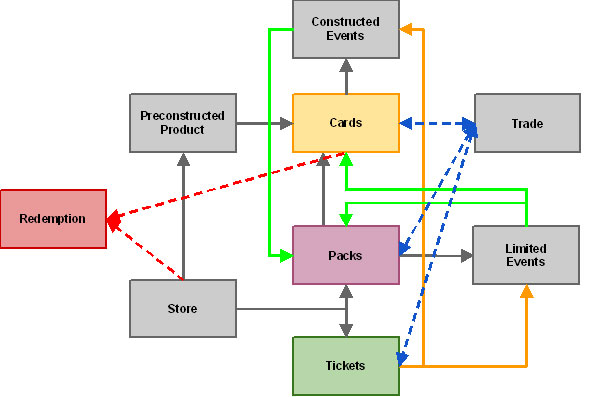 Anyone can own every Hearthstone card for freeâjust as long as that person invests enough time, rather than money. As this time overhead is generally too high for someone not dedicating his or her very soul to Hearthstone, most people recognize that, to acquire a card quickly, you're best off trying to âcrackâ it by opening enough packs. Thus, the Hearthstone store offers bulk pack purchases to encourage people to crack packs. Packs are only good for one thing on Hearthstoneâcrackingâso this is what people do to quickly find the cards required to build a competitive Constructed deck.

Hearthstone's structure is focused on getting people to build collections in order to play Constructed. Collecting is encouraged through playing large amounts of paid (via gold or cash) arena. Constructed play is incentivized by Constructed ranking, which is not available through arena play. This is different from Magic Online, in which there are (generally) Limited specialists and Constructed specialists, albeit with some crossover. Itâs also different to Duels, where card pool is locked, essentially ground out through set play, and available to anyone who does so.

As Hearthstone does not allow players to trade cards or packs between each other, the economy is one-wayâfrom the player to Blizzard. This is the diametric opposite to Magic Online, in which players, Wizards, and bot owners (effectively online stores) share a communal economy of packs, cards, and tickets. This makes the Magic Online economy dramatically more complicated than hearthstone, and the economic drivers, levers, and equilibrium a lot more unstable. Additionally, Hearthstone arena awards prizes in a seemingly random mix of packs, dust, gold, and single cards, whereas Magic Online rewards are predictable in terms of expected value (EV).

Wizards could be sitting on an unrealized fortune from the radical expansion of its player base through the reduction of the cost of entry (which could be particularly explosive if married with reducing the user interface barriers to entry), as proved by Hearthstoneâs fantastically fast take-up. But proving this would require two things: killing the idea that The Pack Is King and killing redemption.

Killing redemption is the half-likely to garner the most resistance or reaction from the Magic Online player base. Certainly, bot owners who use redemption to arbitrage between Magic Online prices and paper will complain the loudest. Those building collectionsâespecially for Commander, Legacy, or Vintageâhave already committed to investing in cards they can never redeem and are comfortable with the disparity between Magic Online and paper prices in those areas (take, for instance, the digital and paper gulf between Bazaar of Baghdad). However, they will still be able to trade for cards with other collectors, and Limited players, and the Magic Online economy, will continue. Iâll admit it is likely that the bottom would completely fall out of Limited trash.

An alternate model to redemption is entirely possible. Perhaps a buy-back model in exchange for play points by Wizards, or a Hearthstone âdustâ equivalent, would allow Limited players to claw back some of the EV of Drafts and provide an economic level to continue to take cards out of the Magic Online economy. Most importantly, killing redemption allows Wizards to quickly find a new price point for Drafts. As long as equilibrium between Draft EV and Constructed EV is found, any price that continues to provide a profit to Wizards is possible.

All this flies directly against one key fact: The Pack Is King. âThe Pack Is King No Longerâ will never survive Wizards resistance. And that, of course, is the Shakespearean rub. As long as Wizards focuses on pushing packs, rather than seeing Magic Online as an alternate profit model through the sale of tickets/play points/gold/whatever, it will never be able to innovate and compete against the up-and-comers.

Wizards makes a healthy profit on paper Magic; the only overhead that Magic Online should cost Wizards is for IT infrastructure and bandwidth, paper-to-digital programming and artwork conversion, and QA/QCâinsignificant when compared with taking a paper set through design, development, and testing. Iâd guess, even at $1, Wizards would make an incredibly healthy profit selling a digital pack. But if Wizards decided to sell play points, and only play points, and let players earn collections through Magic Online play, much in the way Hearthstone does, you could only speculate at this point how profitable this would be. Would players play four times as many Drafts if drafting cost four times less? At some point, the investment time it takes to actually play a round of Magic on Magic Online would need to be improved before the modeling would work. A subscription-style model, wherein players pay to have access to all cards immediately and then pay small, additional payments to participate in events, would, I suspect, also be attractive to a broad range of players. These economic models, and others, become possible once pushing packs is no longer the prime directive. There is a lot of area to be explored here.

Butâ.â.â.âThe Pack Is King. Wizards is unlikely to move from this foundational philosophy any time soon. Redemption is the foundation of pack prices on Magic Online, both the reason the economy ticks along and the reason innovation in pay-to-play models is stifled. For true change to occur on Magic Online, both these foundation stones need to be destroyed, and that is unlikely to happen any time soon.