Following PAX east, a new mystery appeared for the Magic community to unravel, as a video from the PAX East panel appeared showing a new Dack Fayden art as well as a strange image flashed at the end. 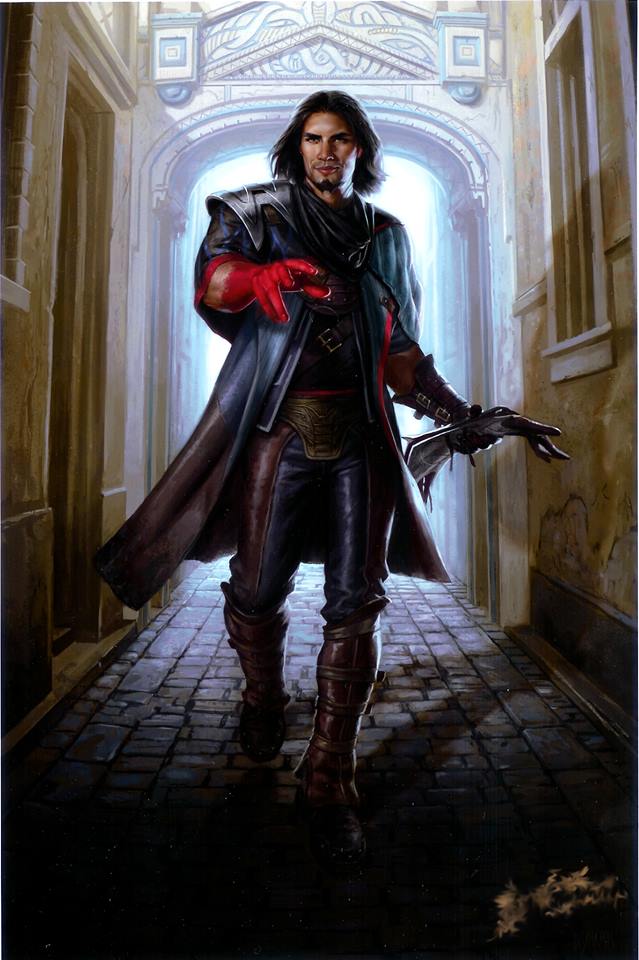 In discussions ongoing both in MTGsalvation and the Magic subreddit, the image was found to be a QR code, which had to be converted to black and white before it could be scanned. That QR code was found to leave to a twitter account.

Several tweets from this account are cryptograms, and there also seems to be some puzzle at work with the images on the account.

@Zomziu Have you gotten a close look at this yet? http://t.co/WZpNL5B22g

The image in the above tweet has a text file embedded inside of it, as well as a .jpg embedded inside. Opening the file in different ways brought different results, until someone got this image to display:

Both twitter accounts have been tweeting encrypted messages back and forth, and Elavals updated their twitter cover image to a picture with strange colored lines at the top left.

After trying several things on the "bar code", it was discovered to be a message written in morse code, eventually translated to: ANNOUNCING CONSPIRACY UUDDLRLRBAENTER.

At the set announcement arcana for Conspiracy, if someone enters "The Konami Code" as listed above, the Dack Fayden art appears, and at the bottom of the art frame, his casting cost 1UR and some other encryptions appear. The other encrypted text translates to "Art by Eric Deschamps" and "Some call me a thief. I prefer to think of myself as a discreet borrower.".

Dack Fayden's inclusion in Conspiracy allows him to be more powerful than the average planeswalker, as the card will only be legal in Legacy, Vintage, and EDH. Due to the multiplayer nature of Conspiracy, we can expect his abilities to also play into that to some degree.

This situation is still ongoing, so as more information is revealed, this article will be updated accordingly.