Here are the Standard decks for the Top 16 at Pro Tour: Gatecrash. Well, there are really only fifteen, as I did not have access to Tomek Pedrakowskiâs sixteenth place list in time to include it in this article. I determined the average mana cost of the main deck and prices in dollars and Magic Online tickets by importing each decklist into the Decked Builder app. Dollars are from CoolStuffInc.com, and tickets are from MTGOTraders.com. The graphs display the strategies, colors, and most played archetypes of the Top 16. 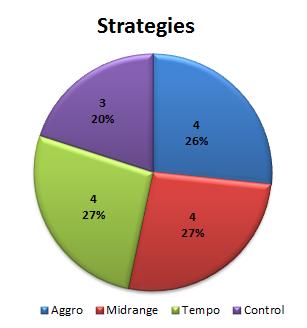 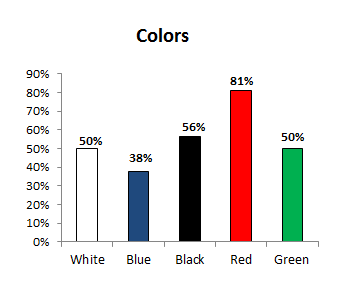 Pro Tour: Gatecrash was won by a new deck on the Standard scene: The Aristocrats, piloted by Tom Martell. Letâs take a look.

This deck plays twenty-one Humans in the main deck, allowing for the very aggressive turn-one Champion of the Parish line of play. Later, these Humans serve as worthy sacrifices to Falkenrath Aristocrat to give it +1/+1 counters. Silverblade Paladin makes both Champion of the Parish and Falkenrath Aristocrat better. A 4/1 flying with double strike can end the game quickly.

Skirsdag High Priest in a deck with thirty creatures and two copies of Lingering Souls creates a strong possibility of 5/5 flying Demon tokens hitting the battlefield as early as turn three. It is a must-remove creature for an opponent.

Joel Larsson piloted the latest evolution of the R/W/U Flash deck to second place. The deck adds the popular Gatecrash aggressor Boros Reckoner to the mix, which creates a couple of flashy interactions. You can cast Blasphemous Act with Boros Reckoner on the battlefield and Fork 13 damage your opponentâs way.

If you grant Boros Reckoner lifelink with Moment of Heroism or Azorius Charm and make it indestructible with Boros Charm, any damage done to him can lead to an arbitrarily high life total. The Reckoner can target himself to take the damage again and again and gain life for you each timeâas if there werenât enough reasons not to block that guy already.

The main innovation in this deck is the inclusion of two copies of Planar Cleansing in the main deck to help manage opposing planeswalkers. Ben Stark goes into much more detail on the deck in this video deck tech.

This Bant control deck does what youâd expect: play high-value creatures such as Thragtusk, plenty of removal, some counters, and, of course, Sphinx's Revelation to buy time and draw cards. Kessig Wolf Run takes advantage of the huge amounts of mana the deck is able to produce and turns any creature into a finisher. Check out this video deck tech for more info on DeToraâs deck.

This deck is very similar to Joel Larssons, and Thompson also included a combo-kill option. He included Thought Scour, to build up his graveyard, and a single copy of Harvest Pyre to deal massive damage to his opponent through Boros Reckoner. Snapcaster Mage helps ensure that the Harvest Pyre is available even if it is milled earlier in the game. A benefit of this plan over Blasphemous Act is that Thompson does not have to remove an opposing Boros Reckoner before casting his finisher. Check out this video deck tech to hear more about his deck.

Mono-black fans (close enough) and rogue deck enthusiasts rejoice, as Conley Woods got his brew on for Pro Tour: Gatecrash. The idea of this deck is pretty simple: Hard-cast Griselbrand as early as turn five with the help of Crypt Ghast, and start swinging. Mutilate is the deckâs sweeper and has the benefit of ignoring indestructibility. Hear more from Conley in this video deck tech.

Now letâs take a look at the most-played creatures and removal spells in the Standard decks of the Top 16. 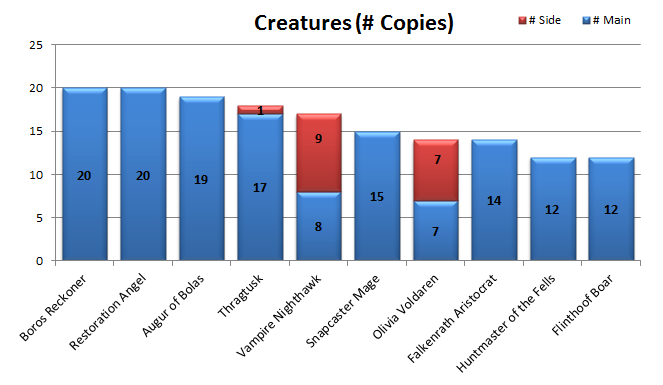 Boros Reckoner was played in five of the top sixteen decks: all three R/W/U tempo, The Aristocrats, and the Saito Naya deck. The Minotaur Wizard is running away with Rookie of the Expansion honors for Gatecrash because it is an aggressive attacker and solid blockerâcreates blocking issues for an opponent due to the possibility of first strikeâdeals damage to an opponent or creature even when blocked, and enables some powerful card interactions as discussed earlier. Reckoner is also a solid answer another card on this list: Thragtusk.

Restoration Angel was played in seven decks, the most of any creature: all four R/W/U tempo, Bant control, Esper control, and The Aristocrats.

Also of note, Gloom Surgeon was played by mono-black control (four copies main) and Esper control (three copies in the sideboard). 2 power is enough to kill most early aggressive creatures, and an aggro player will have to use a removal spell to get it out of the way, which is mana that cannot be used to improve the playerâs board position. 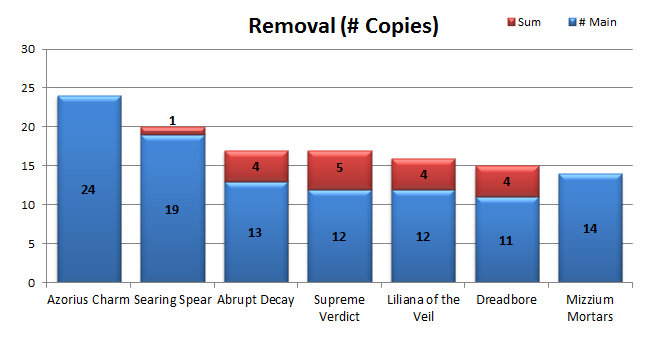 Each of the six decks in the Top 16 that played blue also played four copies of Azorius Charm. Putting an opponentâs attacking creature on top of his library allows tempo and control decks to mitigate damage and buy time to make land drops and draw more answers. It is also an answer for Boros Reckoner that does not deal damage.

There are far fewer Searing Spears played at Pro Tour: Gatecrash than at recent StarCityGames Opens. It isnât the best option to remove a Boros Reckoner and will frequently set up a two-for-one in favor of your opponent. It can finish off an opponent and handles most other creatures fine, however, so it was still played in five decks: all four R/W/U tempo and both Jund aggro decks.

Also of note, two copies of Pacifism were played in the Saito Naya deckâs sideboard. This enchantment is a reasonable spell to mitigate Boros Reckoner for a deck that does not have access to black mana for a kill effect.

What Do You Think? Vegas Aristocrats

That wraps up this weekâs column on Pro Tour: Gatecrash. Thanks for reading!