A couple weeks ago on Twitter, Mark Rosewater posted this frame to his ongoing âTales from the Pitâ series:

âWeaponize the poniesâ became the buzzphrase of the week, as My Little Pony and Transformers are two of the hottest kidsâ brands ever and helped hotwire the gray matter of many a 1980s brat. But trot down memory lane aside, as a champion of Vorthos interests, I have to take issue with this comicâs implication that there is some need, in any world, to weaponize ponies. To the Magic Design Teamâand whomever else it may concern (namely, everyone)âweaponized ponies already exist!

Theyâre called unicorns. And only one would be needed to take down Optimus Prime.

I smite theeâand curse you to an existence as the brand ambassador for an energy drink.

Magic is a barren wasteland in terms of equine life in general, but the unicorn situation is the primary offender. This creature, one of the most iconic and enduring in all of fantasydom, gets only ten dedicated cards in the history of MtG (eleven, if you count Feast of the Unicorn, which should have never happenedâfor shame!).

There are twenty-two rats cards in Magic. (Aside: searching âratsâ also brings up âbureaucrats,â heh, heh.) Sure, you can say ârats are prolific, unicorns are scarce, makes rational sense,â but then you might as well say that there should be thousands of rat cards to a handful of human cards, or that Magic should be made up mostly of blue-green-algae cards. Prevalence in cards is predicated on a number of things, obviously, but one of them should definitely be class. Unicorns are in the highest class of fantasy beasts, and in addition, they have it. In a world of Exarchs and Chris Browns, unicorns are some classy *$#%!-*$#%!ers.

Perhaps because this game was originally geared toward fourteen-year-old boys, lovely creatures like the unicorn have been overlooked and consistently underpowered. Does Timmy want to swing with a big, fat, positively obese unicorn? Does Spike want to smash the Open series with Horn-blade? Maybe not, but any rainbow-blooded Vorthos would appreciate an improved representation of these truly mythical denizens.

In addition, an increased Unitosterone level in the game would likely (in general) be attractive to members of Titus Chalkâs fabled Lost Tribeâwomen, girl gamers, females, members of the âfairerâ sex, good/bad girls, Magic moms, cool girlfriends, etc. (Aside: Of course, many women love bashing with dragons, Valakut, burn, and hawks as much as we appreciate a finely wrought horn on a cute horsie. And many fellas love stuffed Myr.) The fact of the matter is, the addition of some awesome unicorns wouldnât hurt. It could only make things better.

Letâs look at the current pantheon of Magic unicorns.

Lovely and distinctive art by Quinton Hoover (how would that look painted on some black velvet, eh?? With a glass of cognac in handâclassy!). Otherwise, not much else happening. Feeling creative or already a unicorn junkie? Send me your deck list that features Adarkar Uni and I will post it.

David A. Cherryâs rendition has the feel of a storybook illustration, and depicts a classic-looking uni. The ability? Flavorwise, speaks to the âprotectionistâ powers historically attributed to unicorns, but compared to Stoneforge Mystic, well, poor B doesnât stand a chance against a Batterskull.

The ability is a bit more applicable, and Jerry Tiritilliâs art, as art, is beautiful. However, what unicorn ever needed armor to ride into battle? Makes me suspicious (along with the curved horn and yellow mane) that Capashenâs unis arenât really, theyâre just white geldings tricked out in fancy battle gear meant to inspire awe and hesitation in the enemy.

Cornelius Brudiâs original Pearled has such great movement and unique style that I have to love it despite the black mane/tail, and Cherryâs is another classic vision. Thereâs even a rainbow in the background. I love both concepts and the brilliant quoting of Lewis Carroll. But the name doesnât give us much flavor, other than that itâs pearly-vanilla.

This guyâs ability gets me a little excited. The five or so people whoâve read my blog will know that my Johnny starts to chatter when I see Prized; Basilisk Collar, Grafted Exoskeleton, you name it. I think Sam Woodâs art is appealing on the battlefield, but the eyes are a bit demonic and that horn .

Interestingly, Regal and Pearled seem to have some kind of infighting going on, with Regalâs flavor text being basically a *$#%!-slap of the aforementioned Lewis Carroll quote. I dislike the inherent cattiness of this reference, as unicorns are never catty. Zina Saunderâs unicorn looks bratty enough to have said it, though; maybe sheâs a bit too high-horsed over her bigger butt!

This is my least favorite of Cherryâs unicorns, because itâs got that odd yellow mane and tail and its stance looks angular; it reminds me of a chess piece. Not worth the cumulative upkeep by todayâs standards, and I donât think the upkeep cost very flavorful. But the flavor text is quite nice.

I really enjoy the pathos in Carl Critchlowâs work here. The added bonus is that Ronom actually has a pretty sweet ability, that somewhat makes sense from a flavor standpoint (though personally I think a unicorn could blast as many artifacts as it wanted, without saccing itself). In any case: take that, Optimus Prime! Neigh!!! 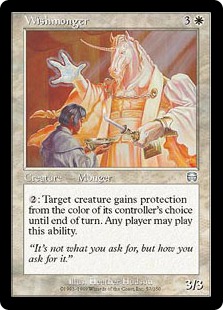 Okay, now weâre getting into the ugly your creature type This guy is freaky as hell and I canât even look at the artâthat hand!âwithout cringing. Iâm going to have to have faith that this is some kind of interloper and design did not intend this to be a real unicorn. His redeeming quality is that his ability would actually make for some Commander fun. Maybe he could hang out with this long-legged gal:

Letâs hope they donât hit it off too well. Those would be some fuuunky kids. (Aside to Art Direction: That is a boobie on a goat. A humanoid boobie. On a goat. Couldâve used another spin cycle.)

Last (and least) we come to the unfortunate Zebra Unicorn. Now that weâre into the unicorn equivalent of Area 51, where all the freakies live, we might as well also point out that Zebra has the smallest horn of the bunch. Itâs disproportionately tiny. Itâs absurdly needle-like. Weâre sorry. Heâs not the worst in terms of ability, but the song quoted in the text isnât doing it for me, and overall I feel we have an epic fail on our hooves.

This is a serious, ardent plea for elevating the state of the unicorn in Magic. The above list is glaringly lacking in oomph. If a flying purple hippo can be the Magic equivalent of Mick Jagger, a unicorn should at least be able to sing Umbrella.

Women are not the âmythical unicornsâ of Magic. Unicorns are the mythical unicorns of Magic. Letâs give this sorely neglected race the upgrade it deserves. How about a unicorn planeswalker? Or unicorns that take on some of the angelsâ duties (like Linvalaâs)? Heck, if they need flying, give âem wings and go bonkers with Pega-corns or Unisuses or whatever. There can be dark unicorns aligned with black, red wrathful unicorns, even unicorn seahorses for blue. There are endless possibilities and no excuses for not exploring them.

An iconic image of beauty, honor, and power that withstands the test of time and captivates little girlsâ (and boysâ) imaginations everywhere deserves a few wicked-good cards. Is that too much to ask?

Neigh, we think not.