Recently, the Street Fighter Secret Lair (aptly titled "Secret Lair x Street Fighter") was announced and boy was it exciting. For how hostile people were toward The Walking Dead and the medium overall reception of Stranger Things, people all over Twitter seemed to be thrilled and excited for this set of cards to come out. All eight main cards represent the original cast of Street Fighter II: The World Warrior. It's so cool to see them all in one spot like this - especially when every one of them seemed to get a really awesome card that is very flavorful to their characters in the game. 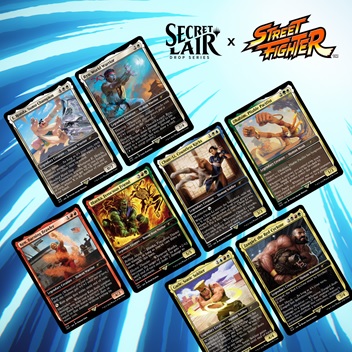 Personally, I missed a lot of the original Street Fighter hype when the series first started. As a kid in the 90s, I was far too young when the original Street Fighter II came out to play it. My earliest experiences with fighting games were either the Mighty Morphin' Power Rangers game on the Sega Genesis or watching my cousin play one of the Mortal Kombat games. While I came to have a very slight understanding of who the game's characters were, I don't think I played with them for the first time until I played either X-Men vs. Street Fighter or Marvel vs. Capcom at a local mall in Buffalo. Even then, the times I'd play with these characters and these games were far and few between.

In recent years, though, I've really dived a lot deeper into old school gaming more and more and the history of the various consoles, genres, and the medium as a whole. I've had an interest in these classic games for as long as I can remember, with my parents purchasing a Sega Genesis before I could even walk. As such, it seemed like a fun thing to get much more into in the last couple of years where I can't, you know, go anywhere.

One of the first things that got me back into this hobby was actually the Netflix series High Score, which had an episode that largely featured Street Fighter II and walked through its history and impact on video games as a whole. Soon after I was doing things like watching retro game content, speedruns, and checking out old video game music and it was there I'd stumble onto the incredible Guile theme, an absolute banger. Seriously, it goes with everything and in fact I've been listening to a 10 hour loop of it on YouTube as I write this and honestly it's just fantastic.

All these factors led me to eventually pick up a copy of Super Street Fighter II for my Genesis almost thirty years after its initial release. It was fantastic, and my first choice of character? Guile, of course! I wanted to jam to that rockin' theme, after all, even if it was only on one level, really. Didn't matter. It was fantastic and worth it. So naturally, I was stoked to see how he'd play when his card's art was previewed and I wanted to see if I could make a deck around him, hopefully playing his theme the whole time I did.

Suffice it to say I was a little medium on the card, but still thrilled to work with it and see what I could do to make Guile function well. Let's check out a list!

The main problem I faced putting together a list for Guile is that, frankly, the card isn't the most exciting to play with as a Commander - as previously mentioned. Looking at virtually every other card in this Secret Lair, it's almost like he's the most fair of the bunch. Yes, it's really cool from a flavor perspective, but when you see the awesome and unique things all the other cards are doing, it's easy to feel a little disappointed. Still, I thought he was pretty cool as an attacker so I sought to do two things:

The second part was pretty easy. I've covered a lot of equipment decks before, and it's not much different here. I did try to think of some slightly more flavorful effects or equipment to work here, but there is only so far I could take it (Captain's Claws felt particularly sensible for something you'd see in a fighting game). So, then I looked at charge counters and that too was a bit of a mixed bag. There are a decent amount of proliferate effects to keep Guile charged up with counters continuously, but there really weren't a lot of ways to give dedicated charge counters without doing something like making him into an artifact.

The next thing I looked at here were soldiers. Guile himself is a soldier and I thought it would be fitting to kinda be able to give him an army of sorts. So, I cards like a couple Elspeths, Hero of Bladehold, Daru Warchief, Field Marshal, and Mobilization. The problem was I didn't feel like I was hitting strong enough synergy, but what I got was good enough to keep the whole package in here as most of the cards still work individually within the deck. Some of them - namely the walkers and Assemble the Legion - actually get really good when you add proliferate to the mix.

That set up a good chunk of my non-lands so then I just needed to figure out how to round out the deck. I added some counter spells since in fighting games you can counter an opponent's attack, added in some additional combat phase effects to get in extra damage, and then filled it out with general good Commander spells. You know, your Swords to Plowshares, Return to Dust, etc. I did also throw in a nice Silent Arbiter into the list since even though it can be a bit non-synergistic with your token armies it basically makes 1-on-1 battles like you'd see in a fighting game like Street Fighter.

The result is a deck that's a little bit of a mish-mash but at the same time feels very much like its own unique thing. I love that in Commander, though, and when it works it can work really well. Guile's really cool, even if his card looks a little weak at first, and deserves your time as much as any of the other excellent legends in the Street Fighter Secret Lair. The cards might not be hitting your mailbox anytime soon, but you should definitely give Guile a try at your Commander nights when it shows up.

Now go home and be a family person!