Originally, I had planned to sit down and take a bit of time to spend with Advanced Jumpstart discussion and - as mentioned in my previous article - intended for my next piece to be about zombies. They're cool, slow, moaning and groaning brain junkies and I love them for it. But then soon after my vampires Advanced Jumpstart article dropped, a curious little tidbit showed up in the weekly MTG Arena announcements on December 1st.

As the note implies, there was something big cooking up, but no one knew what it was yet. My mind jumped to some of the obvious things. The most notable part was that it was something incoming for the version update that was dropping in a little over a week, meaning that it was something that could be announced and implemented right away. This told me it probably couldn't be a new Historic Anthology or Historic Horizons-style release because of the lead-up time those releases had. My mind jumped to one of three things: increased Pioneer support, spectator mode, or multiplayer support.

Then Wizards announced that we'd be joined by Dave Humphreys from the Magic design studio - basically the current term for R&D. With this in mind, I basically scratched off spectator mode, cuz they probably wouldn't need R&D for that. Same with multiplayer support, leaving only Pioneer. But that didn't make sense either unless they were doing something like dropping the remaining sets all at once - something that seemed tremendously unlikely.

So, I waited, as many did, for the weekly stream to come on and for the announcement to start. Then it came like a bombshell: Alchemy. 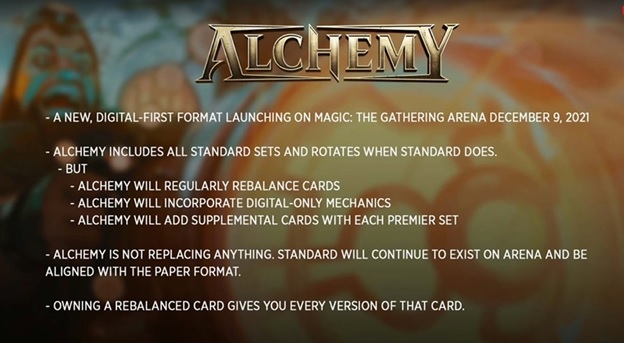 Alchemy is an all-new format designed around really playing with the concept of being a digital game. Remember the Mirror, Mirror event where they digitally tweaked and nerfed powerful cards to bring them down to a playable level? They basically took that event and made it an entire format where they can change powerful - and dare I say broken - cards and bring them down to a more acceptable level. This allows for an alternate Standard to now exist on the MTG Arena client.

Wait, that sounds kind of familiar... 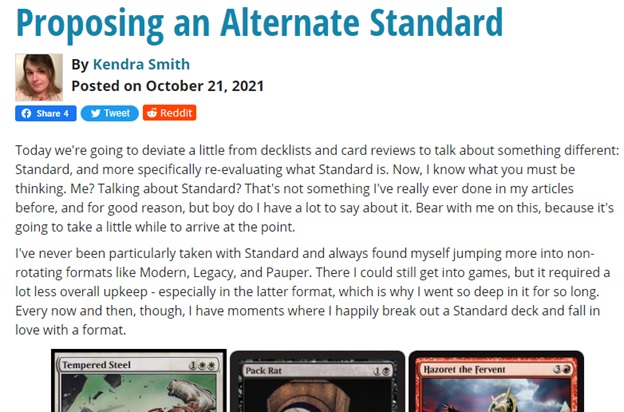 Oh, yeah, that's probably because I wrote a whole article about the very concept a little over a month ago now! Sometimes vindication feels great.

The idea was simple: Standard is a cool format but gets solved too quickly and people get tired of it fast. The increasingly numerous and accurate data points have also led to this happening faster than ever. On top of that, individual card designs were simply pushed a little too far, causing continual balance issues. A lot of people were excited to see rotation happen and for Throne of Eldraine to go away, only to get stuck with what's basically a dull three deck format at the moment. This led to a lot of complaining and people worried that this would just go on and on.

There was this idea of making an alternate Standard queue. Something that could be toyed with and used to give players a different way to play the format while also exploring new ways to rework how the format plays in paper. Basically, use it as a testing ground while giving players a format that's a little fresh if they want something different.

Alchemy ends up essentially filling this role, though not quite in the way I had wanted. I was hoping for Wizards to try out different rotation methods because that was something you could translate to paper as well if it worked out. Instead, we got a digital-only format involving cards uniquely changed and nerfed within the client. And not only would these cards be changed in this alternate Standard environment, but they'd be changed for Historic as well, since that format is also a digital-only format.

If this concept sounds familiar to you, it should. Hearthstone has been playing with this idea for years, so instead of banning problematic cards, they just tweak them to make them more acceptable in their respective formats. I know the common meme is that "we're Hearthstone now," and I guess there's some amount of truth to that, but plenty of other digital card games have done it as well. It makes sense, honestly, since it lets people keep playing with cards and keeps things fresh, so it seemed like it was only a matter of time until it came to Arena as well.

In addition, we're also getting a whole host of new cards, like these: 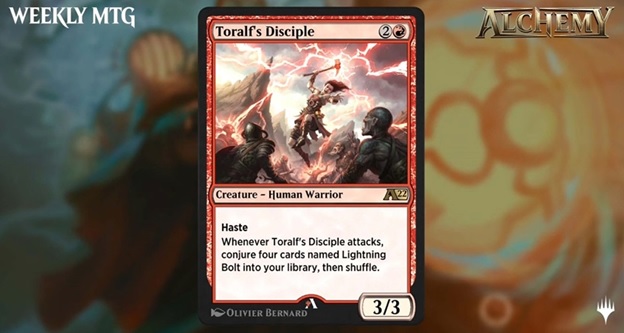 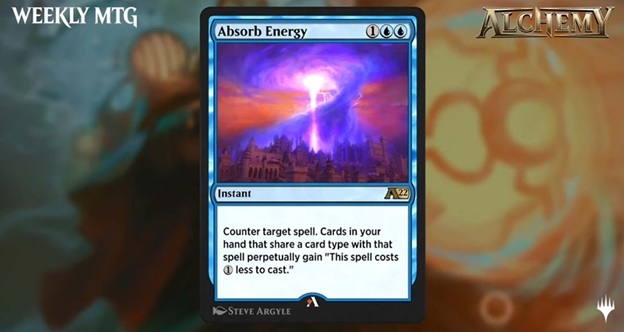 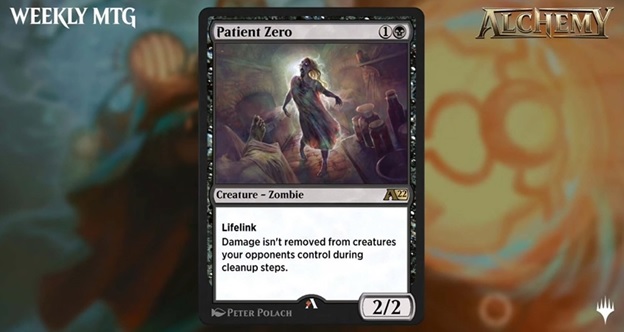 Some of them are more "digital only" than others, but the ones that can be done just fine in paper are simply better online. A good example of this is Patient Zero, which is basically Pokemon's damage counters (until the card gets removed) and can be easily represented by dice. The problem is that these can be tough to manage with tons of creatures on a board, and they can be tough to track in combination with actual counters. There's also a land - Forsaken Crossroads - that comes in untapped if you went second. Not hard to track at first glance, but I know I've definitely had times where I go, "wait, what game is it again?" Mental fatigue in long events is real and it could pose issues in a game that ends up going long.

What happens is we get some really sweet fresh designs on top of some power adjusted cards. Seems pretty cool, but then there's the concerns players tend to raise as well. There's a continual worry that the divide between paper and digital Magic is getting too large, and there's a fear that paper will be completely overtaken by digital soon enough. While there's no doubt that digital's presence is growing, it's clear WotC wants paper to thrive as well and so while I understand the concerns, I also feel like this is just going to be its own thing and that'll be that.

This does lead to another interesting question though: is this good or is it bad for Magic? After all, a precedent for something like this has never really existed before. Card erratas have been extremely rare and - apart from a few notable exceptions like Time Vault and Oubliette - were never really major changes. Well, that is until the complete overhaul of the companion mechanic in 2020. That ended up going over pretty well for the most part, and may have actually been a reason why they tried this out for Arena. 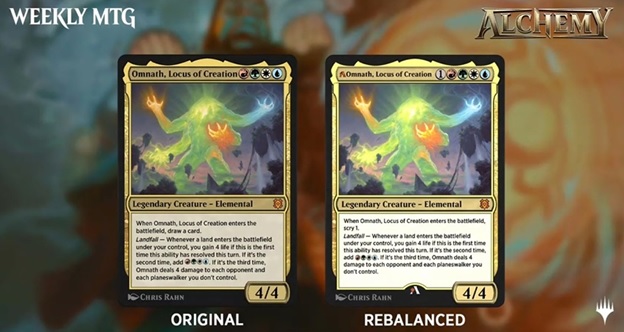 In any case, we've never really seen something this major so it's hard to say what'll happen. Is it good? Is it bad? Who knows? There're certainly some issues with it, but they're minor. Let's say you pull up an article on Alchemy or a decklist for that format and Alrund's Epiphany or Omnath, Locus of Creation gets brought up. You'll see the original card and not the new one, which can cause confusion as to what the cards do. The same goes for someone playing a deck in Alchemy for a while and then going and playing a paper Standard event where their cards do different things than online. Ultimately, I think it's a minor logistical headache but I think as players start to play these different formats and see these different card versions, they'll grow more accustomed to what is what.

They're also not just taking out the trash by nerfing cards with their rebalancing attempts. Wizards is giving some less powerful cards upgrades! This can give cards new opportunities to shine and breathe some fresh life to a format in a different way. Here's an example of what I mean: 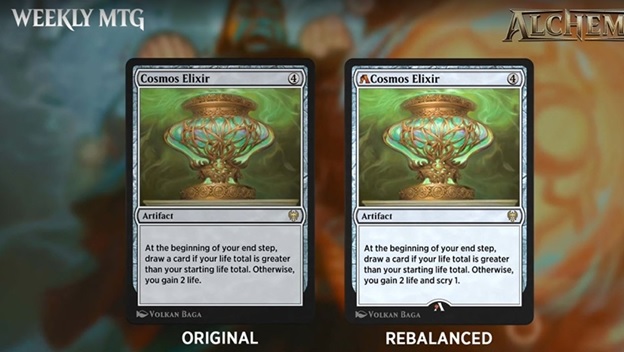 Cosmos Elixir was always a cool little card that just really never did enough. Adding the scry to some life gain is pretty solid and gives it a bit more oomph that can really turn the tide of a game by making sure you don't get stuck with bad draws. It's not perfect and four mana is still a lot to be paying for a card like this, but it's a good direction to be taking. In fact, I'd rather see more changes like this than I would nerfs. Give those mediocre cards a shot at glory!

The other concern I heard a lot is, well, what about Pioneer? Wizards has been talking about trying to get Pioneer on the client for years, and with the focus on Historic and more digital-only formats, you have to wonder if they've dropped it or are still working on it. As it turns out, it's still in the works, the priorities just got changed around. Wizards stated on the Weekly Magic Stream that essentially Pioneer would take several years to get online while Alchemy could happen in about one year. As such, they opted to get Alchemy and digital-only cards online first to give the client a little more variety as quickly as they could. So basically, Pioneer is still coming, it's just a bit further away.

Ultimately, though, what's surprised me is how tame the discourse has been this time around. There's often a lot of people who will spring to call WotC on bad calls. While there sure were here - especially in the Weekly Stream's chat - things seemed much milder on the likes of Twitter and such. Most players seemed to either be excited or gave a resounding "meh, not for me, have fun with it," with few people being incensed by it. That gives me a little hope for this, and with any luck it'll go over better than any of us could have possibly expected.

At the end of the day, I think this is simply a new chapter for Magic and is going to just be another way to play. I know I'll try it a little, but I think my heart is still going to lie with the more stable non-rotating formats I already know and love. And that's the crux of it: if you don't like it, then you don't have to play it. But there's a lot of people who are also thrilled and excited for Alchemy and digital-only forms of Magic. It's a diverse game with tons of cool ways to play. We've already had formats that are more or less only possible on Magic Online (Penny Dreadful) and some that are only possible in paper (Old School and Premodern) so what's one more?

All in all, I think it'll be a great way to spice things up, and a way to give people bored with what Arena currently has to offer a new way to play. I'm wary of what it means long-term, but cautiously optimistic at the same time. What do you think of the format? Are you going to play it? Do you think the digital-only cards and rebalances are fine, or is this just going to be the latest thing that kills Magic? Whatever the case, I look forward to a bright future ahead for the best game in the world. I can't wait to see where things go from here.