This past Saturday I had the pleasure of head judging the last Pro Tour Qualifier of 2009. We had a seven round event that ran just under nine hours, which includes the untimed top eight. There was considerably more staff for the PTQ than there had been the previous week at the state championships but strangely I think I'm fine with that outcome. A slightly over staffed event allows for an opportunity for less experienced judges to be shadowed by more experienced judges and lets us have a more robust side events schedule.

Since I've noted that this was the final PTQ of the season I should probably say a few words about the PTQs to come. Next season is Extended, as most of you know, and that can be a really difficult transition for some judges to make. Not all judges are going to know the subtle interactions between the key decks in the format, particularly newer judges or those who mainly work limited events. A good primer from the head judge can head off such problems and if you plan on judging at any events I encourage you to create such a primer if youâre familiar with the format, or at least ask your head judge if they know of any problems that might come up. These things can go a long way to making an event smooth.

Additionally, after speaking with Jeff Williams (Tournament Organizer for Florida and Georgia) we are going to be running some judge conferences in 2010. The first one will be in January and we are looking at the third week or so. The location will be Phoenix Games (in Orlando) and subsequent judge conferences will probably alternate between Phoenix and Armada Games since the majority of judges in Florida are between the Orlando and Tampa areas. If you are curious about judging or becoming a judge I encourage you to come and join us. There will be seminars on a variety of topics (popular requests include the dreaded 'layers' and casting a spell), and role playing scenarios to help judges make effective rulings. Level five Super Judge Sheldon Menery was in attendance at our last judge conference and I encourage you all to join us.

Another great opportunity on the horizon, and one particularly close to my heart, is going to be that of EDH workshops. Jeff and I have been discussing the idea of having workshops tuned toward building better EDH decks on the days following PTQs and I think it's an excellent idea. At the very least it's an opportunity to deliver a beating to some judges! EDH embodies camaraderie and Iâm not sure if anything helps build the community bonds better than a good casual game.

With that being said Iâd like to showcase a few changes to my favorite EDH deck, Progenitus. First, the list we left off with last time: 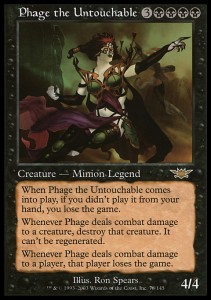 The first thing thatâs worth noting is that Phage the Untouchable is missing from the list. I had initially decided to cut her and add Proteus Staff to let me stack my deck completely. Many opponents were not too happy with me taking a while to stack my deck, even during their turns instead of my own. I eventually went back to having Phage in the deck but then ended up cutting her again for two reasons. One, people caught on and stopped aiming Bribery and Telemin Performance at me. Two, at one event a fun local player named Anthony decided he had some tech for me. Early during our casual game he played Forbidden Orchard and eventually tapped it for mana giving me a creature. Of course I fist pumped because I now had a blocker! Little did I realize that Anthony was going to Polymorph that creature to crush my dreams! Well played by Anthony, which incidentally granted him the kill in our EDH league. Phage had become something of a liability and needed to go. 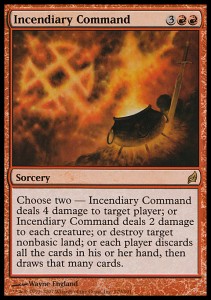 Though I made the obvious additions of the fetch lands, there are a few cards that Iâm kind of surprised I had not added earlier. Day of Judgment feels like a natural addition to the deckâs already potent removal package. In order to make room for wrath number three I cut Incendiary Command. In a duel it is amazing, destroying their best land and killing their small creatures. In multiplayer it just means I have to target one person and not impact the board much at all.

Another card that should probably have been in the deck from the beginning is Sphinx of Lost Truths. Though Bob Marley's sphinx isn't quite as popular as Sphinx of Jwar Isle he is quickly getting there. The ability to sift through three cards, or in some cases just draw three cards outright is too good to pass up. Making room for the Sphinx was fairly easy, I've cut Rampant Growth. I find that the deck already has a great number of accelerators and the extra fixing wasn't really necessary with the already great number of dual lands in the deck.

One last addition which has been sorely lacking is Enigma Sphinx. With the original creature-less build of the deck the sphinx would have been a fun addition but just didnât fit the theme. Now that we are no longer concerned with those constraints the sphinx is a perfect fit. With the addition of the sphinx another card needs to go and I think that Time Spiral has run its course. I know that there are a lot of people who will disagree, but this deck lives on card advantage and refilling your opponents hand is just too big of a liability, even if I do get to untap first.

As always there are a few neat rules nuances that we can apply here! Kicker is an additional cost you can choose to pay, meaning if you cascade into the Sphinx you can pay the kicker cost if you have the mana available to do so! That's card advantage into card advantage which is crazy! Also, Cascade is a triggered ability but multiple instances of cascade are not redundant. This means that if you have a Maelstrom Nexus out and the first spell you cast is Enigma Sphinx then you get to cascade twice! Just watch out for Double Negative. Another quick note on the Sphinx, the ability triggers if the card is put into âyourâ graveyard from play. Your always refers to the controller of the card. That is problematic if another player has somehow gained control of your sphinx. In a situation like that if the sphinx goes to the graveyard it will go to your graveyard but the trigger condition will not have been met and the sphinx gets to stay in the bin.

I hope you like the new changes to Progenitus and crush face with the deck as much as I have! Join me again in a week when we build a whole new EDH deck, from scratch! I donât want to say too much right now, but I think weâre going to try to cast everything at instant speed... just in a non-control way!

Until next time this is Ben McDole giving you a hundred reasons to play magic!