Randy Buehler, Pro Tour Hall of Fame member, as well as being an ex-VP for Wizards of the Coast and commentator on the Pro tour. His name should be known to all players for his involvement with the game. 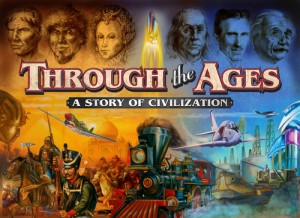 Through the Ages is a civilization building game. The goal is to develop your civilization, not to destroy other ones. Military strength is just one aspect of your nation, as well as population, production or science. It is up to you which aspect you will concentrate on, more or less, but you should not underestimate any of them while building your civilization.

Victory is achieved by the player whose nation produces the most culture during the game. However, there are many ways to produce culture: through religion, literature or drama, by building wonders, by utilizing cultural persons etc. Considerable amount of culture can be gained even via wars or aggression.