Readers of Making Magic will know of the three player psychographicsâTimmy, Johnny and Spikeâas well as the two other identities Mark Rosewater describes as being two ends of a separate scale (appreciation): Melvin and Vorthos. Today, I aim to refine that theory. 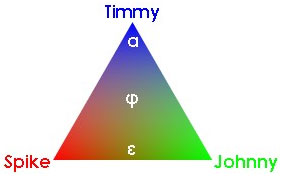 I put it to you that Melvin and Vorthos also exist on a triangle and that they share that triangle with a third reaction type: Roger. Now, there are three juicy nuggets in that sentence, so let me go through each on its own. First, I am suggesting that the Melvin-Vorthos scale is not linear and that there is a third type. Just like player psychographics, these three identities are not mutually exclusive and a player can be plotted on this triangle based on how Melvin, how Vorthos and how Roger he or she is. Second, I am suggesting that this scale does not represent player appreciation so much as reaction. Where the pyschographic types describe why a player plays Magic, the reaction types describe how a player reacts to Magic. That is, what does Magic make them want to do or think about.

Melvin likes puzzles. He is logical and often methodical and makes for a great coder, handyman or quality assurance specialist because of his ability to see how mechanical pieces fit togetherâand how they donât. He likes to think about strange rules interactions. Melvinâs reaction to a Magic card is to imagine how that card might interact with other cards to create interesting results because of the rules of the game.

Vorthos likes stories. She is imaginative and often emotional, making for a great storyteller or critic because of her ability to see where thematic pieces leadâor how they ring hollow. She likes to think about the story between the cards. Vorthosâ reaction to a Magic card is to imagine the world around it: how did it come to be; how does the character on this card feel about the magic on that other card; where could this story be leading and what other magical possibilities are possible on a world where something like this exists.

Roger likes building. He is creative and often expressive, making for a great inventor or designer because of his ability to analyze ideas and synthesize new ones from them. He likes to think about new cards or mechanics he could design. Rogerâs reaction to a Magic card is to imagine other ways it could have been designed and the kinds of worlds or gameplay that would exist in such a scenario: what if this card had flash; what if it were red instead of blue; what kind of card would play really well this one.

Hello, my name is Jay, and I am a Roger. Everyone on the Magic Design team is a Roger and everyone who applied for either Great Designer Search is a Roger. It is not enough for us to play the game, nor to think about the rules or the story: we are compelled to create.

Magic is a great game and the reason is that it compels so many different types of people. Many Magic players also like Chess. They are Melvins. I donât like Chess because itâs too abstract. Many Magic players enjoy reading the Magic novels. They are Vorthosi. Iâm not a huge fan of the novels because Iâd rather play a game than read passively. Some Magic players (I have no idea how many, possibly 1280) enjoy designing Magic cards. They are Rogers. A fair reason not to share that interest is: why should you do the work of creating this gameâparticularly when your work will probably never be published.

You may already be suspecting that there is a correlation between the psychographic types and the reaction types. I know I do. I would bet dollars to doughnuts (whatever that means) that the more Timmy you are, the more likely you are to be a Vorthos and likewise Spike to Melvin and Johnny to Roger. It makes sense. Timmy plays Magic because he enjoys the experience. He wants to be able to tell the story of the time he attacked with a 32768/32768 trampler for the win. Why would he not also enjoy reading about the time a very mortal Toshiro Umezawa battled incomprehensible, powerful spirits for his own survival or musing how many feet tall a 32768/32768 creature must be? Spike plays Magic because she enjoys winning and mastery. In order to excel in any game, particularly a game as complex as Magic, you must have an intimate understanding of the rules including bizarre interactions between unusual cards. Johnny plays Magic to express himself. That can take many forms including many expressive kinds of deckbuilding, but creativity in card design is clearly a form of expression as well.

With all that theory out of the way, Iâd like to share some practical fun with you to feed your newly recognized, inner Roger. I mentioned BYO draft briefly in my GDS Primer and I promised to tell you more about it. Now is that time. 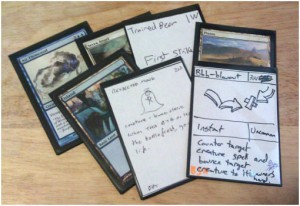 The most complete Build-Your-Own draft requires each player to design three booster packs worth of cards. I call this 360Âº draft as there will be 360 cards created if you have eight participants (and drafters like circles). This full-on version is long and intense so I strongly recommend starting with a partial BYO draft (120Âº) in which each player designs one booster pack to compliment two real booster packs. YourCards-M11-M11 is an excellent starting point because the core sets have a more malleable identity, but YourCards-Worldwake-Zendikar and YourCards-Scars-Scars are also fine options. You are not creating cards in a vacuum, but rather you are trying to match the other setsâ themes and mechanics. This context gives you a solid jumping off point and provides a design restriction that will help build your design muscles better than a free-form BYO.

After each player has designed his pack (~10 commons, 3 uncommons and 1 rare, with a reasonable distribution of colors), she will pass it to the player to her left who will then develop those cards. That is, he will look at your cards and verify that they make sense and are unambiguous as well as checking the power level to ensure that no card is so broken that it spoils the fun of the draft. He will make any changes he deems necessary to your card, though preserving your original intention should be his priority. As I have seen cards get axed entirely for just being thorougly broken or unfunâor due to rarity shiftingâit is often a good idea to submit a few extra cards. As my group cuts 9 blank cards from a single sheet, we each have 18 opportunities to design, botch and pad our submission.

Once the development phase is done, the draft is ready to begin. Pass the pack you developed to the player to your left and start drafting with the booster you are passed. The draft proceeds exactly as normal. When that booster is done, open your M11 booster (or whatever set you went with) and go the other direction. If youâre doing the hardcore 360Âº draft there would be another round of design and development here. Doing it in between rounds will allow the second and third boosters to be informed by the previous boosters.

Draft as normal. If you made the new cards on plain slips of paper, you will need to sleeve them with an existing card so that they are indistinguishable from the real cards (lands at least) that you use. Your group could collaboratively create an entire set by running 120Âº drafts iteratively. The first time, draft YourFirstSet-M11-M11. The second time, draft YourSecondSet-YourFirstSet-M11. And finally, draft YourThirdSet-YourSecondSet-YourFirstSet. To fill out the rare and uncommons slots, just continue iterating (YourFifthSet-YourFourthSet-YourThirdSet, etc) until you feel good about the cards in your set.

In addition to being good clean fun, BYO draft is an excellent way to stretch your design muscles because you will get immediate feedback on your cards. Did players draft your cards more than others? Which cards sit in a sideboard all night? Of the cards that were played, which were too complex, which were too powerful, and which were just plain fun? And since you are necessarily doing this with other players, the design and development becomes a team effort. You give and receive ideas and feedback directly.

The hard part will be finding fellow Rogers among your local play group since this exercise wonât be coming to Magic Online any time soon. Good luck, and happy designing/drafting. 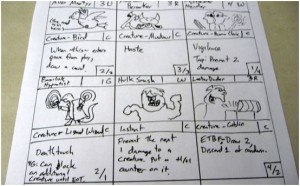 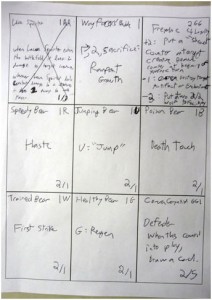 For a rather different take on BOO Draft, I strongly recommend Gavin Verheyâs The BOOtacular BOOxperience despite its name. This group clearly put a lot more time into both the pre-draft and the post-draft which, whether it is appealing or not, must at least be respected.