Bah-weep-Graaaaagnahwheepnini bong, gamers, and welcome back to another article about Transformers: TCG. This past weekend was GenCon and with it, the Transformers TCG Open! Thirty two of the best TF:TCG players fought their way through the preliminaries to battle it out against each other in a massive single-elimination tournament. In the end, one man stood victorious above the field, Kevin Allen who piloted a very impressive 4-wide cars deck to the top spot.

There's a good break-down of his deck over on YouTube, and if you're already familiar with the mechanics of the game and have been playing since the start, I highly recommend it. However, his strategy relies on access to Cliffjumper-Renegade Warrior, which is an exclusive promo card released only at the 2018 San Diego Comic Con and has since become quite hard to come by, demanding a steep price on the secondary market. So instead of just going over this winning deck as-is, I'd like to talk about building a similar deck that you can pilot without shelling out for this limited character card. 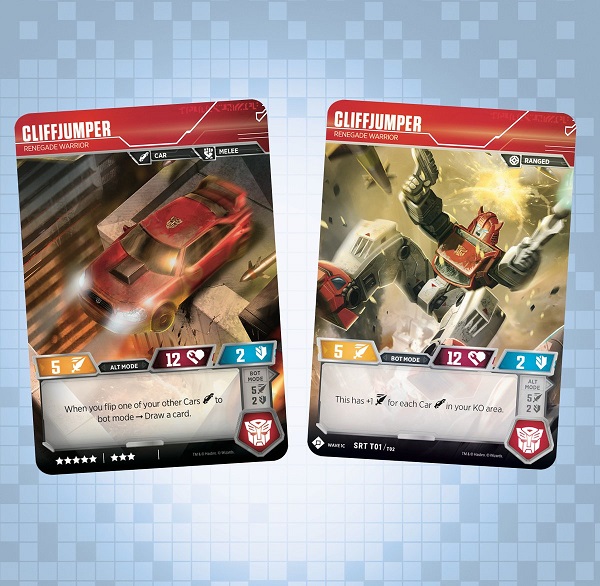 As with most Transformers TCG decks, character selection is very important. Because much of the strategy of this deck relies on cards that only work with characters who are of the Cars sub-type, we're going to want to focus on that type and select characters that give us the maximum amount of utility and power for their type. Now, Kevin Allen's selections were Cliffjumper - Renegade Warrior, Prowl - Military Strategist, Arcee - Skilled Fighter, and Red Alert - Security Chief. Since Cliffjumper isn't going to be necessarily available to everyone, my suggestion as an alternative is Private Arcee - Special Ops.

Let's look at each of these characters in detail to see what they bring to the table, and what we need to consider when building out our battle card deck to support them.

Arcee - Skilled Fighter: As the only non-car on our team, Arcee gets a special pass due to her impressive bot mode ability of having a Pierce value equal to her attack power. With only a base 1 for her attack, we're definitely going to want to build around pumping her up as high as we can before swinging in for an attack, but even if we can't fully optimize this impressive ability, we'll still be guaranteed to get some damage through against even the most defensive of blue-heavy decks. Her alt-mode ability to heal is a nice bonus, but not something that we're going to rely on heavily. Being our cheapest character at only 5 stars with two solid abilities, she's more than welcome despite not being a car.

Arcee - Special Ops: It may seem a bit weird to have two versions of Arcee on our team, but without access to the hard-to-get Cliffjumper, this Arcee is a very passable stand-in. Her alt-mode ability to Focus when going into battle will help with strategizing our combat flips, but it is her bot-mode ability that we're really looking for here. As you'll see when we get into the deck itself, we're going to be running a good number of weapons which will help to activate her Bold 1 ability. That, along with her higher than average base 5 attack value, makes her a very nice replacement for the expensive Cliffjumper. Sure, we won't be gaining quite the card advantage that Cliffjumper provides, but the idea is to make up for it with bigger swings.

Prowl - Military Strategist: Out of all our cars, Prowl is the one that we're going to be the most interested in flipping as often as we can. His alt-mode ability is crucial to this deck's ability to lay down the heavy hits with consistency. Our deck will have a few good tools to really enable some nice combos with his ability on top of some of the other character abilities we've seen so far. His ability to heal other bots when one of your cars is KO'd isn't anything to heckle at, either, but just like with Arcee - Skilled Fighter, it isn't an ability we're going to be overly concerned with.

Red Alert - Security Chief: And then there's Red Alert, a very vanilla character with no abilities on either his alt or bot modes. What he does have, though, is a base 5 attack and 10 health, both of which are exceptionally good for his star cost. He may not be the most complex element of our deck, but he is very solid.

The purpose of this cars deck is to hit hard and fast, while simply out-attacking our opponent. By going four-wide on characters, we're already ahead of the average curve, but we need to stay that way as well. Disrupting our opponent's line-up by taking out their key players early on is going to be key to our strategy, so we'll need to be smart and chose our plays well. We also need to know when to make big plays and when to hold back for a greater swing a couple of turns away in order to take down one of their lynch-pin characters who hasn't been tapped quite yet.

Some of the cards in this build are self-explanatory, such as Grenade Launcher, Power Punch, Supercharge, and the like, so today we're only going to talk about the more important cards that we really need to play more strategically. This will then inform our choices about when to drop the afore-mentioned cards to fully maximize our damage output on the right targets.

Start Your Engines and Roll Out!

Remember back when I mentioned that we're going to want to be flipping Prowl? Well, these are the means that are going to enable us to get the most out of those flips. Most of our other characters are going to want to attack our opponents while in their bot-modes, so this may seem a little unintuitive, but let's examine these effects in the context of how the rules of Transformers: TCG work.

Let's suppose that we have our characters all in bot-mode, and we play Start Your Engines. We first flip all our characters to car mode simultaneously, and only after do we resolve any triggers that happen when they are flipped. This means that no matter what, we are guaranteed to get Bold 2 on all of our cars, not just the ones that were flipped before we flip Prowl. Sure it might mean that we'll then have to re-flip one of our characters to use their bot-mode abilities that we treasure, but it is a small sacrifice to get them the extra combat flips on attack.

For maximum effect, we'll likely want to save these cards for turns where we're going to be able to attack with multiple characters in a single turn. Again, this deck isn't your typical orange bold deck that only cares about our immediate turn, but looking ahead to future turns as well. 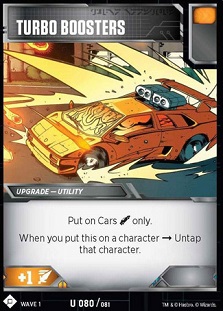 And looking ahead to future turns is precisely what Turbo Boosters is all about. Being able to un-tap a car gives us that attacker advantage that I spoke about earlier, with a little bit of extra on top in the form of a boost to our attack value. Having these available early on will allow us to out-pace our opponents on attacks, setting us up for a turn where we'll be able to attack with at least 2 of our characters, and hopefully more. Even if this card gets scrapped before we can use the damage boost, the real damage has already been done. 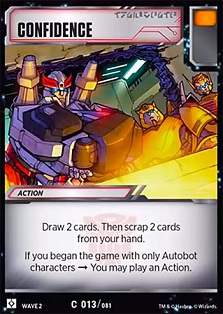 It may not seem obvious on the surface, but every part of Confidence's text is beneficial to our overall plan. Drawing cards helps us dig for the tools we need to pull off our biggest hits, while discarding cards from our hand lets us flush the cards we'd rather see pop up during combat, such as Peace Through Tyranny. Since we're sticking with Autobots for our team build, getting to play another action is just a very sweet bonus. Since we're going to be missing out on some of the card draws that Cliffjumper would have provided, our Confidence plays become even more crucial. 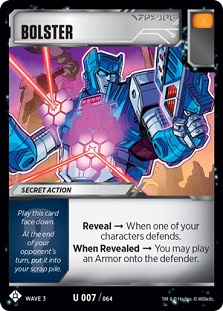 If you've watched the video break-down of Kevin Allen's deck near the top of this article, he does a great job of explaining the versatility of this secret action. It may not seem like an obvious choice for inclusion in a deck that mostly wants to hit and never block but being able to flip this during a defense and play a Force Field or a Bashing Shield to totally disrupt your opponent's attack is priceless. We don't, as a rule, expect our characters to live all that long in this build, so being able to keep them going for one more turn is a sweet bonus when it happens. 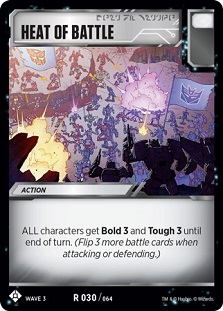 This card may seem like another strange choice, since giving your opponents Tough 3 when you're wanting to deal as much damage as possible feels counter-intuitive, but as Kevin Allen explains, it is all about timing and matchup. If your opponent is playing a heavily aggressive deck, then forcing them to flip more of their cards on defense will hopefully disrupt any big draws or flips they may have on attack while not greatly affecting the damage you'll be dealing against them. Definitely a great play if you're getting to swing with more than one character on your team in a turn.

On the other hand, if your opponent is playing a defensive blue build, then playing this card on a turn when you plan to attack with Arcee - Skilled Warrior means that, again, their defensive flips are only worse for them. Her ability to deal piercing damage equal to her attack value means that all of her damage will get through, while also potentially disrupting their draws and causing them to waste more cards from their deck without actually blocking any damage.

This deck is very aggressive, but not blindly so. It takes a good amount of finesse to make this build work, so understanding why each card is in the deck and when best to use it becomes a major part of piloting this deck well. As with any deck in Transformers: TCG, you need to ensure that you're getting the maximum amount of benefit from every play and flip, and this deck is a great example of where thinking ahead to those turns where you can get attack advantage over your opponent really pays off. Hopefully this article will help you see why certain cards were chosen for this build and get you thinking about your own choices in the future.

So, here's our slightly modified version of Kevin Allen's deck from GenCon that won't break the bank over Cliffjumper.