Bah-weep-Graaaaagnahwheepnini bong, gamers, and welcome back to another article about Transformers: TCG. How many of you remember the Firecon toys from the late 80's Transformers toy lines? I used to own a couple of these guys, and they were fantastic. Each one had a gimmick where you could push them along the floor and sparks would shoot from their maw in an epic display. Well, epic for a child, anyway. However, safety concerns over toys whose main draw was the ability to generate fire and a lack of cartoons to help sell the toys, the Firecons faded into relative obscurity behind the more marketable characters from the Transformers toy lines.

That is, until Hasbro and Wizards of the Coast brought them back as one of the sub-teams in Wave 3 of the Transformers: TCG! Today we'll be talking about how to make these guys spark once again, bringing the heat and pressure down on your opponents! The name of the game with this deck is disruption and damage, robbing the other team of their upgrades and swinging across for massive hits as often as we can.

Leading the team is Sergeant Sparkstalker, and while his stats aren't overly beefy, he does boast a 4 attack and 2 defense in both modes so we don't have to worry about trading off when flipping for his abilities. And what abilities they are! Once you've got Sparkstalker in bot mode, he's going to be a somewhat consistent draw engine for our deck, since we're going to be leaning heavily on orange pips and having plenty of Bold on our Firecons. Flipping him back to alt mode also continues our disruption tactics by allowing us to scrap an armor off an enemy. The timing of these flips is going to be crucial to making sure our biggest hits get through.

Backing up Sparkstalker is Raider Cindersaur. Once again, we're relying on a combination of a static bot mode ability and a solid ability on flipping to alt-mode to keep our flames burning. Again, with the amount of bold and the sheer number of orange pipped cards we'll be slinging, his direct damage ability is generally reliable. We'll also have enough worthwhile orange actions in our deck to make sure that flipping him back to alt-mode will give us a solid action advantage.

Rounding out the triad is Raider Flamefeather, who we will rely on for helping to activate our other Firecon's abilities as well as stand in the way early and take hits for us. Being able to add to his defense value for each orange pip flipped during combat means that we'll want to attack with Flamefeather out of the gate and help direct our enemies' attacks against him. This isn't going to save us in the long run, but our plan is to not let there be a long run. To that end, once Flamefeather has taken a hit or two for us, flipping him back to his alt-mode gives all of our Firecons extra Bold, which as stated, will lead toward more activations of Sparkstalker and Cindersaur's bot mode abilities.

Now that we've covered the kindling that is our Firecons, let's take a look at what we'll be bringing in our deck to fuel the flames. As stated previously, the two cornerstones of our strategy are disruption and damage. Let's start by examining our disruption tactics.

Most of our plan for tripping up our opponents comes from our choice of equipment. Bashing Shield¸Enforcement Batons, Reactive Armor, and Scrapper Gauntlets allow us to get some extra attack and defense on our characters, sure, but that's just an added bonus. Each of these upgrades allow us to deprive our opponents of their own upgrades by scrapping weapons and armors our opponents may try to use against us, either when we equip them or when they are scrapped, so we're going to burn them coming and going.

Because our equipment targets our opponent's upgrades when scrapped as well as when equipped, we are empowered to swap our equipment often. To accomplish this, we're going to rely on a few less obvious tools such as Scavenge the Battlefield, Bolster, and since our character cards only add up to 24 stars out of our available 25, a copy of Full Loadout. The standard Transformers TCG deck is a minimum of 40 cards, and for efficiency that's what most decks run, but I think we can make an allowance for 41 cards in this case.

Now that we've covered the first part of our strategy, let's toss some gas on these flames and really get our Firecons roaring! Fittingly, we're going to be running a full three copies of Firecon Flame, since all three characters on our team are going to benefit from the stacking Bold. Since it is the only Utility upgrade in our deck, we should feel no qualms about playing it as soon as we can get it into our hand. 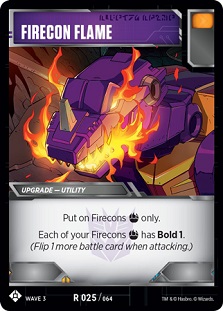 Considering the build out of our deck, we're going to want to also lean heavily into a Bold strategy over a straight attack value boost or direct damage. Cards like Power Punch and Supercharge both provide that hot Bold 3 that we want, while thankfully coming from two stacking sources, one an action and one an upgrade. Our plan here is simple, just play as many Bold effects as we can, and simply brute force our way through any defenses we may encounter.

Since we're not exactly concerned with own defenses, having Erratic Lightning does not necessarily hurt us as much as it may some other builds. If we do find that it is a detriment to our overall plan, we can always sideboard it out between matches, but what we're going for is overkill, and +3 attack is nothing to laugh about. At the same time, we're going to be running Force Field, since the damage reducing effect doesn't take our defense value into account. Plus, it is more white pips for enabling even bigger swings. 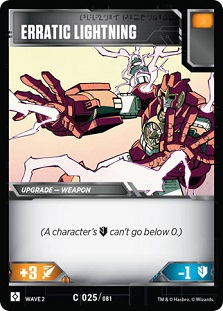 So far we've looked at how our deck fries our enemies' upgrades and then immolates them with a barrage of heavy hits, but let's take a moment and talk about some effects that will enable us to pull all of this off with even more regularity. Swindled lets us filter through our deck as well as drop dead cards from our hand as well as giving us a second upgrade play per turn. Rapid Conversion gets in there for both being a white-pipped card and for letting us flip our Firecons more frequently, allowing us to have even more access to those hot alt-mode flip abilities on Sparkstalker and Cindersaur. Ready For Action is a bit of a risky add to the deck, admittedly, since it doesn't have any orange pips on it, but what it does is allow us activation advantage, enabling us to get some big turns in and to keep going when our opponent's field is all tapped out.

And that's pretty much it! This deck isn't complicated, but it is exciting when you start making those big, game-changing swings at your disarmed and vulnerable opponents! So go out there and incinerate your enemies, leaving nothing but ash in the wake of the raging inferno that are the Firecons! I promise that is my last crudely shoe-horned in fire reference for this article.