Bah-weep-Graaaaagnahwheepnini bong, gamers, and welcome back to another article about Transformers: TCG. Every TCG has at least one card or mechanic in them that just doesn't seem all that useful for the rarity at which they've been designated. Think Archangel's Light from Magic: The Gathering, or other cards from other games that are just unplayable, and yet also extremely high rarity.

Wave 3 of the Transformers TCG has just such a card, a Super Rare character by the name of Sergeant Cog. As a personal challenge to myself, I've decided to build a deck around Cog just to see what, if any, advantages he may be able to bring to the battlefield or whether it's even possible to build around him enough to have fun. So, come along for this ride with me, and let's see if we can turn this maligned Weaponizer into a force to be reckoned with!

So, let's talk a little bit about Sergeant Cog, and see what it is that he brings to the table. 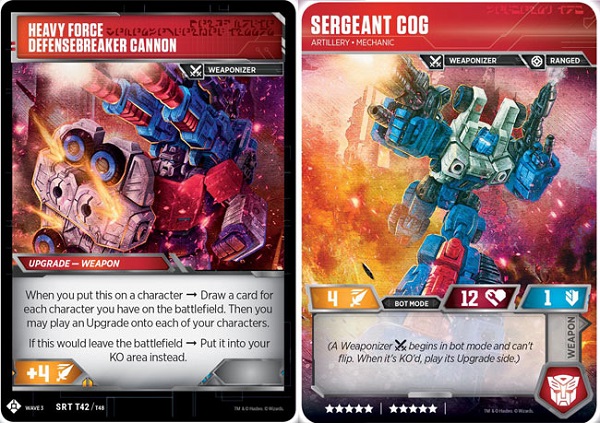 For 10 stars, Cog's starting form doesn't really seem to offer a lot to a team, with no built-in abilities and stats that are on the low side when compared to other 10-star characters. Where he shines - well, more shimmers - is what he becomes once he's KO'd, a weapon that grants plus four to a character's attack. With only 1 defense, however, he's a little bit of a glass cannon. No matter, because as a Weaponizer he's not just dead when he's dead, he's a weapon!

To try and get the most out of this theme, and because we want to make sure that we're hitting as hard as we can as often as we can, we're going to team Cog up with a couple of other glass cannons. Keeping things on theme, we're going to use two Autobot Battle Masters, Private Lionizer and Private Firedrive.

Firedrive generates card advantage for us on attacks, as well as turning into a weapon that lets us pitch extra cards into our scrapyard for more attack power. Lionizer has no attack power on his own, but does come equipped with a built-in Bold 4, which he can then transfer to another character in his weapon form after getting KO'd. The point of playing three characters that only get better when they die is to make our opponents hesitate before trying to take any of them out. Due to the turn order of the game, we are all but guaranteed to get at least one attack off with our newly equipped carcass before the enemy has an opportunity to scrap the upgraded form of our characters.

The point of this deck is to swing hard, hopefully to force our opponent to give up any long-term plans they have in an attempt to KO our characters quickly before they get a second swing. We also want to cause as much mayhem and damage as we can before they do KO us, and hopefully enough to secure us the victory. To pull this off, we're going to need a deck that allows us to drop as many orange pips on our foes as we can, and that means pumping Bold as high as we can get it.

This battle deck is going to be very simple, mostly, relying on some old standbys for getting as much Bold onto our characters in a single turn as we can. This means we're going to be running good balance of actions and upgrades that provide the Bold boost so that we have a good chance of playing at least two cards on every turn. To get them out of the way, we're only including Improvised Shield and Peace Through Tyranny because of the double orange pips that they sport. Fortunately, playing Peace Through Tyranny as our action may not actually be all bad for us, all things considered, so having it in our hand isn't as dead as it may seem.

Many of our action choices seem pretty straight forward, but let's talk about a few of the less obvious choices that we've included. Incoming Transmission doesn't actually provide us any Bold, so it may seem like a poor choice for this deck, but since we're running slightly less Upgrades than Actions, we'll want to use this to fish for those upgrades as well as stacking our deck for an upcoming attack. Another option might be Treasure Hunt, but we aren't that heavy on upgrades, so we'd likely just end up scrapping actions that we want to use.

Another non-obvious choice is Focus Fire, which allows us to play multiples of the same card in a single turn. Sporting a green pip also lets us filter dead cards like Improvised Shield out of our hand to get more of them into our hand where they'll be the most useful. As previously discussed, Heat of Battle is fairly strong in the current aggro-heavy meta, and even against Tough decks we're going to be flipping enough cards that we'll still be able to get a fair amount of our damage through.

Because we're playing some Battle Masters, we're going to include Quatermaster, in our list to get those weapons back out of our KO zone if we need them. They also have White battle icons which only gives us more flips to pile on more orange. Press the Advantage doesn't provide Bold, but it is a counter against any Decepticons we may come across, giving us a potential extra 4 damage if both effects of the card come fully into effect. It also has a green icon, so like Focus Fire, we can pitch dead cards to it and use it on our next turn.

One of the largest threats to our build are wide decks that punch hard. There isn't much we can really do against them, but we're going to include some copies of Ready for Action in our battle deck. With no real way to search for them, we can only hope that we draw them normally or with Incoming Transmission. Or, since we're only at 24 stars amongst our characters, we can include one copy of Leap of Faith which can also net us the Ready for Action play that we'll need to keep up the activation pace.

This likely won't come as a big surprise to anyone who has been reading up until this point, but the overall strategy of this deck is to just swing in as hard as possible. To accomplish this, we're likely not going to want to attack with Lionizer until we have enough cards to pump his Bold to truly frightening levels, so I would suggest our opening attacks always be with Cog. Given his lack of bot-mode abilities, he really is the biggest liability on our team, and a pretty big asset when he's turned into his weapon mode.

Other than that, just injecting a nice big shot of Bold into our team and trying to one-shot any characters our enemies may have on the table. Wide decks with lower health characters will fear our swings, and even decks with heartier characters will think twice about how to deal with our heavy hits.

Unfortunately, as stated before, we're a whole team of glass cannons. We're going to fall pretty fast to just about anything other than an intensely defensive deck. The point isn't to survive, it's to take as many of our opponents down with us when we go!