Bah-weep-Graaaaagnahwheepnini bong, gamers, and welcome back to another article about Transformers: TCG. Every so often I get an idea in to my head that I think is just rather interesting more so than it is a viable build. Earlier this year, I put together a tough-based deck using the team of Runamuck and Runabout, feeling that their card-draw and healing based abilities would give me a certain edge over my opponents. While that deck did moderately well in my local scene, it was far from being some sort of format-changing wonder, and I always thought there would be some nice way to improve upon the initial designs.

Then Wave 4 was released, and during the run-up to its debut, there were three cards spoiled that immediately caught my eye and got me thinking about how to re-build my blue-based Runabout and Runamuck deck into a bold-based powerhouse. Of course, this also coincides with the current wave of promo cards being gold-foil versions of this pair of miscreants, which is yet another incentive to reinvent the deck and tote it out again, with a nice shiny new paint job. Today I'm going to talk about these new cards, and what they mean for the type of deck I'm running that emphasizes flipping characters as many times as one possibly can.

I'm not going to spend a lot of time talking about Runamuck and Runabout. If you want a break-down on what they do and how they synergize with each other, you can check out my other article about them over here. Sufficed to say, all of the things I said those long months ago still stands firm today. The fair amount of utility one gets from simply flipping between modes with these two is unquestionably strong, though I still feel that in a meta full of very powerful 12-13 point characters (Nemesis Prime, Optimus Prime Battlefield Legend, etc.) they're a bit underpowered for their cost. Fortunately, they make up for it by being just plain fun to play.

Joining our pair of miscreants this time, however, is Steeljaw, the autoboot Mini Cassette. 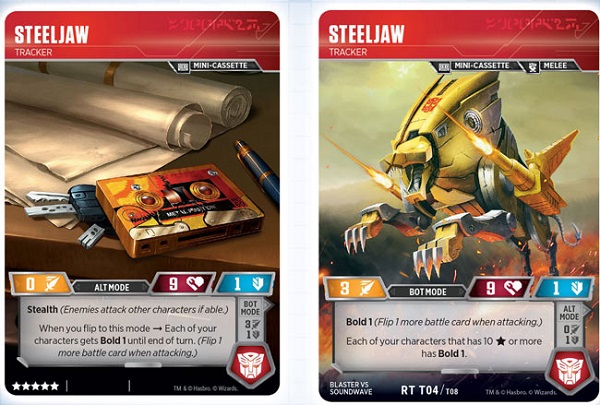 Clocking in at a seemingly wimpy 5 stars, we're not expecting Steeljaw to perform any miracles for us. He's just a solid little guy with 9 health who brings to the table a very similar ability to that of Flamewar from our blue-icon focused build. Due to both Runabout and Runamuck being 10 stars each, his bot-mode ability gives all of our characters a blanket 1 bold for as long as this little slugger survives. With 9 health, that's likely to be a good little bit as well. Being able to tank an average 2 attacks shouldn't be overlooked for only five stars, especially when it will enable us to constantly have at least a single extra card flip on each of our turns.

So what cards have come out in the new set that could make me simply change my mind about Runabout and Runamuck being defense oriented? Well I'm glad you asked! The transformation-oriented equipment pair of Kinetic Intensifier Whip and Kinetic Converter, along with Showing Off is what has changed my mind. All three of these cards work exceedingly well with each other, and with the general flip-tastic nature of Runamuck and Runabout.

Let's take a look at these cards in more detail...

As we can see here, both the Kinetic Intensifier Whip and the Kinetic Converter benefit greatly from flipping our characters over. Normally one wouldn't rely too much on effects that only trigger conditionally, instead looking for something that's going to be either a constant effect or an ability that is going to guaranteed in some other manner. However, seeing as how we're going to definitely be flipping our characters at least once per turn, each, it is safe to say that these effects are going to be triggered enough to make them worth our while.

The card draw on Converter and additional bold per flip on the Whip are simply fantastic effects in their own right. Combined with Showing Off, however, these cards become absolute powerhouses. Suddenly you're doubling up your effects, and with Runamuck and Runabout's own flip abilities, this becomes a game changer. Draw up to 3 cards off a single action, maybe more, depending, and you would still have your normal flip for the turn for even more benefit. If you have the Whip equipped, then that becomes an automatic Bold 4, allowing you to swing into your opponents with devastating force!

To help round out this build, I also am playing 3 copies of Wedge Formation, since I do have all three traits on the field in order to get the maximum effect from this fantastic card. Fight for Position also joins our deck from Wave 4, letting us boost our Bold effects even in the absence of other effects.

Nearly everything else in our battle deck are standard tools of the Bold trade, though we're eschewing some of the bigger favorites for cards that allow us to get our upgrades out of our deck and onto our characters faster. This includes both Treasure Hunt for the former, and New Designs for the latter. I'm also taking a chance with Scavenge the Battlefield as a secret action to help to maintain what momentum we can in the end game when our characters inevitably start to go down.

So, there we have it! We've taken a formerly blue-heavy deck based around the flip utility of Runabout and Runamuck and turned into a bold-focused machine of death and destruction! Come back next week when we'll examine the new Wave 4 Triple Changers!