As the overwhelming tide of Modern Masters has finally subsided, we can now look to the horizon for the next big thing in Magic finance. This does not mean you should abandon Modern Masters for the cash cow it can be, but before I beat a dead horse, I am going to move on. This summer has been packed with Magic, and for that reason, we may have overlooked some of the more ordinary comings of the game, such as the upcoming core set. I also want to come up with a way to give that Dragonâs Maze box away, and since it seems the community prefers a different contest, I am going to throw something together with some added prizes. Last but not least, I want to talk about the upcoming rotation and cover a few cards you should think twice about before selling.

Letâs start off with a few highlights from the current Magic 2014 spoiler. I donât want to cover much this week since I will be giving an in-depth analysis once we have the full spoiler next week, but a few cards note possible price changes in the next week.

Imposing Sovereign may not have time to interact with a well-formed metagame, but we do have a few more Pro Tour Qualifiers after the set releases, so there will be price spikes even on cards looking to be out in the cold come September. I am not sure the The Aristocrats deck wants anything of this sort, but it does fill some necessary criteria for that deck in being both efficiently-costed, a human, and, best of all, a way to race any mirror match. Champion of the Parish has hit an all-time low on the buy list, dropping to a number that makes it so I would rather hold them anyway, so perhaps this will breathe a new wind in the sails of some old form of Humans. If the card turns out to be a bust in Standard, Champion can only grow from here anyway, as it has potential in older formats as well as in casual.

To tie in with the Humans theme, my eye has also been on Xathrid Necromancer for the current metagame. I believe his power will decrease after rotation, but until then, we have a few months of potential The Aristocrats abuse as this guy joins the fray. Allowing your Doomed Traveler and other Humans to work overtime creates very terrible board states for your opponent, many times creating scenarios in which a Wrath leaves you with more power. Although still weak to Terminus, this guy may create better game against some of the field, meriting testing and, in turn, a demand for The Aristocrats cards. Picking up anything that is currently at a lull in the deck in trade may benefit you as people begin serious testing. 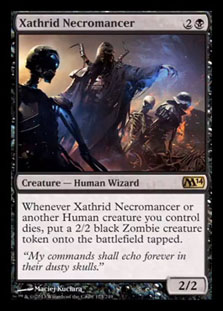 Move in on Primeval Bounty if you can find them at the prerelease. This may look silly next week, as the price may already have spiked by then, but for as much as this card does, it will be a guaranteed hit in Commander. Everyone I have talked to says this card is among the few do-nothings (the turn you play it) that is worth testing due to just how much it does every turn after. I love the idea of this card, but I am not completely sold the price can be much higher than it currently is considering it will be unlikely to show up as a four-of, if at all. The community response typically drives initial price, however, and considering a number of vendors are sold out, it seems this one will at least see some serious testing.

Savage Summoning is still the scariest card from this set and more so now given the amount of play Aetherling has seen. If I had to make a bet on the next $15 rare, I would have to guess Aetherling if only for this card. Think of all the bonuses against a variety of decks. First of all, it gives you the ability to cast Aetherling at the end of the turn, which is huge in the mirror, allowing you to hold counters back all the while having a very relevant end-of-turn play if the opponent does nothing you care about. On top of the uncounterability and flash, which would have probably been plenty, you also get a +1/+1 counter, which may seem irrelevant on most creatures with the exception ofâyou guessed itâAetherling, which now a two-turn clock instead of three. I donât want to spend too much time on this since I will cover more of these interactions next week, but for the record, I feel Aetherling has just begun to show people how to close out a game.

This doesnât merit any particular pick-ups, I feel itâs important to note that Door of Destinies just received a third printing in a Standard set, meaningâlike Gilded Lotus and Akroma's Memorial before itâyou can expect a strong drop initially and watch as the price gradually increases again over the coming years. Dump if you can now; otherwise, trade them into the potential Sliver casual hype before they tank.

Haunted Plate Mail probably shows my terrible-player side coming out, but I truly feel this card may be at least slightly above bulk. It may have potential in control mirrors for just the

-cost ability and how it can kill opposing planeswalkers once the new rules set in. On top of that, this may be a singleton option in the board of some Stoneforge decks if they find it fills any of the decks current holes. I do not know the metagame well enough to know what this does in the format, but I have to believe it is at least worth looking at. I would snag them at the current bulk price if you can and sit on them for a while; Iâm not guaranteeing anything on this one, but I like the versatility.

Moving on to the contest, does anyone have an idea for a fair-yet-difficult way to give out some prizes that ensures someone will win? I have a few ideas, but I want to see what you guys feel would be a financial challenge. Leave a comment below or e-mail me directly, and I will be sure to share the ones that are noteworthy, along with my own, in the next few weeks, and Iâll let the community decide. Along with product, I also have some of the insane Brainstorm Brewery play mats to give out as prizes. Give this one some thought, and respond by July 15 to have your voice heard.

Before I depart for the week to return to a life of buy-listing and Fourth of July festivities, I want to talk about the coming rotation for a minute. Up until the past few weeks, the market had been relatively stable as a whole, but inevitably, the end a format is upon us, and finally, the floor has begun to crumble. Before you go into a panic and sell cards for a quarter of their values, take a hard look at what cards have been holding their values. Looking at cards such as Terminus, which I managed to snag at $3 two weeks ago, we see a plethora of Eternal play laced with a Standard life of ups and downs. This card will forever be a Legacy and Modern staple and will probably occupy a Wrath spot in almost every Cube.

Thalia, Guardian of Thraben was another $3 snag that has almost solely been an Eternal card. In recent history, Maverick and other variants had carried this card to nearly $10 at points, but now coming upon her banishment from Standard, she has hit rock bottom. Expect a jump back up come Modern season, but with a few solid Humans in M14, we may see a spike even sooner.

The last group of cards I want to cover this week includes all of the casual staples such as the Avacyn Restored cycle of Angels all the way to cards such as Parallel Lives. Now is the time to pick them up cheap from people looking to get out of rotating cards. These will probably see little to no movement, but they will certainly increase over time. Bruna is my main target, as she is extremely cheap, and you can find them at nearly bulk. Of all of the Angels, she certainly has the most room to grow.

I will cover each of these subjects in more depth over the coming weeks, but given how time-sensitive some of the information is, I want to cover the bases. As always, if you have any questions or comments, feel free to leave them below, and please feel free to throw your hat in the ring for the coming contest idea. Keep an eye out for cards that are beginning to drop over the next few weeks, and analyze what was supporting the price before you enter into a midsummer panic. As always, join me next week for more up-to-date financial information and a full evaluation of the coming M14 core set.