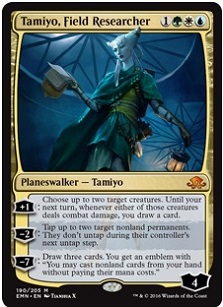 As I sit here listening to the fireworks go off outside, I cannot help but think about the evolution Innistrad is currently going through with Eldritch Moon. The land itself is revolting and the mechanics are all going large, the plane is growing and the inhabitants are just along for the ride. WIth more and more cards previewed, this set is shaping up to make a huge impact on Standard and potentially beyond. We still have less than a hundred cards but with Liliana and Tamiyo among that lot we have no shortage of cards and new strategies to talk about this week.

So where do we start with all of this Eldrazi goodness rolling in? As much as I want to stray away from the walkers, I think most people are looking for ideas so I would be crazy to not at least work on some sort of shell. Tamiyo, to me, seems excessively potent in a variety of metagames; and, as long as Bant remains a popular color combination I expect she will populate the format. With the largest setback of Tamiyo being the mana to get her into play, I believe we will be looking at a great deal of Oath of Nissa. While I have advocated for this card a number of times over the past few months, now is the time to get your set if you do not have them already. Moving forward, this card will likely be a four of in every deck looking to cast Tamiyo; and, given how powerful she is, I expect that to be a solid part of people's game plan going into both Eldritch Moon and Rotation.

So, if Tamiyo is already a known factor moving forward, that leaves us with Liliana to explore. While her abilities may be a bit underwhelming at first glance, I believe she is very powerful given the right shell; and, with our new Green Mythic, Ishkanah, Grafwidow, I think we have just enough to start looking for that shell. I am excessively excited to see where this deck can go, so don't be surprised if I keep coming back to a Delirium or a Graveyard theme. I am a little biased and it seems the tools are here on Innistrad ,at last.

Ishkanah is exactly the type of card I was looking for out of Eldritch Moon to push Delirium beyond just a happy accident in Limited. Not only does the spider gum up the board very nicely with a formidable force, if you happen to be on the offense, it also provides a win condition for the late game if the best you can do is stall. Really the only negative with this card is itâs Legendary, meaning you are likely waiting between deploying multiples, slowing down the rate at which her ability can close out the game. If that's the downside to running a full set, I think I am still sold. Really the hardest part of building this deck was deciding which route to take the spider. I settled on these two.

Of course, without the whole set out currently, we do not have an exact idea of what Delirium cards will make the final cut nor do we know all of the enablers. With what we have, there is a reasonable push for the archetype; and, just from initial theory-crafting, I feel it will have a reasonable match against the tribal aggro decks that are likely to be showing up. While this version does play well into the powerful Delirium mechanic, I am not sure it has the best match against the current G/W and Bant decks. That is where the other version I had comes into play. This feels almost like a super-friends build, but, rather than utilizing planeswalkers to create a force, you are using mass removal and the Grafwidow to hold down the fort while keeping your opponent at bay.

I feel like this deck would rather steer toward Black, but, with what we have from the new set, I settled on Red for removal instead. Oath of Jace plays a role in this deck that I don't believe can fully be understood yet as we have yet to see a deck that can make use of every aspect of the card, even the discard. Kiora, Master of the Depths is another walker that has just not had a deck to shine in; and, while this may not hit a creature often with the minus ability, I feel the extra Jace activations and mana ramp make up for that quite nicely. Even if you only hit a land, that is just putting you one step closer to Delirium.

So what if you are more interested in your creatures being turned sideways rather than approaching the format from a graveyard angle? Luckily almost every tribe has received a nice compliment of cards from Eldritch Moon, so I can really make an argument for any of them to see a spike in play. That seems to be the truth to any second set, but this time around I am having a tough time finding cards that don't merit some amount of experimenting. Very little seems completely unplayable. It really seems Wizards outdid themselves this time around. Not only did they hit the Vorthos out of the park, they also provided a strong series of playables to support that story and push play in Standard.

This week I am going to focus on Zombies, as I feel the deck finally has enough support to start building around the tribe. Also, I still canât quite let go of my graveyard fascination that Innistrad has kicked in. While I am sure we will see at least one or two more playable options, it seems the undead are finally making a return after years of slumber.

I really am looking forward to rotation as most of the aggro decks I have been able to concoct continue to have issue with G/W tokens. That is clearly not a place you can afford to be right now. While I am not certain what Kaladesh will bring, one can only hope it is friendlier to tribal than what we will be losing. Diregraf Colossus still has to be my single favorite reason to look at this archetype, and, even with the tension this card has with recursion effects, I have a tough time seeing a list with less than four.

The issue I have been seeing so far with the tribal Black decks is that they both want to fill the grave and discard but the tribes do not have any real synergy outside of that. This means, while a card like Voldaren Pariah may slot nicely into this style of deck, it is really hard to justify the spots when you are playing cards like Diregraf Colossus. I am still working on a shell that doesnât focus as much on the particular tribe but instead attempts to maximize the madness and discard triggers. I am still a card or two off in the early game. It would be really unfortunate for the set to be overshadowed by Collected Company but I fear that may still be the reality for the remaining few months.

Join me next week as I give in and look at Green based creature decks to try to fight fire with fire. Werewolves or humans, something should prove good enough to break through the token decksâ reign. If you have any lists you are working on for any of the tribes, feel free to post them in the comments below or find me on Twitter. I am looking forward to continuing work on grave based themes and potentially a U/G/x flash deck as we finally have a counter to combat the Ulamog end game of ramp decks, making that strategy much more viable. Until next week keep the brews flowing and enjoy the rest of the preview season!