For the past few sets, I have been trying to wait until a set is fully spoiled to start in on my financial analysis, but this time around, I just canât help myself. I see all of the naysayers online talking about the mythology and how far off the set is from historical knowledge of the times and storiesâbut I am in Olympus in regard to both the playability and flavor of Theros.

I have been watching a trend through the past year within the financial end of Magic wherein cards that see very little to no actual tournament play hold their presale priceâat times even creeping higher. Vexing Devil is a great example of a card that see little play within the competitive realm of Magic that has a higher price tag than some tournament mainstays such as Supreme Verdict. This may seem like a random time to be bringing up such a subject, but I believe this ties in very well to what we are going to see in Theros, regardless of play in some cases.

My initial theory for this began, as I said, about a year ago, when I expected Trostani, Selesnya's Voice to spike rapidly and hold value just due to the casual appeal. If anyone remembers, we did see a very strong spike initially, but over the course of time, the price was worn away by months of hiatus until it was rejuvenated recently within the G/W shell. With Magic 2014 Core Set, I have seen a few cards follow a different pattern thus far. Archangel of Thune and Kalonian Hydra have both seen sporadic play at best and have retained relative values while many other casual cards within the set tanked, mostly due to reprinting.

If these prices can hold due to casual appeal, whereas in they would have probably dropped a year ago, that means something about the community has changed. This is all from my private observations, so take it as you will, but I have noticed a number of casual players venturing into local stores for Friday Night Magic and other small tournaments. Within the past year or two, Wizards has put an especially hard focus on the causal player; tuning prereleases to draw a more causal crowd was just the beginning. Now that we have a more versatile tournament environment for the newer players, they seem to be venturing in to local shops more often, exposing them to competitive Magic at times.

This is where the theory becomes a bit strange, but bear with me. If these casual players seem to be more interested in the tournament scene, they probably are realizing how underpowered their decks are when faced against some of the more serious FNM crowd. When a player sees cards such as Archangel or Hydra, he or she sees the raw power and ignores virtually everything elseâsuch as the cost or validity in the format. When a player wins with one of these cards due to the sheer power, as players sometimes can, it reinforces how good this card is to such a player. These are not the players to rush out and net-deckâthey typically open bombs like this and include them in their decks or build around themârarely do their lists come from online at first. To this end, their ideas of improving their decks when they see that all of the competitive players have multiples of their bombs is to acquire more of their key cards.

While none of this can be proven yet, I believe we are in an era of resurgence for Magic, not like before, when the game was on its last leg. No, we are seeing a boom in the player base beyond the already-thriving community we have. As the past few sets have released, we have seen more and more demand for product as stores still, on occasion, will run out due to popularity. Even with all of the product being opened, we are still seeing a spike in prices overall, as the demand cannot be met for a reasonable rate.

So, where am I going with all of this? What I foresee for Theros is not only short-term value due to Standard playability, but long-term gains without a heavy drop in price. This year, the rotation tank was lower than it has been in years, and this is not only due to the Eternal marketâa lot of it also hinges on the casual community, which is now more in tune with the local stores, so when cards begin to drop, casual players see that and purchase staples such as Snapcaster Mage during the lull. Itâs a happy accident of sorts, as those cards will probably see a much higher ceiling in the long term than they did during Standard. 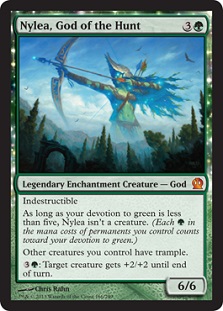 With this revelation, we can now evaluate sets on a different level. This is not to say that every casual staple is likely to hold value, but I will certainly be taking a closer look at cards that are borderline playable while having splashy effects for a relative cost. Even if the Gods donât show up in tier-one lists, that does not mean every mono-green player out there will not be testing Nylea, and with this newfound competitive spirit, no matter how casual, these players are more likely to be trading for a setânot just one.

This, combined with a number of factors, including the increased cost of Magic Online redemptions as well as the enlarging tournament scene, I believe Theros is going change the way we look at Magic prices in regard to the current metagame or environment. For every FNM grinder who decides he wants to attempt Pro Tour Qualifiers and begin traveling, there are more and more to fill his place. Magic is booming more than we have seen in years, and although we, as competitive players, may groan at the awkward side events at prereleases, understand that these events are not for you, but they are bringing about a new base of players. Wizards is trying to bridge that gap between the kitchen table and the red zone, and up until now, I was not sure about their level of success, but it seems clear we are only going to see a constant growth for the foreseeable future.

For those competitive players out there who have problems playing against newer players or perhaps donât have the willingness to teach, please just bear with this change. It isnât all bad, and for everything you teach this person, you will see that reflect upon the community in both growth and atmosphere. I at one point was guilty, too; almost every competitive player is looking down on those new to the game, therefore alienating them from the play group and at times driving them away completely. Though it may be trying at first, understand that these players are the reason Grand Prix payouts are more, they are the reason store events are firing again in some areas, and they are what keep this game around for us.

I am going to keep an eye on a number of cards from this set and see where prices settle, but assuming print amounts stay relatively consistent, I expect there to be a much slower fall from initial prices on a number of mythics and even some rares from Theros. I really wanted to talk about this mostly as a primer to the next article, as I will be using the same formatting I have been while including a number of these cards I expect to hold or gain small value even outside of tournament play.

I would love to see some feedback this week from a diverse group of people from different areas. I want to see if these local trends are widespread or just within the group of people I have talked to. If you have any feedback on particular cards that you expect to fit into this category, I would be interested in hearing about them as well. When coverage first began, much of our price guidance was from these winning decks, and it seems that has still held true for a number of cards, but for others, we see an unexplainable price trend that is now making more sense as the casual crowd emerges for what we all crave: more Magic. As always, if you have any additional input or any word on different trends you have noticed, I am eager to hear about them. If this market truly is shifting in this way, we all have a chance to either jump in on the ground floorâor at least pick up sets of cards we are looking to play before they spike. I do not believe this spike will be as widespread as when Commander became a thing or when Modern was announced, but there will be a number of additional opportunities within most sets to make profit if you can sneak in at the right time. I have not watched the market enough to see when that is yet, but as the sets roll out, we will slowly figure out the trends. As always, thank you for reading, and I hope, even more than usual, that you have taken something away from this week. I know I seemed eager in the introduction to go into particular cards, but I am still saving that for next week.