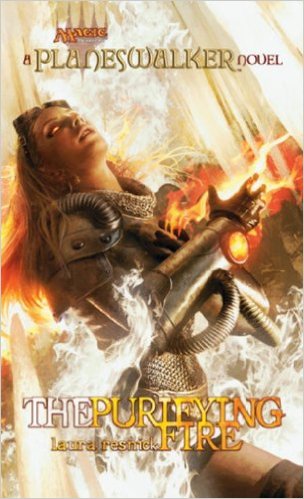 As much as The Purifying Fire is a real solid part of the Magic canon, and as much as I think it really sets up Chandra's story arc and character conflict, it's not without it's black marks; black marks like the Black-mana-shrouded plane of Diraden, home of the vampire prince Velrav. Unpacking why Diraden doesn't work, and why it is the way it is in the final published book, requires delving a little deeper into both the story, and into the way the Magic novel line was produced.

Chandra and Gideon crash land on Diraden partway through the novel and quickly discover that they can't access their mana. A worldspell has been cast by Velrav that shrouds the plane in eternal night and blocks all colors of magic except Black. This is actually a great set up, and author Laura Resnick's rationale for the arc makes a lot of sense. According to a Q&A on the old Wizards forums, Resnick's sense of Chandra was that she was "all about fire power" and so it made sense "to explore who Chandra is and what Chandra's like if you take AWAY that power." It's a great conceit for at least part of a Planeswalker story, given that so much of what defines 'walkers is their ability to cast spells. Moreover, I think Resnick's take on Chandra is basically spot on: as I noted last time, fire is the solution to, and cause of, all Chandra's problems.

But when we get to the end of the Diraden arc the last two chapters areâ.â.â.â strange. Chandra and Gideon are captured by Velrav, who wants to try and steal Gideon's Spark (because he's bored ruling over the slowly decaying Diraden). Velrav's father, the old king, meets them in the dungeon and in a moment of lucidity between bouts of raving he suggests that he and Gideon use illusion magic to switch places, thus botching the spell and breaking Velrav's hold over the succession-based magic powering his worldspell.

And then it comes time for the ritual and it just sort ofâ.â.â.â turns out that the plan didn't work, and Chandra just gets really mad and arbitrarily gets her fire powers back, and she burns Velrav to a cinder.

It'sâ.â.â.â yeah. Strange. We get a setup and then a random about face and then a deus ex machina, a solution to the problem that comes out of nowhere and is in fact never explained or addressed again, and all of this happens literally within the span of just a few pages. It's jarring to say the least.

I think, though, that the jarring nature of this goes beyond simply how abrupt everything is. It's not just that Diraden "breaks the rules of writing" or something as simple as that. I'm always a little bit leery of critiques like that, actually. Too much of the literature that I find most engaging tends to play fast and loose with these "rules." Too great a focus on rules tends to lead to sitcom story structures, which are fine for what they are but often less than satisfying from a deeper critical perspective.

So, the swerve in the plot here isn't bad simply because, to put it the reductive terms I often see bouncing around on the 'net, it "breaks the contract between author and reader."

No, it's frustrating because there's no particular setup for it and no use of it later on. It's clearly stitched together with little integration into the wider whole or interest in the actual larger thematic arc that this serves.

Nope, in that same Q&A thread and elsewhere Resnick revealed that once the manuscript was sent in, she was out of the process and had no idea that several chapters, including part of the opening and all of chapters 14 and 15, the problem chapters on Diraden, had been rewritten in-house. We don't know what exactly was there before, but the scars of the plot transplant are pretty obvious. It's impossible to say whether the original version would have been an improvement â Laura kept mum about the original content of those chapters â but I don't think it's hard to argue that what's there now is disappointing.

What really makes it so disappointing I think is the missed opportunity for another parallel narrative arc. This is a bit more apparent now than when The Purifying Fire was first published, in fairness. Now, we have Kaladesh serving as an example of Chandra's effect on planes. As I discussed last time, Chandra's narrative pattern seems to be: she shows up on a plane, her presence in one way or another helps make apparent the existing imbalances and contradictions within the system of that plane, and then she acts as the catalyzing spark that leads to a new revolutionary synthesis, a new status quo on that world. On Kaladesh she helps spark the Aether Revolt. On Regatha she is the vehicle for the Purifying Fire to overthrow the Order of Heliud. On Zendikar she helps release the first lock on the Eldrazi.

And, hey, on Diraden she enables the destruction of Prince Velrav and his cloak of darkness, the regime of power so absolute that it reshapes the very mana of the plane! Parallel drawn right?

Well. Sort of. I mean, she does DO that â she leaves the plane after killing Velrav and effectively killing his father as well. And in the process she brings about a new kind of balance, a new status quo. But there's something missing in this dynamic: there's not really the same sense that she's acting as the vehicle for a greater balancing force or enabling a reckoning that was a long time coming.

This is why the totally incidental, arbitrary nature of Chandra breaking through the Black mana shroud is so jarring. It just has nothing to do with the rest of the narrative. The dodge away from the old king's plan is shocking because it essentially removes from the conflict between Chandra and Velrav the only planar native previously involved, and Chandra's revelatory moment of anger doesn't seem to have been revelatory at all, and has no relationship to the wider arc ending with her reconciliation with her past after entering the Fire.

I think we can envision alternatives that might have operated a little better. Not to get too into fanfiction territory (I don't think they'll pay me for that, sadly) but the possibility that comes to my mind is one that I think has real appeal for long time players of the game. Remember: "what began as Black/has slowly shifted to Red/fickle color pie." Chandra's bursting through the Black mana shroud already feels a lot to me like mana ramping, like finding a way to charge up a whole bunch of Red mana from a minimal starting point. And mana ramping, of course, famously used to be Black.

Could this scene have been written to capitalize on that, and on Red's long association with blood, to be about the shift from Black to Red, about Chandra finding some way to find the Red not within her own anger (whatever that means) but in the very blood magic that Diraden is dominated by? Heck, it even makes for a bit of an interesting parallel to her later encounter with the Purifying Fire, representing another case of Chandra appropriating a completely different color for her own use, reinterpreting another element into her own fire, turning the very mechanisms pitted against her in on themselves.

This is just one solution. I'm sure there's others, and I'd love to hear in the comments how all of you would have solved the problem of Diraden. The point though is that there were artful solutions here that for whatever reason weren't taken, instead resulting in a final narrative that doesn't really fit together as well as it should.

Well, as noted above we know from Laura that this was replaced at the last minute by the editors at WotC. This is kind of in keeping with how the old novel line worked in a lot of ways. Now, I'll always be the first to defend the old novels. But let's be real, the editing jobs those books got wereâ.â.â.â not great, by and large. I actually kind of forgot just how shaky some of the editing really was, until I was confronted again by the surprisingly large number of basic typos in The Purifying Fire. It was a reminder that during this period of the storyline, the novels were being produced rapidly without a whole lot of oversight.

And that, folks, is how you get things like "Clockworking."

I don't think this is necessarily the fault of the editors at Wizards. I certainly never got the impression from Laura that she had had a remarkably negative experience writing for Magic, and in fact she describes the process as a natural result of a number of factors: the generally tight turnaround time required for anything published by Wizards, her own lack of familiarity with Magic (which slowed down her writing process measurably, apparently), and so on.

While Laura's outsider status could be blamed to an extent here â she can't really have been expected to come up with the kind of complex in-joke about mechanical shifts like I suggest above â and while generally I think the move back in-house has been good for the storyline, I don't think it can really be considered the major factor in how the Diraden rewrite went down. After all, both TPF and Agents of Artifice are great books, despite being written by folks unfamiliar with Magic.

No, I think if there's a lesson to be drawn here it's just that if you want your storyline to make sense you have to, you know, put time, effort, and resources into making sure your work is of a certain standard of quality. That, to a large extent, is why creative teams are so big these days! And I think the cohesion of Chandra's arc by the end of Kaladesh demonstrates that this kind of oversight â and a willingness to devote resources to, like, remembering the content of stories that came out more than a year ago â really works.

What I think is really important to remember here, though, is that continuity, theme, basic copy editing, and making sure mechanics and flavor line up are all part of the same critical editing process. In the same way that checking for errors on cards is a process that involves development (checking power levels), proofreading (checking that "artifact" is printed on all your artifacts), and creative supervision (so that we don't have another lemur/lemure mixup), the Diraden arc demonstrates how thematic-, continuity-, and copy-editing are part of the same critical process, and we shouldn't be surprised when they tend to succeed or fail as a group. Diraden is a missed opportunity for Chandra's arc, but it's an opportunity to understand where the cycle of storyline creation can, just like the cycle of card development, go wrong.