It is interesting to note that Wizards finally seems to be catching on to the fact that they have to actually design Standard as a format, otherwise you end up with a mediocre format. Iâve recently begun to see Wizards make a real attempt to sculpt formats with card printings and card choices, the most glaring example of which was reprinting Mana Leak in M11. I want to talk today about one of the core elements of formats, and how they operate.

This is an archetype versus archetype predation. Strategic Superiority happens when one deckâs strategy either 1) advances the strategy of their opponentâs deck, 2) has no reasonable way to interact with or hinder the opposing deck or 3) has an unstoppable trump.

An example of (2) â which of the following two decks would win if they played each other:

I would be surprised if Deck B was able to win even a single game against Deck A, as they will likely be dead before they cast their first Tyrannax. Deck Bâs strategy is just terrible against Deck Aâs. In this situation, Deck A has Strategic Superiority.

Moving to an example that you might have actually see at a tournament for (3):

This deck had Strategy Superiority because of the dual trumps in the match-up â Kitchen Finks and Cruel Ultimatum. The aggro deck had no real way of dealing with the advantage generated by those cards and thus the game became about whether or not the Cruel Control mage was able to find and resolve those spells before he died. Since this happened frequently, the match-up was favorable for Cruel Control. The aggro deck could win, but it was definitely an uphill battle.

Category B: The Circle of Predation

There are four pillars of this circle:

At the core of most strategies in T2 is one of these four elements. These four elements form the basic structure of what I will call the Circle of Predation. The Circle of Predation demonstrates inherent strategic strengths of one type of strategy against another. It is not Strategy Superiority, just inherent advantage. In other words, itâs not to say that these strategies canât beat the strategies that prey on them, itâs that they have an uphill battle to do so.

This is the basic Circle of Predation: 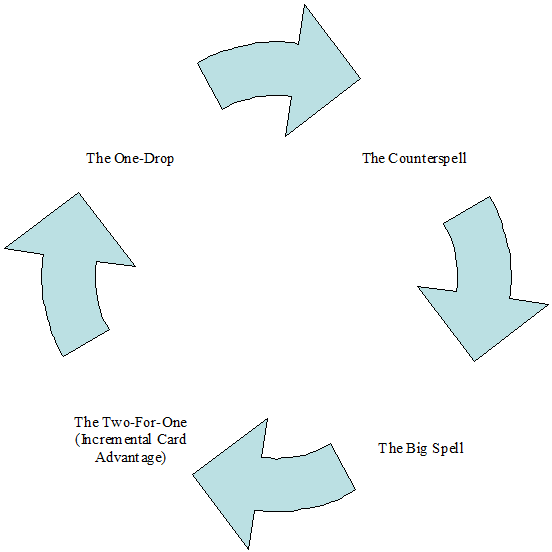 Tempo decks (Ponza is the primary example) prey on two types of decks â decks with weak manabases and The Big Spell. Their greatest natural predator is usually The One-Drop. The thing with these decks is that they can end up preying on almost anything because they prey on weak manabases. It is possible for a Counterspell deck, Big Spell deck, or Incremental Card Advantage deck to have a weak manabase, leaving the door open to a Tempo deck to prey on it.

Examples from the modern history of Magic of the Circle at work include some of the following decks:

The One-Drop vs. The Counterspell â Zoo vs. Faeries (Extended 2009)

Each of these showcases inherent advantages to the appropriate side within the circle.

So how do you reverse trends in the Circle?

Jund was a perfect example of #1. Jund is an incremental card advantage deck, but the card quality and power was just so much better than anything else in the metagame, and thus it dominated the metagame for a while.

Many modern builds of UW control are examples of #2. They run some countermagic, but also run things like Planeswalkers and Titans that are big spells, so they can just out-trump you in ways also. Thus they can act as a Big Spell deck or a Counterspell deck depending on the scenario, giving them a lot of flexibility.

A good example of #3 is the modern Red Deck. With the Red Deck today, there are two types of games â games where the red deck has Goblin Guide and games where the red deck doesnât. This is because when the Red Deck has Goblin Guide it is acting as a true one-drop deck, and thus has all the advantages associated with that strategy. However, when it doesnât have Goblin Guide the strategy becomes much weaker, since it relies on a two-drop to do that job.

Applying the Circle to Designing and Viewing Standard as a Format

In order to keep each element in the format strong, each element has to have strong cards to work with. This means that there needs to be good one drops in aggressive colors (typically white and red, but basically red in most formats), good counterspells, good big spells, and good two-for-ones. The reason I argue for the printing of Mountain Lion (Red Savannah Lions) and reprinting of Counterspell (i.e. UU Counterspell) is because these two cards would strengthen those elements in the Circle enough to give play in those departments.

The experiment with Cancel proved that Cancel alone is not strong enough to give Counterspells play in T2. In fact, the combination of Essence Scatter and Negate is not strong enough. There needs to be a 2 mana counter that has play against both creatures and non-creatures. Mana Leak fills this role for now (which is why it was so huge when it was printed), but Counterspell would be better for it. The fact of the matter is, a card like Mana Leak or Counterspell is necessary for a healthy Standard environment.

By creating a Circle that is not heavily skewed toward any individual strategy you bring balance to a format at a core, fundamental level. But it does not make the format interesting.

Interesting formats are created by wrenches thrown in the typical paradigm represented by the Circle. This is where Combo and Tempo come in. Combo and Tempo interact with the Circle in different ways than the core elements, exerting stress on the format that makes it different. Stone Rain is a critical element for Tempo decks, because of the nature of the archetype. Applying pressure is critical, and that has proven to be only effective when it starts at 3 at the latest. Starting at 4 is simply too slow.

I am happy that Wizards has pushed the power level of creatures. They always should have been a relevant and important part of tournament magic and they are now finally taking their rightful place on tournament tables everywhere. However, a focus on creatures vs. non-creatures is too simplistic. It does not encompass how Magic formats operate as a whole.

What I have presented here does not encompass every Magic format either, but it is a pretty good skeleton of how T2 operates and how Extended will operate in the future. Eternal formats are basically a different animal. Still, Standard, as Wizardsâ most popular format, needs to be designed to be a fair and balanced environment. The Circle of Predation is a good place to start.