Login
0 Item
Advanced Search
Sign In
Create Account
You're a good ten minutes into your game against Saluki before you realize that you have no idea what you're doing.

It's probably because you're playing one of CJ's decks. This one has a theme that became really obvious after the first few turns: Your first play was a Wild Dogs, your Hollow Dogs were recently on the receiving end of a Condemn, and now you're about to lose your Mortis Dogs to a first-striking attacker.

"Yeah, but it's cool. I always wanted to build a Hound deck."

"But I'm playing against a Human deck!"

"Oh yeah. I had a lot of Human creatures, too."

"And it's as if all the noncreature cards in this deck were randomly chosen!"

"I didn't think about those too much, yeah."

You sigh. Now you know how Mari feels.

The game provides you with a good distraction, at least. "I'll block your Jor Kadeen, the Prevailer with my Mortis Dogs," you tell Saluki.

"Sure. Any other plays?"

"I'll cast a Border Patrol," Saluki says, "and then activate my Salt Road Patrol for its outlast ability. I'll end my turn, so my Exuberant Firestoker triggers from Jor-Kadeen and deals 2 damage to you."

You glance at the Firestoker, which would have been dead ages ago if it weren't for a timely Honor's Reward on Saluki's side. You scribble down your new life total and get back to your thoughts.

You contemplate playing the Bone Harvest in your hand, but then decide to hold off for a little while longer. You draw an Ainok Guide, then shuffle your three cards around, looking for an opening to exploit.

Eventually an idea comes to mind. "Do you have any creatures in this deck that aren't dogs, CJ?" you ask.

"Nope, everything in Baha Men is a Hound."

"Baha Men. That's what I call the deck."

Your eyebrow twitches slightly, but you manage to stop yourself from strangling him right there. "What about graveyard triggers? Does this have a copy of Gaea's Blessing, for example?"

You glance back at the table. Mari might not be here, but you have an idea of how to end this farce. You've been on the defensive long enough; it's time to cry havoc and let slip the dogs of war.

It is the start of your first main phase. Defeat Saluki before the beginning of her next combat phase. 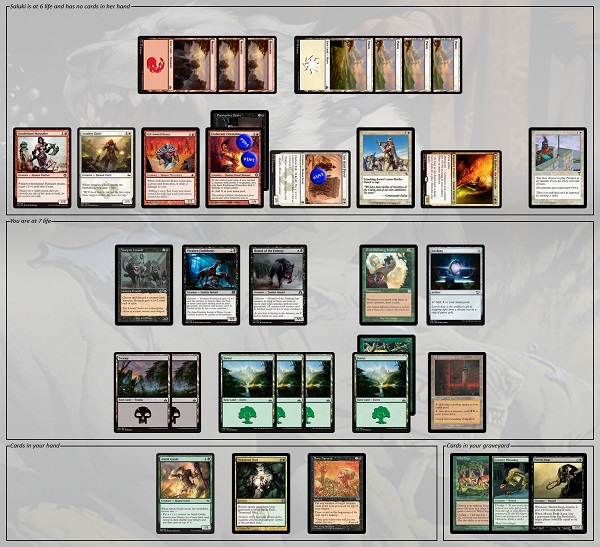 You have not yet played a land this turn. You do not know the identities or order of any of the cards remaining in your library. However, you do know that you have several basic lands -- Swamps and Forests -- in there somewhere.

Saluki is at 6 life and has no cards in her hand. She has the following cards in play:

If you think you've got a great solution in mind, don't put it in the comments! Instead, send it to puzzles@gatheringmagic.com with the subject line "Puzzle -- Year of the Dog" by 11:59 P.M. EST on Sunday, February 18, 2017. We'll include the best ones in next week's article along with the next puzzle!

Quite a few people saw the infinite combo in this puzzle, although it's not actually an infinite combo because there's a limited number of creatures on the table, and Phyrexian Plaguelord can only give so many -1/-1 penalties. The main question lies in how to get the combo started, and how to end it at the right time. Russell Jones writes:

"At this point," Russell notes, "the loop is clear: you can keep sacrificing the Zombie tokens for free, and removing counters from Triskelion for free, and each pair of times you do that gives you a total of:

"Additionally, each time those -1/-1 penalties add up to lethal damage to one of Kent's creatures, you get another trigger on Sadistic Glee that's free of any obligations in the loop, producing a net profit of a +1/+1 counter.

"When you get to rotting away at Rottenheart Ghoul, it will trigger, and the trigger must target youâ.â.â.â but you don't have any cards in your hand at that point, so nothing happens.

"Kent has seven creatures, with a total of 25 toughness. Eating through that by repeating the loop produces enough Scry 1 effects to ensure that your (or rather, Mari's) Piracy Charm moves to the top of the library. Once you have it on top, it can stay on top and ignore all subsequent Contraband Kingpin triggers.

After all of Kent's creatures have been killed off, Triskelion will have seven +1/+1 counters from those, and can get an eighth +1/+1 counter from the Zombie token you sacrificed to administer the last -1/-1, making Triskelion a 9/9. This gives you 22 power worth of creatures, but you can't just alpha strike against a clear board and call it a day, because the 4 power that comes from Nested Ghoul is tapped as a result of having to regenerate all those times. So in effect, there's only 18 "usable" power at that point. You then need to do the following:

An alternative solution, however, allows you to deal more than 22 damage. "The key is realizing that we have to move Sadistic Glee to Triskelion and that we don't actually need Piracy Charm," Chris Billard writes. "The rest of our creatures provide everything that we need to start the loop that destroys all of Kent's creatures and moves Compelling Deterrence back to the top of our library. At that point, Sage of Fables lets us draw Compelling Deterrence again so that we that can bounce Kent's Ivory Mask and target him for the final damage:

At this point, you start the same loop -- with the exception that you're scrying Compelling Deterrence to the top of your deck instead of Piracy Charm. Eventually you'll end up with the Deterrence in hand and 19 power worth of attackers (one of which is a 1/1 Triskelion with nine +1/+1 counters on it). At that point: