You sigh. "No, this is going to take a while longer."

"We're going to be late for the movie," CJ says, looking at his watch. "Mari's going to kill us."

"If she knew what this game was like," you say, "she'd probably kill me if I conceded right now."

Your opponent slides her Merfolk Raiders toward the center of the table. "That phased in this turn, and I'm giving it the bonus from the Eidolon of Inspiration, so it's attacking as a 5/4 with islandwalk," Bonnie says.

"You're not throwing in your Kami of the Painted Road?" you ask. "I seem to recall you gave it protection from Blue when you re-cast your Blinking Spirit."

"Not since you cast that Mobile Garrison," Bonnie says. "Nice try, though."

"Okay, that puts me at eight life."

"She's not going to wait for us," CJ points out.

"The phasing's going to draw it out even more," CJ whines. "I really wanted to see those trailers, too."

You shake your head. This game is going a little too long for your liking, but you're on the verge of placing for one of the smaller prizes. Bonnie, on the other hand, isn't giving you any quarter: Despite her motley collection of cards, she's slowly taking chunks off your life total with her Merfolk Raiders. All in all, it's just another day with your local game store's Unabridged Cube.

"Okay, then," you say, "rubbernecking aside, are you done, Bonnie?"

"I can at least help with speeding this up," she says, and drops a Sphinx of the Guildpact on the table."

You and CJ are silent for a while. Then CJ pipes up: "Okay, that'll do it. So, do you want popcorn or what?"

"Thanks for the encouragement, CJ."

"That's my turn," Bonnie says. "You might need to play a little faster - your friend's probably going to explode if you keep him waiting any longer."

"What, CJ? He can wait a couple more turns. I'll do the thing with the Imagecrafter and the Wormfang Behemoth in response, by the way, so that's two damage to you."

"I'm at twelve," Bonnie sniffs. "Honestly, I don't think this is going to end in just a couple more turns. And I'm even assuming that you draw something good."

You finish untapping your permanents and draw a Legerdemain. Unfortunately the timing isn't quite right: Stealing Bonnie's Merfolk Raiders won't do you a whole lot of good at the moment, and you won't be able to use it to steal Bonnie's Sphinx. Otherwise this game would probably end a whole lot faster.

CJ's phone buzzes. "That's Mari," he says. "I think the lady wants some words with us."

"Uh... you might have left out a word there," CJ points out. "I didn't exactly hear you say you were packing up now."

"I just need a few more minutes," you say.

"We're going to be late for the movie!"

It is the start of your first main phase. Defeat Bonnie before the beginning of her next combat phase. 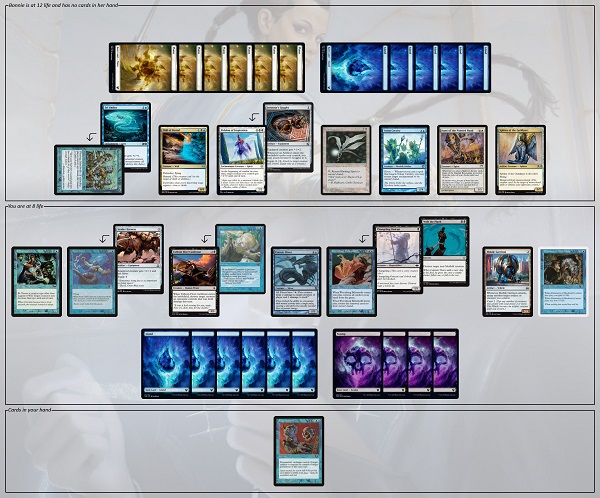 Bonnie is at 12 life and has no cards in her hand. She has the following cards in play:

Instead, if you think you've got a great solution, you can send your solution to puzzles@gatheringmagic.com with the subject line "Puzzle - Nine-Tenths of the Law" by 11:59 P.M. EST on Monday, March 16, 2020. We'll include the best ones in next week's article along with the next puzzle!

"Your biggest problem in this puzzle is that you're close to losing," Greg Dreher writes. "You don't have a single life point to give away, nor can you gain life. But fortunately, you have nine poison counters to give. So why not give them all?"

"It appears the key to this puzzle is to come really close to suicide by poison," Max Bernstein explains. "Really, the key is realizing that Infect damage replaces normal damage - thus letting you get hit without dying, but I digress."

"There's no possible way to reduce James's life total by 17," Jacob Butcher continues, "but it may be possible to give James ten poison counters:

"It's difficult to make Thorn Lieutenant create creatures, so Phyrexian Swarmlord must create many creatures. And that means giving ourselves many poison counters. Suddenly the drawbacks of Hasran Ogress and Orcish Artillery seem like advantages!"

"Hoisted by your own petard, darlin'," David adds.

"We had a bunch of steps to follow in this puzzle," Jonah Comstock writes, "and depending on whether James blocks our Ogress or not, we may have to do them in a slightly different order. But the general plan remains the same: Kill James with 10 poison counters, most of which come from Phyrexian Swarmlord's ability paired with Rampaging Ferocidon's trigger. It's James's Spirit of the Hearth that's forcing us into this roundabout plan, since Rampaging Ferocidon's ability is the only non-targeting option we have for damaging James.

"I got pretty stuck on this, thinking I had to find a way to get to 17 damage and coming up 6 short. Then when it finally dawned on me to end the turn with Glistening Oil on the dinosaur, it took some further fiddling to play the right game of musical auras with the Glistening Oil without running out of mana.

"On top of that, puzzles where I have to actually account for an opponent's choices always leave me with an extra layer of headache. But all this just made it a more rewarding solve in the end."