âAnd how would you describe the way Magic: The Gathering appeals to you?â

âYouâre pointing a recording device at me,â you say.

She smiles and turns it off. âIf Iâd had known that you were the nervous type,â she says, âI would have talked to those ladies at the next table.â

âIâm sorry. Itâs just that Iâve never been interviewed in the middle of a match beforeâ.â.â.âWhat did you say your name was, again?â

When your opponent said she had joined your tournament on assignment for the local news affiliate, you were willing to humor her. It turns out she had quite the decent deck and was giving your spell-heavy pool a bit of troubleâ.â.â.âbut you werenât exactly expecting the recording device.

âIf you want to focus on the game,â Whitney says, âwe can pick this up later. We still have some time.â

âYeah, that would help. Where were we again?â

âI cast Seasons Past,â she says, âand brought back four cards from my graveyard. Do you want to see them again?â

âNo, Iâm good,â you say, reaching for your notes.

âYou seemed worried about my Burn from Within, so you sacrificed the Clue tokens that you made from that 5-mana counterspell you playedâ.â.â.ââ

âYes, and we each ended with some cards in hand,â Whitney says. âYou spent a lot of time thinking about your draws, so I started asking you a few questions for my article. Then I brought out the recorderâ.â.â.ââ

âYeah,â you say. âSorry about that. Iâm just trying to think of how to play this.â

âWell,â Whitney says, âlike I said, we still have some time.â

You glance at the cards in your hand again and start untapping your lands. âItâs okay, I think. You can ask me those questions again.â

âRight,â she says, turning her recorder on once more. âAnd if youâre nervous, thatâs okay, too. So, again: How would you describe the way Magic: The Gathering appeals to you?â

You stare at the table. âBecause you get to see these really great plays,â you say. âLike the one Iâm about to make.â 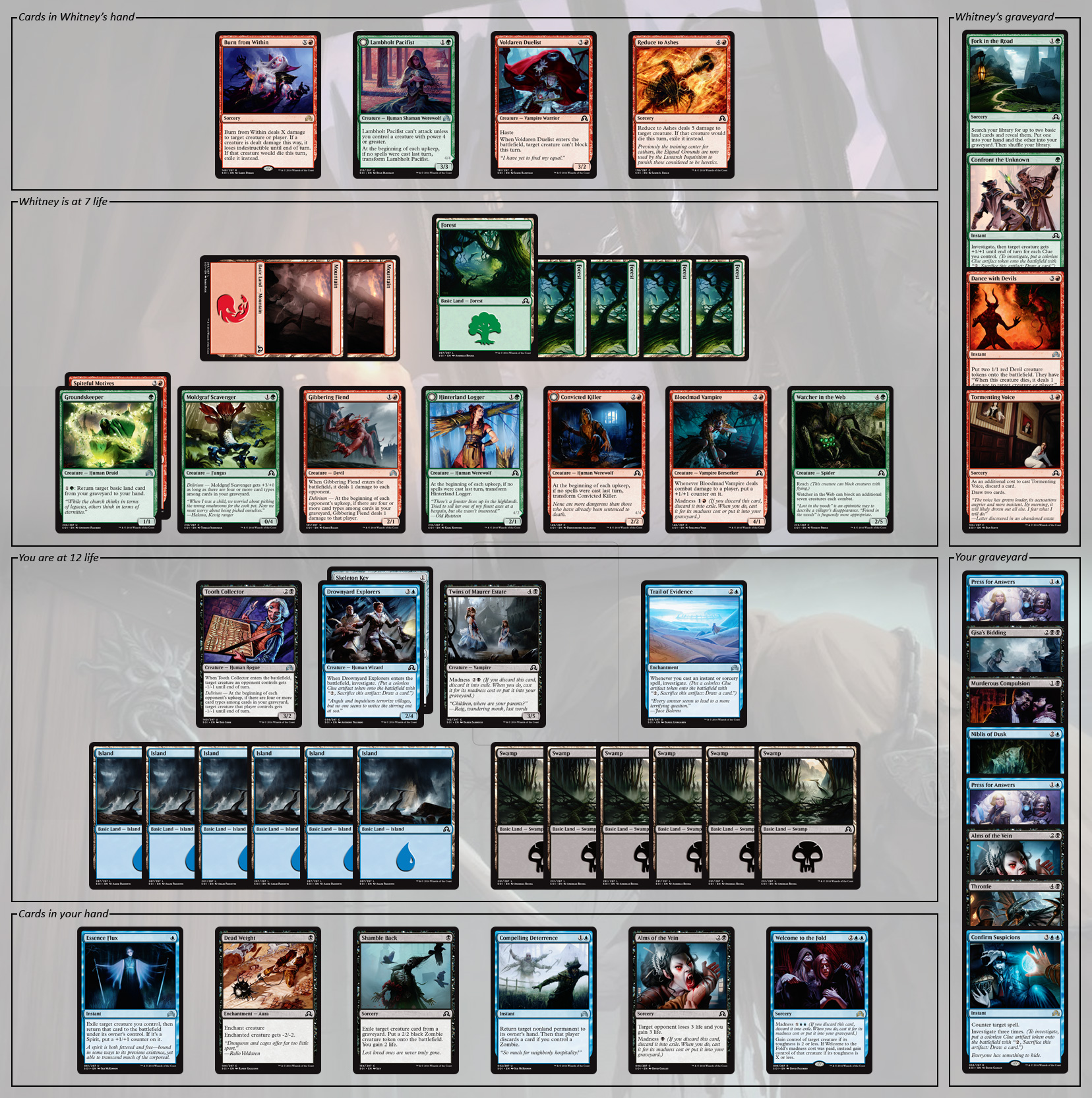 You are at 12 life with the following cards in play:

You do not know the identities of any of the cards that are currently on top of your library. After investigating your way into a lot of Clue tokens this game, you only have a few cards remaining in your library, but itâs enough for you to survive a few more turns.

Whitney is at 7 life. She has the following cards in play:

Whitney has the following cards in her hand, which she recently returned via Seasons Past:

Whitney has the following cards remaining in her graveyard:

If you think you have a great solution in mind, donât put it in the comments! Instead, send it to puzzles at gatheringmagic dot com with the subject line âPuzzle â Investigative Reportâ. Weâll include the best ones in next weekâs article along with the next puzzle!

A special mention should go to David Hillel, too: David points out that Ever After shouldnât be in your graveyard, as it is placed on the bottom of your library upon resolution. That said, this doesnât affect the puzzle: âIf you assume that the Ever After really is on the bottom of our library,â Andrew McLaren notes, âall you need to do to turn on delirium is sacrifice a land.â

In addition, Hyman Rosen and Tim Reinholz note that Anguished Unmaking can also give you delirium: You just need to cast it and then remove its target before resolution.

However, sacrificing a land seems to be the more promising avenue because you can use it to activate Pious Evangelâs ability. This kicks off Bohdan Yaremaâs solution:

Notably, this solution completely ignores the Anguished Unmaking in your hand. âNo wonder your opponent said he'd be happy with a draw,â Aaron Golas observes. âHe probably saw that he's dead on the board!â

However, Jordan Crittenden points out that we donât need to sacrifice Harvest Handâit works equally well as an extra attacker:

There are several points that make the above solution interesting, namely:

Curiously, a solution that uses Anguished Unmaking does exist, as Russell Jones demonstrates:

âI can't fault Darnell for misdirecting your attention toward the Hulking Devil and trying to get you to accept the draw,â Victor Munson muses. âThe writing was on the wall, even if it was mostly buried behind opaque card sleeve backs.â