Youâre in the deciding game of the last match of your Modern Masters 2015 Edition Booster Draft, and all eyes are now on you. Your opponent, Graeme, apparently drafted the majority of the removal spells at your table, and heâs been wiping out your bombs as quickly as you cast them. In addition to that, heâs managed to attach a Goblin War Paint to his Skyhunter Skirmisher, and youâre not sure how much longer you can survive a 3/3 flying double-striker.

You drew an Ulamog's Crusher on your last turn, so you figured that a possible alpha strike might be your best bet. You cast the Crusher along with a Smokebraider that was in your hand, setting up to Thrive all your creatures once the Crusher lost summoning sickness.

Graeme had other ideas, though: At the end of your turn, he cast Fiery Fall and Lightning Bolt to kill your Ulamog's Crusher. Then, he started his turn, drew and played a land, and tapped out to cast the last card in his hand: Iona, Shield of Emeria!

Now you officially have a problem. Iona and the Skyhunter Skirmisher will overwhelm your air defenses next turn, and your remaining creatures are too small to make it past Graemeâs blockers. Your deck isnât of much help either: Your draw this turn is a Blades of Velis Vel, which is useless in the face of Ionaâs no-red-spells restriction.

Youâre feeling rather frustrated about these developments, especially considering that Graeme is within striking distance at 8 life. There has to be a way you can break through!

It is the middle of your first main phase. Defeat Graeme this turn. 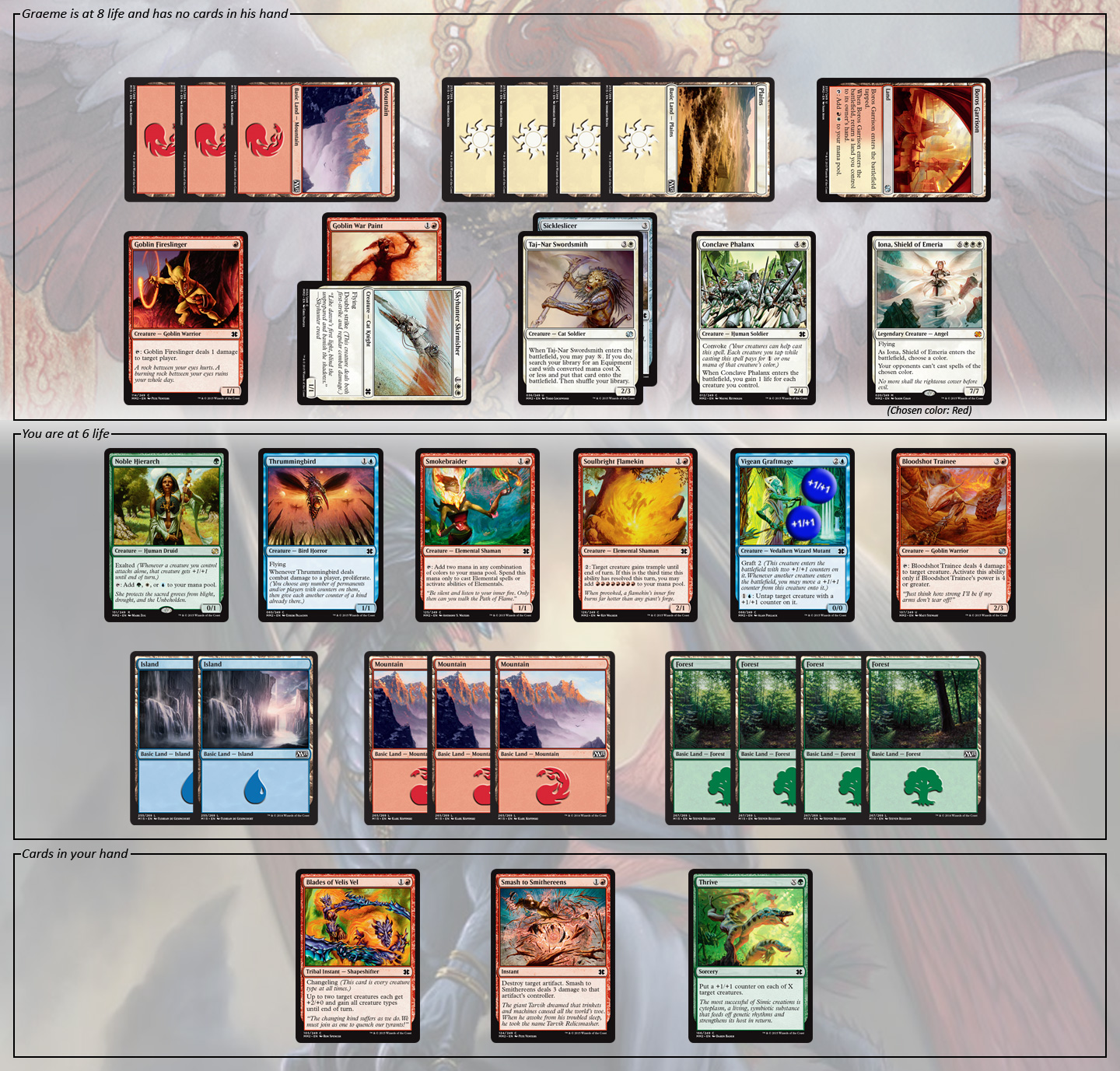 Graeme is at 8 life, has no cards in his hand, and has the following cards in play:

Graemeâs Goblin Fireslinger is without summoning sickness. Graeme has been tapping the Fireslinger for its ability at the end of each of your turns, and he will use it at the most appropriate time each turn.

If you think you have a great solution in mind, donât put it in the comments! Instead, send it to puzzles at gatheringmagic dot com with the subject line âPuzzle â Burning Brightâ. Weâll include the best ones in next weekâs article along with the next puzzle!

In his solution, Norman writes:

At first glance, it seems like there are two approachesâeither get rid of your Demon before your upkeep or gain enough life to survive. Unfortunately, none of your removal is suitable for the task of killing the Demon, and your only sacrifice outlet is Victimize, a sorceryâif you could survive long enough to cast it, you should be able to win some other way. Fortunately, you do have some incidental life-gain available, so the second approach is more viable.

One of the puzzleâs sticking points was Necromancer's Magemark, the relevant abilities of which read:

Creatures you control that are enchanted get +1/+1.

If a creature you control that's enchanted would die, return it to its owner's hand instead.

This results in several implications: First, the Mosquito Guard is currently a 3/3 because it gains an additional +1/+1 from the Magemark. (This explains why the Mosquito Guard hasnât died from the 2 damage on it and why it is not a legal target for Last Breath at the moment.) Second, if either the Mosquito Guard or the Sengir Bats would die while the Magemark is in play, it would return to your hand instead of being placed in your graveyardâand not triggering Soul Net in the process.

With this in mind, Max concludes: âThis points us to two sub-problems: Putting three black cards into our graveyard to take advantage of the alternate cost on Spinning Darkness and having enough creatures to target with the life-gain spells.â

Flakey identifies one creature as the key to surviving: âTo get out of this bind, you are going to have to allow your Kithkin Spellduster to die for your sinsâ.â.â.âmultiple times.â

Thomas writes out a more detailed solution as follows:

Before End of Turn:

During your upkeep, while Archdemon of Greed's trigger is on the stack:

Several other solutions mentioned the possibility of casting Spinning Darkness on Kithkin Spellduster and then casting Last Breath on it while Darkness is on the stack. However, this move doesnât work as expected: When the stack resolves, Last Breath does exile the Spellduster (and gains you 4 life), but Spinning Darkness then fails to find a target and is countered (losing the effect of gaining 3 life).

Whatever the case, Zeldaâs move was a subtle one and would have won her the game if you had not figured out a way to deal with your own Archdemon. JoÃ£o sums it all up:

I am sure Zelda passed priority with a smile on her face.

If I get through my upkeep alive with one Plains untapped, I win.

I got through my upkeep alive with one Plains untapped.

Zelda is now not smiling.